Rows of lamplights and swirling fog set the stage for a horrifying and brutal tale exploring the very psyche of what it means to be human. It’s an endless fight between the duality and multiplicity of identity. The battle between good and evil, light and dark, old and new technology. Director Kip Williams along with The Sydney Theatre Company takes the audience on a spiralling descent into the seamy underbelly of Victorian London in his latest ‘cine-theatre’ production: Strange Case of Dr Jekyll and Mr Hyde.

We are well-aware of the twist before the play begins as Robert Louis Stevenson’s nineteenth century novella occupies prime position in our collective subconscious. With a noir-style black and white camera feed and minimalist set we are introduced to Gabriel John Utterson, played by Matthew Backer, a mild-tempered lawyer and friend to Jekyll. Utterson is our window into the mystery and Backer is the flawless guide and beating heart of the show. Ewen Leslie is our upstanding Doctor Jekyll and monstrous Hyde. His performance is chilling as his face reshapes and transforms between the two radical extremes. 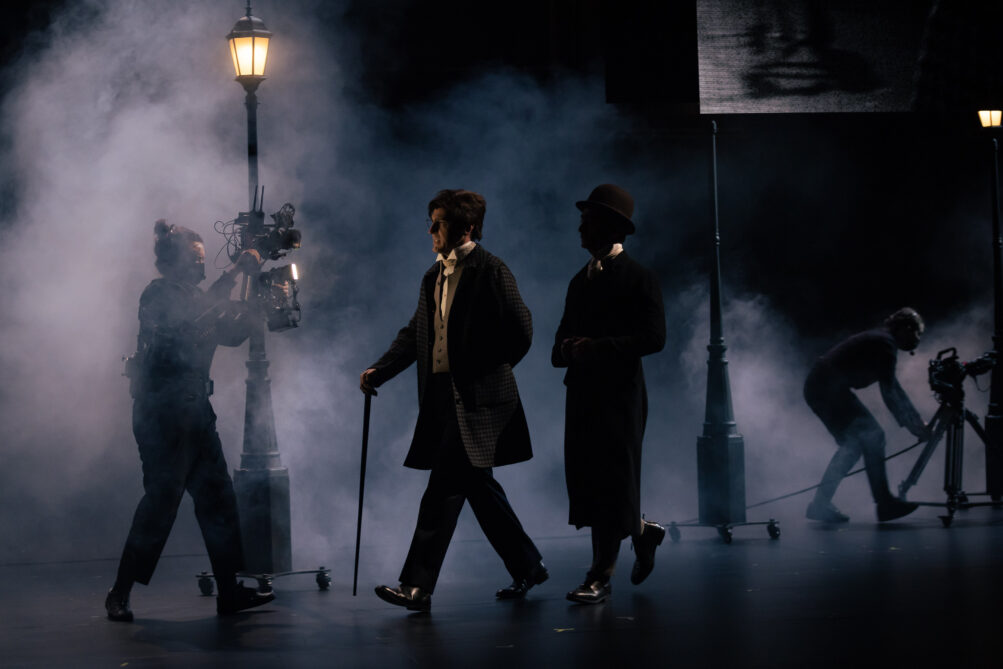 The two actors trade paragraphs narrated in third person in a quick, urgent, and rhythmic pace. Despite the overwhelming, and somewhat heavy dialogue albeit impressive. Both Backer and Leslie handle the constant barrage of  words with ease. Williams perfectly demonstrates his mastery with a seductive mix of live performance, filmed action, and recorded video. It’s the interaction between the multiple moving screens that provides a constant movement and dizzying illusion to the otherwise heavy dialogue.

Camera operators weave across the stage with an almost impossible fleetness in a choreographed dance with the actors, crew, operators, and assistance to give the audience a glimpse of what lies in the shadows and behind closed doors. It flows seamlessly, unobtrusively, and efficiently and thereby manipulates our perception, pulling us even deeper into the mystery.

The production is a carefully curated choice of framing and composition as one screen turns into two, and then three, and at one point six. At times several screens are taken up by a single mouth. While in another instance Utterson appears alone in one screen surrounded by four mirrored Hydes. It’s phenomenal. The screens were a masterful act of trickery. The screens have a theatrical merit and it was displayed when the actors appeared to tiptoe up a huge staircase conjured on the stage. It was a moment that produced audible gasps of delight from the audience. 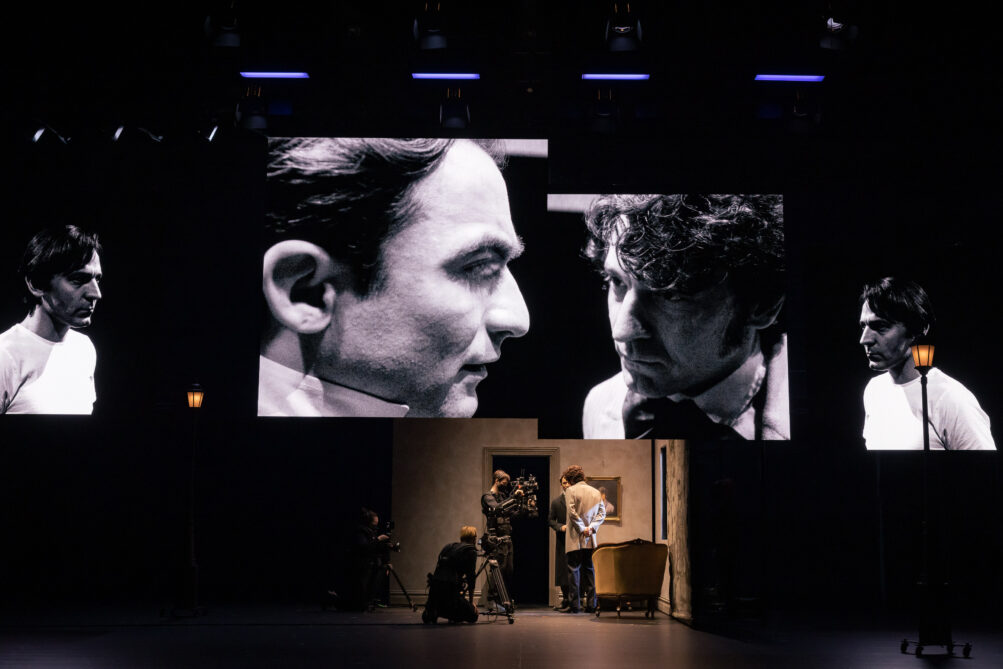 We find ourselves unravelling and falling down the rabbit hole of mystery. The suspense keeps us tightly wound as we teeter  on the edge of discovery. Composer Clemence Williams sustains a creeping horror and intense mood throughout the play. Her compositions are the perfect blend of suspense and intrigue. Her score contains open-ended musical phrases that remain unresolved. It’s the missing resolution in the music that creates a sense of the unknown. Williams perfectly embodies the feeling of fear – keeping us on the edge of our seats.

Strange Case of Dr Jekyll and Mr Hyde runs for two hours 1 hour and 50 minutes (no intermission) and plays at The Rosyln Packer Theatre Sydney through 10 September 2022. Buy tickets now. The venue is accessible.

It’s a twin thing: Bell Shakespeare delivers double the laughs in The Comedy of Errors