In an unbelievably implausible set of coincidences two sets of identical twins end up on the same island after a three-decade long separation. Bell Shakespeare’s The Comedy of Errors sets a 1970’s-inspired discotheque stage for one of the English-speaking world’s earliest farces. It’s an absurdly funny romp where even the wildest happenchance is a possibility.

It’s a precarious task to try and explain the plot without falling into one of its confusing pitfalls. There’s two sets of twins who are identical in DNA, dress, and name. Confusing, right? A merchant, Egeon (Maitland Schnaars) and his wife Emilia (Leilani loau) have identical twin boys both named Antipholus who are served by a set of identical twins named Dromio. As a twin myself, who is often referred to as ‘one of the twins’, I instantly loved the premise. 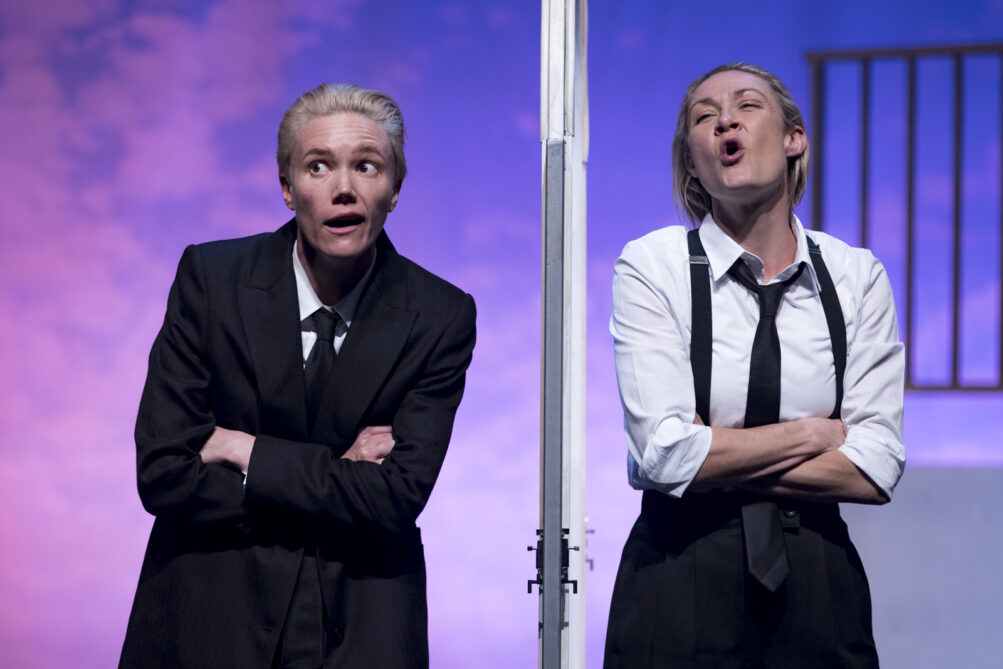 In a dark start to the play Egeon describes his plight to find his sons in an emphatically long-winded monologue. The actors play out Egeon’s story with an effective slow-motion depiction of the shipwreck. It’s an ingenious move by Director and long-time Bell Shakespeare collaborator Janine Watson. The entire cast is introduced through the silent retelling. It allows the audience an opportunity to become familiar with the characters.

Evidently, Shakespeare sets up a life-and-death scenario for poor Egeon who has committed a capital crime by landing in Ephesus. We naturally empathise with the devastated father. Alex King, who plays the Duke, is a key figure in setting the tone in the introduction. Maitland and King unfortunately miss the mark in building the tension needed to contrast the comedy that follows. Their compelling stage presence though is a saving grace.

However, Watson salvages the introduction by cutting the melodrama with a 70’s dance routine choreographed by Samantha Chester. It lands fabulously with cheers and roars from the audience. The 70’s dance routines cleverly disguise the actors while they revamp the set. It’s playful, entertaining and moreover it works incredibly well. Hugh O’Connor’s costume and set design choices, namely; bright colours, flares, palm trees, neon signs, and mirror balls are the perfect match for this absurd play. 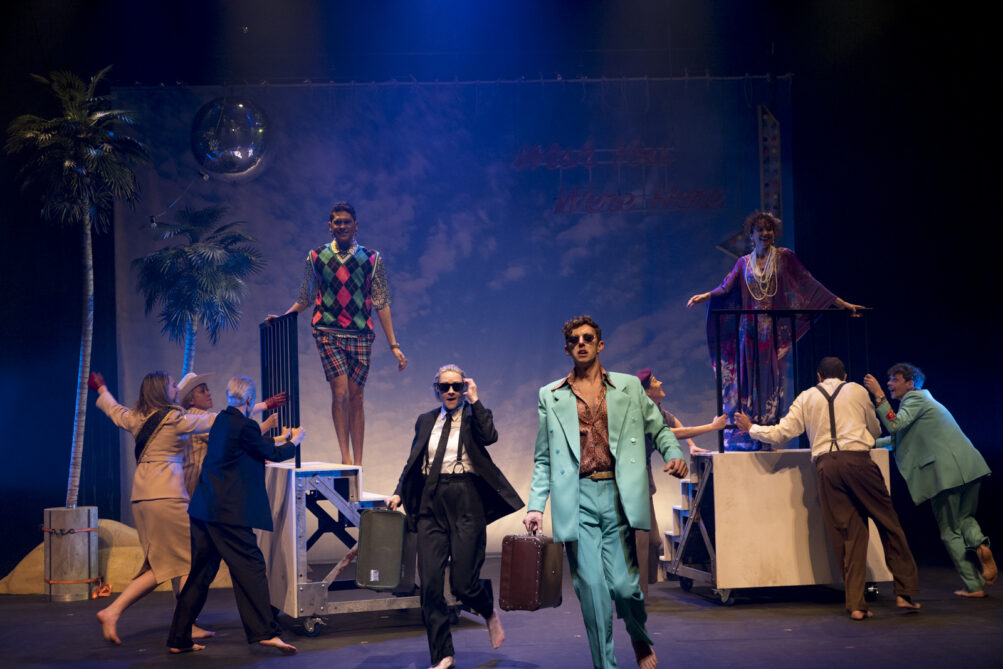 The Syracusan Antipholus (Skyler Ellis) and Dromio (Julia Billington) are an utterly charming pairing in their naivety and confusion. Their Ephesian equivalents, Felix Jozeps and Ella Prince are just as enchanting. Billington is without a doubt the standout; breaking the fourth wall early with perfect comedic timing. During the play she is constantly in motion, strutting across the stage with a wicked sense of mischief.

The decision to use a double-sided mirror with Dromio on either side of Antipholus’ locked front door is brilliant. The effect drew a chorus of ‘oohs’ and ‘aahs’ from the audience. Watson does well with the awkward rhyming dialogue by contrasting it with a quick-paced barrage of on-the-nose situational humour. Her casting of women as Dromio ultimately pays homage to Shakespeare’s exploration of gender. Likewise, Watson changes Luciana to Luciano and casts Joseph “Wunujaka” Althouse.

In essence, Bell Shakespeare’s The Comedy of Errors is a simple, inherently silly play that doesn’t pretend to be anything deeper. The play is full of chaotic mishaps, slapstick fights, misguided love, and mistaken imprisonment. It’s undeniably silly, delightful and its double – I mean, quadruple – the laughs.

The Comedy of Errors runs for 2 hours (including 20 min interval)  and plays at The Sydney Opera House  Packer Theatre Sydney through 17 September 2022. Buy tickets now. The venue is accessible.

A theatrical feast to satisfy the monster within: Strange Case of Dr Jekyll and Mr Hyde