Handa Opera on Sydney Harbour present The Phantom of the Opera 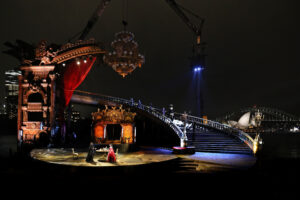 Now, that was just what the doctor ordered! After repeated bouts of illness, extended isolation, resultant depression, and financial stress, what many of us have needed for quite some time is a good dose of the spectacular and the divine. Enter The Phantom of the Opera. And on Sydney Harbour, no less.

There could be no more legendery piece to present in such an iconic location than the world’s most popular musical, the longest-running show in musical history, decorated with every award known to man. Full to the brim with power, passion, and pathos in every song and every character, Phantom is cultural soul food.

Andrew Lloyd Webber’s score is literally hit after hit, each more intoxicating than the last. Luscious love duets have us soaring the heavens. Grand, fantastical party tunes sweep us into a dizzying epicurean tilt. The electrifying marriage of symphony orchestra with rock band thunders us into a chromatic descent to the gothic horror of the eponymous villain’s hellish lair.

For anyone who has to date somehow managed to avoid seeing Phantom in any stage or film incarnation, this new production will pack the punch and shoot the thrill that a first viewing of something great should do. It will be an unforgettable moment by which to measure all future theatre experiences.

For everyone else who already has their own personal connection with Phantom – perhaps, like me, having grown up with the soundtrack playing in their home – what a wonderful opportunity it is to escape reality and relive a dearly beloved memory. Even if your Phantom reference point is the peerless Michael Crawford and Sarah Brightman powerhouse of the original cast, there is little, if anything, to disappoint in this triumphant new production.

Joshua Robson does indeed have a touch of the Michael Crawford to his rich, deep tenor. When it booms from the opera house wings and rafters, it is fearsome and ominous, yet intriguing and seductive. Later it crumbles and quivers with broken vulnerability, almost engendering empathy for his loathsome character.

Georgina Hopson sings Christine Daaé with beauty, clarity and emotion. She, like her character, begins a little shakily, but as the action progresses, she gains in confidence until she seems to fully come into her own in her solo “Wishing You were Somehow Here Again”.

Callum Francis gives us a likeable Raoul, though his voice somewhat lacks resonance. Naomi Johns as primadonna Carlotta, Paul Tabone as Piangi, Michael Cormick as Monsieur Firmin and Martin Crewes as Monsieur André all expertly bring out the witty comedy of their roles.

A few opening night teething problems with microphones and speakers aside, the sound levels are well balanced between live below-stage orchestra and on-stage vocalists. 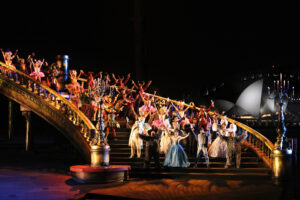 Director Simon Phillips together with set and costume designer Gabriela Tylesova have collaborated to create a mind-blowing experience for the eyes as much as the ears. The harbour stage is almost 2.5 times larger than any other indoor stage in Australia. The set, which includes a majestic curved staircase, is covered in 10km of gold foil. Seven-metre-long gondolas float along the moat which encircles the stage and which features prominently in the plot. This is an authentic detail, as there really is a lake coursing underneath the Paris Opera House. Likewise, an enormous centrepiece chandelier strung with 80 light bulbs replicates the original at Paris Opera Garnier. A long-armed crane suspends it high in the sky above the stage. At the climactic moment that it crashes to the floor at the end of the first half, the synchronisiation of fireworks over the harbour couldn’t be more perfect, making up for the lack of shock-factor of the very gentle let-down on opening night. There is no shortage of “oohs” and “aahs” from the audience when the moat bursts into flames. The costumes of the entire singing and dancing cast are lush and elaborate.

Opening night was a roaring success on every level, down to the fact that the rain which bucketed down pre and post-show mercifully stopped for the almost 3 hour duration. Pro tip: take your raincoat just in case, as well as paper towels to wipe down your seat.

Handa Opera on Sydney Harbour present The Phantom of the Opera at Fleet Steps, Mrs Macquarie’s Point until April 24.

Alicia was an invited guest of Opera Australia.

Stay Woke: Are you woke or not woke enough?