A young woman lies dead at the hands of her new husband in a shocking murder-suicide. Jealousy and domestic violence were issues in Shakespeare’s day, 400 years ago, still present in Verdi’s day, 150 years ago, and are sadly as relevant as ever in our day.

Verdi’s operatic translation of Shakespeare’s tragic play Othello is currently showing at the Opera House, bringing these issues to centre stage. The production, like the music, is strikingly impressive; the story gripping from start to finish.

There is one single set for all four acts: a massive black and red staircase that dominates the entire stage. Although this is a point of some disappointment later on, when there is no change at each curtain rise, it certainly makes a big impact in Act One, Scene One. 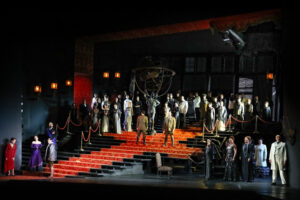 Verdi’s opera music is always dramatic, lyrical and romantic, and the score of Otello is even larger than expected. It opens with a rapidly building storm at sea. The lightning and thunder of the brass and percussion are matched by the epic volume produced by the mass of some 30 chorus members on stage at once, belting out their best fortissimo sforzando. It is simply a huge sound, which in combination with an immense set, overwhelms the senses in a way that only opera can do. At the same time, the score of Otello does calm back down and includes some very beautiful arias and duets.

The three lead characters Otello, Desdemona and Iago very heavily dominate the drama. The Opera Australia principals who reprise these roles bring the needed force and depth. Tenor Yonghoon Lee gives a powerful performance as the fatally flawed Otello who is overcome by the “green-eyed monster”. Soprano Karah Son gives us a vivid, earnest Desdemona, pure but not fading. She delivers her two back-to-back arias, the “Willow Song” and “Ave Maria” exquisitely, with much feeling and resonance. Baritone Marco Vratogna is the conspiring, Satan-invoking “honest” Iago, and does manage to make his character at once despicable and yet fascinatingly appealing, which is the wonder in Shakespeare’s characterisation. 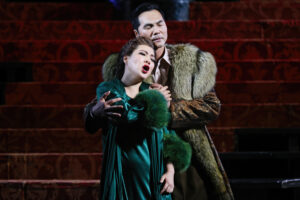 Sometimes the reality of opera is that the music, set and costumes may be incredible but the story lacks depth and modern relevance. This is what causes many to conclude that opera is boring or just feels really long. Well, when the drama is written by the greatest playwright the world has ever known, suffice it to say that this is not the case. The two and a half hours of Otello pass as a mere moment. The action is engaging and fast-paced. The central characters distill qualities, both good and bad, that are the essence of human nature. The intimate tensions and complex dynamics between the characters could to some extent reflect our very own relationships. And the issues addressed are the problems of our world today. It is good to see a lot of the classic, pithy phrases from Shakespeare’s play maintained in the libretto.

One notable directorial decision in this production was hiding nearly all signs of physical violence. The sword fight that results in Cassio losing favour in the eyes of Otello takes place off stage. We see Montano covered in blood, but do not witness the struggle itself. Likewise, when Otello kills Desdemona in a jealous rage, they are under the giant staircase, hidden from view. We see Desdemona crawl out to die, but miss the actual scene, which is supposed to iconically happen in the marital bed. We hear Iago convince Otello that he should strangle her in their bed, but with no bed on stage, this is not to be. This decision somewhat sanitises the show, making it perhaps more palatable for some and more appropriate for minors in the audience, but it does also serve to mute the theme of domestic violence.

Those are small gripes, however, in what is an overall impressive and enjoyable production. Another success in Opera Australia’s much awaited 2022 season.