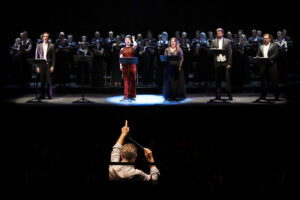 OK, first things first.  For those of us who are not operatic doyens, “In Concert” means performed as a recital rather than a play.  So no Tudor sets.  No wigs, crowns or cod-pieces.  No banners, scaffold or axe.  Rather than act, the soloists perform in formal attire at music stands with the choir dressed in black in rows of chairs behind them.  The audience needs to pay particular attention to the surtitles in order to follow the action.

Secondly, this is not the Mary Queen of Scots story we were taught in British history.  Be prepared for a continental European rendition, where the tragic treasonist is actually a Catholic saint martyred by a jealous and vengeful Protestant tyrant.  Only an early-19th century Italian account would echo the sentiment that God will punish England for her disloyalty, as the chorus canonises Elizabeth’s beautiful regal cousin.

Now, as for Opera Australia’s performance of Gaetano Donizetti’s Maria Stuarda . . .  In a word, it was wonderful!  This classic “bel canto” opera provides a showcase for the amazing capabilities of the human voice.  The arias and duets are both simple and complex, as they gyrate in tempo and range.  The orchestra paints the scenes with dramatic effect; one moment a spring garden, next a royal hunt, then a powder-keg signal for the axe to fall.

The principals all gave strong performances.  Olga Peretyatkowas captivating in the title role and her execution (forgive the pun) of the high and extended notes was flawless.  Carmen Topciu’s voice captured the pride and vindictiveness of the Virgin Queen, with minimal empathy engendered for the moral dilemma of filial regicide.  As the romantic tenor, Valerio Borgioni gave impassioned expression to Maria’s pathetic lover, Leicester, who hopelessly misreads the impact his appeals for clemency will have on the jealous Elizabeth.

The lesser roles of Cecil, Talbot and Anna were all delivered competently; although Shane Lowrencev’s bass was so low as to make the lyrics practically unintelligible.  The choir was heavenly in power and purity, as well as essential in outlining the plot and describing the scene. Renato Palumbo’s orchestra was rich and deep, keeping us all alert.

So just as a blind person’s sense of hearing is heightened to compensate for the loss of sight, get along to the Sydney Opera House for Maria Stuarda in Concert and close your eyes.  Let your imagination do the work, as there is nothing on-stage to distract you.  Don’t worry about the surtitles, lest the facts get in the way of a good story.  Just listen, to experience the art of “beautiful singing”. Oh but be quick; This is a short run of only two performances. The second and final show is this Friday evening!

Maria Stuarda in Concert is showing at Sydney Opera House on 25 March, 2022.