After a year of cancelled events, zoom trivia nights, and a severe lack of alcohol, going to GABS 2021 felt like a breath of fresh air. In Olympic Park’s massive showground in Sydney’s West, several beer, cider, and street food businesses had set up shop to showcase their creations in Australia’s biggest and most beloved Craft Beer and Cider Festival.

Adorned with fairy lights, colourful lanterns, and (my personal favourite) – a sculpture made of kegs spelling out ‘GABS’ at the entrance, the festival marked the return of Sydney’s event culture, bustling with craft beer fans from all over Sydney. We started the evening by heading straight to the back of the hall, where I bought a delicious haloumi pita from the Lambda Souvla Grill truck, before immediately making for one of the container bars to get our hands on some of GABS’ iconic tasting paddles. 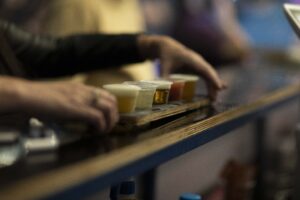 Each paddle provided us with a degustation of five different beers of our choice, allowing us to scope out which flavours and notes we liked best. Whether it was flavours of rice bubbles, hints of wasabi, or notes of chai, each small taste provided a unique snapshot into the genius minds of Australia’s best breweries.

What I loved most about the container bars was the helpful and clear categorisation of each drink, and particularly the fact that they pointed out which drinks were for beginners, and which were more adventurous. My favourite was definitely Basement Brewhouse’s Strawberry and Coconut IPA, which I had a taste of in one of our paddles, and then just had to go back for a full glass.

GABS had the entertainment covered, too. My favourite non-beer related attraction was the live marching band parading the hall while pumping out classics like ‘Don’t Stop Believing’, heightening the sense of cheer and wonder that was already radiating inside.

GABS has mastered the art of the festival: there was not a corner inside that was not bursting with activity and excitement. If you’re a craft beer fanatic, a food lover, or a general enjoyer of fun things, don’t miss it!

– Anoushka
Anoushka Anupindi is a student at UNSW who loves food, comedy, and all things music.

GABS Craft Beer and Cider Festival is making its way down to Melbourne from 21- 22 May 2021, and then over to Brisbane in June. Make sure you don’t miss it and get your tickets now. Venues are accessible by wheelchair. Social distancing was adhered to in this event.

Disclosure: The Plus Ones were invited guests of GABS and Rocket Communications.

Brunch, Bubbles, and Beats: Since I Left You’s Bottomless Brunch with Arona Mane

‘The Little Prince’ at The Sydney Opera House