You know the art gallery launch is going to be good with the artist has a PR agency. St Ali stormed onto the Sydney art scene with the second series of his inaugural art collection.

‘Art is what passion looks like’ was the tagline of the night for the launch of The Saint’s inaugural collection, ‘An Homage to the Divine Feminine’, and it couldn’t have been truer. 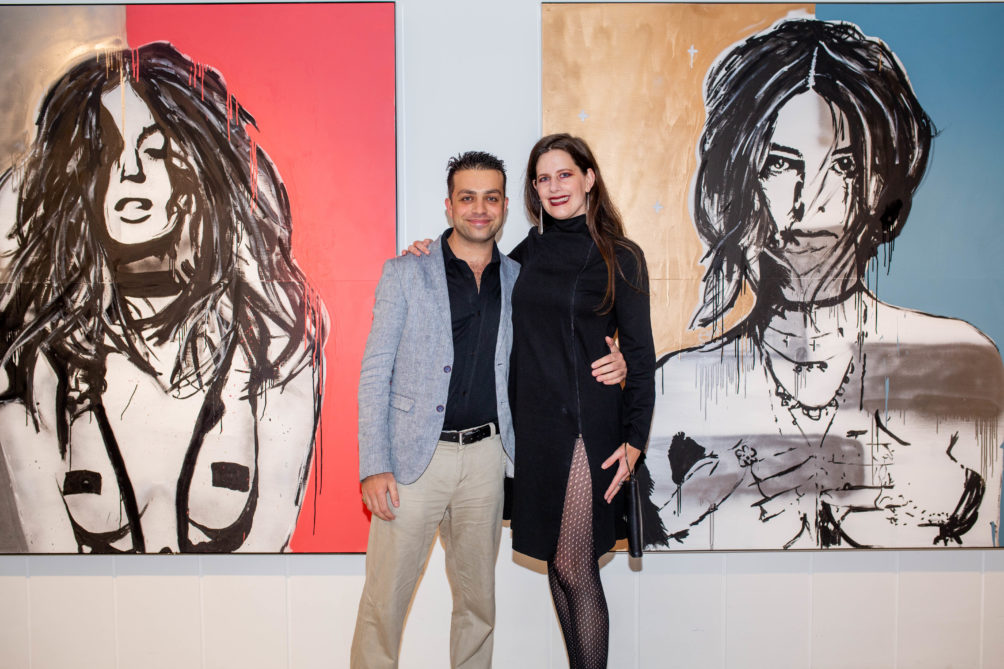 The Plus Ones’ co-founder Theresa and friend

Held at a pop-up location, from the second we entered my +1 (and +2) and I were treated like royalty. Over to William Street in Darlinghurst, past the friendly bouncer, up the stairs, and into a world of beautiful art, endless drinks, and gorgeous attendees of all ages, ethnicities, and genders.

The white walls and ceiling of the gallery perfectly showed off St Ali’s work: a bit of classical, a bit of punk — all bright and engaging. And they’re huge! His paintings of Aussie notables like Ruby Rose, alongside titans of the fashion world such as Karl Lagerfeld, were practically the size of the guests. (And also made for perfect photo ops — this guy knows what he’s doing.)

Greek statues with eyes covered in licks of bright spray paint were positioned next to Warhol-esque paintings of women, x’s over their nipples. It was all so fun, so fresh. 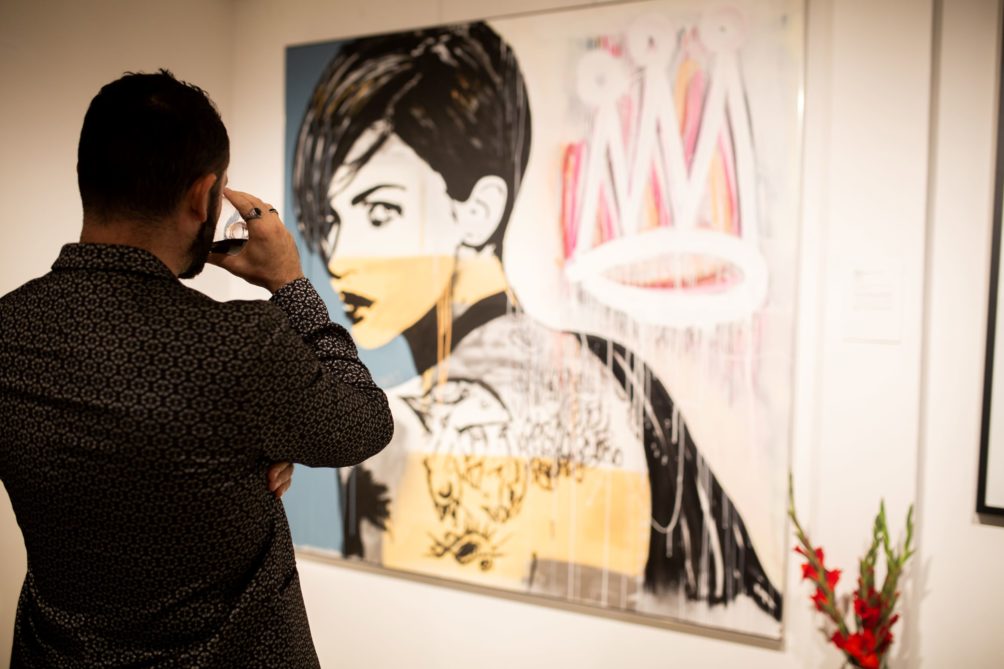 Playful touches abounded: there were ‘fire extinguishers’ painted like Evian bottles, which guests used as props, to their delight. A tailored suit took centre stage, mixed with shoes that were spray-painted. A bit of the urban, a bit of the modern, a bit of flair — that’s St. Ali’s collection in a nutshell.

St Ali gave a heartfelt speech, with a rousing cheer at the end, about his journey to success. He had a steady corporate career, but always had an artistic side — his friends would admire his artwork in his apartment. He said it ‘took a while to build up the courage’ to give it his all. But now look at his success. 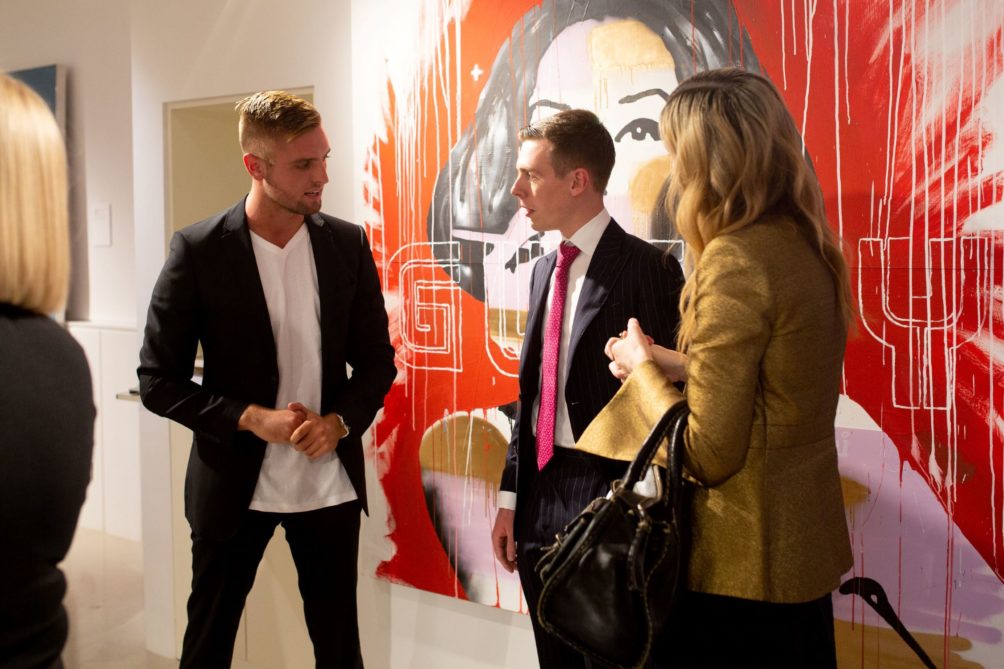 The Plus Ones are no strangers to launch parties or art events — so we’re not joking when we say that this, hosted by No Comment Media, was one of the best launches we’ve been to. With drinks by Vinaceous Wines, and canapes from Bibo Wine Bar in Double Bay, what really stood out was that the waitstaff were having as much fun as the guests. That’s not something you see often, but it makes such a difference to know that every single person in the room is enjoying themselves.

The party spilled outside into the laneway, with more St Ali art hanging on a sandstone wall over a luxury car (because why not — it’s Sydney!). Guests playfully posed with the fire extinguishers, before heading to the afterparty up the road at Tatler. 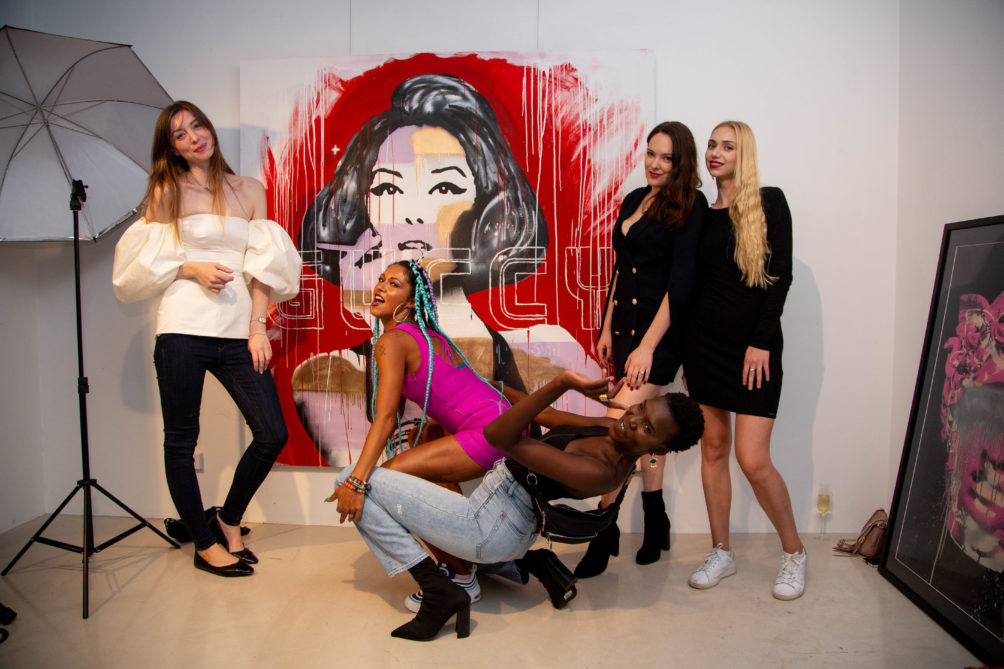 St Ali is super talented, has a huge and loyal fanbase already — and he’s only done one collection. The full exhibition will be shown in June — stay tuned for more from Sydney’s most exciting new artist!