Every now and then, a show comes along that blows all your preconceptions out of the water. ‘Pigalle’ is one of those shows. A cabaret-circus-music-burlesque extravaganza, it’s the centrepiece of Sydney Festival‘s Festival Gardens programming in Hyde Park.

We’re huge fans of burlesque and cabaret variety shows at The Plus Ones, so I thought I knew what I was in for. A bit of singing, a bit of circus, a bit of stripteasing. ‘Pigalle’ has all of those elements, but combines them into a 1970s disco super-spectacular.

The show is held at the Magic Mirrors Spiegeltent in the Festival Gardens in Hyde Park. With open seating, you’re let into the Spiegeltent based on your wristband’s colour. Pushing past the scrum and dashing in to find a good seat added to the excitement of the show, with pre-entertainment by a fabulous DJ. Right on schedule, the lights turned off and the 70-minute show began.

Each of the cast members is a multi-talented powerhouse. Who knew that people who are so adept at using their bodies for circus also happen to be amazing singers? Or that violinists just so happen to be good at fire-swallowing? Whoever the casting director is who found all these multi-hyphenates, they should be commended. 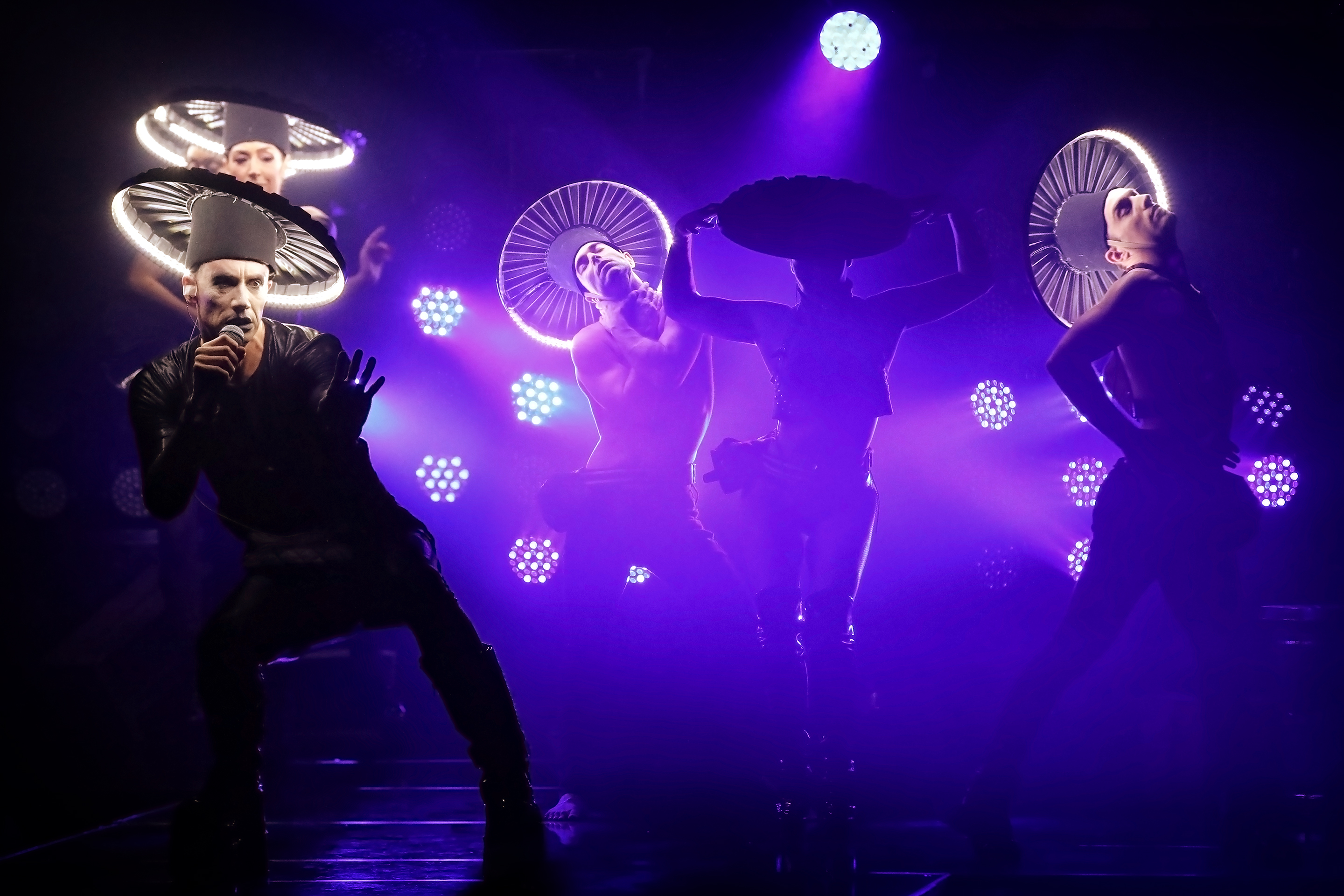 The show is divided into separate short acts, which works perfectly to build the energy to a crescendo at times. It’s balanced by acts that bring the energy down a little bit, such as the dance pieces by Aboriginal and Torres Straight Islander Waangenga Blanco. While the modern dance pieces weren’t to my taste, my plus one was enamoured of his creativity and expressiveness. Is he the show’s narrator? It’s heart and soul? It’s not entirely clear — but with a variety of acts to entertain, there’s something for everyone.

My absolute favourite act was by Yammel Rodriguez, an aerial artist from Mexico, at the start of the show. I’ve seen a lot of circus in the past, but never before anyone performing single strap in thigh-high patent leather high heeled boots. Her artistry, combined with the sexiness of her costume, enraptured the audience. 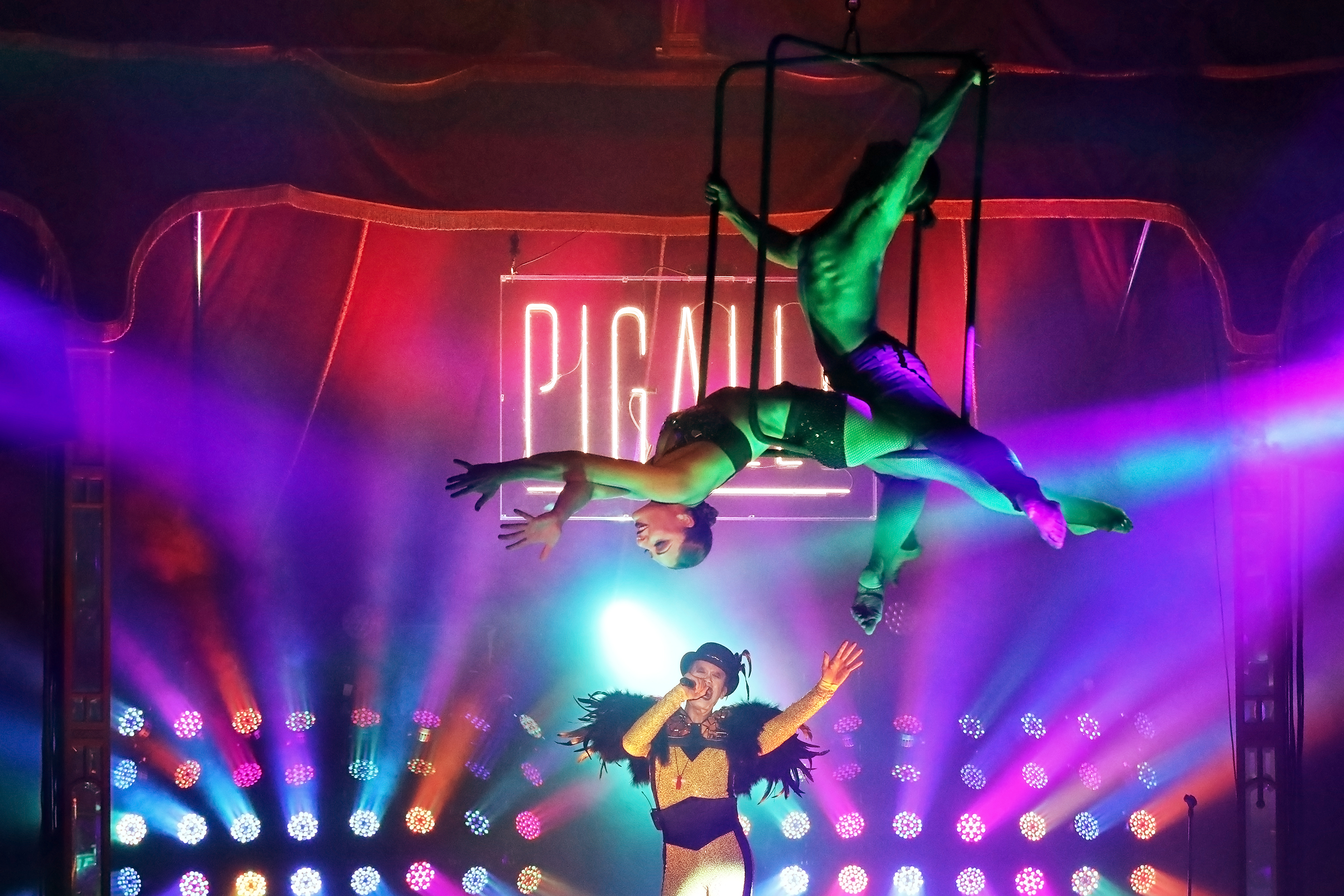 It’s hard not to single out every single person in the show, which runs from singer iOTA performing in outlandishly fun outfits, to choreographed dancing by multi-hyphenates Chaska Halliday and Zachary Webster. A standout is Hugo Desmarais, whose circus performance with the aforementioned Yammel Rodriguez is divine, and whose repartee with the audience left everyone in giggles. (Hint: sit in the front row and hope he picks you as his favourite).

My other knockout star of the show is Kathryn Louise McLaughlin, aka ‘Kitty Bang Bang’. Her first burlesque performance is a ribald classic that could have fit in anywhere in the the last 100 years — a compliment, by the by. But her fire-twirling is where she really, er, shines. (Another hint: keep an eye on her assistant, Sonja Schebeck — she ain’t just a violinist). 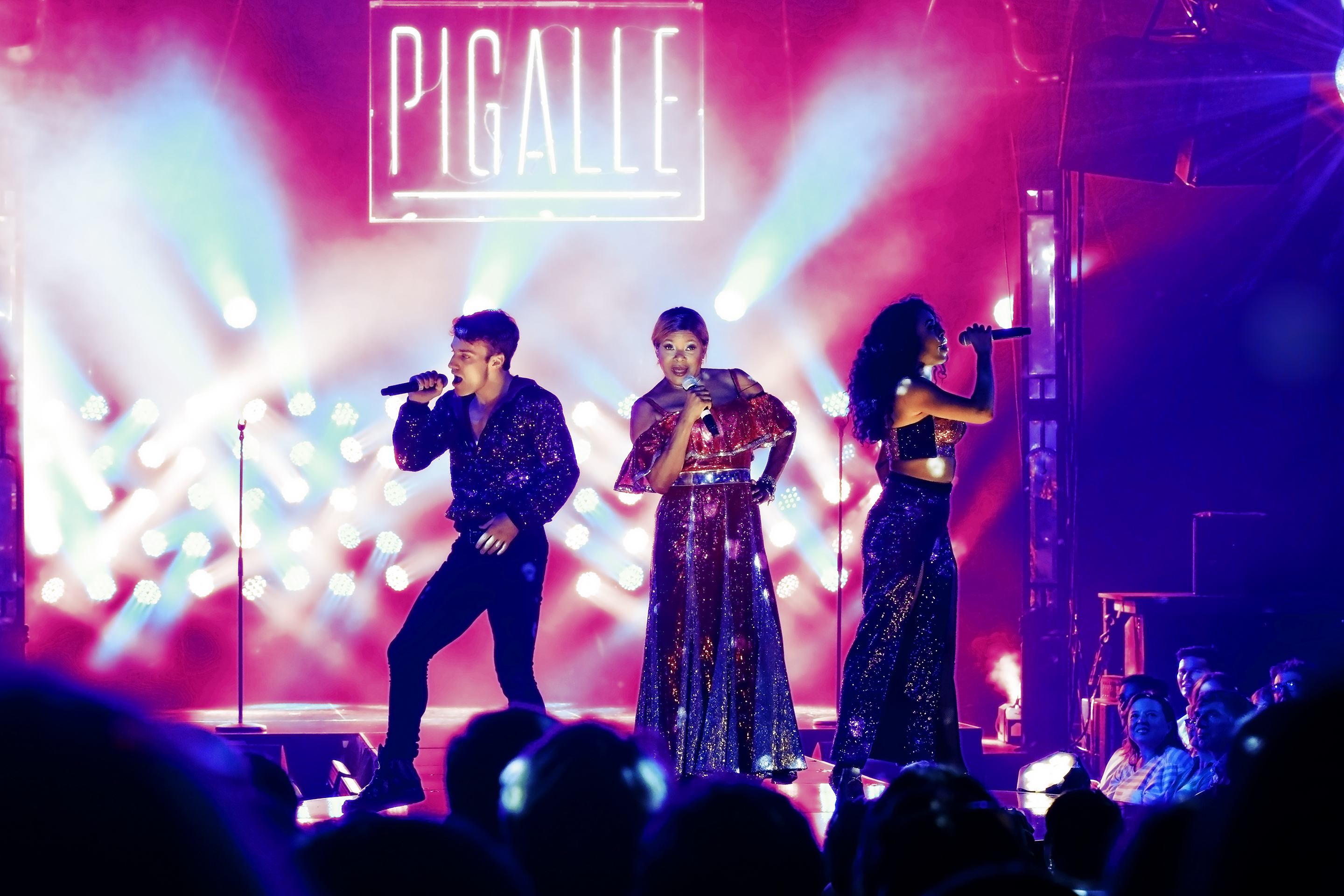 Of course, I can’t finish the review without acknowledging disco queen Marcia Hines. Belting out 70s classics like ‘Don’t Leave Me This Way’ and ‘You Make Me Feel (Mighty Real)’, she holds the audience’s attention every minute she’s on stage. Duets with iOTA are particularly fun.
Every minute is entertaining, the cast is superb, and it ranges from heartfelt to hilarious — the perfect combination for the Spiegeltent. ‘Pigalle’ finishes at the perfect time — just when you still want a little more.

– Theresa
Co-founder of The Plus Ones, Theresa loves thinking about how many generations of people have been entertained by the artforms in Pigalle. Follow her on her Instagram.

Read The Plus Ones’ guide to the best of the 2019 Sydney Festival, and read all our coverage.

Disclosure: The Plus Ones were invited guests of Sydney Festival.
Image credit: Prudence Upton.

‘HOME’ – a kinetic display of absurdism at Sydney Festival