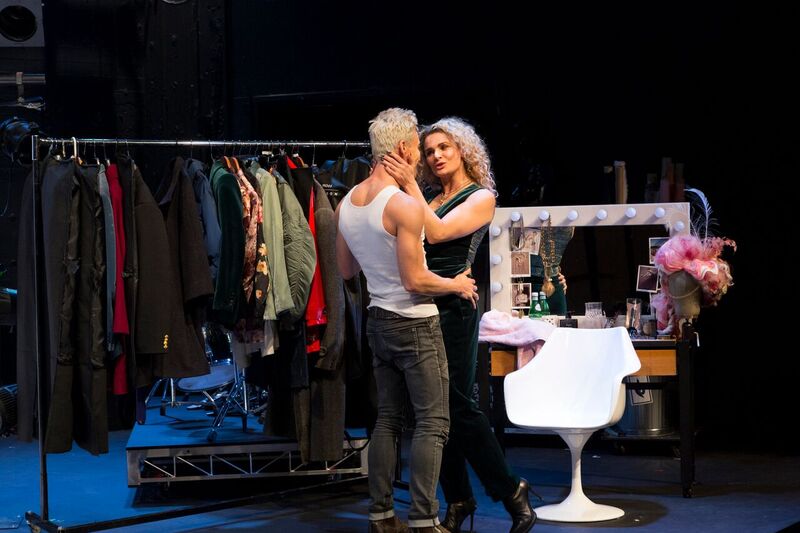 Griffin Theatre Company and Bell Shakespeare’s latest co-production, The Misanthrope, transposes Molière’s satire of ill-manners, hypocrisy, and prudishness, into contemporary Australian queer culture. It is a fun, funny frolick, in the vain of a mardigras float, and almost as shallow.

Molière is France’s answer to Shakespeare. Writing in the mid-1600s, he had a flair for rhythm and rhyme, and both his storytelling and characterisation were razor-sharp, depicting human frailty with wicked wit. Justin Fleming’s translation gives the classic work a contemporary Australian edge, whilst maintaining the rhyme throughout, in clever, often ingenious ways. Griffin and Bell together staged a modern Fleming translation of Molière’s The Literati in 2016. That was a roaring success, side-splittingly hilarious, and remains one of the best pieces of live comic theatre I have ever seen. The Misanthrope falls short of such high praise, whilst still being entertaining.

Director Lee Lewis places the action in a studio, amidst the production of pop music videos and fashion shoots. The set and costumes are eye-catching, and the composition and sound design tie everything together, creating a fun context, immediately recognisable as entertaining. It is also a context which is easily turned on itself for laughs, as we all know how superficial, vain and hypocritical the entertainment industry can be. Hence, there are some strong moments of self-reflexive comedy as a result of this choice of setting. However, the recontextualised story doesn’t always make a lot of sense.

In Molière’s original setting of 17th century Paris, we can understand the fragility of a young woman’s reputation, and feel for Celimene as she is shamed by the revelation of her multiple infidelities. However, in the modern age, and especially in the music industry, promiscuity is hardly shocking – even less so for a man, and an openly bisexual man at that. The idea of Cymbeline suddenly going from the cocky queer, prancing around shirtless with a pink feathered headdress, making eyes at everyone, to hunched over in the corner, shy and ashamed of his actions, is just too much of a stretch, thus making his downfall and heartbreak unrelatable.

Having said that, this inconsistency and unbelievability is not due to any failing on the part of the actor. Ben Gerrard shines as Cymbeline and is undoubtedly the star of this production. As soon as he enters the stage, the whole cast, and indeed the audience, is visibly lifted by his magnetic presence, and the dragging pace of the production picks up to a happy trot. With the physique of an expertly carved Roman statue and the perfect Instagram pout, he is eye candy for both men and women, onstage and in the stalls. More than this, his sense of comedic timing, paired with lithe dancer’s movements, result in some of the funniest moments in the play.

The central character, Alceste, whom Molière had written as a man but whom we see as a woman, is neither intrinsically comical nor likeable. Although it is clear Danielle Cormack possesses much ability, even brilliance as an actor, in this role, her strident, abrasive, disdainful nature is unmitigated by charm or nuance, and is, in a word, tiresome. (In fact, the opening scene, in which she rails relentlessly of her hatred for false flattery, small talk and other such social niceties, had the two men seated in front of me on opening night, snoring in unison within five minutes.) It is hard to believe that a mature, intelligent, discerning woman of substance, integrity and strong character, who judges others for their superficiality, could be smitten by a fickle pretty-boy of modest talent and principles so opposed to her own. It is also hard to believe that she should be so naïve as to be surprised and hurt at learning of the popstar’s other relationships.

I am by no means against modern-dress or popular local vernacular productions of classic theatre, and am all for the current trend of gender flipping, equalising the traditional misbalance in the cast and creating more female lead roles. However, in this case, the entire remixing of sex and sexuality, rendering every character either gay or bisexual, seems to serve no other purpose than to queerify the text. Somewhere in the non-binary fluidity and the glamorous entertainment industry setting, something is lost. The characters just don’t ring true, their reactions don’t always add up, and the societal comments and deeper themes of the original text are left unexamined.

Without empathy for the characters and belief in the tension of the drama, and without being compelled by any sense of pause to consider the reality of my own world as compared with the world presented onstage, I consider The Misanthrope as having more rhyme than reason. Perhaps this is because I went in with the expectation of something more substantial. So, consider yourself forewarned. When you see The Misanthrope – and I do still recommend seeing it – go to enjoy the poetry and the spectacle, rather than the story, embracing the prospect of fun, laughter and fabulous queerism.

The Misanthrope is playing at the Playhouse, Sydney Opera House, until 28th September.

Alicia was an invited guest of Bell Shakespeare

A Night at Strike: Bowling and an Escape Room at King Street Wharf