It’s official: the 40th anniversary of Sydney’s Mardi Gras is going to be the biggest and best yet. To launch the bonanza coming our way in March 2018, Mardi Gras organisers hosted an evening of spectacular entertainment at the Sydney Opera House.

Partygoers sat on the steps outside the Opera House, which was projected on one side with pink; the other, with a rainbow. Pink was also the name of the game for attendees, who were encouraged to don a splash of the shade in honour of Mardi Gras’ signature colour. My friends and I — including gay influencer Craig Mack – donned ‘body condoms’ over our pink outfits and settled in for the evening’s entertainment. 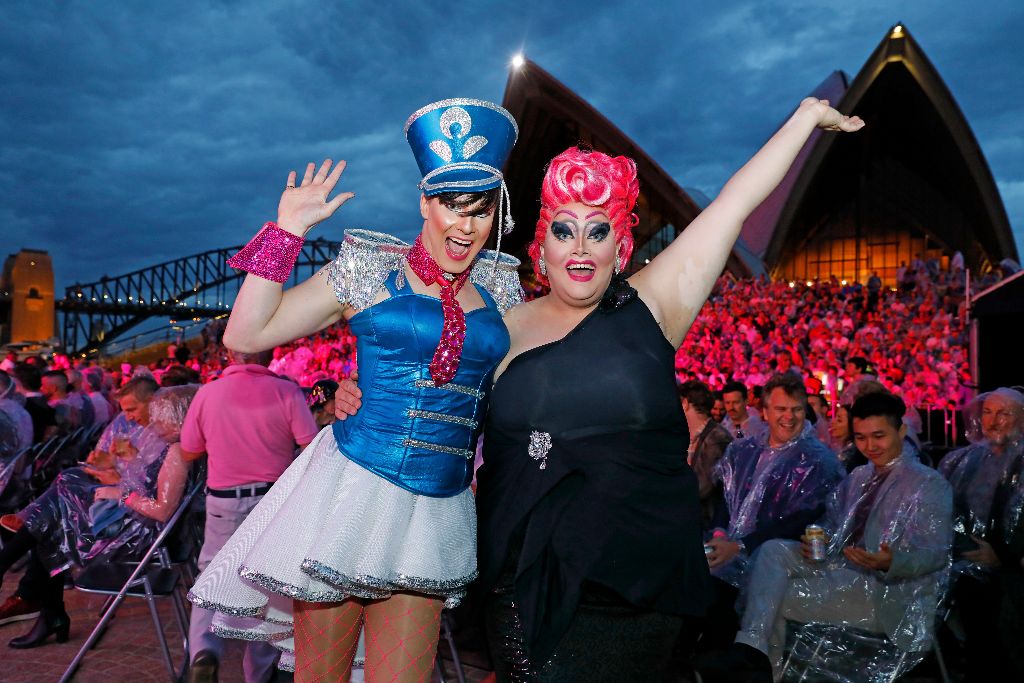 Comedian Joel Creasey added a note of levity to the proceedings, which took a sometimes solemn tone with speeches from Perth newscaster Nerelda Jacobs, Mardi Gras president Terese Casu, and Jordan Raskopolous, from Axis of Awesome. I was humbled to see a show of hands from the crowd of people who attended their first Pride event in the 1970s (how much they have seen). And as we all know from the Marriage Equality campaign, the fight for LGBTQIA+ rights is far from over.

And then it was time to do what Mardi Gras does best: par-tay! Trevor Ashley gave a preview of what to expect at his upcoming Mardi Gras show.  Samantha Jade took to the stage, just as the drizzle stopped. Partygoers shed our body condoms and boogied along. But the real star of the evening was none other than Danni Minogue. Her appearance was a total surprise to me and completely made my night. To see a gay icon performing on the steps of the Opera House (somewhere she pointed out she’s not yet performed in), was the icing on the cake of a spectacular Sydney evening.

I’m more excited than ever for the upcoming Mardi Gras program. From the main parade and afterparty – to the new Carriageworks hub hosting Koori Gras, a celebration of LGBTQIA+ Aboriginal culture. There’s something for everyone, including straight allies.

There’s so much to celebrate during Mardi Gras – and hopefully by then, we might even have a few big fat gay weddings to attend, too!

-Theresa
Co-founder of The Plus Ones, Theresa can’t wait to attend her second Mardi Gras. Follow her on Instagram.

Disclosure: The Plus Ones were invited guests of Cardinal Spin.
Image credit: Jeffrey Feng, Anne-Marie Calihanna.