Ever wanted to feel like your heart was about to pour out onto the floor beneath you during a stage production?  Then don’t see MEMBER, a new play from Fairly Lucid Productions about the frightening world of gang affiliation as it relates to hate crimes against Sydney’s Gay community in the 1980s.

Written and performed by playwright Ben Noble, MEMBER introduces us to grieving father Corey, who stands over his son’s hospital bed following a homophobic attack on him.  As he relays his past experiences with his son, we see Corey’s world was much more than we would have thought.

This play, set against Sydney’s Eastern Suburbs and Northern Beaches in the 1980s, is still an important story to tell, particularly during the Sydney Gay and Lesbian Mardi Gras festival.

Fairly Lucid Productions and Ben Noble did well to research the intense gay hate crimes of this decade, uncovering over 80 murders (and even some unsolved cases), involving men who were beaten to death by gang members, some of whom were children.  They don’t shy away from these aspects in the play, nor do they let the audience walk away with any sense of peace.

Many of the scenes were brought together using archival court transcripts and witness statements from gay hate crimes in the 1980s. For any longtime Sydneysider, it’s a horrific reminder that Sydney isn’t all sun and fun — and it isn’t for everyone.

There will never be a time in theatre where we aren’t confronted by the atrocities of the past, and MEMBER brings this to light tremendously.  Speaking as a straight audience member, it’s chilling.  As Corey escorts the audience through his journey from young boy to fatherhood, we see him as a typical Aussie bloke growing up in Sydney.  He associates with some ‘blokey’ guys from school, but it’s the 80s and all guys are taught to by hyper-masculine in this era. As I write this, I’m ashamed by how much ‘explaining away’ I’m doing of this type of behaviour.  I’ve been conditioned into thinking this was just the way it was.

Back to Corey. He’s presented as a young man who falls in love with a young girl, they have a baby, the baby becomes a young man, and the young man is now in a hospital bed. Corey is just like any father. Corey is just like any man.  Which begs the question: do we have to be monsters to act like a monster? Isn’t this something we all have in us, waiting to come out with the right amount of societal and immediate peer pressure, as well as innate sense of prejudice?

The theme of gang violence is the most troubling one in MEMBER, and I wonder if other audience members wrestle with this too.  Some parts of Corey on stage are a bit endearing (he talks about how much he loved his car; the audience giggles).  How do we excuse a good Aussie bloke who loves his car when he’s involved in reprehensible gang violence?

The answer is, you don’t.  Ben Noble’s Corey teaches us that you can be just one of the boys, but also be so blinded by mob mentality and homophobia that you turn a blind eye to what you know – what you feel – is so unbelievably wrong. 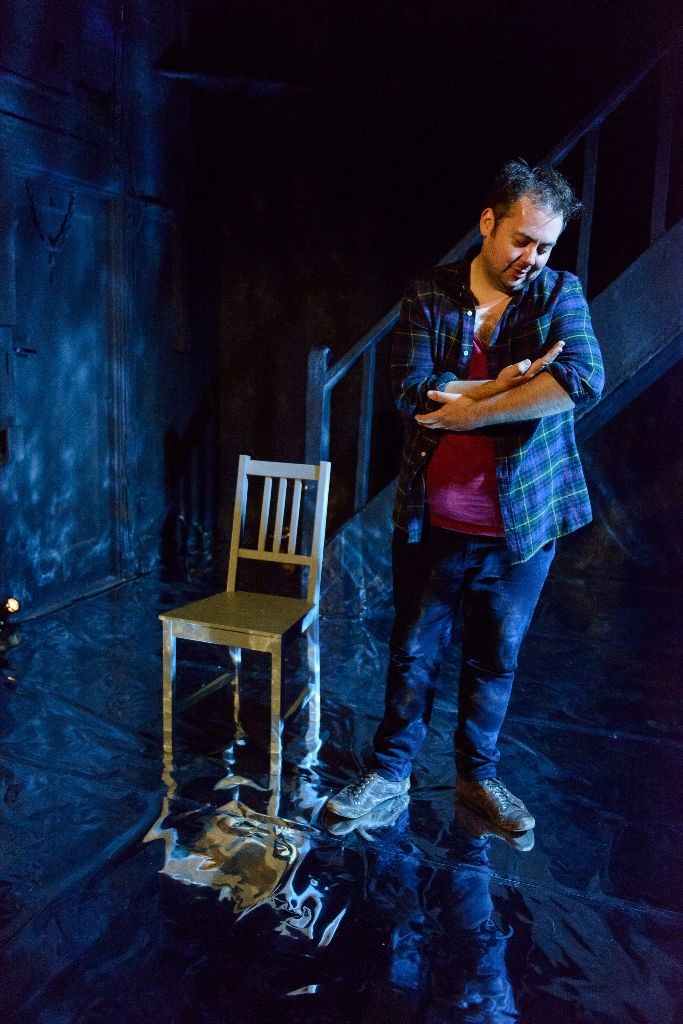 Ben holds the stage very well. He should be commended for holding the stage alone for such a heavy piece.  He was captivating, not just because the subject matter was so formidable.  Ben goes from happy-go-lucky boy to fearful man to grieving father, all in Blood Moon Theatre’s tiny theatre space.  Director Casey Gould should also be commended for the vision in keeping Ben, as Corey, on stage solo.  It brought out Corey’s loneliness and made the audience connect with him in a deeper way than if there had been more props or cast members on stage.

That many in Sydney’s straight community (myself included) still don’t know the full extent of the gay hate crimes that occur in Sydney should be enough of a wake-up call to stop being so naive about Sydney’s undercurrent of hate and violence. It’s happened before, it’s happening now.

If you want to be challenged about how you thought of Sydney, then MEMBER is definitely one to catch, particularly during the Sydney Gay and Lesbian Mardi Gras festival.

– Erica
Erica Enriquez-Clemente writes about whatever she can about whatever Sydney has going on.  When she’s not writing, she’s fallen asleep in front of the TV, because the latest episode of The Walking Dead had left her emotionally exhausted.  She’s on Instagram as @ee_clemente.

Disclosure: The Plus Ones were invited guests of Kabuku PR.
Image credit: Luke Cadden, Deryk McAlpin.