Bell Shakespeare Company’s latest showing of Othello is well worth going to see this season, whether you consider yourself a bit of a Shakespeare aficionado or quite the opposite. Take myself and my plus-one, for example.

I grew up going to Bell Shakespeare performances, first with my parents, then with my school, and continued into adulthood as I studied English literature at uni. I have read all of Shakespeare’s plays and seen nearly all of them performed live, some several times. Othello is my favourite of all the plays. I have very fond memories of studying it in Year 11. I remember whole sections of dialogue and admit to having an embarrassing crush on Iago, especially as played by Kenneth Branagh in one film adaption. Of course, the more thorough knowledge you have of the text, the less easily impressed you are. And yet, I enjoyed this performance and would recommend going to see it.

I took my husband Alex with me to this opening night performance of Othello. I usually take Alex with me to all the concerts and shows I review, but not to Shakespeare. You see, Alex is Brazilian. He’s fluent in English, with a vast vocabulary, but Shakespearean English is another level, of course. Alex’s education included reading classics I’ve never heard of, in Portuguese, Spanish and French, so culturally speaking there is a divide, in that he doesn’t know a lot of the stories, characters and quotes that we English speakers all seem to know, as if by osmosis. However, all that aside, Alex enjoyed Othello immensely. I kept looking over at home to see if he was falling asleep, but he was alert and engaged the whole way.

Othello is the kind of story you can’t help but get involved in, even if you miss a few words here and there. Love, jealousy, conspiracy, murder – it is the typical Shakespeare tragedy. But it is also particularly relevant today, as director Peter Evans pointed out in his speech at the opening night after-party, as it deals with issues we see being played out on the world stage right now in a large, terrifying way in the US presidential run – racism, misogyny and domestic violence. 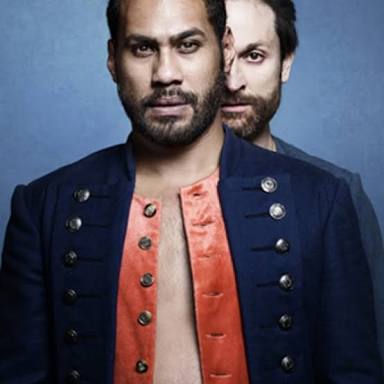 Othello and Desdemona have entered a scandalous inter-racial marriage that shocks and angers many. Iago is determined to break up this union, albeit for reasons of his own, namely “the green-eyed monster”, jealousy. In so doing, through insidious, conniving treachery, he reveals not only his own evil, but the deeply disturbing and dangerous views of the apparently good and loving Othello. In the end, both men murder their own wives.

Ray Chong Nee gives his all in his portrayal of the fatally flawed hero Othello, to the point where he can barely stand during the closing post-performance bows, and is unable to crack a smile. The audience watches his descent from stately dignity to grunting, growling gorilla. Chong Nee begins with charm and charisma, reciting verse with musicality and wooing the audience as he did Desdemona. As his anger builds, however, his shoulders hunch, his fists clench, his face contorts, his nostrils flare, and he really does appear to be a menacing silver-back ready to attack. It is altogether incredible and shocking to watch, but it happens all so suddenly and far too quickly. There is more power than finesse in this tranformation and methinks Shakespeare wrote rather more nuance into his eponymous hero. Nonetheless, Alex was suitably impressed by the melodramatic display, and I also certainly appreciated the physical investment. 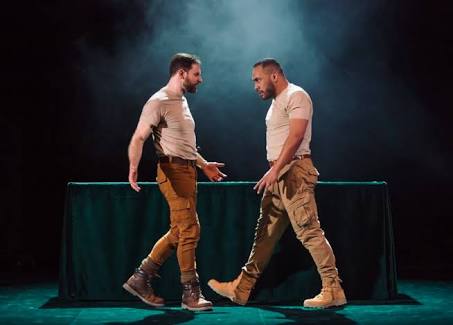 Yalin Ozucelik is just right as Iago, with a youth and dynamism unabashedly displayed in his ability to execute flawless monologue whilst doing push-ups. With his wit, over-riding confidence and repeated intimations with the audience, Shakespeare’s Iago has a sexiness about him, despite his amoral villainy, even just on the written page, and Ozucelik does indeed capture this in the flesh. It is a little disappointing, however, that the depth of his duplicitousness and shameless obsequiousness is somehow lost and the irony of “honest Iago” becomes almost a running joke, but it seems to me that this is not a result of Ozucelik’s acting, but a cut-down script.

Elizabeth Nabben is a sweet, pretty choice as Desdemona, her purity symbolised rather simply by her flowing pink and white costume, juxtaposed with the skimpy crimson of the “strumpet” Bianca. Desdemona’s deeper, stronger attributes of loyalty, courage and generosity are earnestly portrayed by Nabben, so that whilst submissive, she does not come across as weak or stupid.

The other eight characters are serviceably played by six actors of varying talent. Joanna Downing gives a strong performance as Emilia, delivering a couple of the most modern, empowered speeches Shakespeare wrote for a woman. Edmund Lembke-Hogan brings an interesting interpretation to the role of Roderigo, making him a lumbering oaf of a fool, who can barely coordinate his limbs, let alone control his will. Though at times his over-acting and over-projecting are slightly uncomfortable, his reading of the character works.

The bare set design, with dark green velvet columns that bring in the walls of the stage, heightens the feeling of claustrophobia of the text and amplifies the intimacy of this confronting, disturbing psychological analysis.

There are moments of directorial brilliance in this production. Particularly stunning and successful are the several soliloquy sequences in which lighting and sound, together with choreography, make it appear as if everything around Iago freezes and he is speaking to the audience alone about what we can see. This is a cinemagraphic technique achieved through special effects; very impressive onstage.

However, there are a couple of details I am left a little mystified about. I don’t quite understand the point being made by Desdemona lying onstage when the audience enters the hall, before the play commences. Is it that she is already dead and we are looking back at how that eventuated? Or is it that she is asleep, and all that follows is a mere dream? It’s curious to me also that there is no fake blood in the murder scenes, although the violence is acted out in a literal way, not choreographed or symbolic. And I haven’t figured out why, through costuming, the characters are basically all equalised and the issue of class and rank all but deleted. Is this a social comment?

Despite my husband Alex not understanding every word of the Shakespearean language, and myself not understanding all the tiny details of this particular production, we both thoroughly enjoyed the performance and were impressed more than once at key moments. I am happy to see Bell Shakespeare Company is still putting out top-shelf productions in the post-John Bell era. With all the pressure on Peter Evans, in his first year as Artistic Director, trying to fill the shoes of the legendary company founder, and trying to do credit to the legendary William Shakespeare, in the 400th year since his death, this is no easy task.

Othello is playing at Sydney Opera House until December 4. Tickets start from $35 for under 30’s, Sunday to Wednesday.

Alicia is the Theatre Specialist for The Plus Ones, reviewing the premiere concerts, symphonies, operas, ballets and stage shows in Sydney. She is a seasoned arts and music critic, as a former journalist for the ABC Limelight magazine and State of the Arts. She has a degree in Media & Communications, English and Music from the University of Sydney.

Disclaimer: The Plus Ones were invited guests of Bell Shakespeare Company