We were greeted by Alex Gibbs, aka Gibbo. He poured us a glass of darker-than-usual Pale Ale. The tables were laid out banquet style with snacks and decorative burlap sacks of hops. After everyone was seated, Alex started his presentation.

He and his brother started their beer company while brewing their own beer by themselves. After an informal tasting session with a potential client, they decided to go legit. Gibbs Premium Beer was born.

The tasting combinations were created and perfected through trial and error by the Gibbs’ family. First was a Pilsner with fresco paesanella and bresaola. Second, was the Pale Ale paired with meatball and smoked cheddar. Third, we had Kolsch with the prosciutto and french Brie. All the cheeses were provided by Paesanella Cheese.

Then we had Hefeweizen with goats cheese and smoked salmon. Next, we tasted some of Batch Brewing stout — another Australian craft brewer — paired fantastically with dark chocolate — made it beyond delicious. Finally, we ended with Gibbs ginger beer. It was delightful, fresh and flavourful. You don’t often get ginger beer on a craft beer tasting so it was a nice treat. 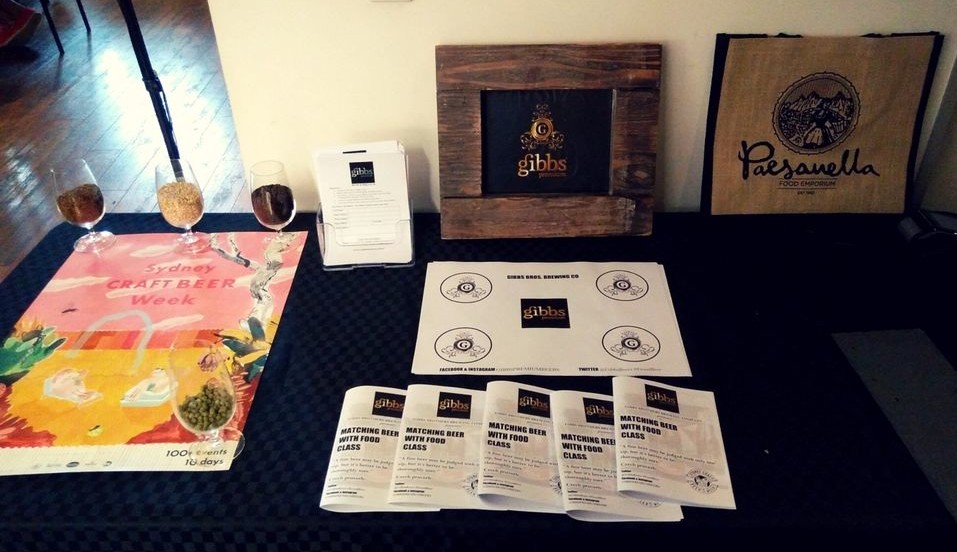 Each combination was perfectly matched and made even the least prospective option delicious. Keep an eye out for Gibbs at the next food or drink festival you’re at. Try their ginger beer — you’ll thank me.

– Orlaith Costello
The Plus Ones’ Food & Beverage specialist Orlaith Costello recently moved to Sydney from Ireland, where she worked in the catering industry for over a decade. She is a freelance contributor to many online publications. Follow her on Twitter and Instagram for more.

Sydney Craft Beer Week: The Lord and the Oysterman at The Lord Nelson