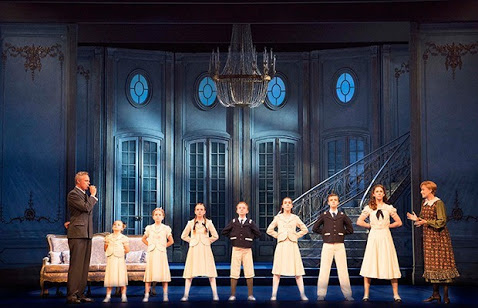 One would think that putting on a stage production of The Sound Of Music would be a shoo-in success. It is, after all, one of the most famous musicals of all time, holding a special place in the hearts of many, and hence guaranteed to pull a sold-out audience each night. However, could this legacy turn out to be a hindrance rather than a help?

The theatre is filled with an audience who know the original 1965 film as well as Maria knew the hills. They sing along with every word. They are ready to laugh at each joke before it’s spoken. So how would they respond to a script which has been modified and shortened for the stage?

Moreover, Julie Andrews and Christopher Plummer wore some pretty big shoes. They have been idolised and emulated for decades by devotees who have watched them grow gracefully into their silver years with dignity and class. The early death of the young actress who originally played Liesel served to immortalise her in that role. These are hard acts to follow. How would the audience receive the Australian actors who are brave enough to take on reproducing the roles of the original film cast?

The answer to the above questions is: very well, it would seem.

From the opening scene, in which nuns float through the aisles holding candles and singing Preludium Dixit Dominus, to the moment when the Nazi Stormtroopers literally storm down the aisles and take up positions around the auditorium, the gap between stage and audience is bridged. With a hall full of experts, it is necessary for the show to be at least somewhat interactive and engaging. Towards the end when the Von Trapp Family Singers perform at the Nazi-guarded concert, there is a Shakepearean ‘show within a show’ moment, in which the modern audience becomes the 1938 concert audience, actually playing out the extras’ role in the script as they clap along with the music, applaud the performances and wave goodbye.

The genius of the memorable Rodgers and Hammerstein score is done justice, for the most part, by the vocal prowess of the cast. Of course, one cannot compare live voices of stage actors who sing whilst dancing, with the sound quality of the film, recorded after who knows how many takes, with editing and enhancement to boot. Having said that, Amy Lehpamer’s cleanly articulated, rounded vowels, and clear, ringing tone really are reminiscent of Julie Andrews. The role of Maria – innocent, enthusiastic and charming – suits her perfectly. In her debut leading-lady performance, Lehpamer shines, both as a singer and an actor.

Marina Prior’s crystalline soprano is as faultless as ever and she brings a warmth and depth to the character of Baroness Schraeder, who in the film is meant to be disliked and mistrusted. The extra songs that are added to the musical which are not in the film, although not as geniously constructed as the original Rodgers and Hammerstein numbers, serve to both flesh out the otherwise background role of this class-act performer and to flesh out her character as more than just the loser in a love triangle.

The children are, as they should be, absolutely adorable. The audience falls in love with each one of them, with their individual personalities and quirks, although the youngest Gretl always draws the most awws. Cuteness aside, they are also very well trained vocally and beautifully directed and choreographed.

Cameron Daddo is a serviceable enough Captain Von Trapp. He lacks the vocal technique and power of his fellow cast members, but his is not a singing-centric role to begin with, and Christopher Plummer was no great tenor himself. What is required of the Captain is to be an imposing, authoritative figure on-stage – tall, dark and handsome. Daddo achieves this, albeit more by gift of nature than artistic nurture.

The real stand-out performance, musically speaking, is delivered by operatic mezzo, Jacqueline Dark, as the Mother Abbess. The Act One finale Climb Ev’ry Mountain, is rich and rousing, soaring above the peaks of Salzburg, even without a full orchestra. Dark’s fellow nuns are likewise moving in each of their scenes, with exceptional opera technique and mature, textured harmonies.

The set is at times impressive – the Von Trapp mansion with its grand staircase and chandelier, for instance, or the massive swastika banners unfurled throughout the auditorium (questionable in taste, but definitely impactful). However, the few small mounds which aspire to be the rolling hills and mountainous peaks of Salzburg are on the edge of laughable.

The tension that slowly builds between Maria and the Captain in the three-hour film is sadly missing in the stage production. Integral scenes in which the couple fall in love are rushed, and their relationship is somewhat less believable and certainly less passionate. Not having a camera to zoom in for a close-up at key romantic moments doesn’t help either. But these are realities to be expected in the transcription from film to stage. Sacrifices have to be made.

But we do know the story already, of course, and these minor disappointments don’t really disappoint that much at all. What the audience is there for is enjoyment, and perhaps sweet nostalgia. Every one of the familiar songs is in there, even if they may at times be shortened or their positioning in the story re-ordered.

Post-performance, the Capitol Theatre is abuzz with the energy of a crowd entertained and delighted, full of smiles, laughter and applause. In the shadow of the giant film and it’s equally giant actors, this London Palladium production can be enjoyed as a playful trip down memory lane, but with its stellar cast, it also stands tall enough to be appreciated in its own rights.

The Sound of Music is showing at the Capitol Theatre from 13 December 2015 to 9 February 2016.
– Alicia Tripp
Alicia is the Theatre Specialist for The Plus Ones, reviewing the premiere concerts, operas, ballets and stage shows in Sydney. She is a seasoned arts and music journalist, as a former critic for the ABC Limelight magazine and State of the Arts. She has a degree in Media & Communications, English and Music from the University of Sydney.