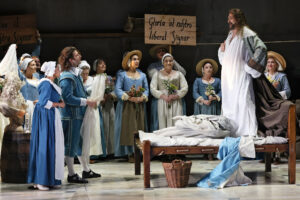 My plus one at the opening night of Opera Australia’s current production of Mozart’s The Marriage of Figaro was my husband. He had been wanting to see this particular opera for years. His favourite movie of all time, The Shawshank Redemption, has an iconic scene in which one of the pieces from The Marriage of Figaro, “Duettino Sull’aria” is, in an act of rebellion, played through loudspeakers in a prison yard.  Morgan Freeman’s character says, “To this day, I have no idea what those two Italian ladies were singing about. Truth is, I don’t want to know. Some things are best left unsaid. I would like to think they were singing about something so beautiful it can’t be expressed in words and makes your heart ache because of it.”

It is indeed a beautiful piece of music and my husband has had it on his playlist for years. It pops up as we drive in the car or when we’re cleaning the bathroom, and it does make you stop and just listen. Not knowing the story of The Marriage of Figaro, and connecting that duet instead to the intense and touching story of The Shawshank Redemption, hubby had in his mind the unarticulated, heart-achingly beautiful significance Morgan Freeman described. I made the mistake of not giving him the heads-up that The Marriage of Figaro is in fact a comedy and that the piece he so reveres is two women concocting a silly plan to trick their husbands. How disappointed he was with that much anticipated scene in Act Three.

But it’s like tasting Vegemite blindfolded when you’re expecting Nutella. Both are delicious, but the surprise resulting from misinformed expectations can leave you feeling disappointed and unfulfilled, even ripped off. So, for any opera newbies out there, please know ahead of time that The Marriage of Figaro is a comedy. Get The Shawshank Redemption out of your mind, if you can. And if any of you are expecting to hear that famous “Figaro” song from Bugs Bunny, you’re in the wrong opera. That’s Rossini’s The Barber of Seville. Same character name, different opera.

With those misconnections out of the way, if you go into The Marriage of Figaro expecting to laugh a little at a silly, clichéd, out of date comic storyline featuring the obligatory cross-dressing and mistaken identities, and marvel a lot at Mozart’s musical brilliance, with his light, bubbly, quick abundance of notes and recognisable tunes all over the place, you will by no means be disappointed. This is a great comic opera. Probably Mozart’s best. And this is a gorgeous production. 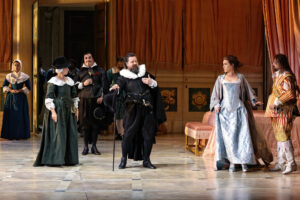 Jenny Tiramani’s costumes and sets, especially in acts two through four, are grand, lush and historically authentic in their every detail. At each curtain reveal there can be heard “oohs” and “aahs” throughout the audience as the sheer height and depth of the stage are realised. Dressing all servants in the same shade of cornflower blue is a much appreciated assist in following the characters’ identities.

All principals give excellent performances, with soprano Stacey Alleaume in the role of Susanna, Figaro’s bride, shining as always. The world-class Opera Australia Orchestra under the lively baton of Italian conductor Andrea Molino is on top form from the famous overture, to the grand and happy finale. It’s always a delight to see the fortepiano up front on full display. It makes it easy to imagine Mozart conducting the orchestra from his customary position at the fortepiano, as he did in the first two performances of the opera in Vienna in 1786.

Of note is that Opera Australia has a special incentive at the moment offering Year 11 and 12 high school students tickets to The Marriage of Figaro at the hugely discounted rate of just $20. This offer is also available for performances of Turandot.

The Marriage of Figaro is showing at Joan Sutherland Theatre, Sydney Opera House, until February 18.

Where art forms collide – The Museum of Modern Love