At what has always been (and continues to be) one of my favourite Sydney venues, Boiler Room transformed Oxford Art Factory into a scene well recognized with their signature setup, placing the DJ in the middle of the room and allowing the crowd to disperse and dance around all sides.

Self described as ‘Music TV for the internet age’, Boiler Room is an internationally renowned broadcast which showcases the best local and international underground acts. Streaming live, Boiler Room televises sets to a large global audience via their Youtube channel– allowing music fiends access to some of the best emerging artists from a range of different genres such as electronic, house, trap, hip-hop and more.

This year, Boiler Room has teamed up with Budweiser to travel the globe in order to discover the best underground scenes and talent within these genres. Having toured some of the world’s largest cosmopolitan cities, they recently touched down in the heart of Sydney to put on an exclusive show. 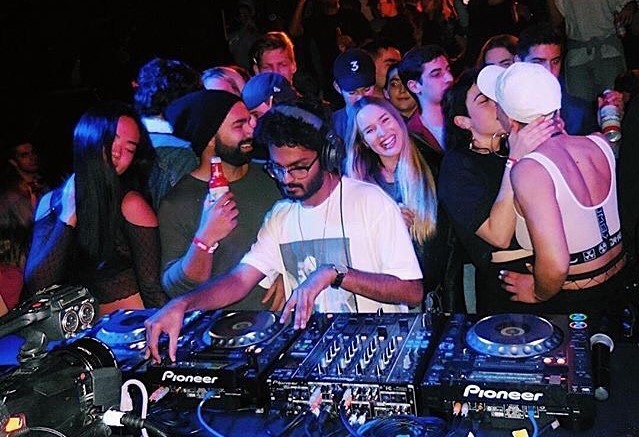 First up for the night was local Sydney producer AYWY, who warmed up the crowd with a rich amalgam of electronic, hip-hop and enigmatic bass- the type of sound Boiler Room is well renowned for. As the crowd filled in and made sure to get their hands on the complementary Budweiser beer, the experimental dance trio BV (short for Black Vanilla) took to the decks to entrance and enthrall. Having been described by fans on Triple J Unearthed as both ‘dark’ and ‘energetic’, the trio made sure to bring their intriguingly distinct sound to the OAF basement in true BV style.

Next up was international act Machinedrum, one of the many aliases of American electronic/ glitch-hop producer Travis Stewart. Bringing to the basement what I deem easily as the best set of the night, he delivered a contagious energy that immediately demanded the room’s attention. Mixing in his own stuff such as ‘U Betta’ and ‘What Is This’ with other electronic infused hip-hop sounds made for an excellent set.

Then came headliner TOKiMONSTA, the Californian DJ and producer with an impressive array of her own music, remixes and collaborations- such as Flying Lotus, Yuna and most notably Anderson .Paak. Dabbling in genres that span from pop, dub, electronic and hip-hop, the bubbly producer delved into the archives to deliver the crowd old-school sounds mixed with upbeat pop curations, leaving everybody happily bobbing away. Notable tracks included the interweaving of ‘Don’t Call Me’ (ft Yuna) and ‘Smoke & Mirrors’ within her set.

– Caitlin
Caitlin Hely is a current media and communications student at the University of New South Wales and likes to believe there’s nothing a good cocktail can’t fix. ✨✨Follow her antics at @caitlinhely

To keep up-to-date with the latest underground music from Boiler Room, follow their Youtube channel, or check out their website to see where they’re off to next.

Disclosure: The Plus Ones were invited guests of Thinking Loud.
Image credit: TOKiMONSTA, Darren Luk/everylastsecond

Are you ready to Return to Rio?

Sydney Underground Film Festival 2017 – The Plus Ones’ Guide