Described as ‘Australia’s biggest game of real-world, zombie-themed tag’, Zedtown‘s premise is simple: Use a Nerf gun; shoot zombies. In practice, you join thousands of players in a full-scale theatrical experience, replete with scientists and zombie regeneration pods. There’s even an app to keep track of how many zombies there are during the 4-hour experience. Zedtown is a stunningly fun event, which everyone should engage in at least once.

The world-building is on point. Each different Zedtown has an entire backstory, with characters and themes set up so you can memorise the whole tale before the game. This year’s theme in Sydney and Melbourne was ‘State of Emergency‘. A virus decimated the government. The remaining humans needed to gather enough parts to create an evacuation area to escape the ravenous zombie hordes. 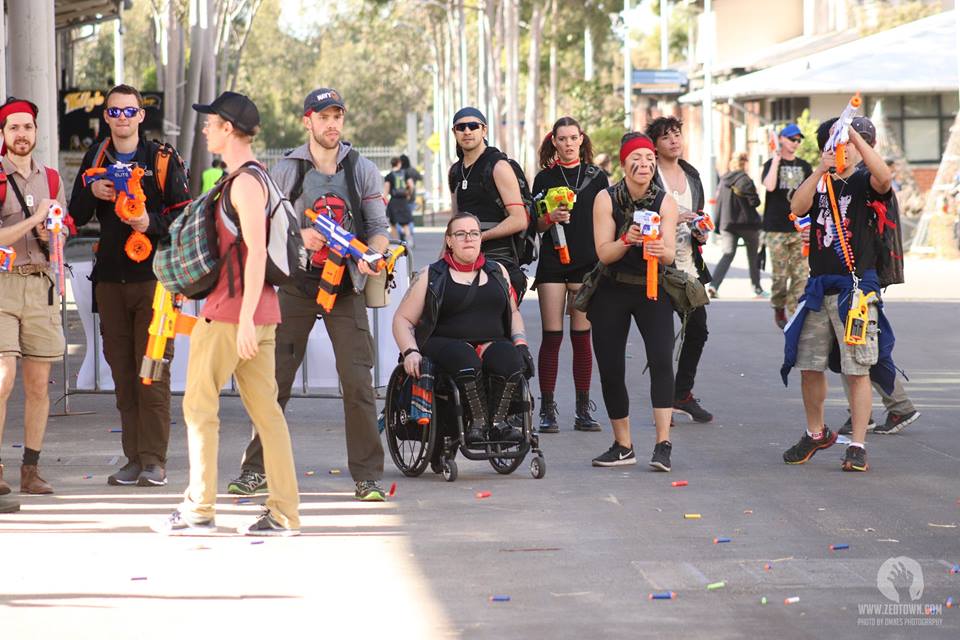 Picture 1,000 people with Nerf guns running around the Sydney Showgrounds, evading and hunting one another. The basic rules: If you’re human and get touched by a zombie, you immediately turn into one. If you shoot a zombie with your Nerf gun, they have to go to a regeneration pod and respawn. (These amazing ATM-like machines played music for two minutes before zombies could get back into the game.)

When my +1 and I signed up we needed to join a faction — Blue, Red, or Yellow. Donning coloured armbands to denote our group, we followed our Blue leaders to an area between buildings. Our commanders, over loudspeakers, ordered us to create a barricade to keep off the zombies. We were instructed to explore and find fuel to power our anti-zombie generator — and not to trust the other human factions until we knew if they were friend or foe. 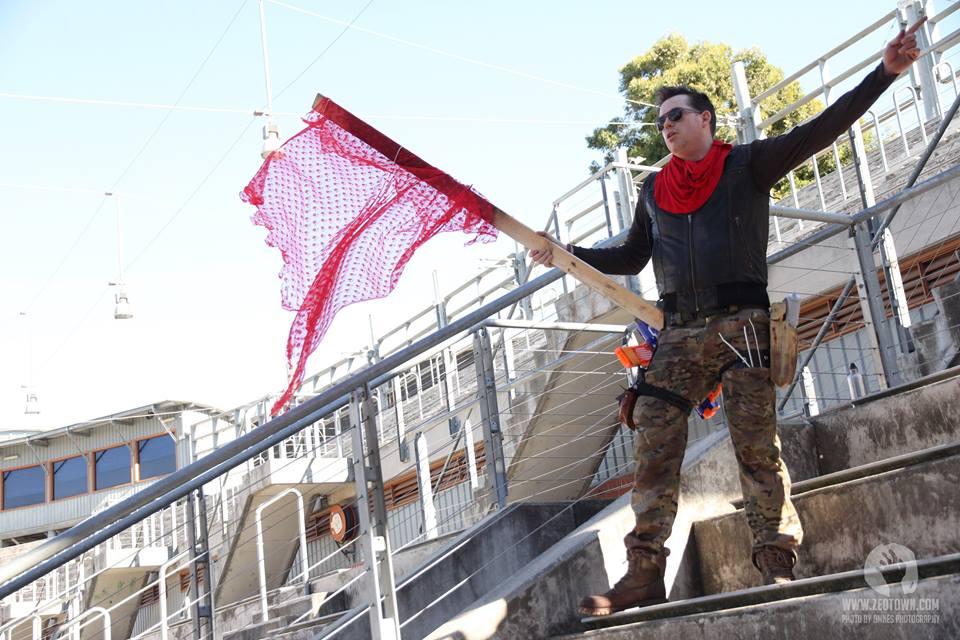 This is when it started to feel all too real. I adore immersive experiences, like Underground Cinema and The Boon Companions. Indeed, some of UGC’s actors are part of Zedtown. It’s a testament to the Zedtown organisers that the end-of-the-world scenario felt like it was real life. That, or I’ve read perhaps one too many post-apocalyptic books. (World War Z, anyone?)

So when I got turned into a zombie way too early (#24 out of the 1,000 people), I may or may not have shed a tear. (Full disclosure: I dislike the guts and decay surrounding zombies. I’m way more of a vampire fan.) And in truth, it’s much more fun to be a human player than a zombie. 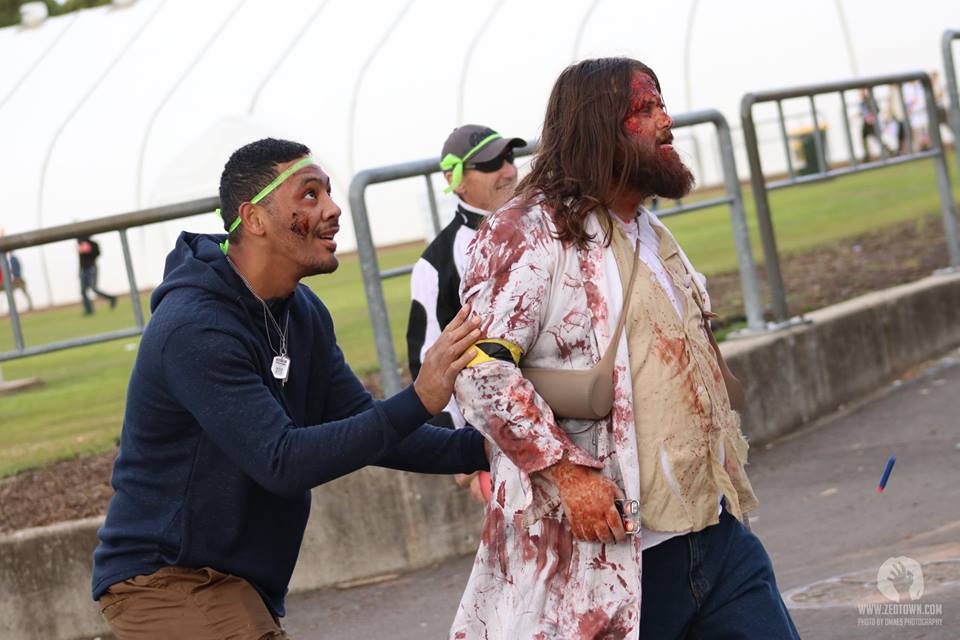 The human players are led by actors who gave orders and guided them around the Showgrounds on missions. Although the zombies had a few characters amongst them (the Witch, a Roller Derby zombie), there were zero leaders.

It was frustrating at times — how easily we could’ve trapped the groups of humans if we’d had two hordes attacking from either side. And isolating at others — my +1 lasted until the final 15 minutes of the game, so we only got to play together the first hour. Next year, I’m going to get a large group of friends together. I’ll also restrain my hubris. No trying to attack zombies right at the start in close range, running the risk of my Nerf gun misfiring. 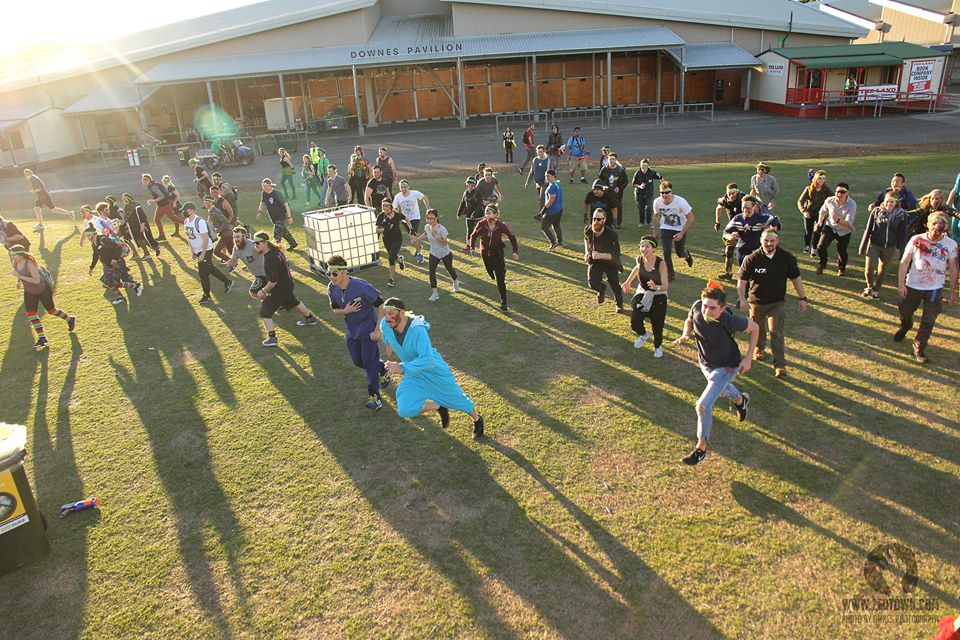 And yes — even though I was disappointed to not stay a human longer, playing Zedtown was still thrilling. The Zedtown team create an afternoon (or an evening — there’s a night session!) where you’re totally focused and engaged in a completely unique experience. With five years of games, 42,000 kilometres run, and 73,000 Nerf darts shot, long may Zedtown survive.

– Theresa
Co-founder of The Plus Ones, Theresa loves getting suuuuuper into immersive theatrical experiences. Follow her adventures on her Instagram.

Disclosure: The Plus Ones were invited guests of Zedtown.
Image credit: Omnes Photography.