‘More exciting than Jason Donovan on a lilo’ was just one of hundreds of verbal tics to come out of Jess Thom during Backstage in Biscuit Land. I happen to think the phrase doubles as accurate praise for her performance (sorry Jason) and promise this assessment wasn’t at all influenced by the free biscuits given out by Thom and her co-star Jess Mabel Jones, aka Chopin, during their show at All About Women at the Sydney Opera House.

Thom is one of the 300,000 people in the U.K. affected by Tourette’s Syndrome. She’s also the co-founder of Touretteshero, a project which celebrates the humour and creativity of the condition, breaking down stereotypes and misconceptions along the way.

She nailed both of these objectives with Backstage in Biscuit Land; a wonderfully entertaining and beautifully honest expedition into the unpredictable and often uncomfortable world of Tourette’s. In between shouts of ‘biscuit’, ‘hedgehog’ and ‘congratulations – you’re going to marry a Care Bear and call it Arthur’, Thom shared some incredibly poignant experiences from life with a very noticeable disability.

I learnt more about Tourettes in one hour from Thom than I did in six years of studying psychology at university. I also found it much more enjoyable. 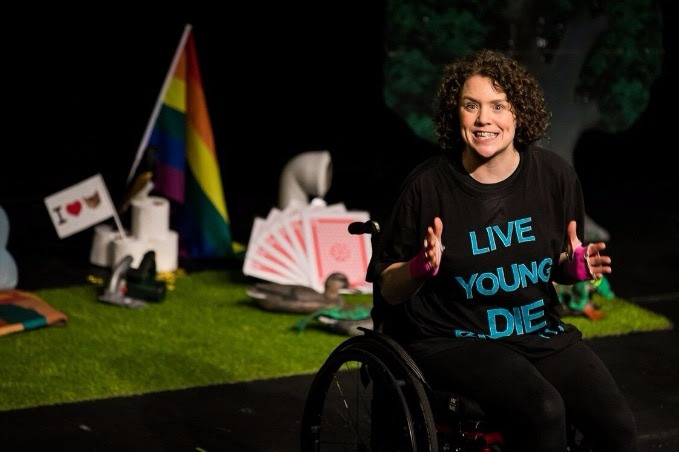 Thom’s tics are impossible to ignore, so instead they’re celebrated in every way possible. As well as some impressive improv by both ladies which amplifies the humour of Thom’s outbursts, the stage is adorned with props fashioned to resemble some of her more imaginative utterings. There’s a dinosaur balloon, a loaf of bread named Steve, and the smell of an ice-cream parlour and bakery from a different age, which is enthusiastically sprayed into the audience.

Some tics become songs, others are mimed in hilarious fashion by Chopin and some – like ‘biscuit’ – occur with such frequency they simply become background noise.

In addition to her near constant verbal tics, Thom has severe physical tics which make it difficult for her to control her movements, something which was demonstrated both by her wheelchair and her attempt to eat strawberries. She also has seizure-like ticing fits several times a day where she loses the ability to control her body and speech completely.

Demonstrating a resilience and sense of humour most of us mere mortals can only aspire to, Thom somehow turns this into joyful theatre, sharing love letters she’s written to her various wheelchairs and offering the audience a strawberry smoothie from the squishy mess that adorns her face and hair.

There are a couple of times during the show where it seems like Thom’s tics start to get the better of her but, like the super-awesome sidekick she is, Chopin swoops in and redirects her co-star with what might well be the best game show in existence: Fingers on Buzzers.

It’s essentially a free run of tics formed into questions and answers and thanks to Thom’s uninhibited thought processes and Chopin’s incredible ability to improvise, topics are both perfectly random and strangely specific. We were treated to segments on Kylie Minogue’s knockers circa 2001 and ideologies about pencils, where Chopin was told – via one of Thom’s longer outbursts – that her mum ‘balances them between her nipples in an act worthy of David Blaine and a cat’. Channel 10 needs to get on this stat.

At one point during the show, Thom shares that a close friend described her Tourettes as a ‘crazy language generating machine’ and told her it would be a waste if she didn’t use it creatively. Luckily she listened, because what she’s created isn’t just truly wonderful theatre but an incredibly effective vehicle for education and awareness raising.

‘There’s a take home message from this performance’, Thom begins, towards the end of the show. ‘Never put a llama in a corner’. Breaking into one her frequent bouts of laughter, she tries to correct herself. ‘No that’s not it – always wash your bits with horseradish’. She laughs again. Clearly that wasn’t it either. While she may not have been able to articulate the take-home message, she sure as hell demonstrated it: Tourettes isn’t something to be pitied, mocked or offended by and it certainly doesn’t define a person.

– Kirsty
Kirsty Fanton is a freelance writer and Jess Thom’s newest fan girl. Since seeing Backstage in Biscuit Land she’s googled both ‘Jason Donovan shirtless’ and ‘Kylie Minogue’s knockers 2001’, just to see what all the fuss is about.

‘Backstage in Biscuit Land’ was one of the performances at All About Women. Read more about Jess Thom and Biscuit Land on the Touretteshero website.