In their first solo tour since 2019 (thanks again to our friend SARS-CoV-2), the Australian String Quartet (ASQ) has returned to Sydney with an incredible concert in the Utzon Room, Sydney Opera House featuring Bartók, Mendelssohn and Fischer.

The ASQ, based in Adelaide, features four formidable musicians who masterfully draw the life out of their 18th Century Guadagnini instrument with so much emotion and precision that you can’t help but be moved. 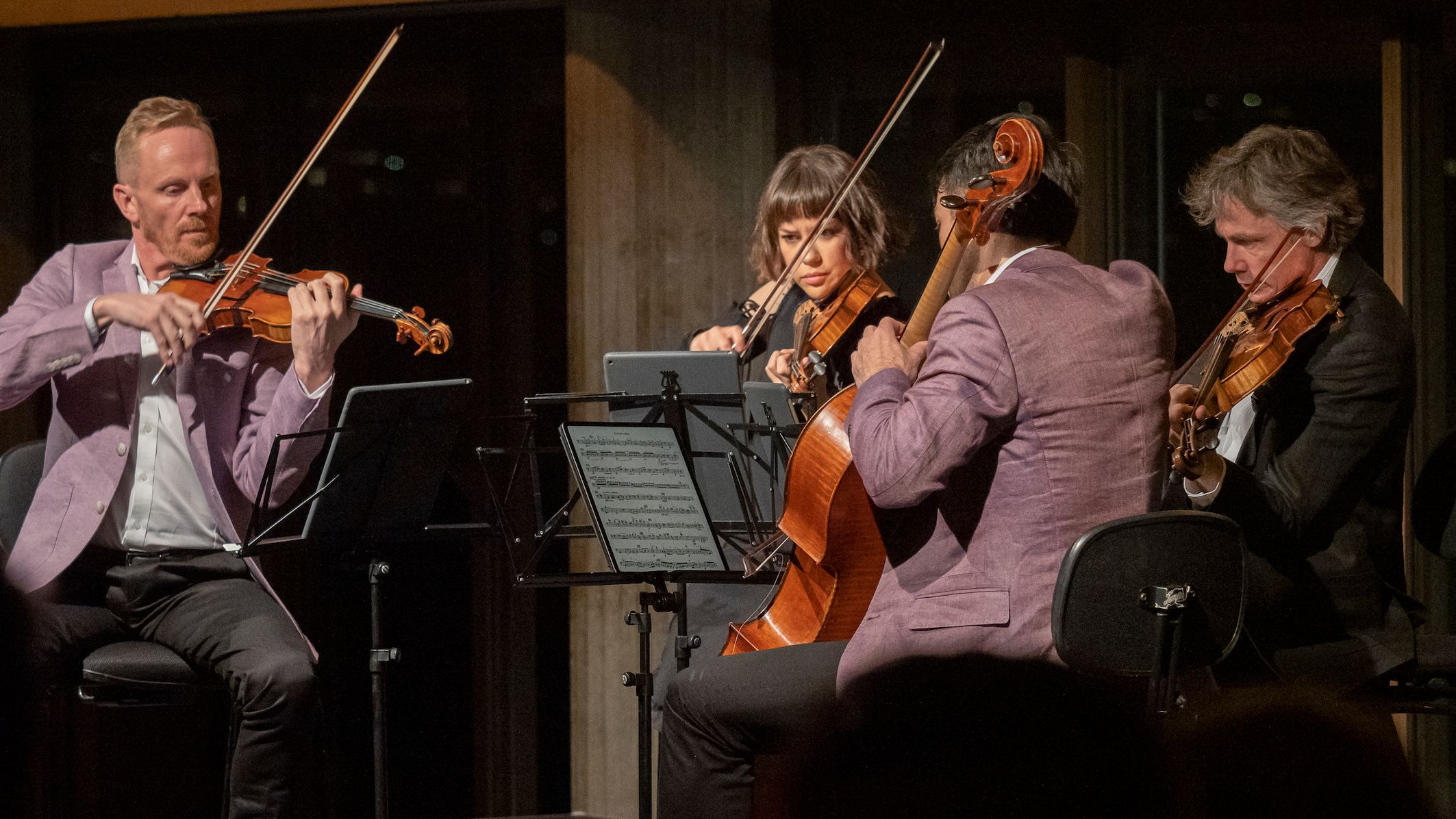 Dale Barltrop leads the quartet on 1st violin with an unbridled passion, something definitely required for these three pieces. Francesca Hiew meticulously reigns in the 2nd violin so unassumingly you would be lead to believe that nothing could phase her and that the instrument was a mere extension of her body. Stephen King, who is leaving the quartet to lead their education program, plays the viola like a simple game… You often saw him smiling and cheekily engaging with the other performers. Finally, Michael Dahlenburg, the quartet newbie, joined the ASQ in November last year and has already established himself as one of Australia’s best cellist (in my humble opinion).

While each performer, approached the pieces in their own unique way, there is no doubt that what we experienced was the pinnacle of chamber music in this country and beyond.

If anyone thought this would be a straightforward evening of traditional string music, clearly isn’t familiar with Bartók. Instead, this piece demanded the ASQ use every ounce of energy and every trick in their toolbox, including sul ponticello (playing with the bow as close as possible to the bridge), col legno (playing with the wood rather than the hair of the bow), and glissandi (sliding from one note to another). Again, leading with Bartók, I wondered how they could ever build momentum, and yet the energy only went up from here.

The ASQ launched into this piece like the Bartók was only a warmup. Requiring much more subtly and finesse, Mendelssohn’s String Quartet No 1 in Eb major was the melodic interlude the audience came for. While the ASQ effortlessly glided through the movements, I watched the audience squeeze their loved ones, smile at the stranger sitting beside them and get lost in a moment of whimsy while staring out the Utzon room windows into the Sydney Harbour.

The ASQ fell in love with this piece after hearing the composer play it with his quartet. Bordering on program music (music that tells a story or conjures up an image), the first movement retells the story of the Piper Bill Millin, who played the bagpipes at the D-Day landing at Normandy. If you closed your eyes, you would almost swear a piper had joined them on stage, with the Cello providing a drone-like quality to the piece. Next, Fischer channels his Eastern Europe roots and brings a Czech/ Romani to the final movement where the ASQ were required to create some unconventional sounds from their instruments. I’m not sure how Guadagnini (the luthier responsible for the instruments) would have felt about his viola being used as a woodblock! 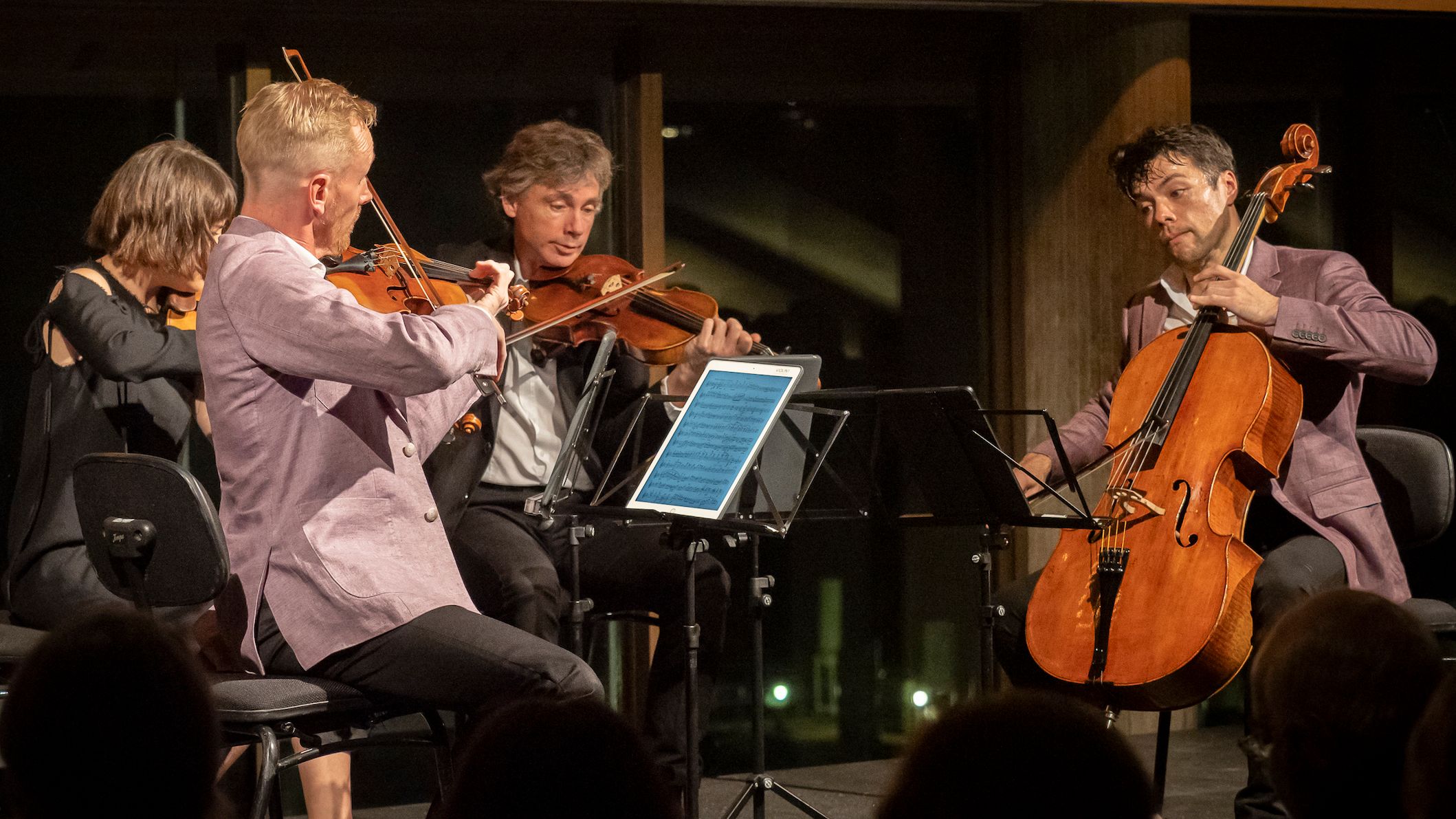 For someone who loves all music styles, I am kicking myself that it took this long for me to discover the wonder that is the Australian String Quartet.

This ASQ season finishes in Brisbane, 18 June, but you can find their upcoming tour dates on their website.

Disclosure: The Plus Ones were invited guests of Emma Collison Publicity.
Image credit: Jacqui Way and Sam Jozeps.

‘The Little Prince’ at The Sydney Opera House