After nearly a year of forced abstinence, Sydney’s performing arts lovers are enjoying the treat of getting dressed up, meeting friends and going out for a night at the opera more than ever before. Knowing this, Opera Australia have made some excellent choices for the line-up of this unique season. They started with the light, fun and scintillating crowd favourite, The Merry Widow, and have followed up with the obscure, rarely performed Ernani. What a wise decision that was. Now, when people are itching to go out and see anything, is the perfect time to introduce them to something they ordinarily might have shown little interest in, for the fact of never having heard of it before.

But this little known number is neither random nor alien. When you watch and listen to it, you realise that Ernani is not in actual fact so unfamiliar. It’s not that there are any famous arias or duets that you would necessarily recognise. But it is, after all, a Verdi. The whole score feels like home. The big, beautiful melodies and expressive, dramatic orchestral music are reminiscent of his later celebrated masterpieces Rigoletto, Aida and La Traviata. But back in the day, it was Ernani that originally launched Verdi to fame.

The plot too, based on a Victor Hugo play, is tried and true opera material – a love triangle, or rather in this case, a love square that ends in tragedy. An outlaw, a Duke and a King are in love with the same woman, Elvira. Ernani, the leader of a band of outlaws, is the one whom Elvira loves. However, she is betrothed to and kept against her will by her old uncle and guardian, the Duke Silva. Don Carlo, the King, is besotted too and believes he is entitled to take what he wants. Duels and plots of regicide ensue, together with vows and pardons, and the whole thing ends with a good old-fashioned suicide. 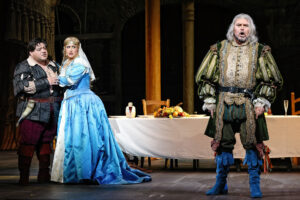 I am always pleased and impressed with the standard of the Opera Australia performers. The title role is sung by one of my favourites, Diego Torre. His tenor is lyrical and passionate and perfectly suits the melodies Verdi wrote for the romantic hero. Don Carlo is sung by baritone Vladimir Stoyanov in his Opera Australia debut. I particularly enjoyed the way Stoyanov used the lower dynamic range, managing to make even his gentle pianissimos heard with clarity. Silva is sung by bass Vitalij Kowaljow, also making his Opera Australia debut. His vast experience as a singer and performer with various European and American opera houses, as well as his deep, controlled bass, make him the right choice to play the embodiment of the old generation standing in the way of young love. Elvira is sung by soprano Natalie Aroyan, who in 2019 won a Helpmann Award. Her clear, powerful voice can be heard over the top of her thee suitors and even the entire Opera Australia choir in unison! 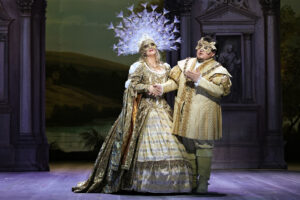 The only gripe I have about this production is the set. I am not used to seeing Opera Australia employ two-dimensional cut-outs from stage ceiling to stage floor. It looked to me like a primary school student’s cardboard diorama. But I suppose after the hit the industry took in the last 12 months, some budget cut-backs are to be expected. Having said that, the medieval-inspired costumes are spectacular. 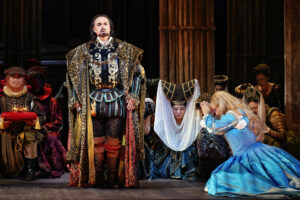 One final note, the Opera Australia and Sydney Opera House management and staff must be praised for the vigilance with which they enforce mask-wearing and social distancing. With a seat being left vacant between each group and with watchful, proactive attendants, you can book and enjoy a performance of Ernani without fear.

A Beautiful thing is happening at the New Theatre