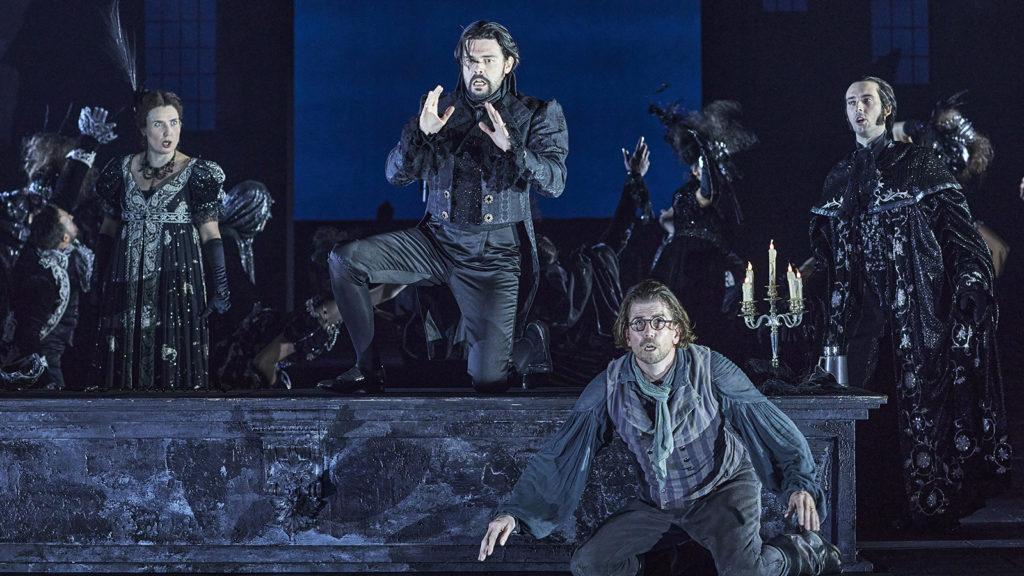 Don Giovanni is back in black. Legendary Scottish Director Sir David McVicar’s shifts the action of Mozart’s masterpiece of of sexual morality into the Gothic period, thus celebrating the supernatural aspects of the story, heightening the emotional conflicts of the characters and in general darkening everything with the pitch of death.

Don Giovanni is the Italian translation of the more familiar Spanish name Don Juan. The Don is a notorious player, even keeping a glory journal numbering his sexual conquests, racking up hundreds in each city he visits. Interestingly, it is said that Casanova, the original womaniser, actually advised on the libretto and was in the audience when Mozart conducted the opening of Don Giovanni.

But this Latin lover is more than a libertine. He is a truly misogynistic and morally depraved Byronic character. He seduces, betrays, abandons and leaves in his wake a string of broken hearts, ruined reputations, resentment and rage. Not satisfied with taking all and sundry of the available single women as lovers, he steals a bride from her groom at their wedding celebration, and even murders a father who seeks to defend and avenge his daughter. What was seen in the classical age to be the fitting recompense for such a character becomes in this production a truly impressive finale. The stage floor opens its mouth, spilling forth foul vapours and groping ghouls, and Giovanni is swallowed into the bowels of hell.

Robert Jones’ set design is imposing and ominous. An ingenious use of perspective opens up the Joan Sutherland stage far deeper than would have seemed possible. An enormous central staircase,  black walls and pillars cast shadows and create creepy hiding places. Pouring out of the sides are skulls and skeletons. Amongst the crumbling vaults, crypts and rotting corpses, the horrors of the story appear even more horrific. The costumes are mostly black too and David Finn’s lighting is very low. Add to that claps of thunder and flashes of lightning and everything is intensely dramatic and morbidly atmospheric.

Luca Micheletti takes on the anti-hero Don Giovanni with more than a touch of a strut in his step, showing his considerable dramatic talent and experience. His vocals are also strong. Shane Lowrencev brings a gangly, oafish comedy to the role of Leporello, though sadly his bass-baritone sits below audible range pretty much throughout the performance, at least for anyone seated outside of the Premium or A-reserve areas. This is the case too for Juan de Dios Mateus as Don Ottavio. For this reason alone, the women by far outshine the men, as their upper register vocals ring clearer and louder. Jane Ede as Donna Elvira is my pick as best vocalist, with Eleanor Lyons as Donna Anna and Anna Dowsley as Zerlina also shining. Xu Zhong conducts the small classical orchestra, complete with fortepiano, with expertise.