Opera Australia’s Handa Opera on Sydney Harbour brings us another sensational spectacle this year with La Bohème. For anyone who has not yet been acquainted with the wonderful world of opera, this production of Puccini’s La Bohème would serve as the perfect introduction. There is also much to be appreciated and celebrated by a more opera-savvy audience. 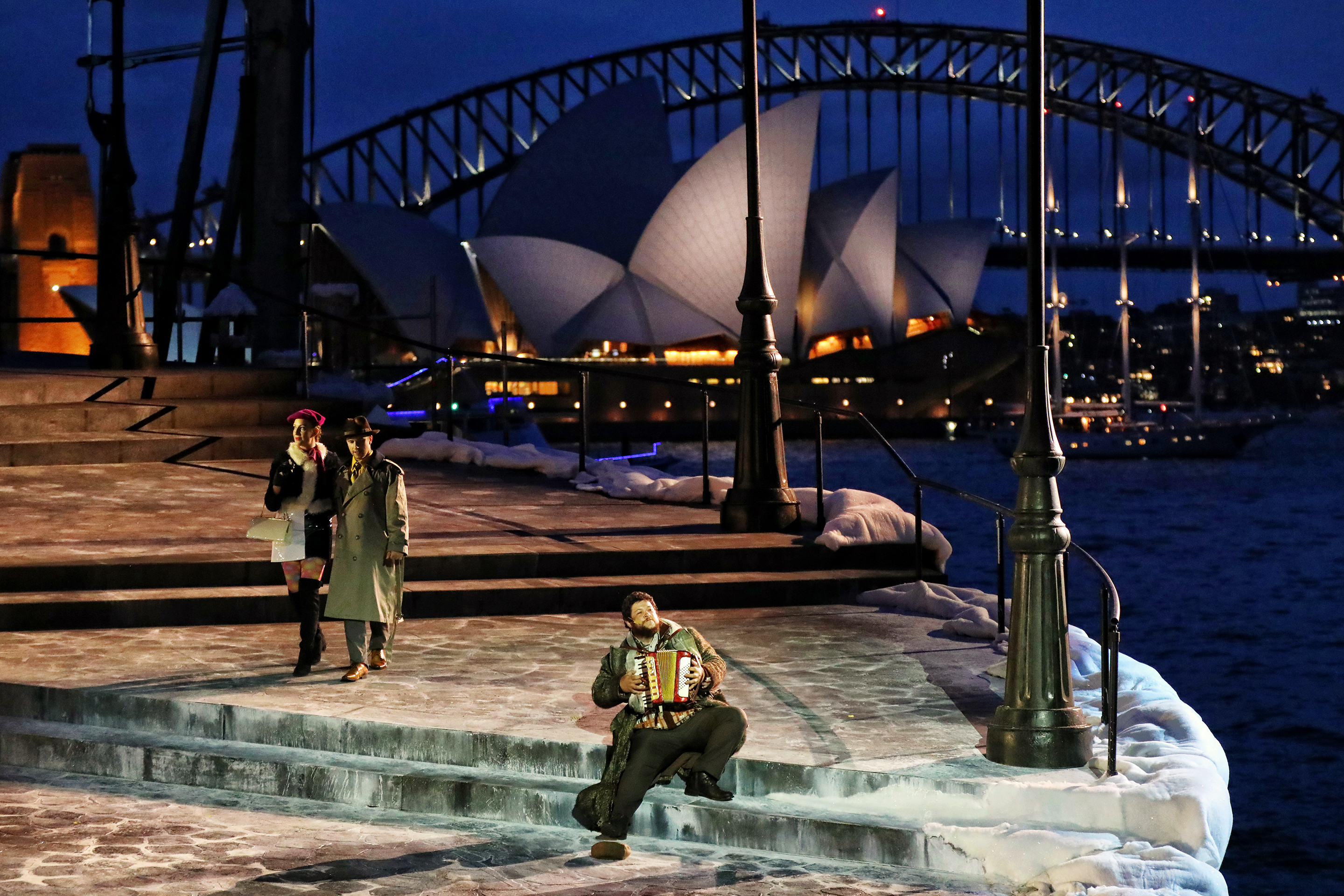 The story, which has inspired several famous modern adaptations, including the smash-hit musical Rent and Baz Luhrmann’s award-winning film Moulin Rouge, is a classic tale of youth and romantic idealism, of love and mateship. We can all remember and relate to the invincibility and infinite possibility of that all too short period in between gaining independence for the first time and the moment when the harsh reality of responsibility hits. For this reason, La Bohème transcends era and generation to be ever relevant.

Orignally, Puccini set his opera in 1830s Paris, which was the hotspot of free love and artistic interchange for bohemians from around the world. This production maintains the Parisian setting but updates the drama to the volatile political landscape of the 1960s. Four friends — a poet, a painter, a philosopher and a musician — with heads full of dreams and pockets full of nothing, live together in a near unfurnished inner city apartment. Cold and hungry, they value art over work, their romantic concept of a passionate love over the complexities of a relationship, and their freedom more than anything.

One of the draw cards for Handa Opera on the Harbour, other than the peerless vistas of the Opera House and Harbour Bridge, is the grand scale of the stage, which no indoor venue could house. In La Bohème the additional scope allows for a wide-lens view of the streetscape outside the artists’ rooftop room, in which the drama is usually claustrophobically confined in other productions. The elevated central podium that is the artists’ loft is expansively encircled below by cobblestoned streets, where children laugh, buskers play, and lovers kiss. The streets are edged with fondant snow and impressive 6 metre-tall heritage style lampposts.  The extended set enables the audience to see the entrances and exits of characters, giving contextual insight into the proceedings and bridging the gap between the opera’s personal and public moments. 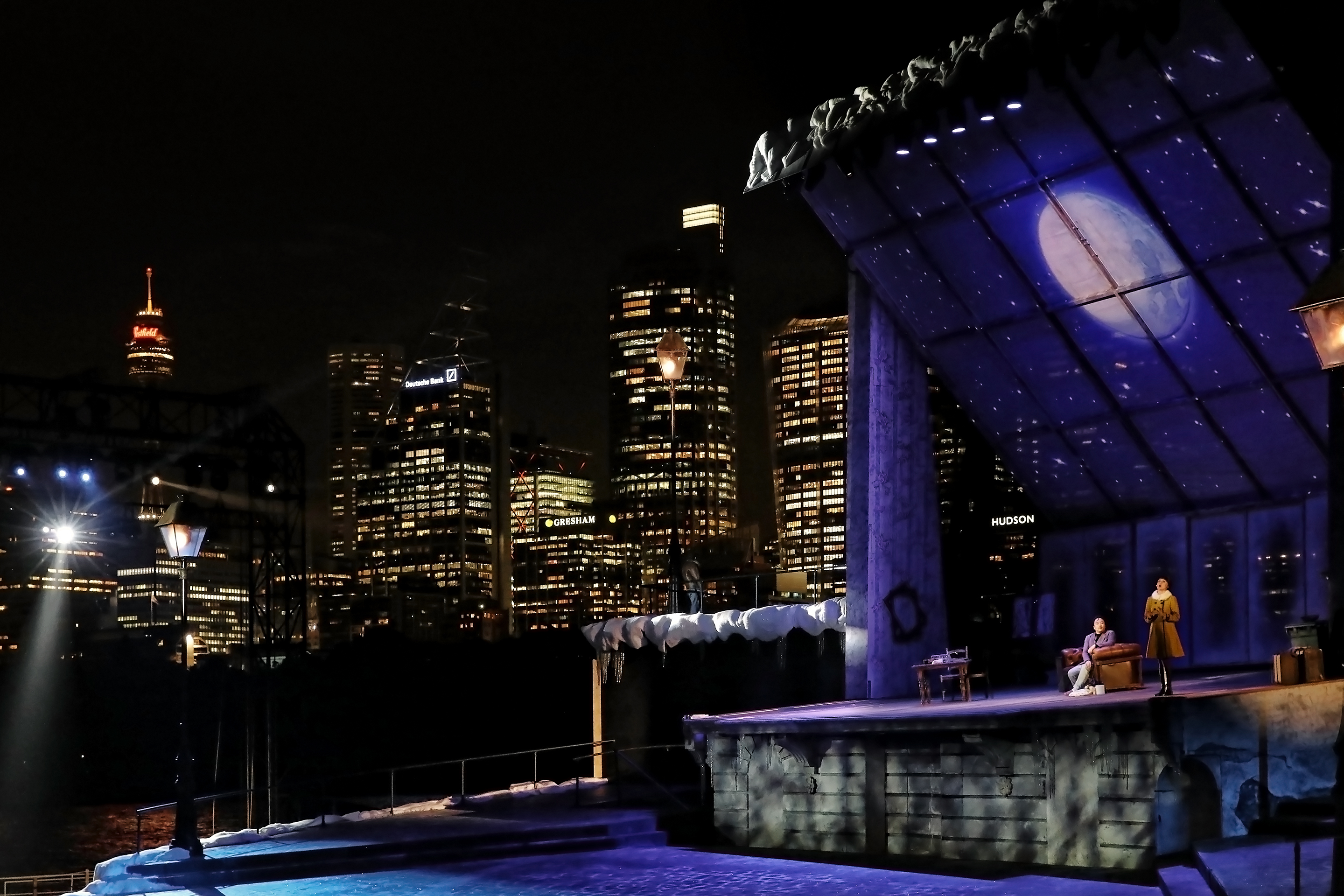 On a massive angled panel of dormer windows and a large screen to the right of the stage are projected the outside views of the Eiffel Tower during the day and the moon at night. Animated visual cues such as words, symbols and pictures are less effective, being too obvious, even approaching corny. For example, during Rodolfo and Mimì’s great duet, vision of swirling celestial galaxies, which could only be seen by telescope, not by the naked eye looking out the window, is supposed to add to the heavenly beauty of the moment, but rather threatens to detract from what is otherwise perfection.

The first half of the opera is all fun and romance, with the friends and lovers enjoying their innocent idealism. The audience smiles throughout, especially during the famously flirty ‘Musetta’s Waltz’, and relishes the exquisite beauty of Mimì and Rodolfo’s duet. The traditional fireworks display, which has been a feature of each of the last seven Handa Operas, does not disappoint. Coming just before interval, it creates a spectacle to rival New Year’s Eve. With this huge crescendo of excitement, the show thus reaches its spectacular climax halfway through, long before the dramatic climax. The natural result of this is that, despite the copious amounts of ‘snow’ that fall from the Sydney sky for the first time ever and the burnt out cars desposited on stage by two impressive cranes situated mid-water, the second half fails to live up to the first in terms of entertainment and impact. It is impossible not to feel the post-interval slump in energy. 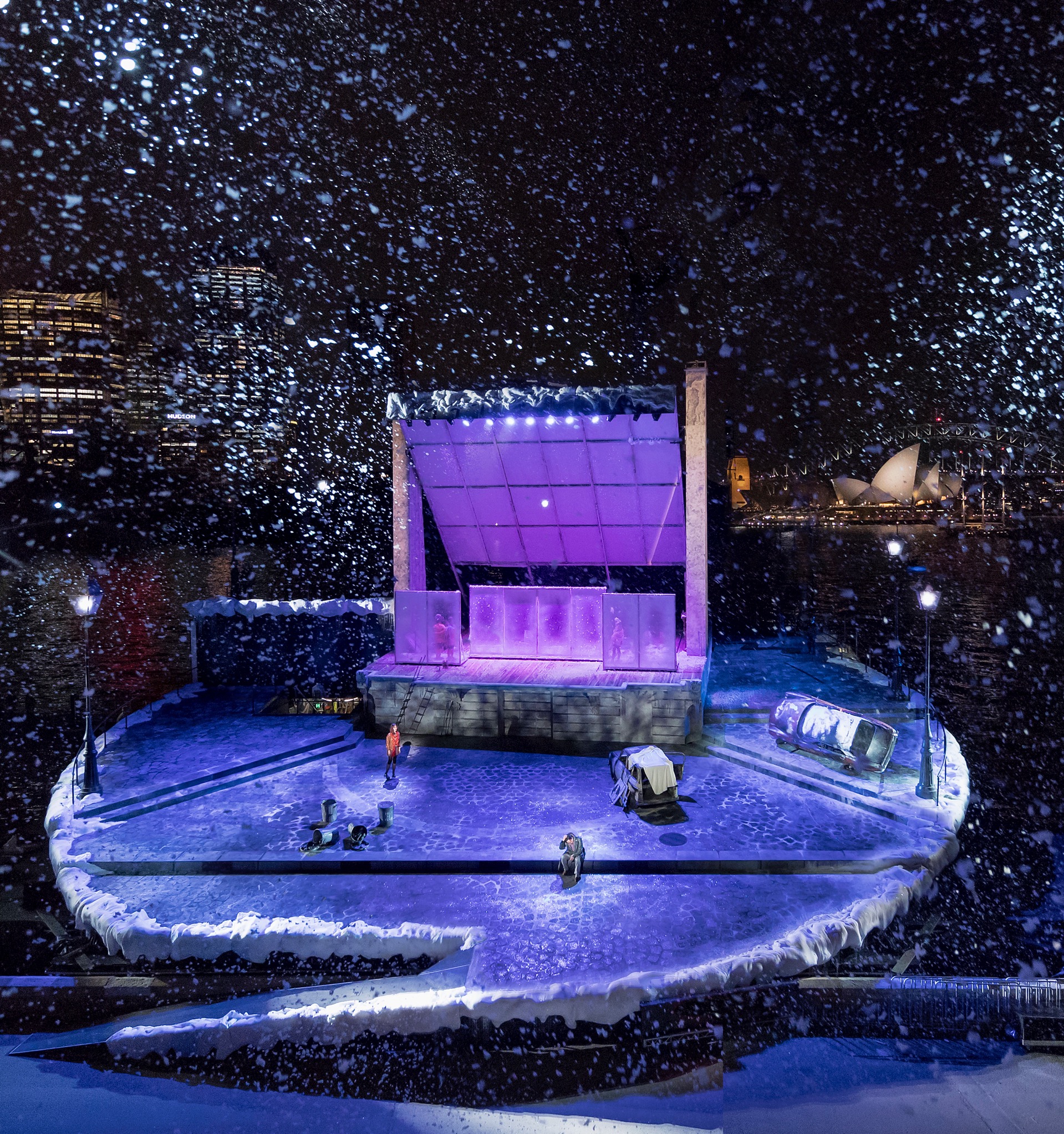 A romantic tragedy as La Bohème, however, is never going to end on a high, with an explosive finale that has everyone jump to their feet and burst into applause. It must at some point draw back to allow for the descent into the close. Director Andy Morton does not fall into the trap of populace pleasing, letting effects and grandeur overshadow the drama of the opera. He zooms in from the earlier wide-lens city view and focuses closely on a much smaller domestic image, achieving in Act Four a depth of intimacy unexpected in such an open, grand setting. The bond between the four friends and the two pairs of lovers is authentically drawn and results in a genuinely moving final scene. The actors’ engagement in the sadness of making the dying Mimì as comfortable as possible and then their engagement in the weight of her loss translates to the audeince’s engagement in the sadness and loss as well.

Casting in this production cannot be faulted, with impressive performances in particular from South Korean tenor Ho-Yoon Chung as Rodolfo and Romanian soprano Iulia Maria Dan as Mimì. Chung’s voice is strong, intense and highly expressive, with a definite romantic tone to it. He is also a convincing actor, bringing real impact to the tragic climax with his powerfully portrayed feelings of distress. Dan’s Mimì appears to be delicate, and of course she is supposed to be consumptive, however she produces a rich, round sound, full and womanly. The two lovers are vocally very well matched.

Australian soprano Julie Lea Goodwin and baritone Samuel Dundas exude a chemistry that can be smelled from the seating bank, making their interactions as bickering lovers Musetta and Marcello perfectly believable and involving. Goodwin bursts with personality and manages the mood modulations of her character well, from saucy minx, to defiant aggressor, to compassionate and generous angel. Her vocals, as her acting, are bright, thrilling and yet composed. Dundas’ masculine baritone makes for a forceful, assertive Marcello and a magnetic complement for Goodwin.

Being an outdoor performance, the singers are of course microphoned. This allows us to easily listen to the voices which we sometimes have to strain to hear inside an opera house with an orchestra drowning them out. Purists will always prefer the natural voice and acoustic music over amplified sound, which can often be too loud, one-dimensional and unbalanced between the treble and bass. In this case, the best possible result is achieved, given the outdoor setting. The sound is crisp and clear, with resonance in the vocals and balance between the vocals and the instrumentals. The singers are forward placed in the sound design, allowing their talent to shine through and the emotional impact in their voices to be felt.

The Opera Australia orchestra, although sadly heard and not seen,  gives a lush performance of Puccini’s magnificent, soaring score with its’ broad-sweeping, long-limbed melodies that lend greatness to the stories of these ordinary people. It is a miracle that conductor Brian Castles-Onion manages to maintain perfect pace and time with the principals and chorus despite being tucked away out of sight below podium. It is one of the only drawbacks of this set-up that we do not get to watch the musicians in action and see how finely dramatically attuned they are with their onstage colleagues. 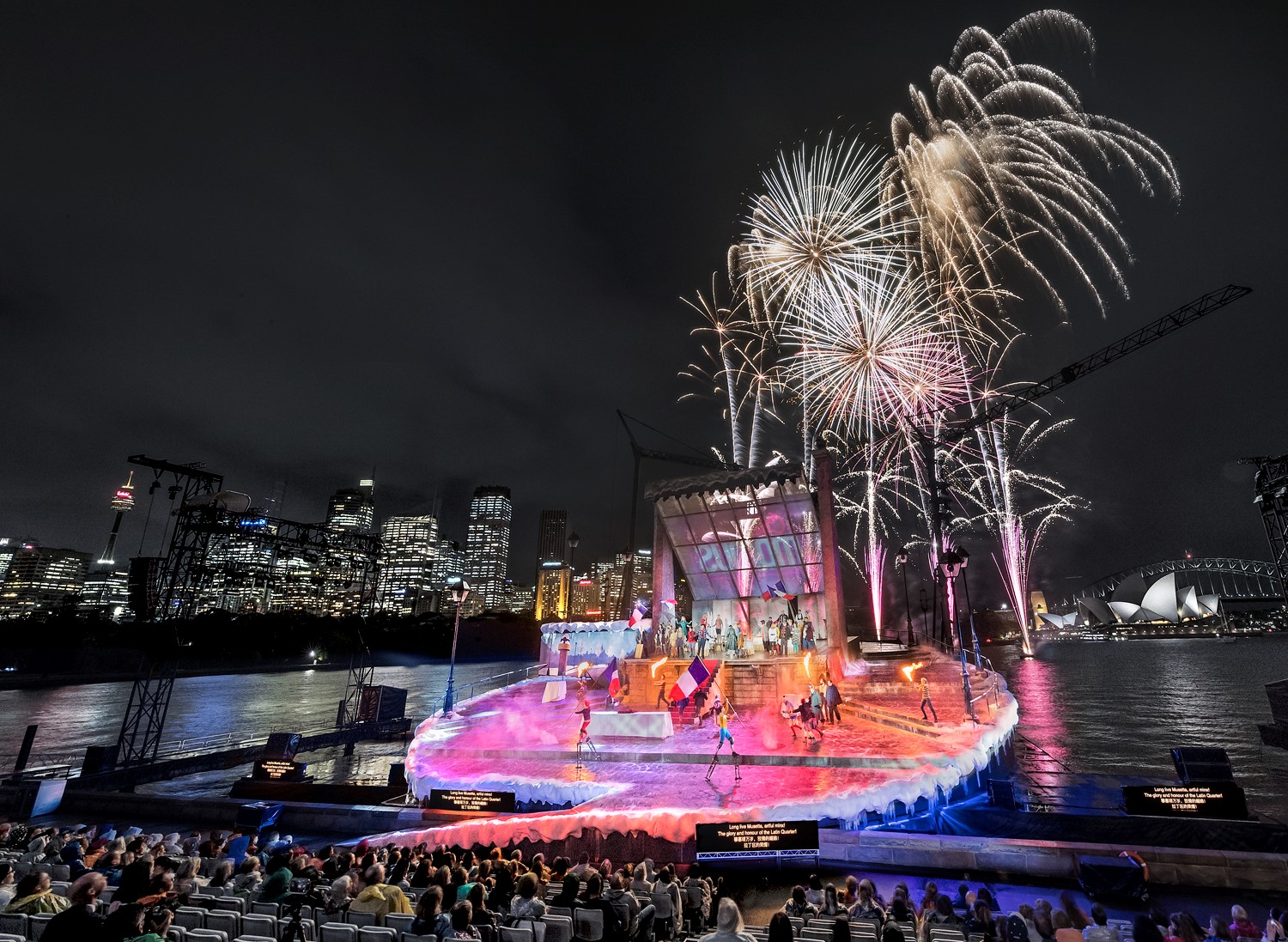 Handa Opera on Sydney Harbour is known around the globe as one of the world’s finest outdoor opera experiences. Combining spectacle and intimacy, this La Bohème is the ultimate opera for newcomers and aficionados alike — entertaining, impressive and genuinely moving.