When my journalist daughter, Alicia, called to invite me to go with her to the Bobby Darin musical Dream Lover at the Lyric Theatre, I accepted eagerly – so eagerly that I even offered to write the review for her myself! You see, when I was a little girl, Bobby Darin was bigger than life. My parents played his music at home and I learned the words and sang along almost daily to many of his songs, such as Mack the Knife, Splish Splash, Multiplication, Beyond The Sea and Dream Lover.

Dream Lover is the true story of the extraordinary life of legendary singer, song writer and actor, Bobby Darin, who was married to Hollywood actress Sandra Dee and with whom he had a son. Director Simon Philips did a spectacular job of compressing a whole life of highs and lows as well as an impressive Hall Of Fame musical career and Oscar-nominated film career into a two-and-a-half-hour musical.

Musical theatre and cabaret star turned TV personality, David Campbell, was dazzling as Bobby. Not only did he resemble Darin in size, looks and spectacular singing voice, but he had a similar family secret as did Darin. When Campbell’s father, legendary Jimmy Barnes, lead singer of Cold Chisel, came into his life at the age of 10, young David learned for the first time that his mother was not his sister and his grandmother was not his mother. Bobby Darin, at 32, learned a similar family secret. He was never the same after learning this and felt betrayed by the ones he loved the most for keeping this from him for all of his life. Campbell brings real emotion to the stage in the scene when the truth is revealed. You have to experience betrayal such as this to do justice to the moment, and in this Campbell was perfect! It’s a moment of extreme intensity and he portrays a fittingly tormented reaction to this bombshell in a very natural subtle way, without over-acting. 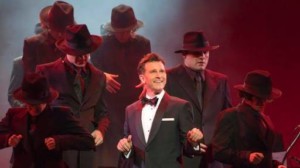 Campbell was impressively present on-stage throughout the entire performance, except for the odd quick costume change, and he continued at full energetic momentum from beginning to end, up and down the stairs, singing and dancing, always with his enigmatic smile, belting out song after magnificent song with all the right moves to keep the audience on their toes the entire night.

Hannah Fredricksen played the part of Sandra Dee and lit up the stage almost as much as Campbell did. She delivered a beautiful vocal performance and showed great dramatic ability in her raw portrayal of the long-suffering wife of a creative genius, who is so wrapped up in his career that he barely notices his dutiful wife sitting at all his shows. Shockingly hurt and betrayed by her parents since early childhood, married at barely 16, then disappointed in love, she smoked and drank her life away, sadly but surely.

Caroline O’Connor played well, as she always does, a dual role as Bobby’s “mother” Polly Cassotto, and Sandra Dee’s mother, Mary Douvan. Other notable performances came from Marney McQueen as Bobby’s sister Nina, Martin Crewes as long-time friend and manager, Steve Blauner, and Bert LaBonte as Charlie, Nina’s husband. These were the individuals who were loyal to Darin through the rollercoaster of his personal life and musical career. In one touching scene LaBonte’s character Charlie tried to reach Bobby’s heart, reminding him that when he was young and very ill with rheumatic fever he overheard the doctor say that he would not live past 16. Charlie’s profound and timely words “in the threat of death he found life”,  made a deep impact on both Darin and the audience.

It was a real treat to have a medley performance from Frankie Avalon, Dion and Buddy Holly, as well as a scene in which  Connie Francis, played by Phoebe Panaretos, sang “Everybody’s somebody’s Fool”, a song I used to hear my mother sing often. This all brought back beautiful memories of my childhood. There was evidently a brief romance between Darin and Francis, but her rigid Italian background over-ruled her romantic feelings and she disappeared from the scene quickly.

Last, but by no means least, 11-year-old Kyle Banfield, gave an outstanding dual performance as a young Bobby and later as Bobby’s son, Dodd, who rarely saw his father, but loved him nonetheless. Banfield was animated and immediately likeable, capturing the spirit of the prodigious multi-instrumentalist, dancing, acting child that Darin was.

Mention must be made of the 18 piece band under musical director Daniel Edmonds who played the Piano expertly and conducted at the same time! There were over 40 singers, dancers and actors on the stage through the performance and all were outstanding. The lighting,  set design and costuming were old-school Hollywood glitz and glam. 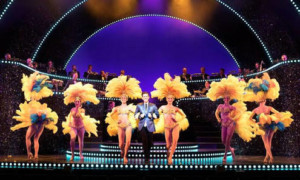 Bobby Darin truly was a musical genius, responsible for writing some of the best known rock songs of the 50s and 60s and some of the most repeated and requested jazz standards of all time. David Campbell, one of Australia’s most popular and versatile entertainers, excels and indeed is perfect in this role. All elements combined resulted in a standing ovation in the sold-out theatre. Dream Lover is a truly enjoyable and entertaining musical play, well worth experiencing by all ages, whether you know the songs like me or not. But hurry – the show closes at the Lyric Theatre on November 27. Tickets can be bought at http://www.ticketmaster.com.au/artist/2219718.
By June and Alicia Tripp

June is a wife, mother and teacher, with a passion for music, theatre and writing. Now that the little journalist inside her has escaped, keep an eye out for more of her reviews.

British Film Festival 2016: The Plus Ones’ guide to the movies to see