Josh Groban fans, musical theatre buffs and, dare I venture, women and gay men in general will be thrilled with the new concert series Stages, An Evening With Josh Groban, currently showing at Sydney Opera House. The American singer shines in all his glory as the angel of music that he is, in top musical form, better than ever, and delights the audience with his wit, charm and good looks.

It is incredible to me what a heartthrob Groban has become. I loved his music for a long time before ever I saw a picture of his face, a face which to me is a bit goofy looking. My personal love affair with Josh Groban is purely aural in nature. I could listen to him all day long. But scanning the audience on opening night, it is evident that there are women of all ages, and a few men too, who are more than a little enamoured of the man himself.

To illustrate this, take the program book for the concert: It is literally cover-to-cover with photos of Josh smiling, brooding, gazing dreamily into the camera, playing with his dog and fondling that oh-so-lucky microphone. My 16-year-old self would have been very happy to have scored some new posters to pin up on my bedroom walls. My 30-year-old self, however, sitting in the stalls, waiting for the concert to start, is flicking the pages searching for text of any kind – an article expounding on the song choices for the set, or an interview with the artist about his background and his passion. It could be the journalist in me or it could be that I’ve become old and boring, but looking at the people in the seats next to me, it is clear that I am alone in my dissatisfaction – all I see are faces pleased as punch, smiling longingly into the eyes that stare back at them from their open programs. Twenty-five dollars well spent, it would seem. 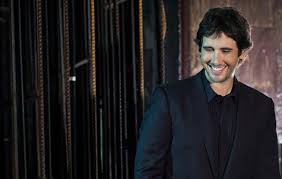 From the moment Groban walks on stage, dressed in all black smart casual, the oooohs and aaaahs start – “Oh he looks so handsome”, “I love the beard”, “What a man!”, are just some of the comments flooding my ears from all around me. Within the first 5 minutes he makes a dick joke, drops the S-word, imitates an Aussie accent and tells us about how he was picked on at school. The guy seems truly adorable.

When he starts to sing, I am mesmerised along with the rest of the crowd. His opening song is my favourite of the night – “Pure Imagination” from Willy Wonka and the Chocolate Factory. It is a beautiful version of a magical song and suits Groban’s rich yet innocent and flexible baritone to a tee.

In a similar vein, Groban chooses to sing the classic “Over the Rainbow” from The Wizard of Oz. Whilst his technique cannot be faulted – his voice is, as always, exceptionally pure and accurate – and whilst the arrangement is pleasant, it is a shame to see an artist of this caliber sing such an iconic piece without really doing much to change it and make it his own. There is one moment, about three-quarters of the way through the song, where he deviates from the well-known melody and starts to creatively improvise his way up to what promises to be an exquisite climax, but unfortunately, after tantalising us with melodic and rhythmic surprises for all of eight bars, he then eases back into the familiar tune and ends the traditional way, on a decrescendo, which for me is an anti-climax.

The rest of the playlist for the night is a medley of showtunes, some famous, others from obscure off-Broadway musicals – a chance for the musical theatre buffs to convene and shamelessly celebrate. Personally, I like me a bit of Phantom here and there and who doesn’t like Gershwin?, but I don’t exactly know every word to Carousel and A Chorus Line. Some of the song choices strike me as odd and a bit of a waste of space in the short time allotted for the special privilege of seeing a talent such as Groban in the flesh. One in particular which I feel doesn’t work so well in a concert environment as it surely does in the context of a play, is the number “Finishing the Hat”, from Sunday In The Park With George. Despite the fact that Groban gives a summary of the story of the musical and what the song is about, without the drama, the lone lyrics – “starting on a hat, finishing a hat, look I made a hat…” – lose their metaphoric significance and feel rather random inserted into a mix-tape kind of scenario.

One definite stand-out moment in the concert is the closing song of the first half, “Anthem”, from the cult musical Chess, written by Benny and Björn of ABBA. This incredible song, aptly titled, as it indeed sounds like a national anthem, is grand in scale and really showcases the power and range of Groban’s voice. It is moving, uplifting, almost spiritual. Sadly, the teen singers of the Fort Street Chamber Choir can barely be heard over the band and the orchestra, but their presence adds to the spectacle nonetheless.

For those in the audience who, like my husband, accompany their partner to concerts such as this without much prior knowledge or passion, it is a major disappointment that the one song they are familiar with and waiting for, “You Raise Me Up”, gets benched. As my husband puts it, it’s like going to see Billy Joel and he doesn’t play “Piano Man”. Understandably, Groban is taking his new album on tour and wants to exhibit his new material, but I would suggest it would be a wise and reasonable decision to throw in the most famous, most popular oldie for good measure, perhaps in an éncore.

Australian soprano Claire Lyon is a welcome guest performer, sharing the stage with Groban for the love duet from Phantom of the Opera, “All I Ask Of You” and for two solos, “Wishing You Were Somehow Here Again”, also from Phantom, and “I’m In Love With A Wonderful Guy” from South Pacific. She is a vision in her two stunning ball gowns and her voice, perfectly trained, with clear articulation and just a touch of an Australian accent, is a delightful contrast to Groban’s.

Groban’s band includes the talented guitarist Tariqh Akoni, who switches instrument up to five times per song, and pianist Sean O’loughlin. The abbreviated Sydney Symphony Orchestra musicians do a wonderful job of accompanying and fleshing out the melodies.

Song choice and arrangement aside, Groban cannot be critiqued in terms of technical prowess and artistic finesse. He remains for me, one of the best voices of our age. Moreover, he is in top musical form at the moment. I have not heard him sing better. He does not miss a note and gives his all in every song.

Josh Groban is performing again at the Concert Hall of Sydney Opera House on Wednesday 20, Friday 22 and Saturday 23 April, then going to Melbourne and Brisbane.
– Alicia Tripp

Alicia is the Theatre Specialist for The Plus Ones, reviewing the premiere concerts, symphonies, operas, ballets and stage shows in Sydney. She is a seasoned arts and music critic, as a former journalist for the ABC Limelight magazine and State of the Arts. She has a degree in Media & Communications, English and Music from the University of Sydney.
Disclaimer: The Plus Ones were invited guests of The Sydney Symphony Orchestra