At the zenith of civilisation in the early 21st century, we like to think of humanity as polished, ethical, democratic.  Force Majeure in Danielle Micich directed You Animal, You, strives to unveil the subliminal drives within us that predate this surface veneer. An exciting premise, with excellent set, site, and performances, this piece has elements which grab you,  with colourful costuming, grace and challenge. It’s also a witty, ironic comment on the gross vanitas of the first world, using deep physicality to convey its thesis. Dance here is not just about keeping time with the music – this work interrogates the medium and receiving culture simultaneously.

Dance today is so exciting. No longer confined to rarefied specialist modes and homes, it has been let out of the cage and can say anything via any mode in many ways. From a much respected company, this work from five cross-disciplinary artists embraces all the possibilities dance-theatre now chooses from. 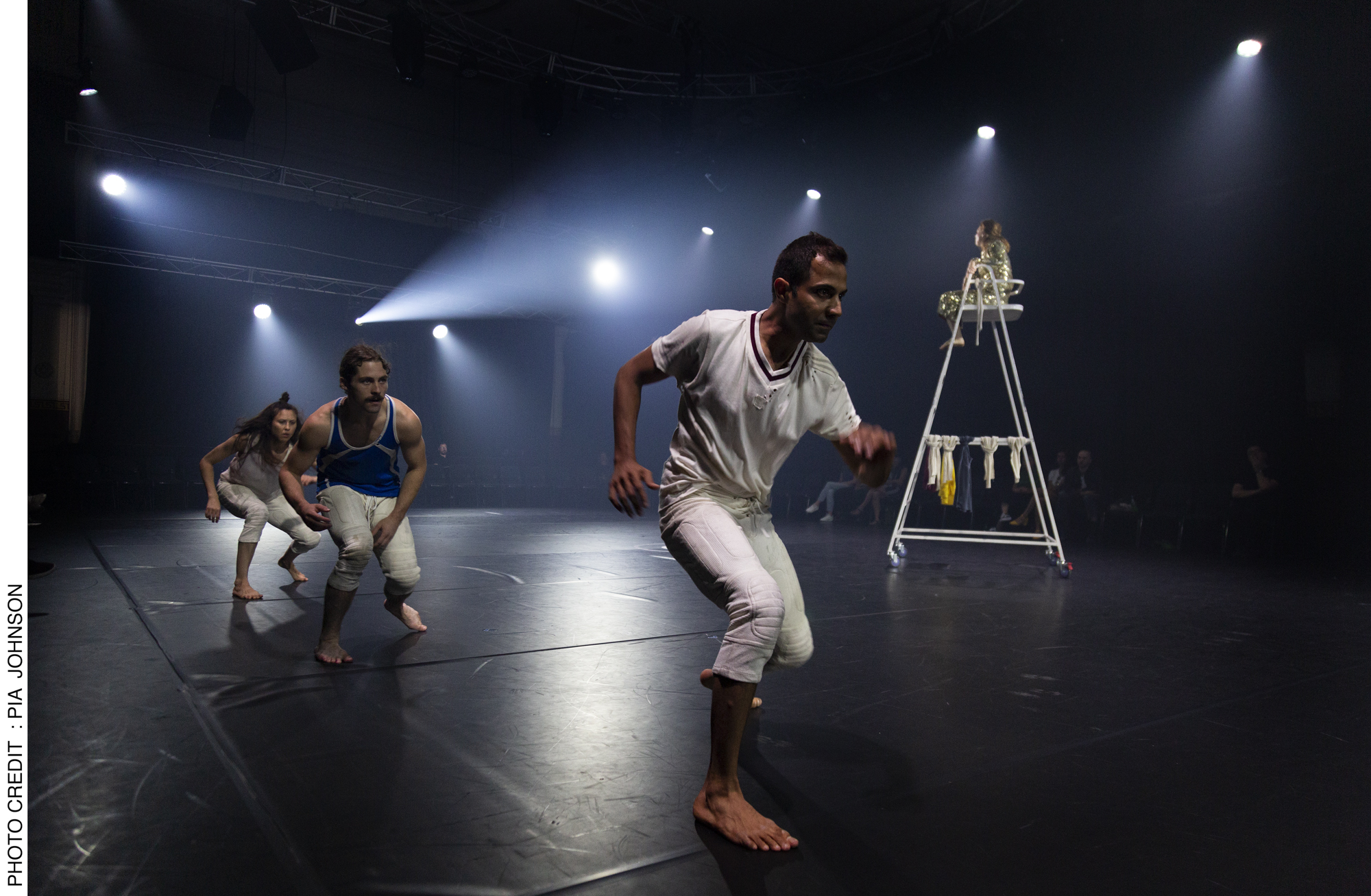 Dance today straddles the ‘event’ realm and this work’s set approaches this sphere with it’s cavernous, circus-like arena inside of North Melbourne Town Hall’s magnificent Victorian main hall, Arts House, a venue offering a program of artists and works that refuse to perform within the rules. Just to see the sheer size and feel of the space is surprising.

This work reveals the repressed urges that live within each of us, pointing to standard Freudian theories on maternal complexes, sex and procreative drives, the role of ego and vanity, and various others similar to the seven deadly sins. Spoken word is inserted throughout. It translates like a digital game with five different characters, some of whom we cheer for, or dislike, with multiple perspectives. We observe the action in the round as the cast do too, it’s all about participation and ritual. Props include a tall tennis umpires seat, a step ladder on castors, which is moved about the space by various cast as weapon or signifier,  and an oversize clear plastic bag in which bodies are captive to and birthed from, all adding to the spectacle of this work. Kelly Ryall’s live music composition and mix is electrifying, and Damien Cooper’s playful lighting design ironically refigure the ‘entertainment’ message with spotlights, shadow and haze used to clever effect. 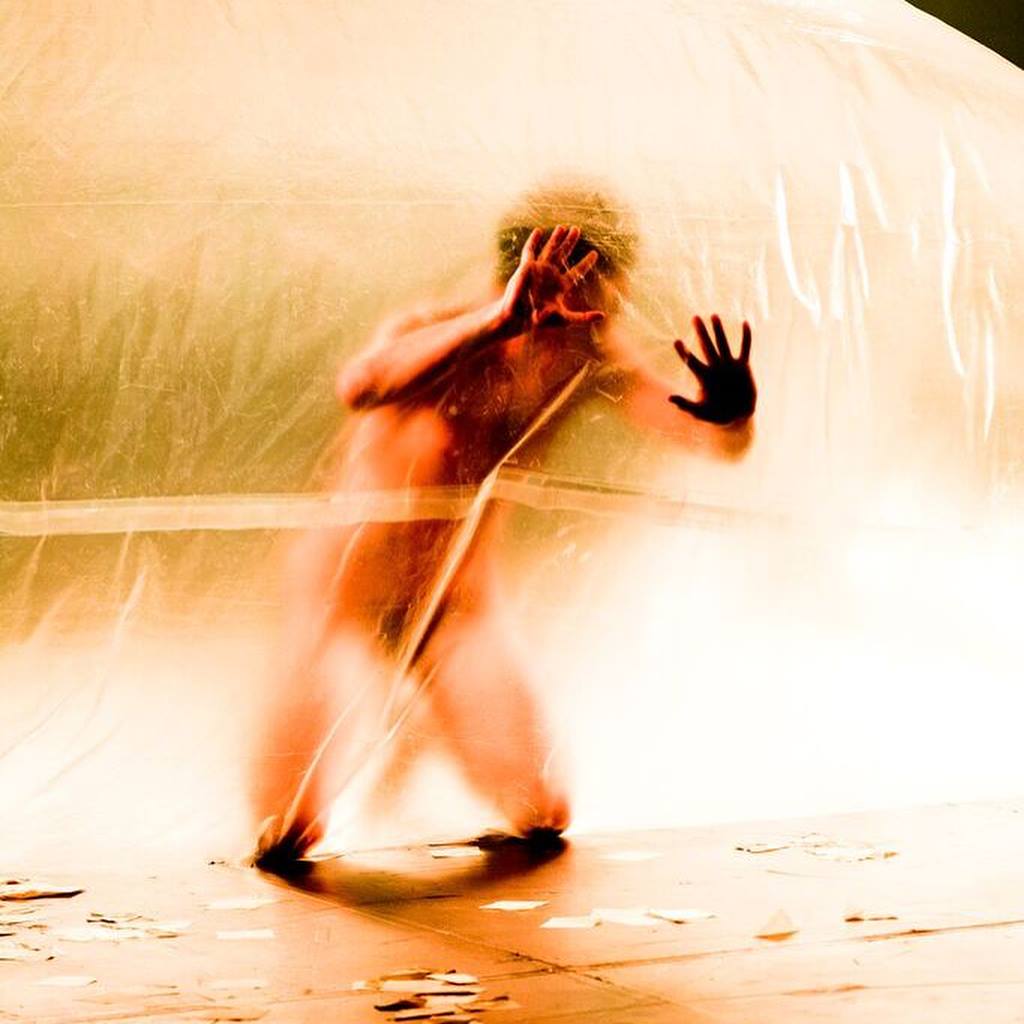 Early, Raghav Handa smoothly moves as the complete dancer, with well articulated bodily expression and intuitive extra-sensory flow. Highly watchable Ghenoa Gela brings dramatic intensity, prowling the perimeter, the dredded outsider who challenges the power structures of the centred. Dancerly Lauren Langlois offers a great solo, of quirky chatter in sync with everyday movement made absurd. Hayley McElhinney is the central Mother at war with her ‘children’, and offers a strong presence in marvellous Michael Hankin costume of shimmering gold sequins. Jack Riley saves the best moment ’til last with his ‘birth’ expulsion from inside a giant inflated plastic bag. His movement sequence once outside is both beautiful and timeless, reminding us of the 19th century practice of artistic nude modelling to groups of people within cavernous studios.

The work is confident, articulated in lay terms and doesn’t preach, as much contemporary dance does. It’s easily understood by any audience. So readable, it at times seems like reality/voter television we see so frequently on our commercial screens in shows where we view for entertainment the personal dramas of the merely mortal in The Bachelor, Survivor, or Big Brother, and shows which feature sporting and gladiatorial competition. Both audience and cast mingle as the show moves forward. 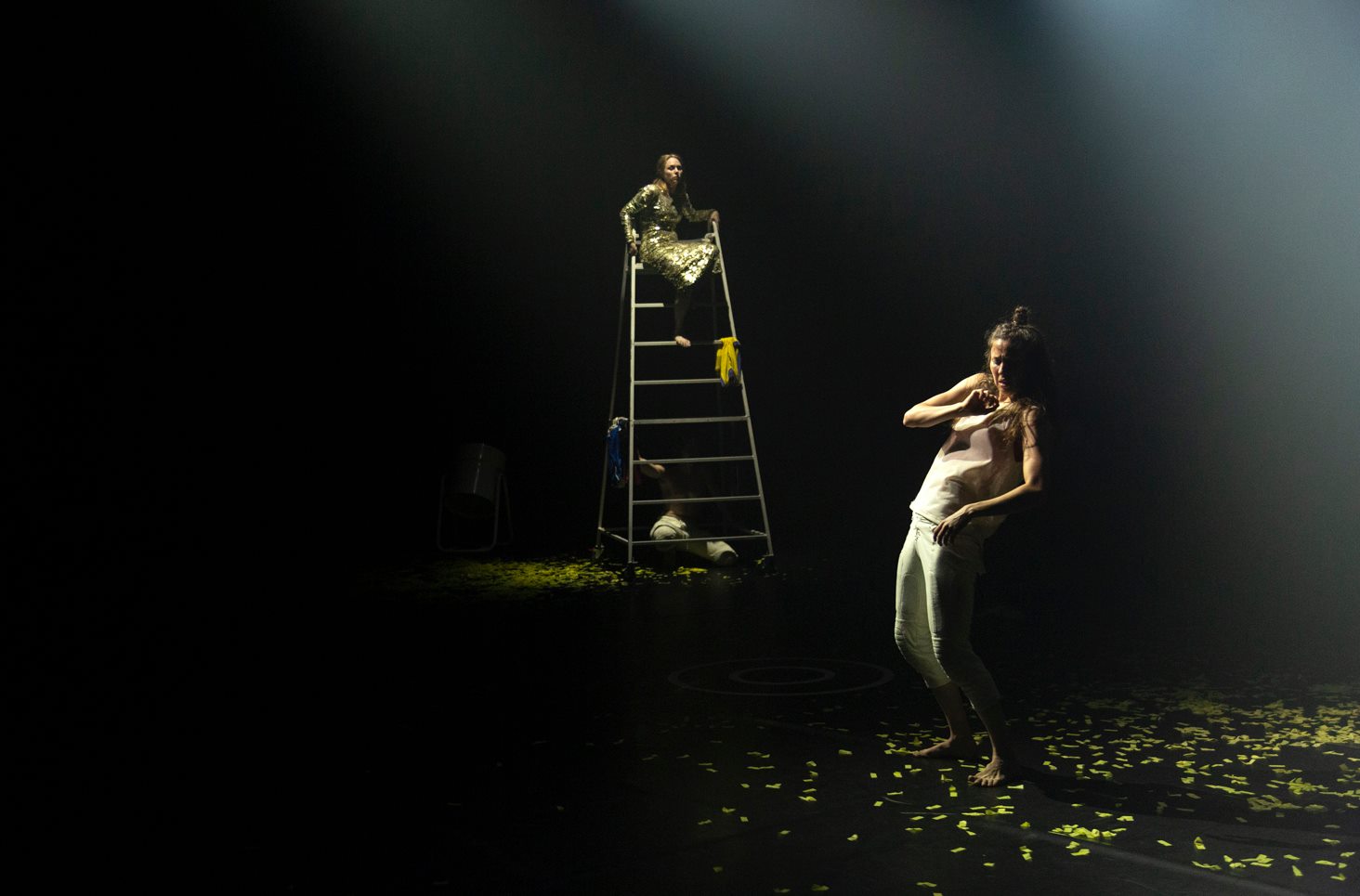 Hayley McElhinney as Mother and Lauren Langlois as daughter.

By name a company wanting to pack a punch, their concept is bold. Dance struggles in the culture realm when pitted against televisual product, theatre, film, or live music which are readily available for short-term fixes via devices, on screen. Being wordless, traditional dance presentation often mystifies audiences and seems elitist, a world for experts only, closed to their understanding.

Dance, in fact, is ancient ritual and tied to all human experience, a quality this work celebrates beneath its superficial story about the psycho- dramas of being human. This work is not just a look at the human spectacle. More excitingly, it’s a critique of what the dance platform does and can be, and the realms it can interrogate. This is the big uncaged creature that Force Majeure releases to wander the space and you will thrill to watch in awe.

This show has haze, nudity, adult concepts, and depiction of violence.

Disclosure: The Plus Ones were guests of Starling Communications.

Melbourne International Comedy Festival 2019: The Plus Ones’ Guide