If there is one show you see this year, let it be this. Hometown pop sweetheart, and famed French singing sensation, Tina Arena, with Opera Australia, proves it’s been worth the wait to see her sing here again, in partnership with John Frost and David Ian, presenting the famed 1978 Tim Rice and Andrew LLoyd Webber monster success,  Evita- The Musical. This is the original West End and Broadway production with many of the original team behind it.

It’s not an exaggeration to say this show is 100% professional, sonically perfect, with a world class set, costumes, and choreography brewing up a storm to delight audiences nationwide. It’s once in a lifetime you will witness such a quality production across all disciplines. Add to it the return of a superstar of the calibre of Arena, who could make all notes sound as if delivered direct from heaven, and any performance will be an unforgettable, once-in-a-lifetime moment.

This show has the hits a universal public has come to know and love – Don’t Cry For Me Argentina, Another Suitcase In Another Hall, You Must Love Me, The Actress Hasn’t Learned The Lines You’d Like To Hear, And The Money Kept Rolling In...and countless other stirring tunes will see you singing along if you were raised in the 1970s, or a musical theatre lover like me. Hours spent spinning the vinyl whilst singing into a mirror call to mind how fabulous all these songs are, musical magic. 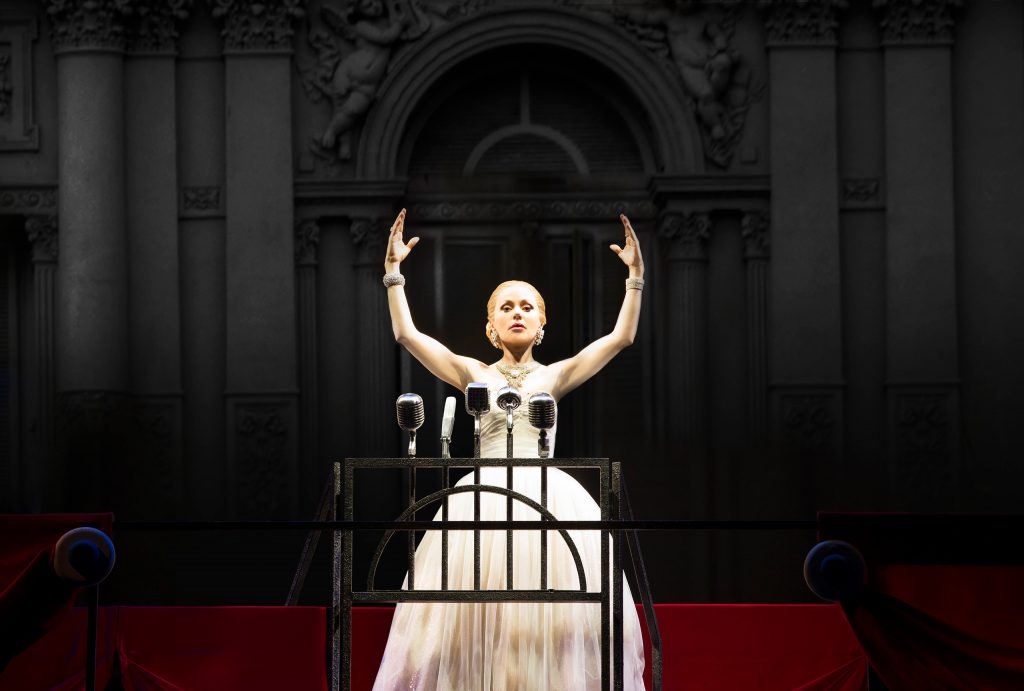 Eva Peron at the height of her, and her husbands’, political success

Tim Rice’s song book has perceptive and moving lyrics that perfectly transpose the story of the poor teen who rose to fame as actress and the later second wife of Argentinian President Juan Peron. Born Maria Eva Duarte, a figurehead and leader in her own right at the top of her career, she had escaped rural poverty in the dancehalls and film industry of Buenos Aires. Che, a revolutionary member of the public, narrates her rise to fame as she supports her husband’s bid for the 1946 Presidency. Tall, leggy, with dyed blonde hair and impeccable grooming, Eva played a classy lady, comfortable dealing with all power types. She organised charity events, and, later, established the Eva Peron Foundation, a charity, despite accusations of money laundering, and championed women’s suffrage, setting up the Female Peronist Party.

At Juan Peron’s second attempt for election, the country’s economy is on the wane, and so, too, is Eva, falling sick and passing out at public events. She is just 33 years of age when she dies of cancer in 1956, and the nation mourns her, a spiritual mother. 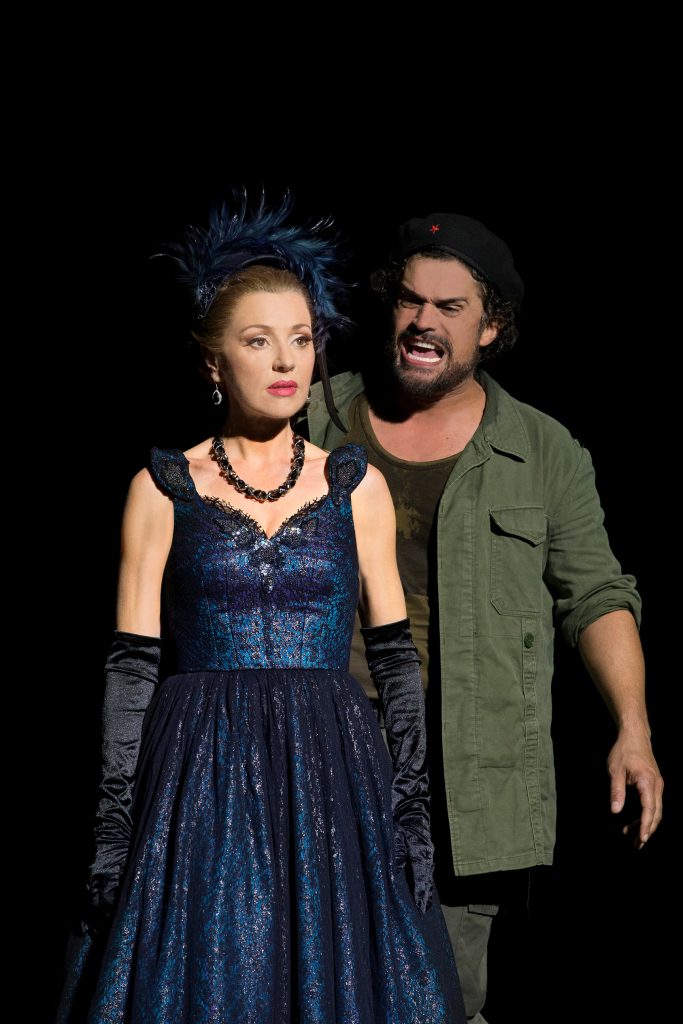 Eva following success, with Che commenting as the ordinary public looking on

Arena is the real deal, a perfect stage diva in the best tradition. Any moment she is solo, spotlit, on stage you can hear a pin drop. She doesn’t disappoint, rewarding every single ticket buyer with the perfection that is her own, unique voice. Having served many tours of duty in the pop world, the highs, and the lows, and after leaving our shores to stake out a highly successful career in Europe, it’s a huge statement for her to return home and grace our stages with her exceptional craftsmanship.

There are resonances between Arena’s early career, and the ambivalence of Australian audiences towards her and her success, just as Evita experienced a love/hate affair with her own public, and it’s electrically thrilling to see Arena capture the dark and light of this dramatic character. We experience a frisson as much of this story mirrors parts of Arena’s own,  of adoration, then rejection, and later embrace.

Kurt Kansley as Che, with Paulo Szot as Juan, are perfect matches for the strength of Arena, with strong, timbrous voices, great body work and charismatic presences. The cast as chorus have stirring voices which they use to convey the complex emotions surrounding Eva’s life and life choices, and include a cast of juniors getting the experience of a lifetime on stage in such a production. 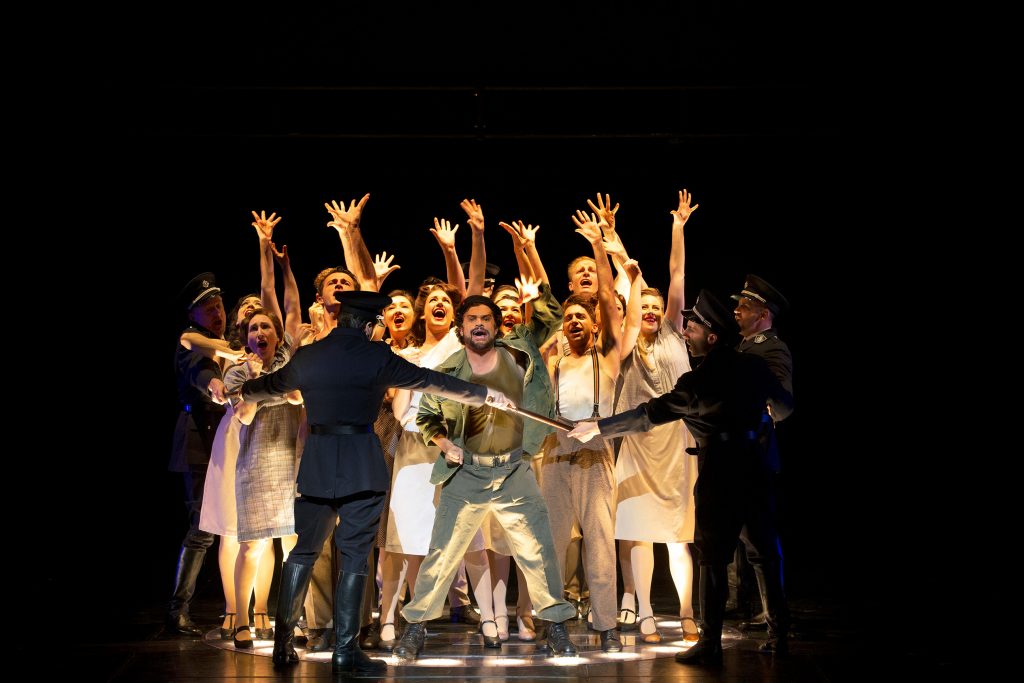 The full cast, a talent-rich ensemble

Everything about this production is finely tuned, and we are its lucky recipients. Legendary Broadway director Hal Prince (winner of 21 Tony Awards) is joined by Hal Prince alongside fellow original West End creative team members choreographer Larry Fuller, and designer Timothy O’Brien. The sets, lighting, and costumes tell as much of the story as the lyrics and music, and have to be seen to be believed they evoke the era so well. Musical Director Guy Simpson passionately commands his ensemble. This show is the whole package and is a first class affair. Add in the miraculous delight of Arena singing of stardom and the demons of fame, the irony and realism gets you and you fall hook, line and sinker for this marvellous version. It is we who are the lucky ones.

Tell everyone, take anyone. Fly interstate or internationally to make it to this season.To say you’ve seen and heard Arena in this role is a takeaway you will never repeat. She’s our girl, she’s one of a kind, and she delights her legion of adoring hometown fans as she personifies the local-girl-made-good.  You will never regret seeing this show… but you will regret missing it.