Things turned upside down in this decadent, embellished romp with original compositions and superb music being the unique ingredient on an exciting stage littered with Australian performing greats, Melbourne Theatre Company’s Simon Phillip’s Twelfth Night will see you chuckling in your seat with its impish charm. It’s a chaotic, vivacious rendition, with lush costuming, poise and poses as commentary on excess and power has that’s pulled out all stops. We feast our eyes, ears, minds and joy on the marvellous madness we see enacted as we would enjoy any end of year celebration time amongst our community. This play sees the social order turned askew.

Dissemblance, simulation, aspiration, pretense –  it’s that time of year: Saturnalia, aka, the festive season. As it was in 1601, at The Royal Court, or in the Inns of Court where lawyers honed their craft, our Southbank was abub with mischief and merriment as the Lord of Misrule turned things on their head just as they would have done in early 17th century London. Masters play servants, women act as men. Fools prevail wisely. The wealthy and powerful act like fools. This topsy turvy universe is the perfect theme as we approach the silly season- summer, holidays, celebrating the year, time with family, gift giving, forgivenesses… and MTC’s production is as good and as mad as anything Elizabethan. We even see a real slapstick on stage! 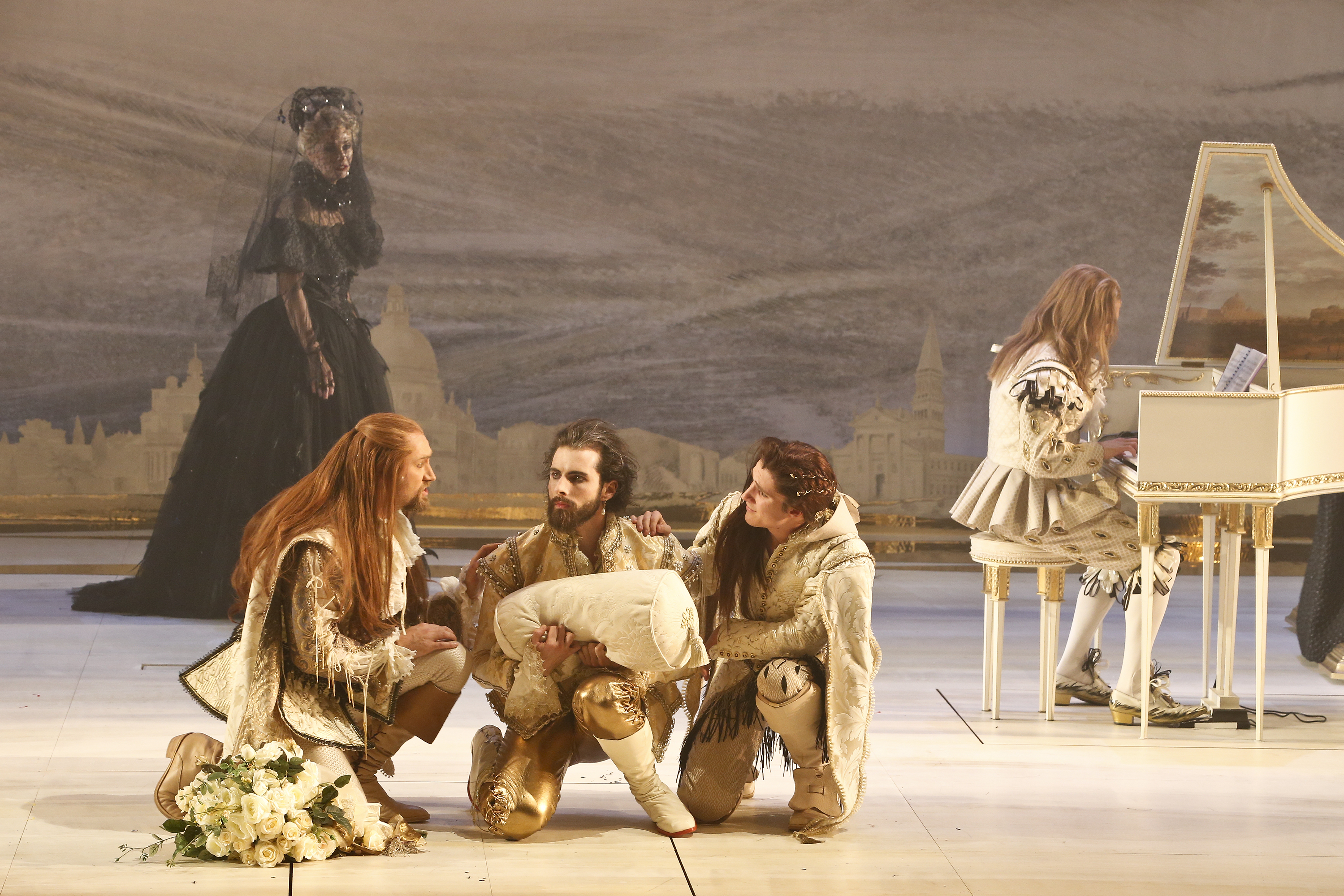 A play performed either at the twelfth night after Christmas, or in January early in the new year, its sub-title What You Will, concerns mismatched romantic infatuations. Separated twins Viola and Sebastian are lost when shipwrecked. Years later, Viola returns to Ilyria disguised as male Cesario, at the Court of Duke Orsino( who she falls in love with). She is his love emissary sent to Countess Olivia to court her hand  with Olivia instead falling in love with Cesario, a woman acting as man. A comic sub-plot makes fun of the lower and upper classes, with a group of servants, stewards, and lords intermixing. The famous clown character Malvolio is Olivia’s Steward, convinced by servants and bawds his lady loves him and wants him to dress in yellow tights, with cross-gartered ribbons, and to make silly faces at her. He follows suit with hope of great outcomes.

This troupe is in experienced hands when it comes to blockbuster successes. Simon Phillips brings out the bawdy Bard of revelry and the cast extend the line only further with their outre shenanigans, comic ridiculousness, amping up the playfulness of the work. The cast is a list you won’t want to miss seeing together on one stage. Yet hero of this production is its music. Original compositions by Keir Nuttall and Kate Miller-Heidke, performed live by a troupe of musicians and led by the priceless Colin Hay, sing us into sweet musings. Many of Shakespeare’s famous lines here shine and it is heavenly to hear them presented musically.

Hay brings us a gruff, sad Feste, the clown/fool, full of the wisdom of living and perhaps tired of it, and in his typically Renaissance flourished pants, is very much a redolent fool in the great tradition. Hay’s voice is superlative- honeyish, wistful, deep, gravelly, profound. It is worth seeing this show just for the work this team have done with song. 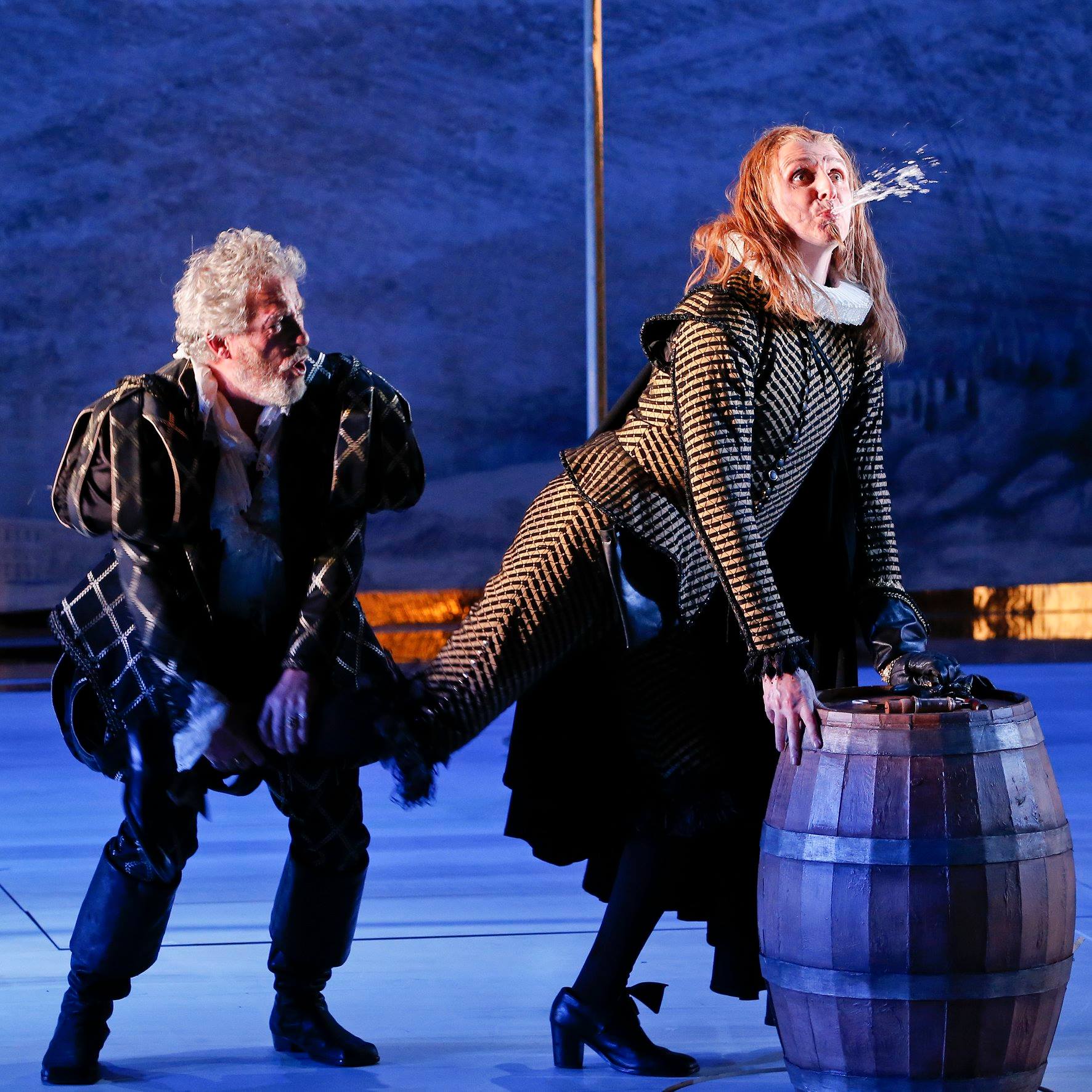 Richard Piper plays the inimitable offensive and irascible old fool, Sir Toby Belch, an aged alcoholic with charm a’ plenty. A great actor with Shakespearean brilliance, he allows the infamy of his character to shine, charming all as he missteps. His sidekick, our own famed clown, Frank Woodley( of Lano And Woodley), is the maligned Puritan killjoy Malvolio, whom the both the working-class cast, and audience, take delight in humiliating publicly. Woodley brings Sir Anthony Aguecheek to life as a lithe, foppish fool who barely manages to stand up in his aristocratic heeled footwear. He is a great foil to the shorter Belch.  A scene where he appears drunk, with his arches rolling in and out, almost bringing about a collapse, is hilarious and reminds us of ourselves, stumbling home drunk, late at night challenged to find our house keys/front door/bed or to getting your clothes off and update your sleep program. My eyes were wet with jollity.

Esther Hannaford as Viola, a twin, lost at sea, separated from her brother Sebastian( who later reappears) compels in her pale pink Puss-In-Boots garb and had hearts aflutter. I enjoyed her diction, ironic tone, and robust presentation. When she and Sebastian are reunited late in the play, it’s hilarious to see two actors so alike on stage and you get the pow!visual effect the Bard’s twinning intended. Christie Whelan- Browne cleverly brings the Countess Olivia down to acting like an infatuated teenager. Tamsin Carroll is brilliant as Maria, Olivia’s excellent serving woman, with a razor sharp mind( and tongue) who experiences the one straightforward love of the play- for the improper and offensive Sir Toby. 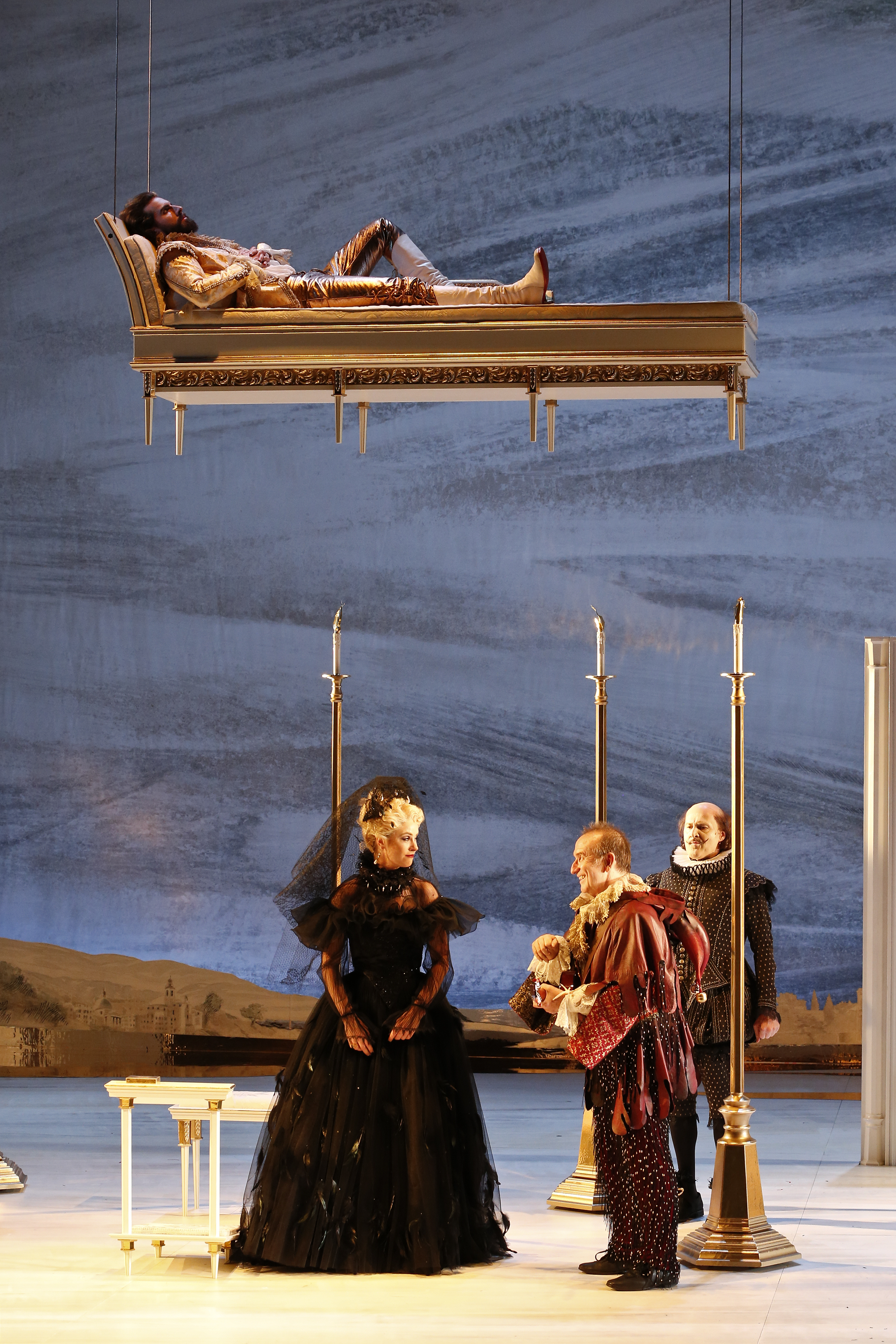 Tall and wily Russell Dykstra plays Malvolio who aspires above his station and imagines the Lady could love him. The play gives a telling insight into the fraught politics of religious and state persecution prevalent in England at this time, yet being performed in the Christmastide season, is presented through humour-as-revenge. Dykstra’s face is exquisite as malleable comic tool, with his body language a close second. He presents the joke he is led into with flair and has us laughing aloud at the stupid things he imagines in his very small mind. 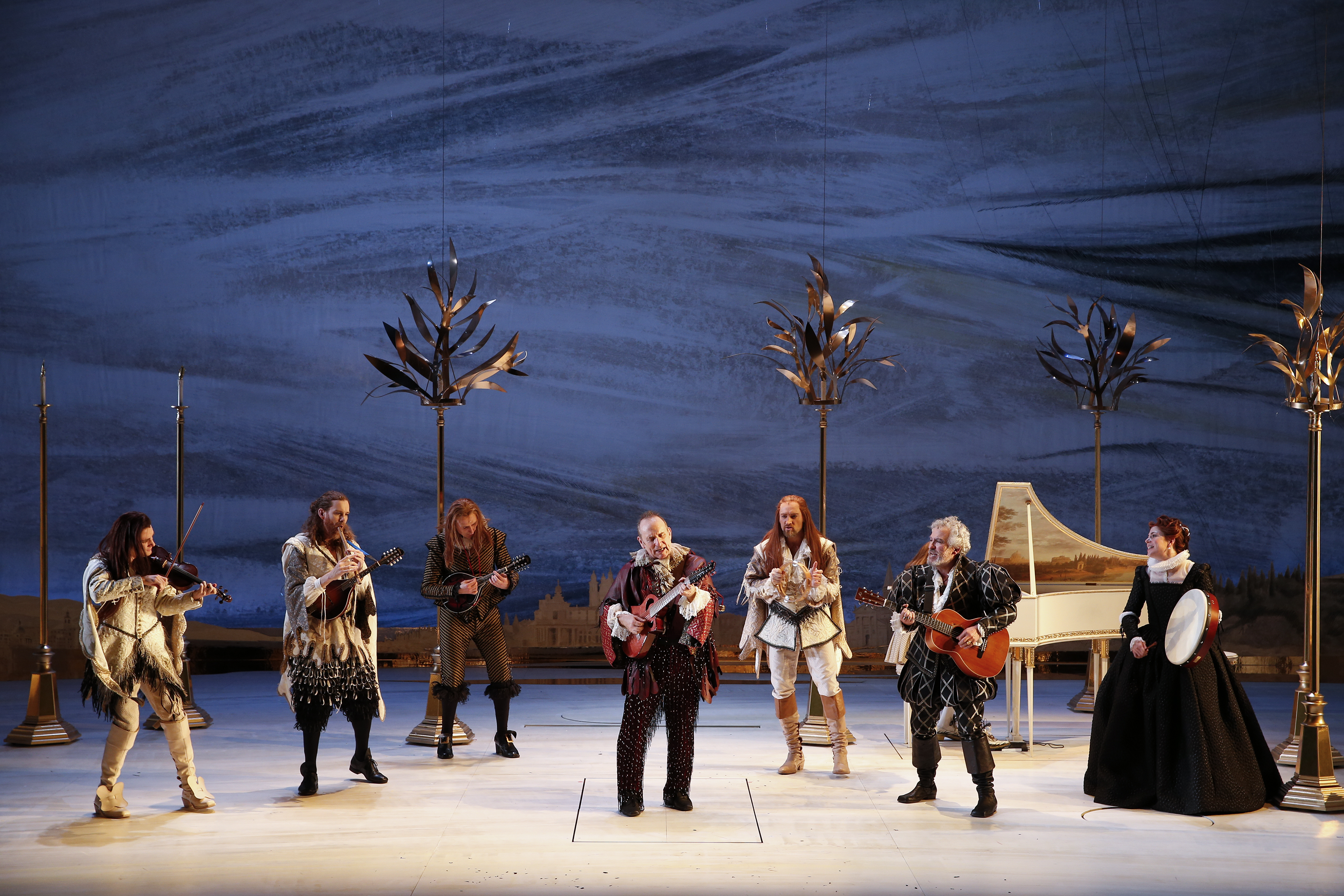 Gabriela Tylesova, of Australian Ballet fame, is the set designer and costumier and an essential ingredient to the show with her over the top, party-themed concoctions. In rich pink and gold, it resembles a decadent Baroque painting or glossy magazine version of a dark reality, with fine couches, aerial lifts, brocades, candlebras, frills and feathers, and is a superb addition to this entire suite, which is antipodean excellence-does-Shakespeare. Tylesova’s strong presence as a world class creative force is writ all across the production.

Do not miss this night of gaiety, light entertainment, cross purposes, and love. Their lives exist in a world not unlike our own and all works out in the end. A great end of year celebratory event.

Horsing around at Equitana