In my daydreams, I see two song and dance guys tail me, singing and tapping, regaling me with the stories of the greats- especially backstage high-(and low) lights, meanwhile singing along to a live musical rendition of hits such as Fly Me To The Moon, Delovely, Blue Skies, Pennies From Heaven, Hello Dolly, Mr Bojangles, True Love, That’s Entertainment, Be A Clown, Singin’ In The Rain, and …I woke up at The Loft and there before my eyes was my fantasy brought to life.

Take a trip down musical memory lane as two world class raconteurs tap and sing their way through a history of the great 20th century stage anthems in JTM Productions’ Just A Couple Of Song And Dance Men. Backed by strong jazz trio led by Musical Director Shanon D Whitelock on a gleaming grand piano, Conrad Tracey on fly drums, with Glen Davidson bringing the weight on Double Bass, I could not have invented a better combo to land me in 7th Heaven. With compositions by Cole Porter, Irving Berlin, George Gershwin and their like, the song list is solid gold. 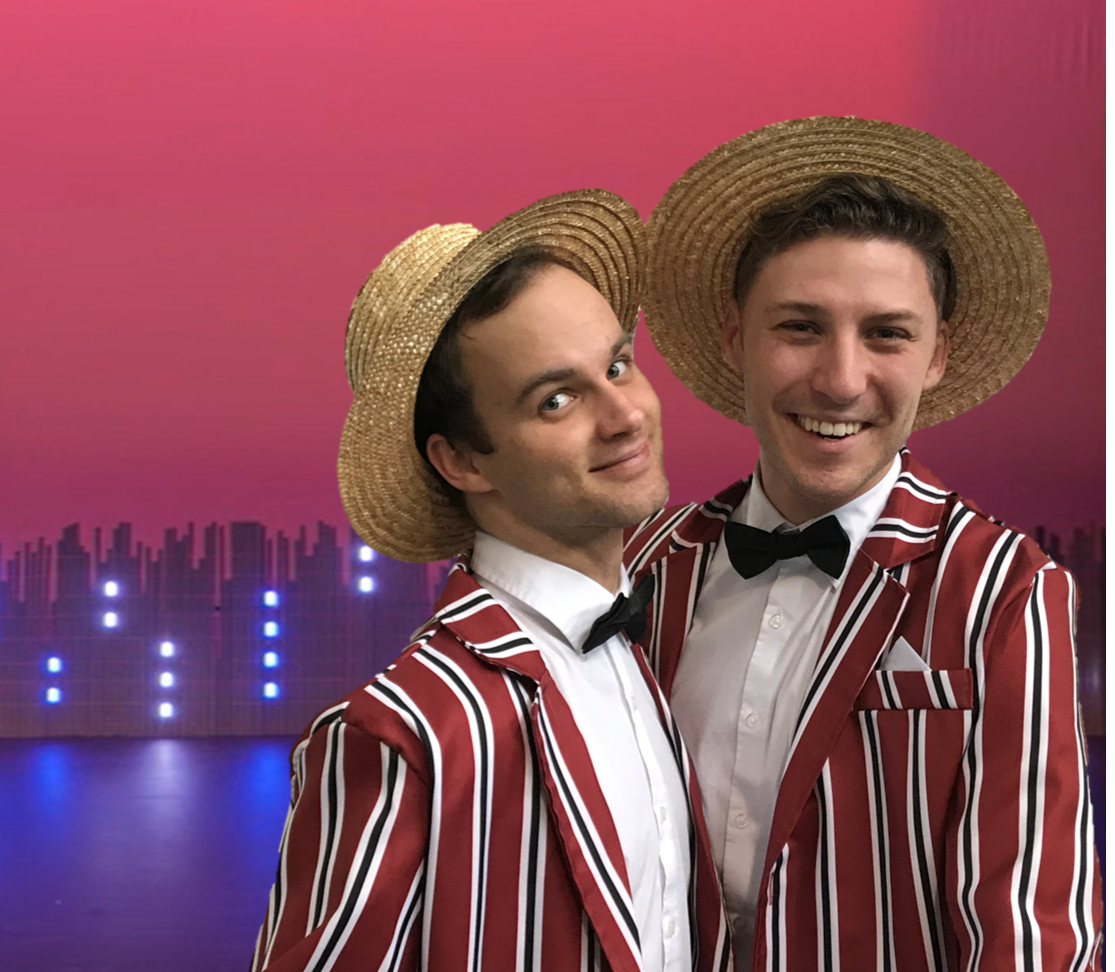 This show is the ultimate, intimate way to revisit the songs and stories of famous Hollywood, stage and screen, vaudeville, West End and Broadway musical stars from the past. Think Bing Crosby, Gene Kelly, Fred Astaire, Sammy Davis Junior, Donald O’Connor, Frank Sinatra, Jerry Lewis and Dean Martin. It’s a show you won’t want to miss with fabulous tales, fabulous artists, superlative writing and musicianship, great tapping, humour, cheek, bravado and best of all, the ultimate entertainment package that salutes great artistes. You get context, history, chronology, film stories, famous tales of rejection, famous couplings, famous dance routines and scenes – all seamlessly tied up with singing and dance moves to bring it all to life for you.

The two guys up front are polished performers and just fresh off the National Tour of The Wizard of Oz. Ballet-trained, tight tappers, aerialist and theatre skilled at NIDA, VCA and WAAPA, Shay Debney and Mikey Halcrow sport the manner of the guys they sing about as readily as slipping on their range of evening jackets- they ooze the smooze, walk the walk, and sing and dance the talk – in tandem! Jeremy Hinman’s choreography is jawdroppingly attuned – sensitive, complex, delicate, detailed – it showcases aspects of these great performers, whilst underlining the lyrics and music, yet not overshadowing. His foot artistry shines again, as well as tying two performers together as if vines entwined – it’s artful and pleasing to the eye, and underscores the dynamism of Debney and Halcrow as performing duo themselves. 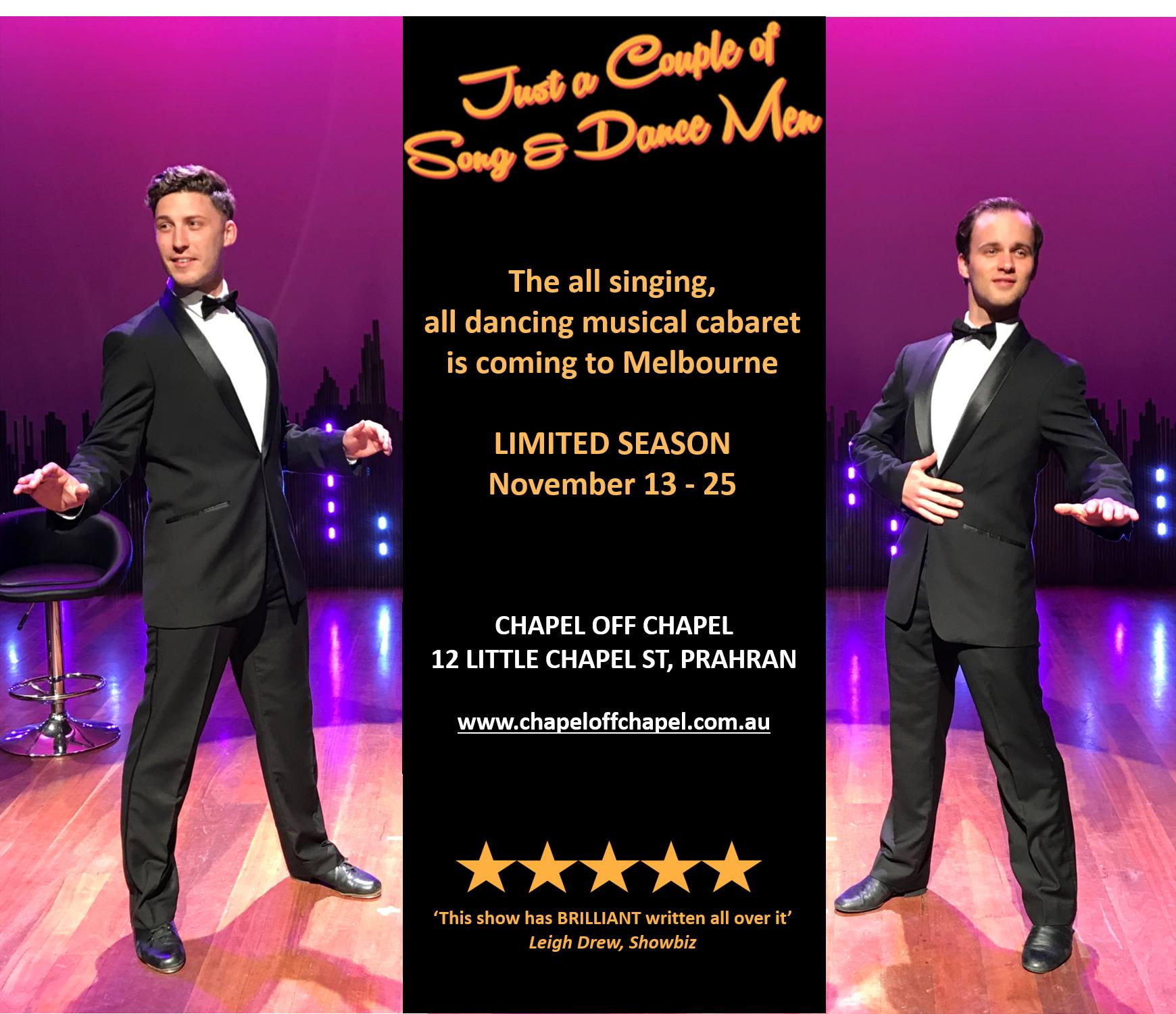 You’ll be seduced by these masterful Romeos. With distinctive, and varied, voices, their performance was perfect- not a note or timing falter, they are tuned tightly to each other’s delivery which often includes dance routines, banter, oratory, tap duets, slapstick, in quick succession. Such quality performers make it seem effortless yet its sweaty work. Their effort is our reward and the audience lapped it up, signing along, swaying arms, and joining in with the big numbers. For their efforts, the entire team was given a standing ovation by the crowd.

Backlit against an electric New York skyline, Christina Logan- Bell’s costumes are the era – black, and white, evening jackets with black bow ties, pin-striped coats with straw boater hats, the black boots and tap shoes of the shuffler, pressed white shirts and slicked back hair, and the inimitable black shoes of the stage act. 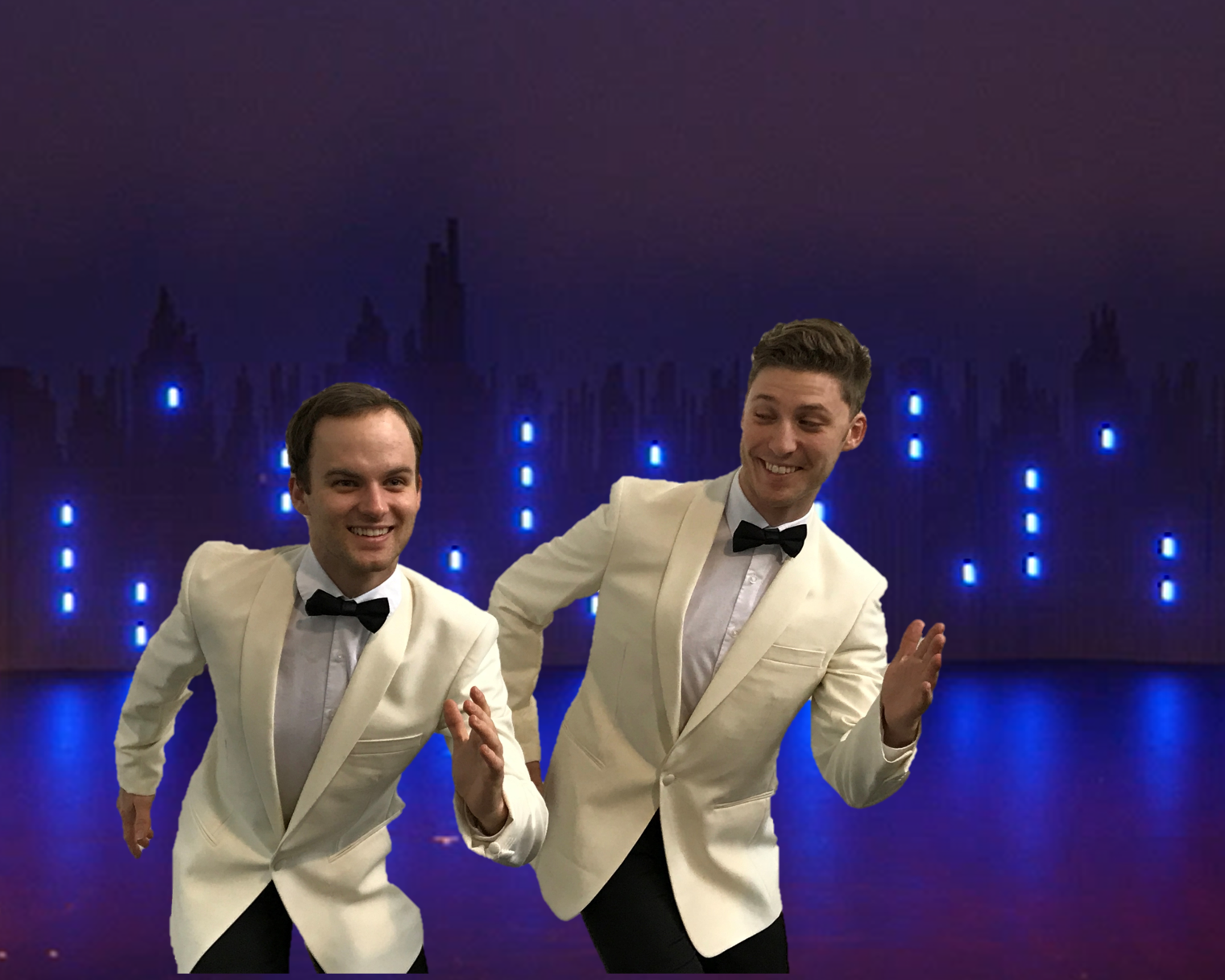 Executive Producer, and writer, Margaret Fisk AM, deserves her own round of applause. Past shows include A Fine Romance-The Magic Of Fred Astaire, Practically Perfect- The Music Of Julie Andrews, Bugle Boys – A Salute To The Andrews Sisters, and California Dreaming- The Music Of The Mamas And The Papas, this lady and her team have a history of doing history well. Fisk allows the great works and artists of yesteryear to be revived and performed for us in the modern era, equally enabling musicians and contemporary era song and dance folk to sing the songs, learn the lines, and shuffle the steps to bring these magic jewels to life for us as if freshly minted. Her product is always exceptional- talent, sets, lighting, costume,  musicianship, presentation, and writing always top drawer and her latest work does not disappoint. Each work shows a dedication to timely preparation, often lacking in the bigger companies. This lady loves live musical theatre – and the quality acts tell the story…

Highlights for me included Candy Man, when the depth and shade offered by live musical accompaniment sent me out of this world and into musical reverie, and  Halcrow reenacting Fred Astaire’s Puttin’ On The Ritz, one of my favourite dance moments ever. This 5 Star show has many Wow! moments- go along to sing along and find your own! Grab a glass of champers at the bar beforehand, and soak up the atmosphere of this fabulous venue which is the heart and soul of live cabaret and musical theatre in this country.

This season’s charity partner is the To Be Loved Network, supporting children exposed to family breakdown. Donations can be made post-show.

Keep up to date with future JTM Productions here which includes Barnum at The Comedy Theatre from the 27 April 2019.

Disclosure: The Plus Ones were guests of JTM Productions.