Just sit right back and you’ll hear a tale…who could mistake those opening words and sounds of the theme song of that 1964-67  TV show you watched after school, laughing at the exploits of a bunch of first world fools marooned on a small island in the Pacific Ocean? The Captain welcomed us into a tropical stage set, with an SS Minnow lifebuoy fixed aloft as reminder of their recent perilous past.

In this co-production between television production house Humdrum Comedy and theatre company Left Bauer Productions, with Gilligan’s Island:The Musical, you get the lot! Top quality stage smarts, goofy humour, a retro good vibe flashback, live band accompaniment, witty lyrics and an all over rollicking good feel, this team’s sole premise is to entertain and in this they uncover ample treasure on stage. A combination of well choreographed and rehearsed routines, excellent songs, a knockout cast, and a contagious enthusiasm has you singing along, not wanting to leave.

You will love every minute of recalling these nutty characters. It’s such fun – you’ll get jawlock you’ll laugh so hard. 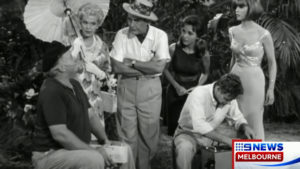 The team that produced this show are experts at theatre and comedy and it shows. The sets are wickedly playful and tongue-in-cheek and the costumes play to the comedy aspects of role and setting. The cast animatedly turn up the volume on their kooky characters, supported by a fresh sounding live band, with cartoon-like facial expressions and animated gestures that make you feel like you are watching the nutty TV original!

There are no flat moments and the night we attended, the understudy swing from Tasmania stepped up with aplomb into the main role. His dancing and movement flourishes delineated the consummate dag that is Gilligan and his singing was a beauty to hear. Also his dance routines.

The cast envelope you into an experience, it’s very interactive. They run into the audience, greet you as you arrive, caress and offer handshakes. They work as stellar ensemble, sharing the spotlight and energising on group anthems. Songs such as Shipwrecked, Hieroglyphics, Bring On The Little Green Men, and The Professor’s Lament are hilariously funny, strong tunes, and there is not a weak link in this song list, a credit to series creator Sherwood Schwartz and co-maker of this musical in the early 1990s with son Lloyd and daughter and son-in-law,  Hope and Laurence Juber. The singing is stunning with moments you feel mesmeried by the touchingly emotive high notes each hits, despite the overall antic tone. 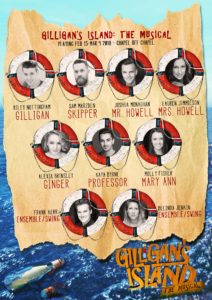 Every actor on stage was creatively alive, always telling a story and ham moments with the whole bunch on stage were very funny. Each evoked their character with flourish and flair and the audience gets to relish the silly idiosyncracies of all:

Goofy Gilligan with his daggy denim flares and cotton sports hat. Sexpot Ginger in her leopard prints, nightclub hostess hairdos, simpering postures and interrupting script recitations. Country girl Mary Ann in check print shirts, long ponytails, short shorts, and feminine whiles fascinate while wealthy Thurston and his teddy bear, with wife Lovey, reveal toxic anxiety about sudden stock falls and tax evasion. The steady head Captain is needed amongst all these neurotic types and as funny as Alan Hale Jnr. from the TV series. Add to this the Mr Know It All Professor, with an operatic voice, who holds as many degrees as graduates today yet has difficulty getting 7 people off the island.  Here is a recipe for a hit show! 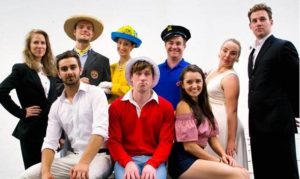 There is lots of talent on stage here. You witness the quality theatre talent Australia has on offer, performers of note who will go onto big success. Ginger (Kiwi Alexia Brinsley) is a scene stealer and amazes with her body contortion, voice, and ability to pull focus. Mary Ann‘s (Molly Fisher) voice evoked the great female roles of Eponene or Grizabella. The Captain’s (Sam Marzden) rich vocal tones betrayed a quality baritone, and The Professor (Kaya Byrne) hit high notes not expected of a man with his head so often at a microscope. Joshua Monaghan fully embraces the stuck up rich old man, Thurston, and has a perfect partner in bourgeois crime in the elegant, vocal master Lauren Jimmieson. 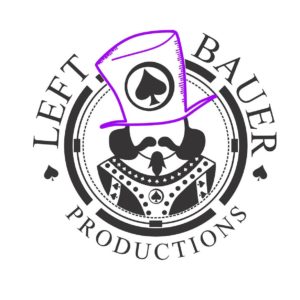 For a madcap spoof, there are many themes bitingly current here-  environmental devastation, economic collapse, lost tribes, community action, knowledge vs instinct- and it will have you musing on missed Survivor episodes. Watch for a visitor from another planet who resembles a funny guy who is a world leader. The premise of this highly successful concept show makes fools of all we hold high about our civilisation and has an intelligent aftertaste.

If you love singalongs, a trip down memory lane, non-stop comedy, song, and dance, catch this limited run, Melbourne only, for a night of total revelry, fun, and performance excellence. We are so lucky they got washed up in our town. I loved this show so much, I’m going back! Think I wanna get shipwrecked.

In the words of dumb seer Gilligan: That is all. 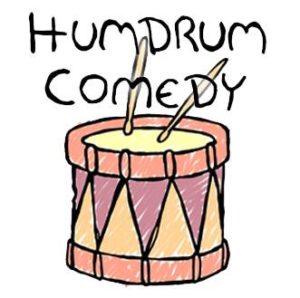 Disclosure: The Plus Ones were guests of Left Bauer Productions and Humdrum Comedy.

Getting Lucky at Rice Paper Sister