I’m Huckleberry Finn, I go adventurin’… and so will you as you enjoy a warm, balmy evening riverside in Huckleberry- A Musical Adventure presented by Olentangy Music with book, music and lyrics by Chris Wallace at Chapel Off Chapel. A trip back to the old times on the Mississippi river are vividly brought to life with original songs in a new stage show from a team of theatre professionals. It’s a heartwarming storyline with songs just right for the parts, and you are also introduced to the interesting life of the author. So genuine, it’s a production he himself would have given his stamp of approval! This is musical storytelling at its best.

With all the ingredients for a stage success, I can see it traveling with its clever, well trained cast, a honed, humorous script, factual truth, original compositions you can’t stop singing, and a gorgeous set that takes us back to the childhood of Twain himself, revisited 22 years later as he writes a companion work, deemed the first great American novel(1885), to his 1876 Tom Sawyer novel. With references to frogs, catfish, cornbread, log rafts, wood cabins, stick whittling, witchcraft, slavery, and commentary on the life of the itinerant poor, the script misses nothing in its authentic stage translation.

Irascible, outspoken, and impassioned, Twain was a man of his times. A jack of many trades, he fought in the Civil War, was an abolitionist, pro-union anti-vivisectionist, and raconteur with friends in high and low places. His life was a rich one with much action – he was not an armchair philosopher and Wallace dedicates his depiction to bringing this wild-hearted spirit into the room.

Writer Wallace narrates the action as Mark Twain himself, a moniker or pen name referring to safe waters, two fathoms deep being the mark indicating clear passage for a boat, touring the world in 1895 and newly arrived down under. Appearing every bit as madcap as the famed images of an elderly Twain in his daguerreotype 19th century pics, Wallace’s attire, demeanour, voice and presence eloquently reveals to us the great humour in this man of many interests.

A lifelong thinker, Twain was born to a comfortable family yet left school early, age 11, and entered a river profession for the early part of his life – his greatest aim to become a steamboat pilot, steering water vessels down the complex and dangerous Mississippi river, something he apprenticed in. He also worked as a type setter, unsuccessful miner, and fledgling journalist, and, later, as lecturer, humourist, and writer.

This rollicking yarn is brought magically to life in a simple and unaffected style, recreating an entire world. Adrienne Chisholm’s realistic sets evoking the rough hewn timber objects these river people lived on in homespun costumes of cotton and linen, combined with authentic voicework, accent, and characterisation serving to bring to life for us the lives of Huck Finn and escapee slave Jim. The recorded music evokes the rural idyll with banjo and fiddling at the margins. All the occurs centrestage, with Twain looking on, and interrupted by, his fictional children.

Two females play the pre-pubescent tricksters Huck Finn with occasional sidekick Tom Sawyer, who can string a line in fancy enough to get them both in trouble. The real trouble of the fiction, though, are the life and travails of runaway slave Jim, who Huck befriends down river as he himself flees his abusive, alcoholic father. The rich and moving relationship between this two is rendered beautifully by both a delicate script and keen performance from Tess Branchflower as Finn and Sami Wleda’abzgi as a heartfelt Jim.

These two appear together on a sweet mock timber raft-cum-bed as universal friends who’d long known the other, laying out in the midnight air, or hatching plans over early morning breakfasts. Finn determines to rescue the abused ex-slave Jim, who wishes to be reunited with his slave wife and daughter. Simple dreams such as these are lifelong impossibilities in an era where bounty catchers could make money trading in lives, and Wallace’s script stays true to Twain’s politics in his version.

Sami Obama Weleda’abzgi as JimExcellent voice coaching from Leslie Cartwright brings us the delight of a southern accent and the joys of jocular early American colloquialism. Branchflower’s boyish voice and body language as a Finn to remember are a true delight and she throws herself into this role til she becomes him. Watching her performance is one of the delights of this work.

Weleda’abzgi’s Jim uses excellent voice, showing us the hues and tones of that early African American, without parody or impersonation. His presentation of Jim as a loving paternal figure – and friend- of the boy blooms as the show travels…til we see them inseparable. Two social rejects find completion in the care they offer each other, the poorest and most marginalised. 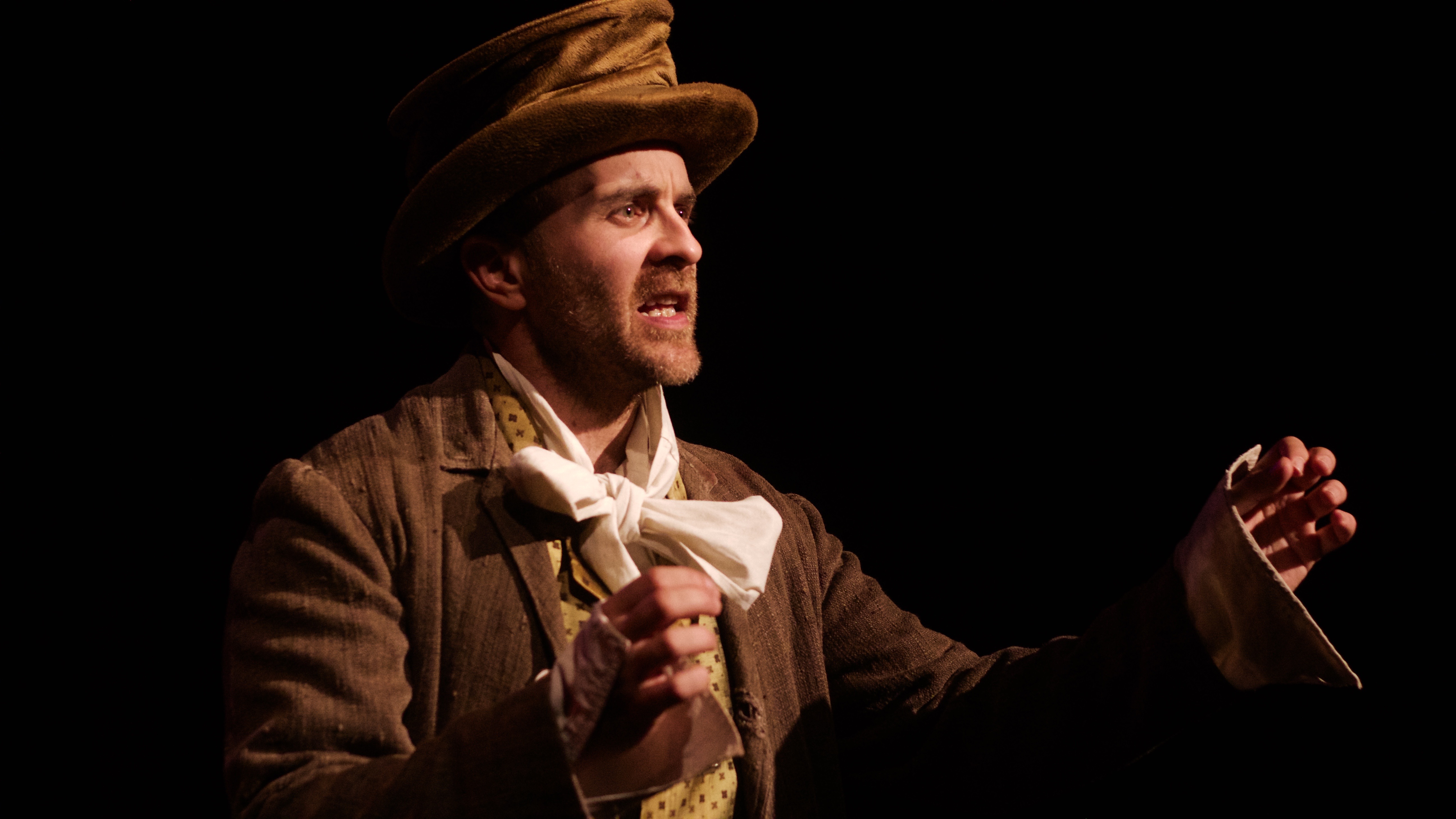 Other cast are quality, with Monty Burgess’ Duke of Bridge/Bilgewater’s hilarious Shakespearean medley of mixed up roles and lines delighting our audience. Tess Walsh’s Sawyer has brilliant boyish body language- you don’t mistake these actors as ‘females playing males’- as she flits in and out of Finn‘s adventures. I was reminded of schoolyard pranks and fun.

So much of this play honours the tone and setting of Twain’s work imbued with the egalitarian freedoms offered by life along and on the river, a pure and sacred space untroubled by the exigencies of human life that fret along its edges. It’s a democratic space where all rule-runaways follow freedom, as comrades, and offers a space of singular beauty which this entire production honours.

A storybook way to finish the year, see this show for a wistful venture downriver and into possibilities of the best of mankind, from another era, still affecting in our own.

Disclosure: The Plus Ones were guests of Olentangy Music.

Three films you must see at the Japanese Film Festival 2018