Powerhouse singer Justin Clausen and glittering pianist Jamie Burgess serve a sophisticated hour of passion, pain, the past, and other dramatic notes on a trip down memory lane reviving anthemic songs from pop’s best women in He’s Every Woman. You get pop greats, the broken-hearted love songs, separation songs, coming of age and power ballads, and other dramatic high-points through the great songwriters and composers of the 1960s to 2000s. It’s an hour which is hard to say what you’ll love best- the costumes, the banter, the song choices, the stories, the accompaniment, the feel-good moments, or Justin’s out-of-this-world sonic sophistry.

I was a Clausen newbie, having only just seen him, with Burgess, perform at the launch of the 19 June – 1 July  2018 Melbourne Cabaret Festival at Melbourne’s home of musical theatre, Stonnington’s Chapel Off Chapel. Wending his way through the audience to the stage with the grace and ease of a natural superstar, Clausen has the ability to hold everyone’s attention. You listen like you’ve never heard singing before. Justin’s voice simply stops you in your tracks. Hearing it, I knew, there was no turning back. In the presence of a world-class star in his peak artistic moment, I was a total convert. 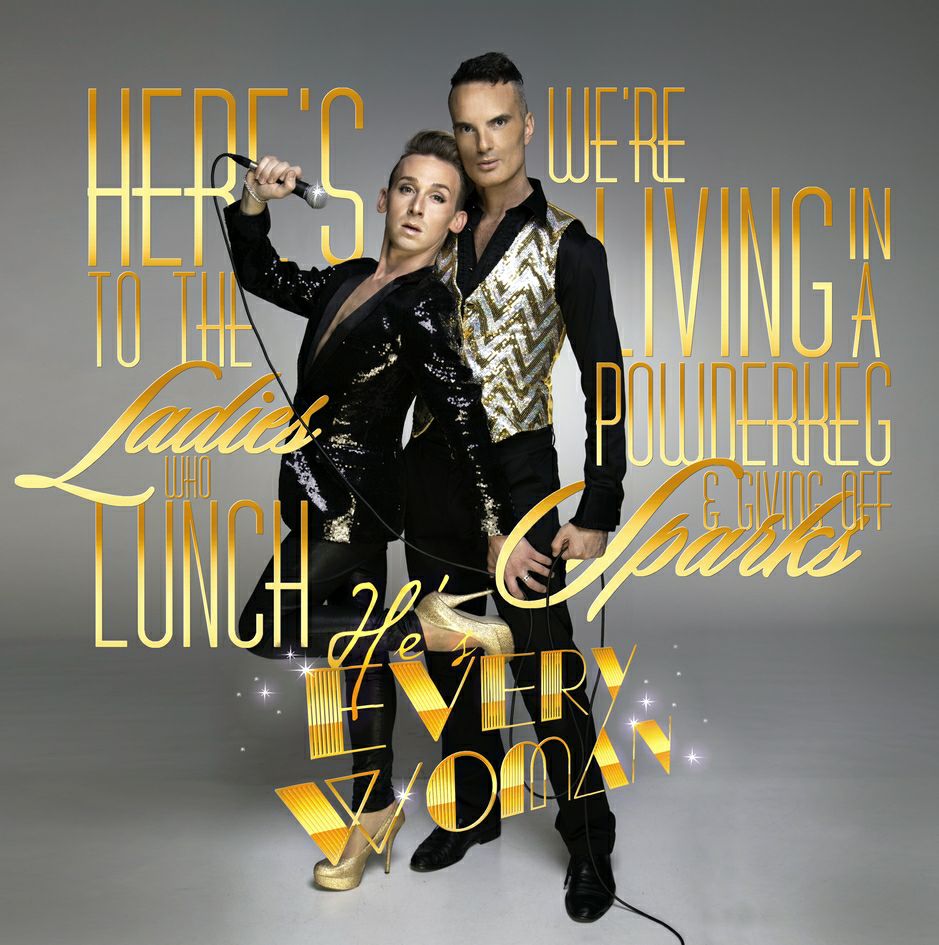 The show celebrates all things DIVA, with their multi-story hairdos and Goddess personas, and is a loving celebration. Clausen declares it’s his tribute to the women that helped him become the person he is. Seasoned performers Burgess and Clausen know a good show tune and allow us to get into those songs again through their virtual classical/rock-opera reworkings. It’s great to not just hear mere karaoke and Clausen allows his own sound to come through into the rendition. The setting is cabaret- small tables and seatings in an open, black-curtained space that centres the shimmering profile of the black piano and a stage space for Clausen to get his dazzle on. Clapping and singalongs are welcomed; there was even a flashlight sway.

Intimate settings like this show bring the mood and it’s retro pop done theatrically. Allow your inner chanteuse to escape as the show hypnotises for its 60 minutes, featuring songs from Tina Arena, Cher, Olivia Newton-John, Celine Dion, Liza Minnelli, Whitney Houston, Tina Turner and other wonderful women artists. Classic songs roll out one after the other such as It’s All Coming Back To Me Now, Wasn’t It Good, My Heart Will Go On, River Deep, Mountain High and I Know Him So Well. It’s non-stopo torch song greats that those with vocal knowhow thrill to hear performed live.

Witty banter and tales from their own lives or behind the curtains fill the spaces. They regale us with stories from their musical youth- the first cassette release of classic albums, singalongs, song faves, bedroom singing into your hairbrush, family shame, and their observational chitchat covers on the various eras and their cultural faux pas. The audience lapped it all up- the tears, the laughter, the spotlit moments, these diva’s highs and lows. This piece has good depth, revealing that life is like theatre, full of a range of shades. 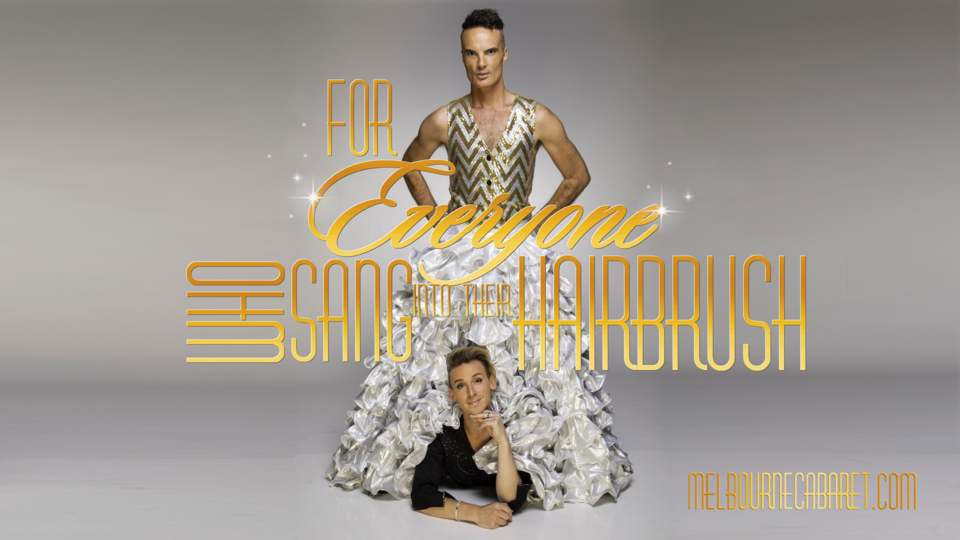 NY-trained, a regular Arts Centre and Hamer Hall performer, and Green Room nominee, Clausen is a 360 degree-star, poured into tight-fitting black pants, a black sequinned jacket and who enters in a silver frilled skirt like a mermaid’s tail I never wanted him to lose. Skyhigh glittering gold stilettos prove this guy has clicked his heels together and is living his dreams artistically and we are the happy recipients of total class in the voice department. Impeccably presented, his blonde hair do sets off a pair of sapphire-blue eyes which reach out into the crowd with imploring expression, showing emotion, joy, and charm. Clausen is very present during his show and the love he has for his artform shines through his face. After so much seeming skill on musical reality tv shows, it’s a real treat to hear two performers who have the goods as well as the quality only dedicated stage work can produce, and are a good reminder to audiences to get off their screens and into a theatre to see real artists deliver.

Justin’s equal stage partner is cabaret-attired, chirpily engaging Jamie Burgess. A longtime Impromptunes accompanist, he sings, talks, and plays piano as if it were wired direct through to his brain. He puts passion, emotion and connection into those keys and his beautiful aural tone and colour on the grand piano fills the room with notes in a way no speaker can. Accomplished, he has performed at multiple Melbourne International Comedy Festival seasons, in opera, street theatre and devises quality original works. 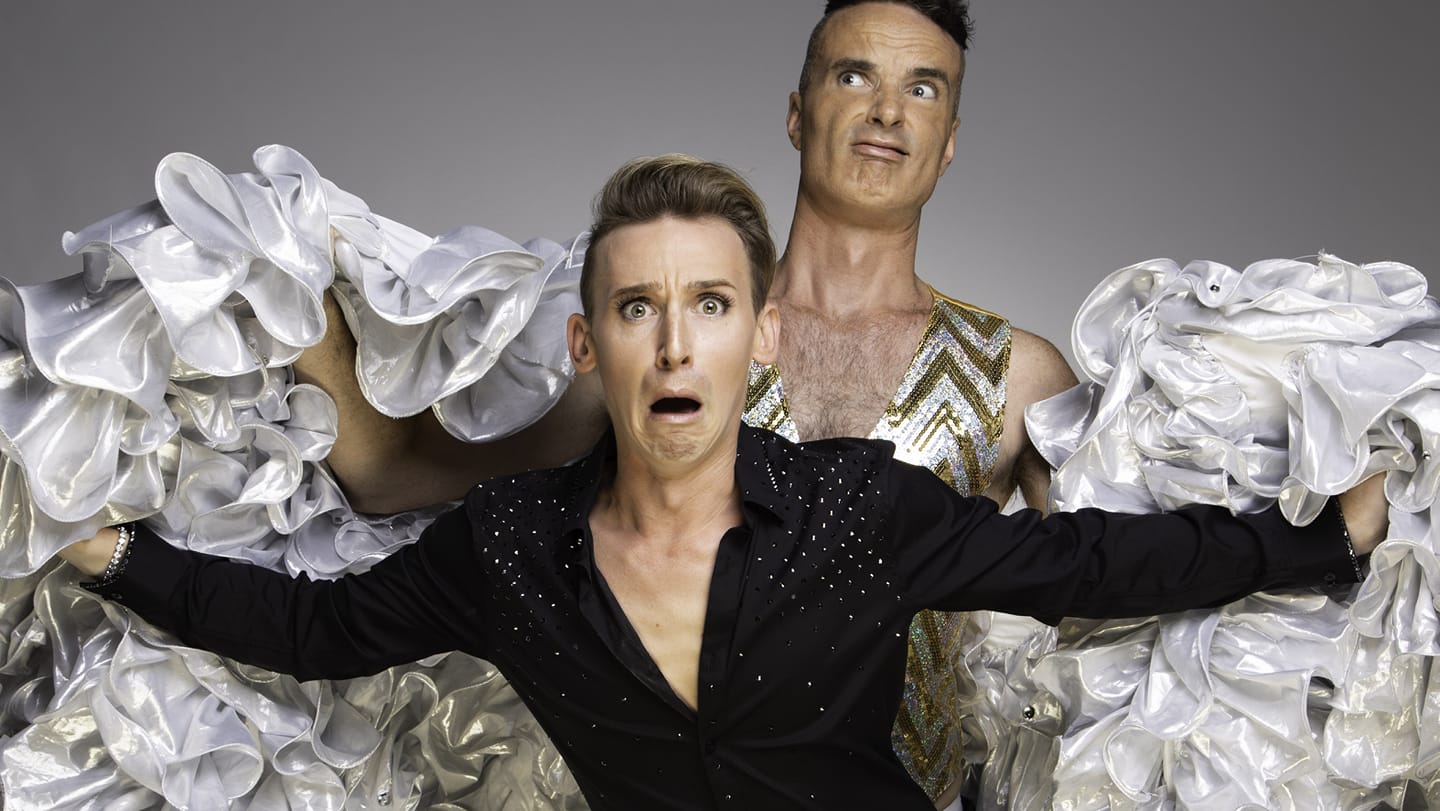 Clausen goes deep in a personal moment, speaking of his own loss and of bonds that mean so much to all of us. This touches those in the audience who have lost people we love, bringing a tear of remembrance. Memories aren’t the only thing that bring tears in this show, Clausen’s otherworldly vocal skill shoots you up into the heavens, flying high, gently evoking a flood of feelings. Like all good artists, his voice also flies low, and he takes us where deep emotion lives. He commands the stage, and calls up anything from deep inside himself with no false notes. Awestruck, we were astonished at such a unique native gift. It was an utter delight to see Justin, along with Jamie, totally in their element.

There’s plenty of humour, too. Watch for the late show appearance of cult pop songstress partial to black leotards, unbound hair, chains and leather. I won’t name her to spoil the surprise but it’s no news that Justin does top class impersonations.

This show would entertain anywhere in the world – Berlin, New York, London. They bring it to our hometown to warm our hearts in winter. You have 5 nights left to catch this fabulous hour in a darkened space. It takes you to places inside yourself. Dont miss out – book now and see if the call of the diva’s song steals your heart, too.

Get show updates here and keep up with the boys’ future fun at Justin and Jamie.

Disclosure: The Plus Ones were private guests.