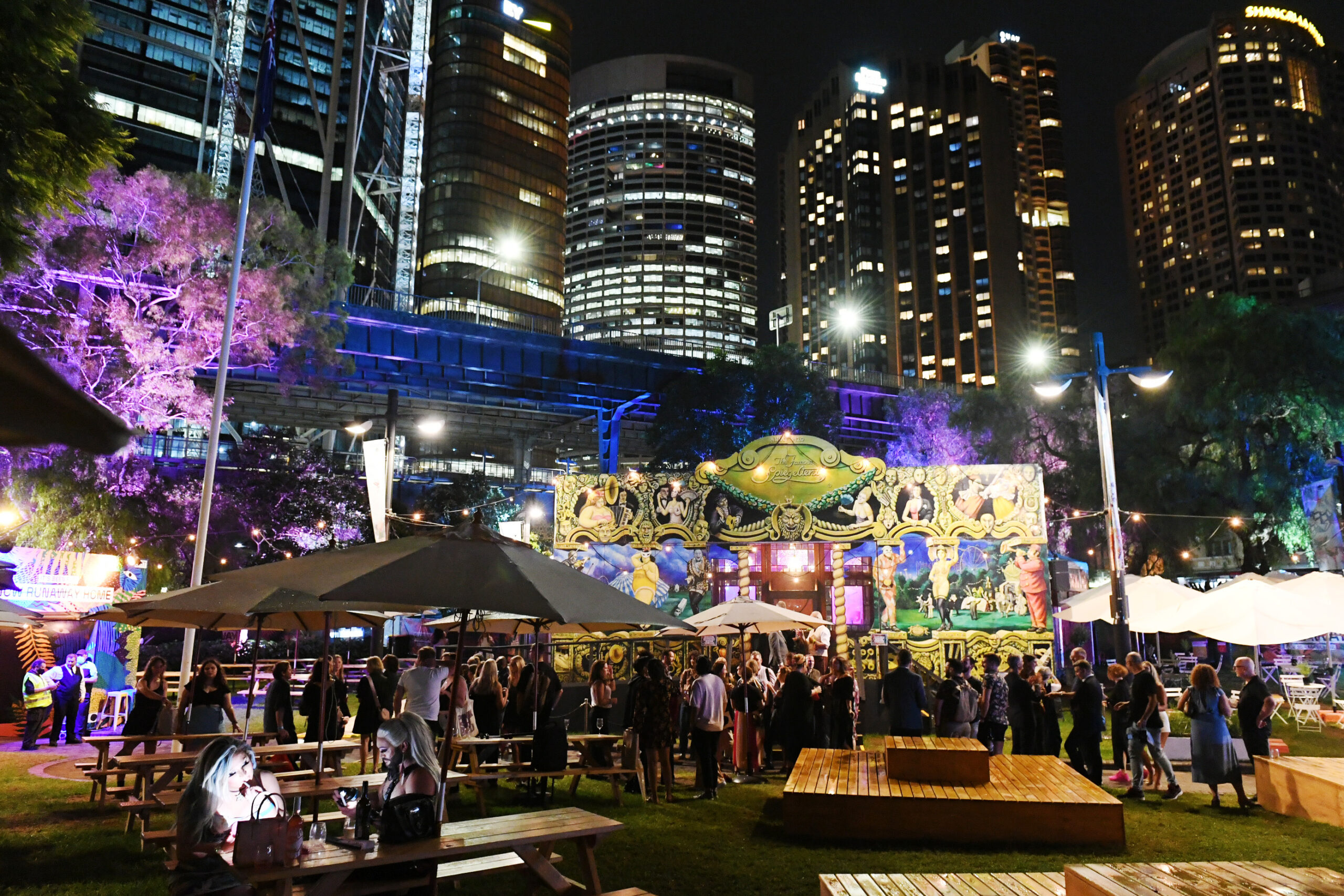 On a wet and windy night my plus one and I joined hundreds of other punters at First Fleet Park in The Rocks for a taste of exhilarating theatre, spectacle and comedy. We were here to witness a show unlike any other – Bernie Dieter’s Club Kabarett. If a hazy evening of wickedly funny kabarett, breathtaking circus, gender-bending aerial arts and fire-breathing sideshows at its most inappropriate, provocative and hilarious sounds like a good night then read on for what to expect. 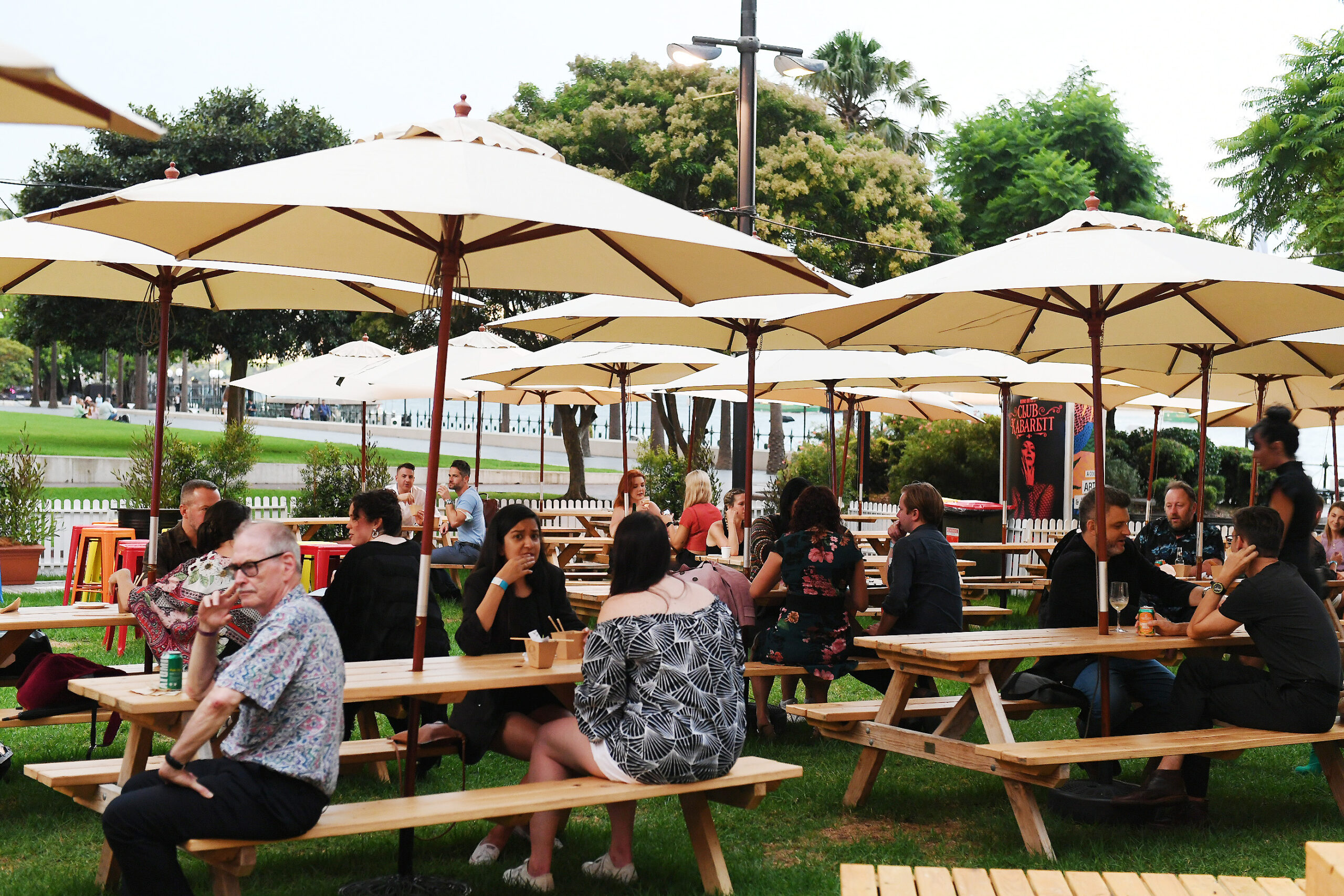 Complimenting the performance is a new popup food and drinks park next to the Famous Spiegeltent. Dubbed RUNAWAY Gardens, the area has multi-million dollar harbour views, plenty of open space, picnic tables to relax with friends and some delicious things to sip and eat before the show. It’s such a nice area that we are sure plenty of locals walking past would be happy to pop in for a catchup drink and watch the sun go down. 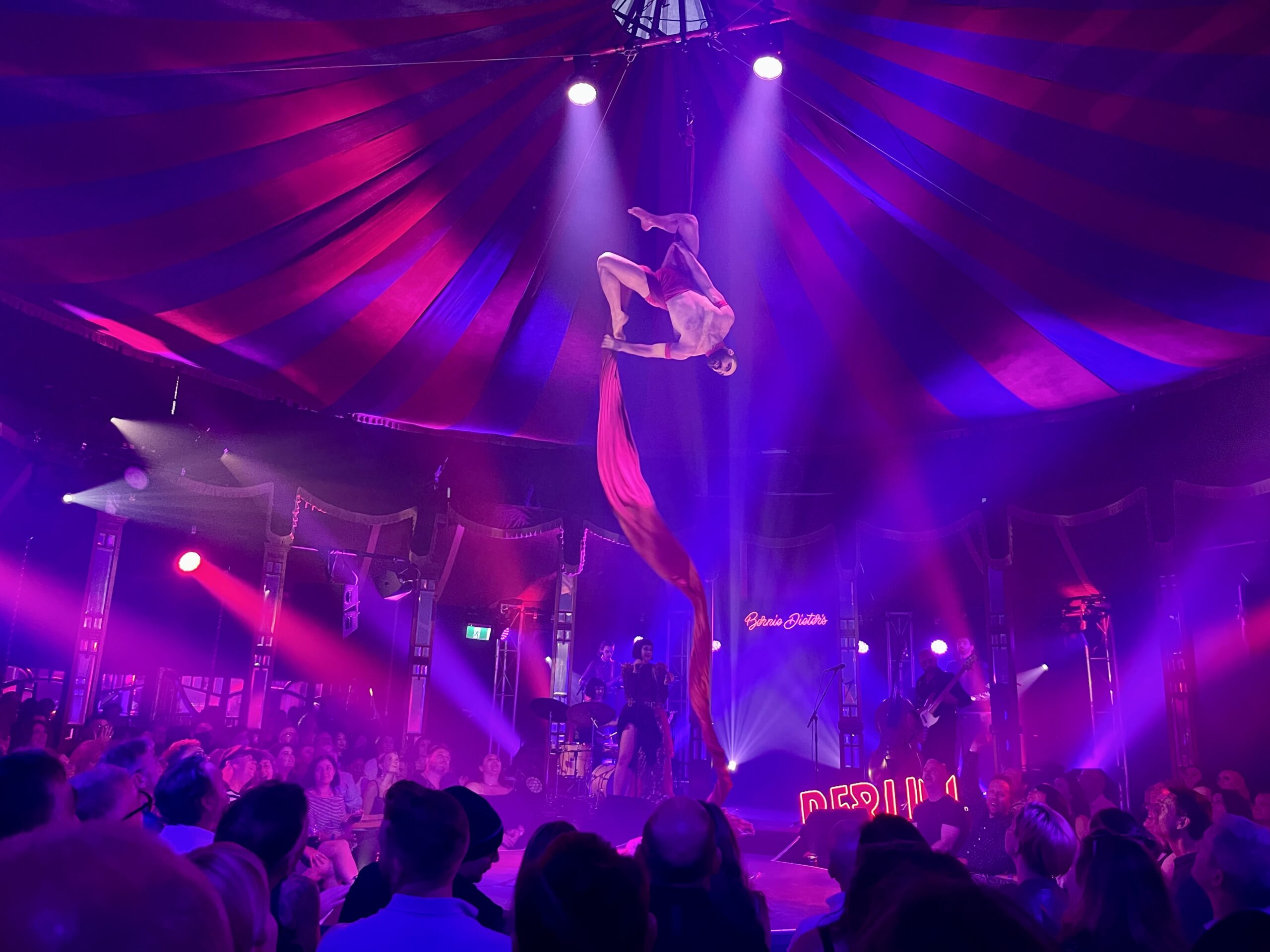 As a foodie, it was great to see that the curated bar list was all top tier Aussie producers; Atomic beer from Redfern, Hickson Road Gin (try their cocktails) and an old favourite of The Plus Ones, Hidden Sea Wines, who remove plastic from the ocean with the profits of every bottle sold. Tokyo-inspired neon food truck, Food Trap were also pumping out some tasty and nourishing poke bowls with spiced tofu or crispy chicken that we’d recommend saving some stomach space for. 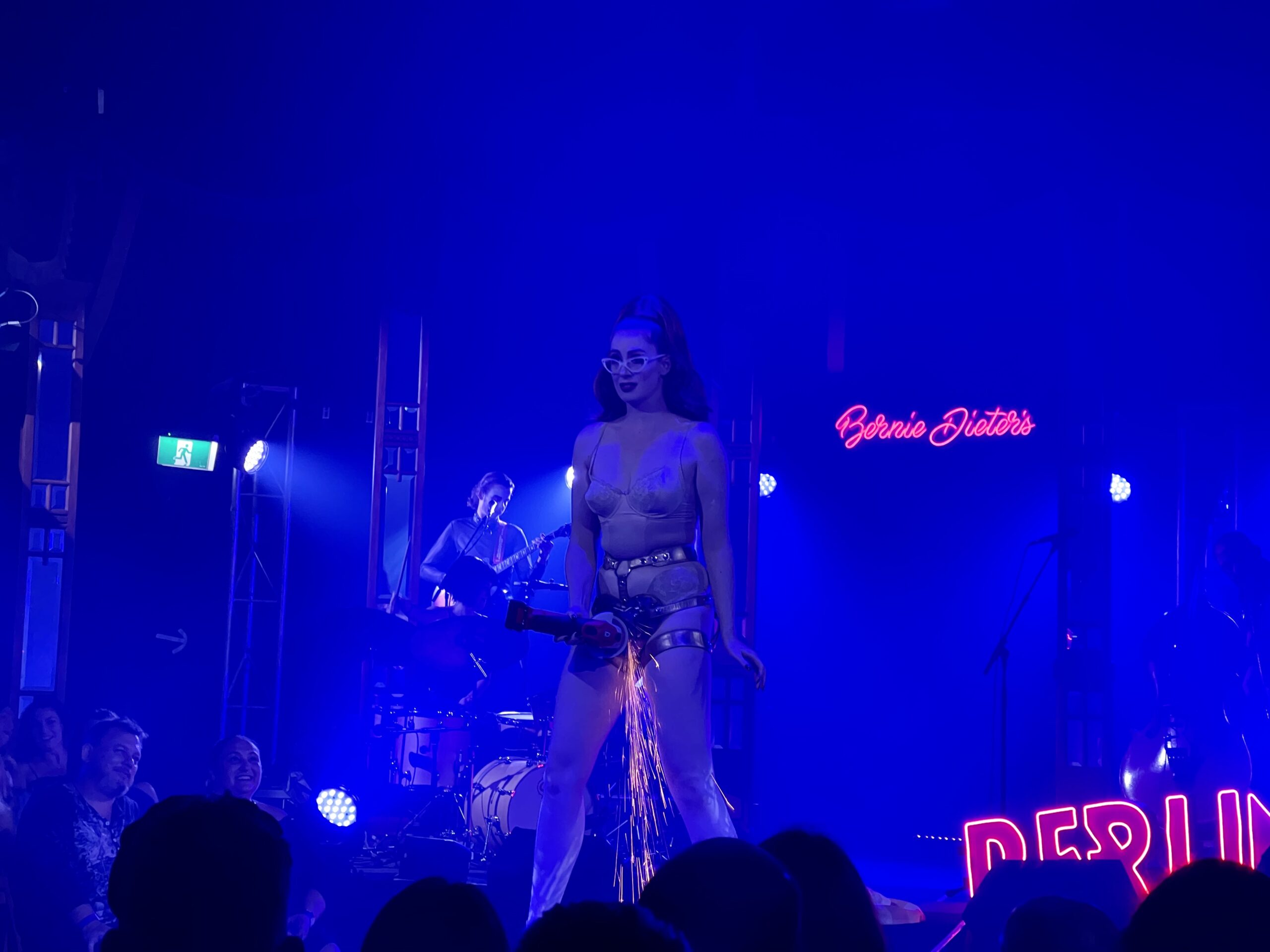 The magnificent Spiegeltent was the perfect location for a night of debauchery. If you have never been here before, picture a glorious old tent with a round stage in the centre of the room which the packed audience gathers around. There are no bad seats here. 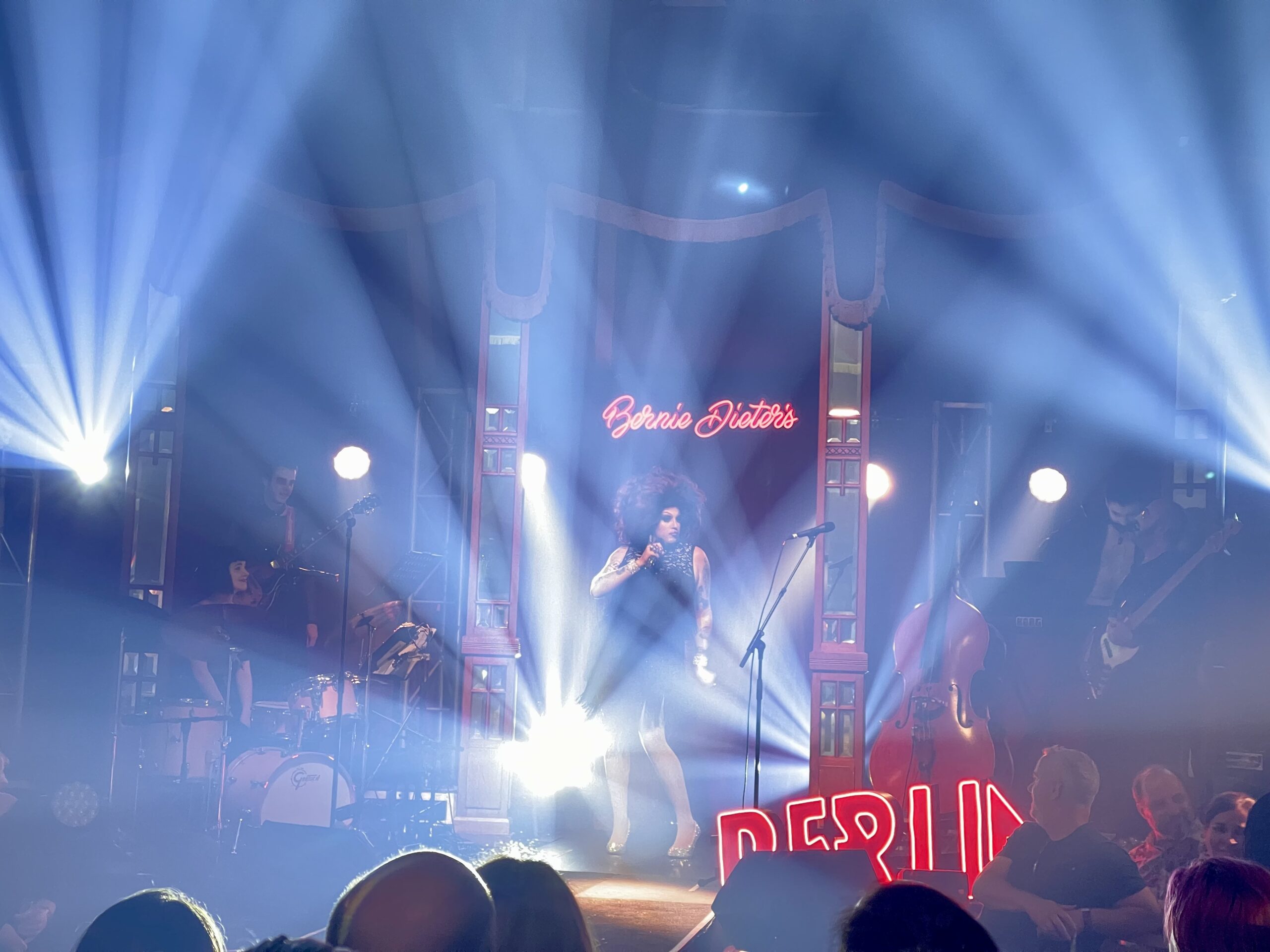 From the moment self-proclaimed Mistress of Mayhem and ring-master Bernie Dieter strode into the spotlight, she commanded our full attention. Throughout the night, Dieter was impossible to look away from. Besides being an excellent singer who accompanied the live band during each act, Dieter’s utterly hilarious and witty numbers were matched with excellent costume changes (her faux-fur nipple coat being a particular favourite). 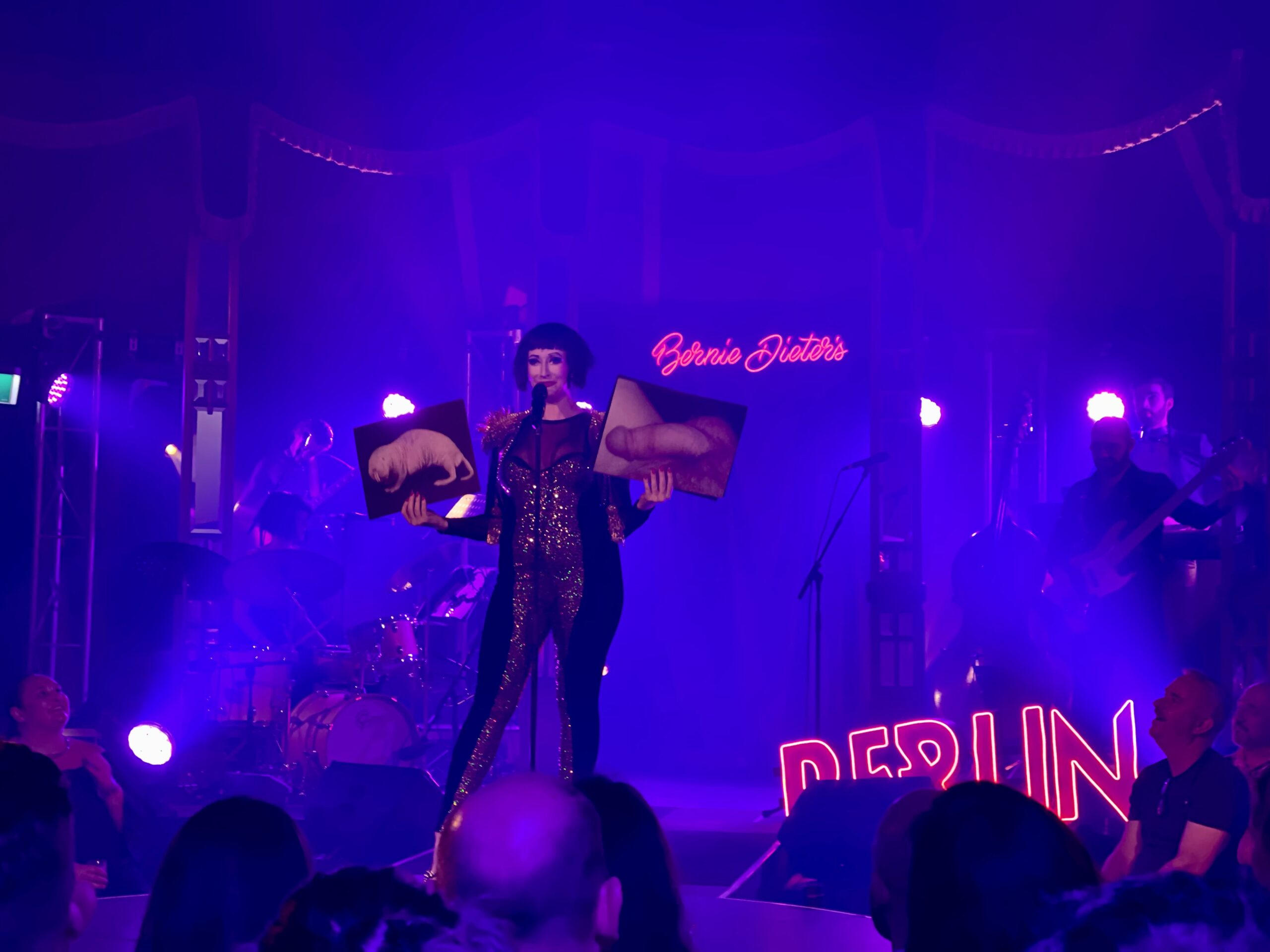 From fire breathing to gender bending aerial, Club Kabarett features the talents of celebrated performers from across the globe. Each performance was unique and wowed us in their own right. 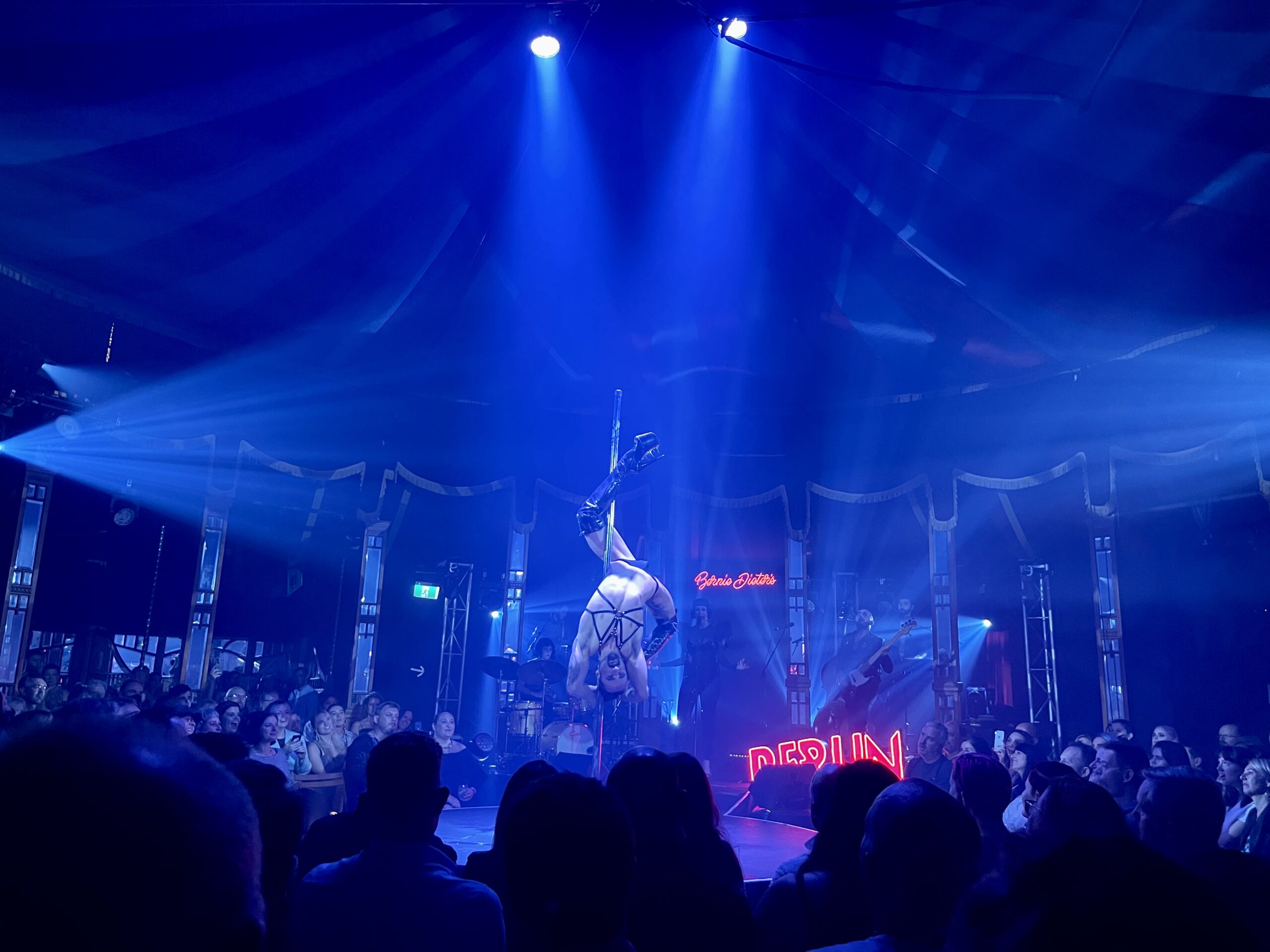 There was J’aiMime’s balloon strip-tease, Chris Talbot’s gender-bending pole acrobatics and human heatwave Jacqueline Furey lighting up our lives with her fire breathing show. The live band and Dieter’s vocals added an extra oomph to every performance. 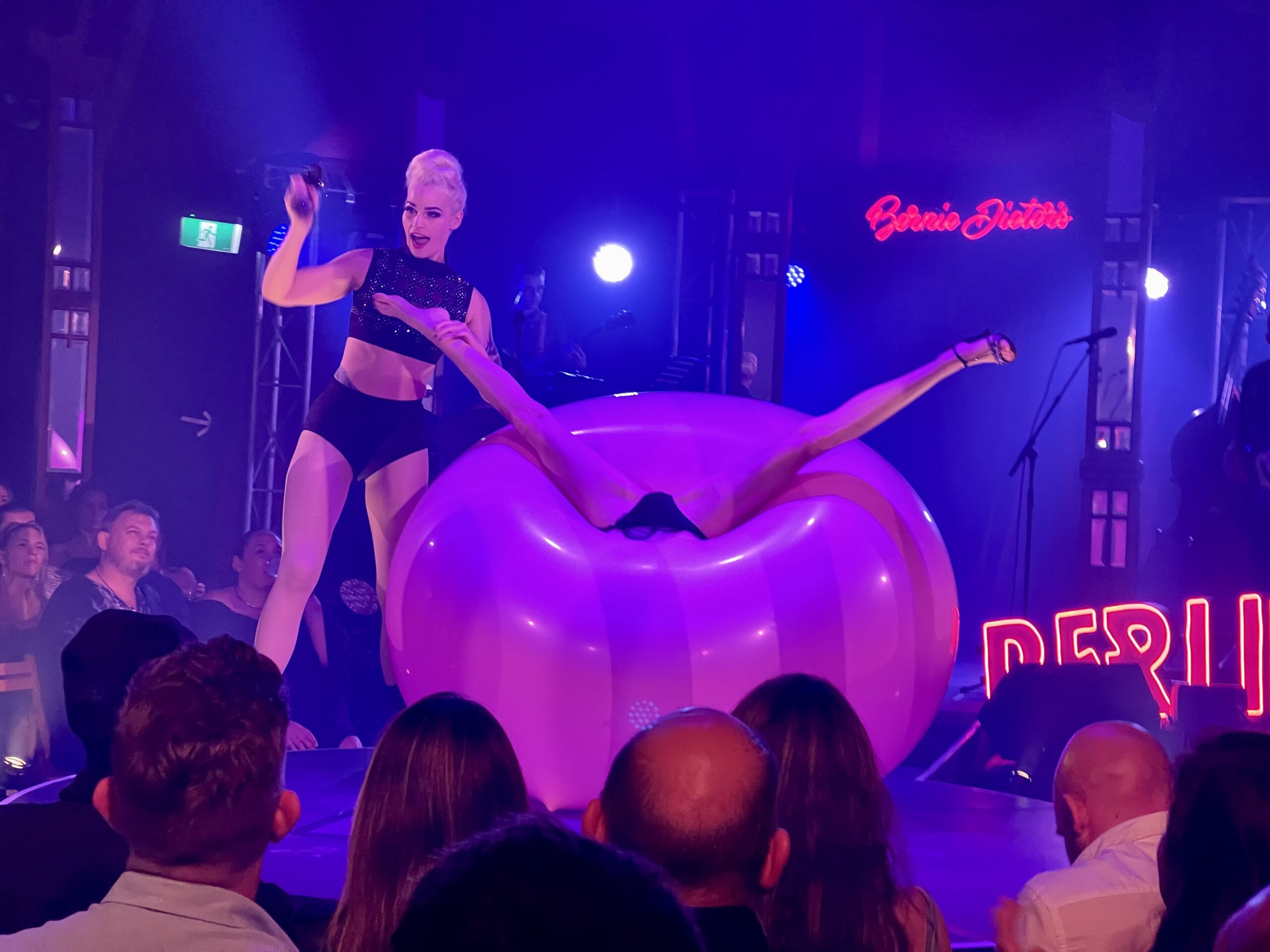 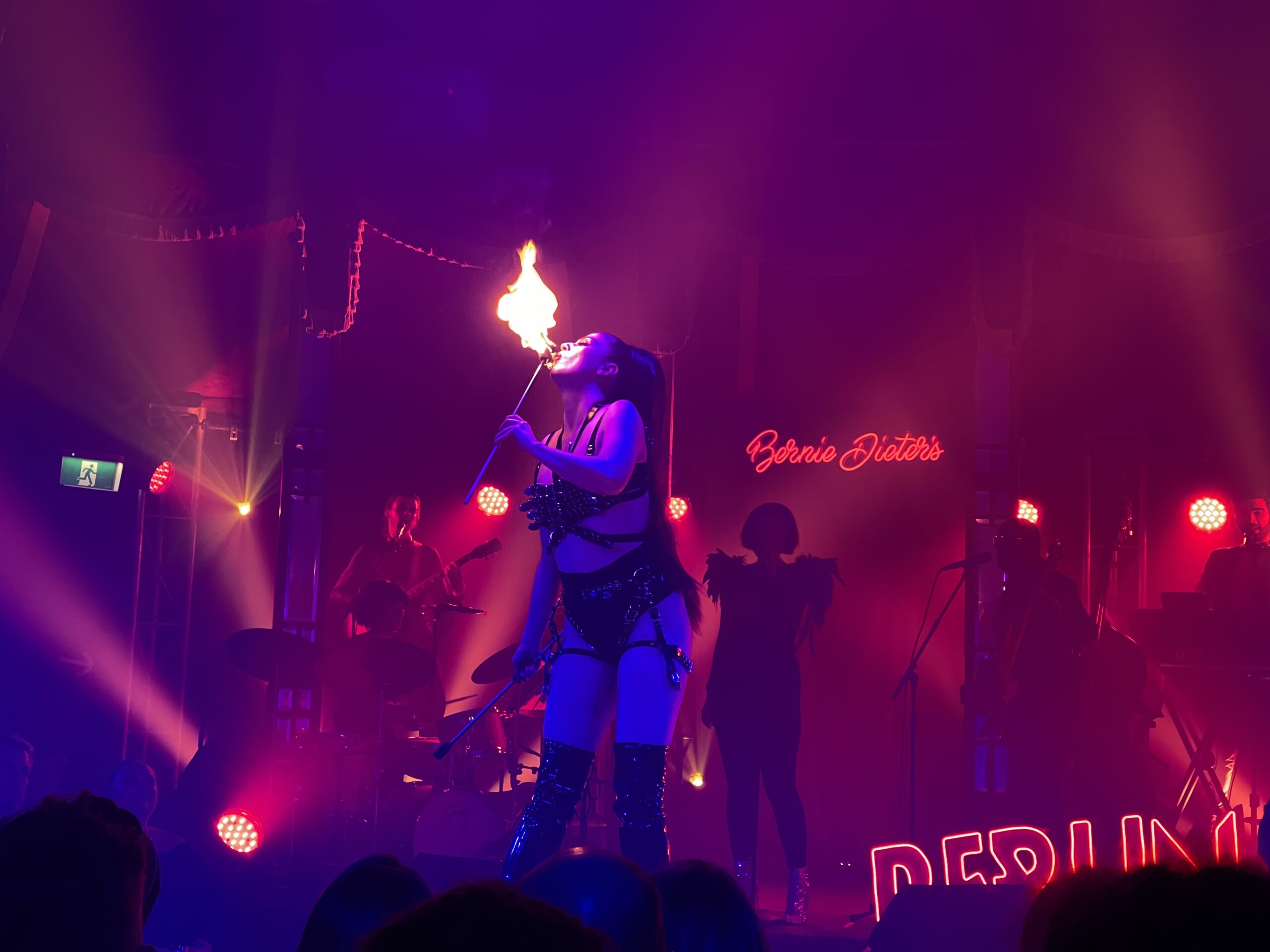 The special guest of the night Karen From Finance was very fitting considering the show was on during the iconic Sydney Gay and Lesbian Mardi Gras. Karen performed some classic high-energy hits that had the audience singing and clapping along. 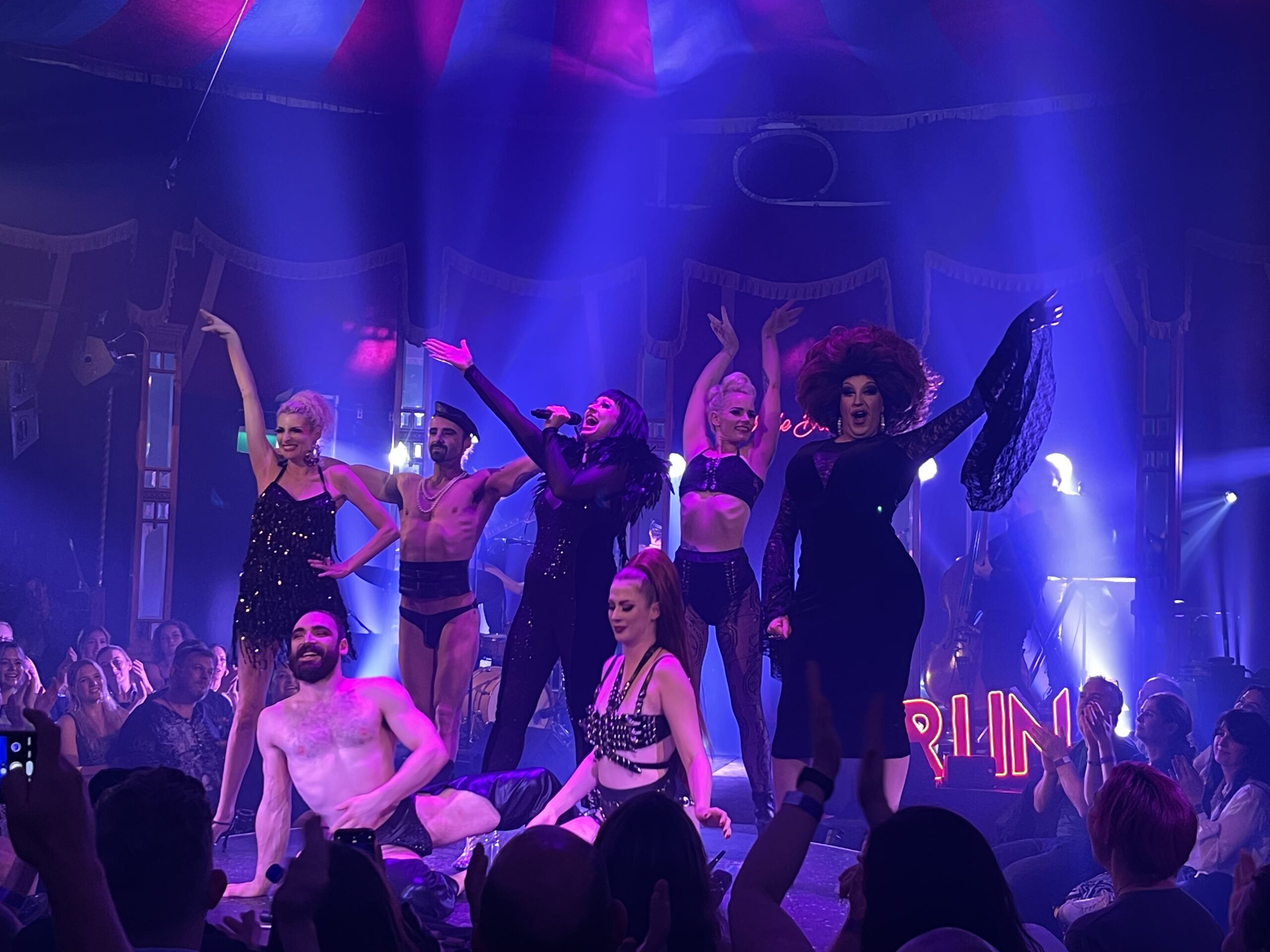 RUNAWAY Gardens is an oasis of entertainment, perfect for an after work drink, or a pre-show nibble. Open from 4-10pm Tuesday to Thursday, and 12 noon to 11pm (Friday and Saturday) and 10pm (Sunday) on weekends respectively, RUNAWAY Gardens is an amazing spot to spoil yourself with artisan drinks, food and a gazillionaires’ Sydney Harbour view.

The Plus Ones were invited guest of Original Spin.
Image credit: Tomas Zagoda and Belinda Rowland.