This Sunday March 6, the All About Women festival will take place at the Sydney Opera House. Now in it’s 4th year, the festival is a full day of talks and discussions about ideas that matter to women, providing a platform for a variety of voices to be heard. 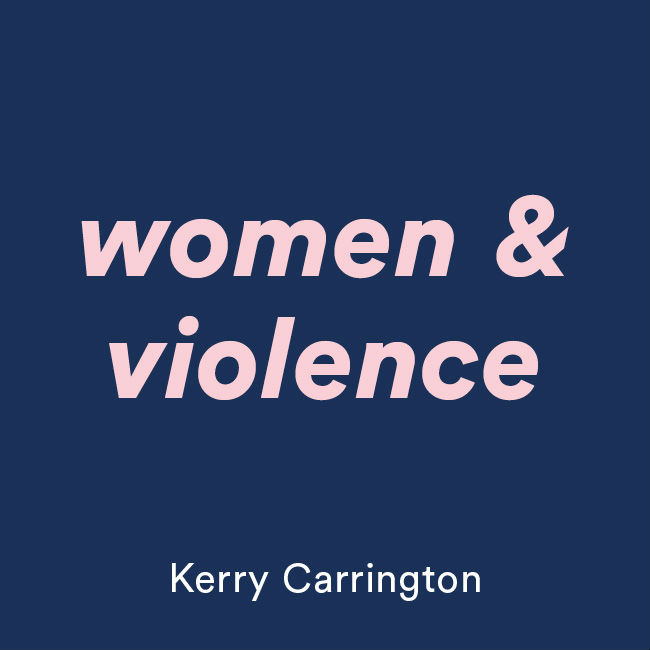 Recently, The Plus Ones sat down to talk with Professor Kerry Carrington — Head of the School of Justice at Queensland University of Technology — about the state of domestic violence in Australia, and what needs to be done to address the issue.

Could you start by telling us a bit about your academic career? You’ve done a lot of research focusing on family violence in rural context, and also more recently, on feminism?

I’ve been in this area for 26 years. My passion has been to research women’s experience of domestic violence. My first research was about a girl, Leigh Leigh, who was murdered in Newcastle in 1989, and I wrote a book about that. Then I got interested with the issue of ‘rape victimisation’. After that, I moved to looking at violence in rural and regional context and did a major study with colleagues on how that was experienced differently by white anglo women as opposed to Indigenous women. Most recently, I’ve been interested in how we can prevent violence against women, through huge scale but simple transformative change. In particular, I’ve been looking at how we police domestic violence taking a lot of inspiration from Argentina.

That’s really interesting. While this is obviously a gendered issue, what roles do other societal factors such as poverty and alcoholism play?

Domestic violence is not a homogenous crime: it is complex and diverse. What we do have are highly vulnerable populations. They are often groups that suffer from chronic alcoholism, or come from highly dysfunctional family environments with poverty and stress. So certainly those are important elements that contribute to domestic violence.
But it’s also important to recognise that family violence exists across all sectors of society. Women from a much more elite background could also be susceptible to domestic violence. The difference is that women who have the resources to escape a violent relationship tend to do so, but those who don’t have the resources are the ones in much higher risk of death, or serious harm, or their children being harmed. Background does matter very much in whether the victim can escape family violence.
We also know there are victims in transgender communities and those in same-sex relationships, but we don’t know how many. We need more research on this.

What are your views on how Australia is addressing the problem? It seems to me that much of our policy is focused on what happens after the domestic violence has occurred, as opposed to preventing it from occurring in the first place?

Most our approach to the problem is post-assault. So they are things like refuge accomodation, trauma counselling, apprehended violence orders, and access to courts. All these things are great and there is nothing wrong with them. The problem is they deal with the problem after the violence has occurred. None of them particularly embody a strong preventative potential and some deter women from reporting in the first place.

Preventative approaches are about what is going to drive cultural change. How are we going to change that now and into the future? Obviously that involves education, partnerships, and everyone taking responsibility. It involves men being part of the solution, it involves our community groups, sporting bodies, and  politicians. It is the normalisation of gendered violence and we need to turn that around. Unless we do that, we are not going to do anything to solve the problem.

You talk about education and I think that’s a key point to address. Perhaps young people often bundle up domestic violence with physical abuse, but really at the end of the day it’s about control, isn’t it?

Domestic violence revolves around coercion and control. It’s cyclical and its repetitive and that’s what makes it hard to escape. You need resources to escape, and those resources are linked to resilience, and they come from family or community groups. For example, if your local church is very strong that domestic violence is something god doesn’t want, then that has a preventative effect. Same thing for goes workplaces, schools, peer groups: that’s where preventative action needs to take place. But it also starts at the top.  That’s why emphasis on sportspeople and politicians are important. People with influence need to behave respectfully to women.

If you had a clean slate to tackle the problem, where would you start?

A good place to start is to adopt the UN Women’s Framework to Underpin Action to Prevent Violence Against Women. We would need a variety of action plans and action needs to be backed with money. Industry and business leaders need to come into it. Education also has a big role of play. We need to educate the next generation how to relate to each other and anti-violence needs to be taught from a young age.
We also need to rethink the way domestic violence is policed. Most victims in Australia do not get justice. The systemic problems include that most police stations are staffed by men and most sworn officers are men (around 80%). This is a systemic problem that makes disclosure of family violence difficult for women. We need to address this. My suggestion is that we look to Latin America and the women police stations that they have developed.
Disclosure is an important first step. That’s why you need to separate the disclosure and the response from the police. There are many practical reasons why women won’t report to the police. For example, they may commit some petty crime in order to get out of their abusive relationship, so when they go and disclose to the police they get put in jail. Or, it may be found out that they have a welfare overpayments or an outstanding warrant and they end up in jail. Who wants to have their child removed or be placed in prison? Over half of women in prisons are in jail are victims of family violence because they committed some petty crime.
It sounds outrageous but that is the exactly experience of women on the margins, especially indigenous women.

What has been experience in Latin America? How are they different? What kind of results are we seeing there?

They have two kinds of police stations: there are ‘normal’ police stations but they also have ‘women only’ police stations. These stations don’t have cells, guns, or walls.  They are welcoming places, that is the key. The majority — but not all — of police who work in them are female and they provide an integrated approach. A one-stop shop. When a woman comes and reports then everyone comes to her: lawyers, housing services, family services and the childcare will come. She doesn’t need to go anywhere else. It’s all integrated and instantaneous. Often the services are co-located, they have support services all in the same building. It is very different to the model of police stations we know of. They also have police only cars for women ‘policy de la mujeres’ driving around the city. This in itself has a strong preventative emphasis.
They also have a mandate for prevention and they are actively involved in promoting awareness. Last year, there was massive campaign ‘ni una memos’ (not one more woman) and they managed to get every political and judge walking in the city. They also exist in the barrios (suburbs), they have wide reach and are incredibly efficient and effective to run when you compare them to domestic violence courts.

Are you optimistic about the future then for Australia? Are we heading in the right direction?

I would like to be optimistic. We have a Royal Commission in Victoria looking into domestic violence, the ‘Not now, not ever‘ report in QLD has resulted in an action plan, and a $100 million package to address family violence has been pledged from the Turnbull government. They are all good signs, but they don’t have the innovation required to tackle the systemic issues here. They come from people deeply embedded in the current approach and the current approach is not working.
I’m not attributing any malice in them, but I haven’t seen any innovation just yet. When we see the murder rate drop then I’ll be a bit more optimistic.

What message do you have for young people about this issue? What can they do to prevent domestic violence?

They should never be bystanders. If they know or have a friend in a violent relationship they should contact the authorities. Don’t simply put up with domestic violence. Taking action may not mean the end of the relationship, the problems may be correct. But you need to nip it in the bud before it becomes a deeply dysfunctional relationship, and you’ve got a house, a kid and all the sudden you are dependent on the other person and cannot get out.
Act early, act quickly, get advice and take some control. Being a victim is a powerless place. That would be my advice.

Kerry’s talk titled ‘Women and Violence’ is on at 1.30pm in the Playhouse and will be chaired by Julia Baird.

Guilty of having too much fun at The Ivy