Recently, the Plus Ones caught up with Ahilan Ratnamohan to talk about about his new theatre production Drill.

We are also giving away two double-passes to the show. You can enter the draw here.

Ahilan is a former semi-professional soccer player who has transitioned into theatre. His work is well-renowned in Australia and Europe and combines the skill and physicality of soccer with the grace and fluidity of contemporary dance. Ahilan talks to us about the inspiration behind Drill and his hopes for the future of Australian independent theatre and dance.

‘In Drill, three athletes meet in a late night, never-ending training session. A form of non-competitive competition unfolds before the audience. Sweaty machisimo gets a poetic makeover as sprinting, jumping, turning, pivoting, falling and accelerating merge in an indefinable training sequence which revels in an exhausted euphoria. Drill is an exploration of the choreographic potential of athletic movement and training; an attempt to transcend all human athletic capabilities, in a non-spectacular, practical fashion.’ 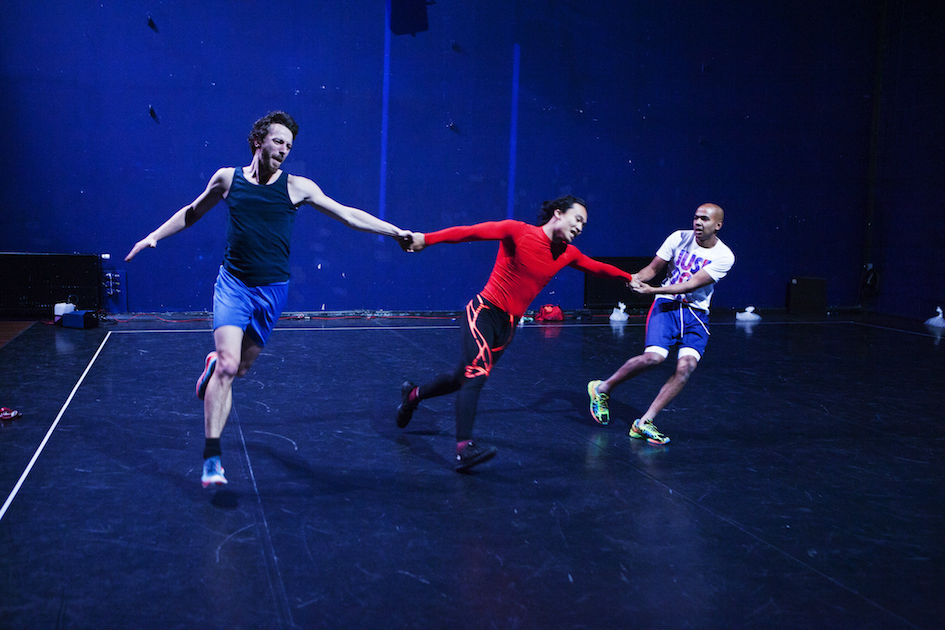 Tell us a bit about your background. You were a semi professional soccer player and now your work is a cross-pollination of sport and dance? How did that come about?

The two —sport and art — were two passions of mine growing up. I was a bit more passionate about soccer in those days and pursued both of those vehemently.

I studied theatre at university. While studying, I was doing projects with a company called Urban Theatre Project and they got me into the urban contemporary art scene. Then I just wanted to be an actor. I was keeping these two activities separate for fear of antagonism between the two cultures. Slowly, I got exposure to different artists in that community and I remember one time my brother and I did a piece with a soccer ball on stage and people liked it. So it became bigger and bigger the idea of using football in performance.

It started to happen for me in 2006 when went to Europe to give professional football a shot. At the same time, I came up with a concept to make a football theatre show about my journey to becoming a professional football player. It took a while, and when I came back to Australia it snowballed into a piece called ‘The Football Diaries’ in 2009 which I did with Urban Theatre Projects.

I also had the privilege of working with Lee Wilson from a company called Branch Nebula and he was someone who got me thinking about the physical side of it, and he saw my physical prowess as an athlete. So I got more interested in what was possible with the ball. I went on to make another production called  Michael Essien … I want to play as you, That was an ambitious project because I worked 6-8 footballers. What was interesting was that they weren’t as skilful with the ball as I expected. But what I loved about working with those guys is that we explored their athletic physicality in that piece and that’s what got me thinking about making Drill.

That’s very interesting. Tell us more about that inspiration that lead you to create Drill?

When I was working on Michael Essien … I want to play as you, I realised that athletic capability is whole movement language in itself and it has the ability to be choreographed. A contemporary dancer has a whole arsenal of movement that he or she can draw on and they are very proficient at it. My thinking with Drill is that, in the same way, we as athletes — I’m not restricting it to soccer players —also have an arsenal of movements that we can draw on. So that was kind of the inspiration behind Drill.

I am trying to create a challenging, contemporary and innovative piece. I try and use this physical language that is inherent to dancers – this athletic ability —  and to bring to them this movement as an ‘in-point’. Drill doesn’t have any music but there is an immense soundtrack to it with constant pitter and patter of feet and panting etc. From experience, I have heard from footballers in Europe who have never seen dance before come and appreciate the show, because they can understand the patterns.

Who are the other people involved in Drill?

There are two other performers: Immanuel Dado who is a contemporary dancer based in Perth. He got into dance by being a BBoy to begin with and he is a bit of a movement junkie. He played rugby and he was a sprinter and a lot of different martial arts.

The other person is Kristof Persyn . He is a Belgium based acrobat/circus artist and he comes from a basketball background as well.

I wanted to work with athletes but I also realised that working with people that had an understanding of movement would also help the show. When I was working with Imanuel, sometimes I had to tell him to not to dance it because I want it to be real. I wanted the movements to be true to the footballer or athlete in general.

I have a broader question. How do we get more people, and especially young people, into dance and theatre? Perhaps there is not a wider appreciation dance as a sport or an appreciation of the cross over between the two. I am wondering whether part of the project is to bring dance to a wider audience?

Definitely. But I wouldn’t say that this is a project purely focused on that – it’s still an artistic piece. But an artist, I’m forever trying to bring different audiences into the theatre with each show that I make. That’s purely because when I was growing up, I didn’t connect with the pieces that our schools took us to see. Even if people say Shakespeare is universal, and I agree that his pieces are quite amazing, I still didn’t connect with them in a way that would get me to go back to the theatre on my own accord.

I think these days there is an appreciation of dance  in youth culture — BBoy and street dance — but I guess you can draw a line between these three minute flash dances on TV and contemporary dance shows that have a dramatic feel to it. I think we don’t get enough kids to go to theatre and I understand that myself because I didn’t know these pieces existed until by chance I got to and see them. I was lucky I saw a couple that were amazing and changed by whole perspective on them. 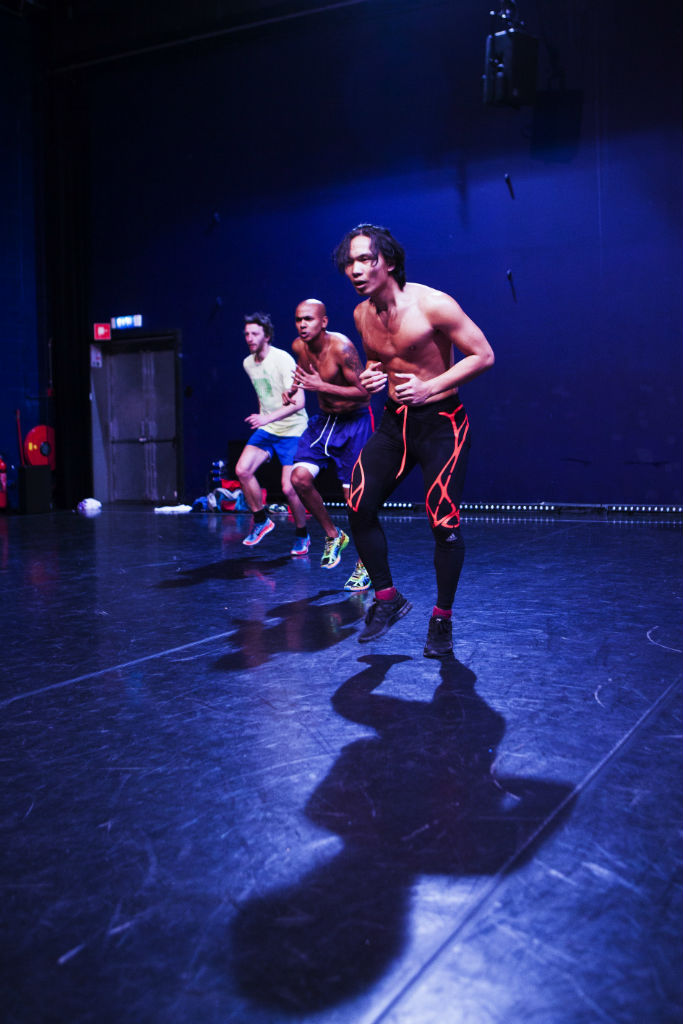 What are your views on government policy towards the arts and dance at the moment?

I wouldn’t be where I am today without help from the Australia Council. My issue in general in Australia is that there is different appreciation of dance and theatre culture in Australia than in Europe. I think that’s a shame and I think the government puts so much emphasis on sports. From my experience in both worlds, there is so much to be learnt from art that leads to conversation. If we can appreciate art half as much as we do sport, that would affect the funding.

When you look at the statistics on the spread of funding in Australia, we fund Opera and Ballet, but we don’t fund contemporary and independent artists to the same extent. I likened it a bit to film. Hollywood films are easy to watch. You could also go watch an art house film for a fraction of the price, but they are not easy to watch. They challenge you. Challenging stuff is harder to watch and I think the government has an obligation to fund that, and to fund it well, because it creates conversation.

The other thing I’d add is that we have a very economically minded government, but they don’t see the economic value of art. If you look at Belgium, (where I’ve been working) in the 80s and 90s they put a huge amount of funding into the art sector and 20 or 30 years later they have such a high profile. One thing that is unquestionable, the Belgium dance and theatre scene is recognised as one of the best in the world. There are economic reasons for these things – art makes the city in the sense an that gets lost in all of this. Look at the most cosmopolitan cities in the world – New York, Berlin – and they are known for their art as well.

In addition, there is a Dance Circle (free event) including Vicki Van Hout in conversation with Ahilan Ratnamohan post-show Friday 16 October 2015, 9PM

The Bar that Jack Built