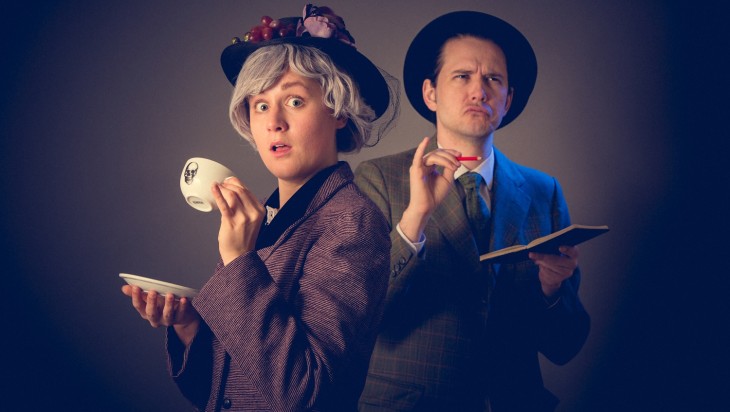 Detective stories, murder mysteries, and legal thrillers: these are among the most widely-read genres in literature, immortalised in the classic board game Cluedo and now a popular way to spice up a traditional dinner party. We love these kind of stories because they are fascinating and often disturbing puzzles that need to be solved, and they raise the fundamental question: why do people do what they do?

Murder Village: An Improvised Whodunnit brings all the excitement and intrigue of an Agatha Christie novel to the stage, transporting its audience to a sleepy village in 1950s England with a bloodthirsty reputation. The Inspector begins by introducing the four central characters: the no-nonsense leader of the local girl guides, the down-on-his-luck orphan who is still searching for his parents’ murderer, the eccentric war veteran with a drinking problem and the owner of the recently renovated village pub, one of which won’t survive the performance. Another will become Murder Village’s latest killer.

The show features performances from some of the best improvising comedians from The Big HOO-HAA!, Impro Melbourne and Impromptunes, and no evening is quite the same. Improv can be hard to do well, but the show had a great natural flow and energy, and rarely did any of the cast falter; even when things took a turn for the absurd, you could tell they were having just as much fun as the audience.

A laugh-out-loud, rollicking good show; who knew murder could be so entertaining?

– Charlotte
Charlotte Pordage is a writer/editor from the UK. When she’s not attending events, she can be found riding her horse Rudolph and enjoying a good cup of tea. View more of her work at charlotte pordage.com.

Check out our guide to the top shows, and all of our 2019 MICF coverage.

View all posts by charlottepordage →