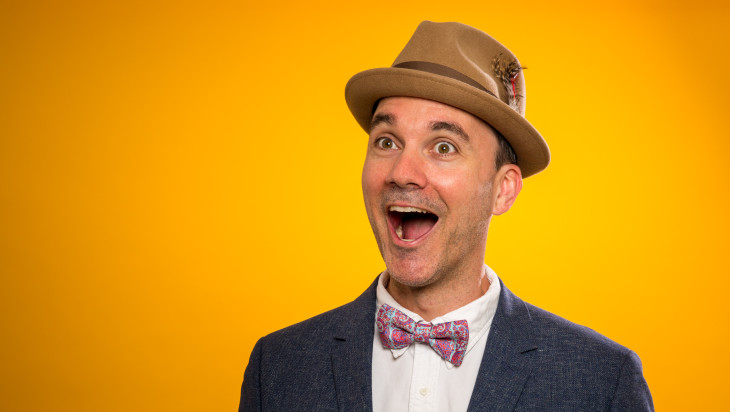 Mark Gambino is a renowned improv legend; starring in a plethora of troupe formats each festival, and reminding us of how talented he is at the boldly character driven style that can take a scene in a successfully new direction. The Return of Grazie Fibonacci experiments with a very different form of comical portrayal: the solo sketch artist. It is here that Gambino reveals to us what broods internally in his writing landscape, and what results is a pleasurable and obscure journey through an intellectually character driven fanfare.

The characters that Gambino presents onstage range from the seemingly mundane to the outright quirky, yet all reveal something inwardly askew that radiates through the character shell and produces the soul of the show. From a whimsical pilot to a whistle obsessed referee, (or so we think), there is a real sense of cerebral content shining through as each character presents their shtick. Call-backs, of course, make a delightful and necessary addition.

The show attended was a preview night, and with that came a few hiccups that were expertly owned and twisted back into the humour of the show. Some tightening of content and chops and changes will no doubt occur over the season, (as is the standard fare of this style of solo comedy work), but it is easily identifiable, even on a preview night, that there is a comedy veteran on stage who has a knack for character beats, a knowledge of how to warm a crowd, a penchant for analytical penmanship, and a love of the goofiness that the festival goers enjoy. There are only days left now for the festival, so the quick will be rewarded.

The Return of Grazie Fibonacci runs from the 15th to the 21st of April, 9.30pm (50mins) at Tasma Terrace. Purchase tickets here.

Read The Plus Ones’ guide to MICF 2019, and visit often to see all our reviews.

Disclosure: The Plus Ones were invited guests of Mark Gambino.