Movement of peoples, social tensions and the power of a good love story still holds our national attention as flashpoint tales of humanity. These are made visible on the stage in an invigorating, dynamic production, the newest version of the musical that blasted the form, in Opera Australia, GWB Entertainment, BB Groups’ strictly limited season of 20th century Broadway classic, West Side Story. Taboo lies at the centre of this show which exploded onto the modern stage, changing the musicals’ form forever.

There’s so much on show here under Director/Choreographer Joey McKneeley vision- eclectic jazz-classical fusion songs and music, mid-twentieth century modernist dance design, progressive and vibrant costuming, dynamic drama from the renaissance switched up to gritty mid-’50s New York making a recipe for a sure fire hit. With stunning costumes and atmospheric, authentic sets, the gorgeous retro pzazz of  ground-breaking choreography, and quality vocals, you will find yourself hissing and snarling as gangs the Jets take on the Sharks rumbling in the dirty back streets of New Yorks’ urban jungle. 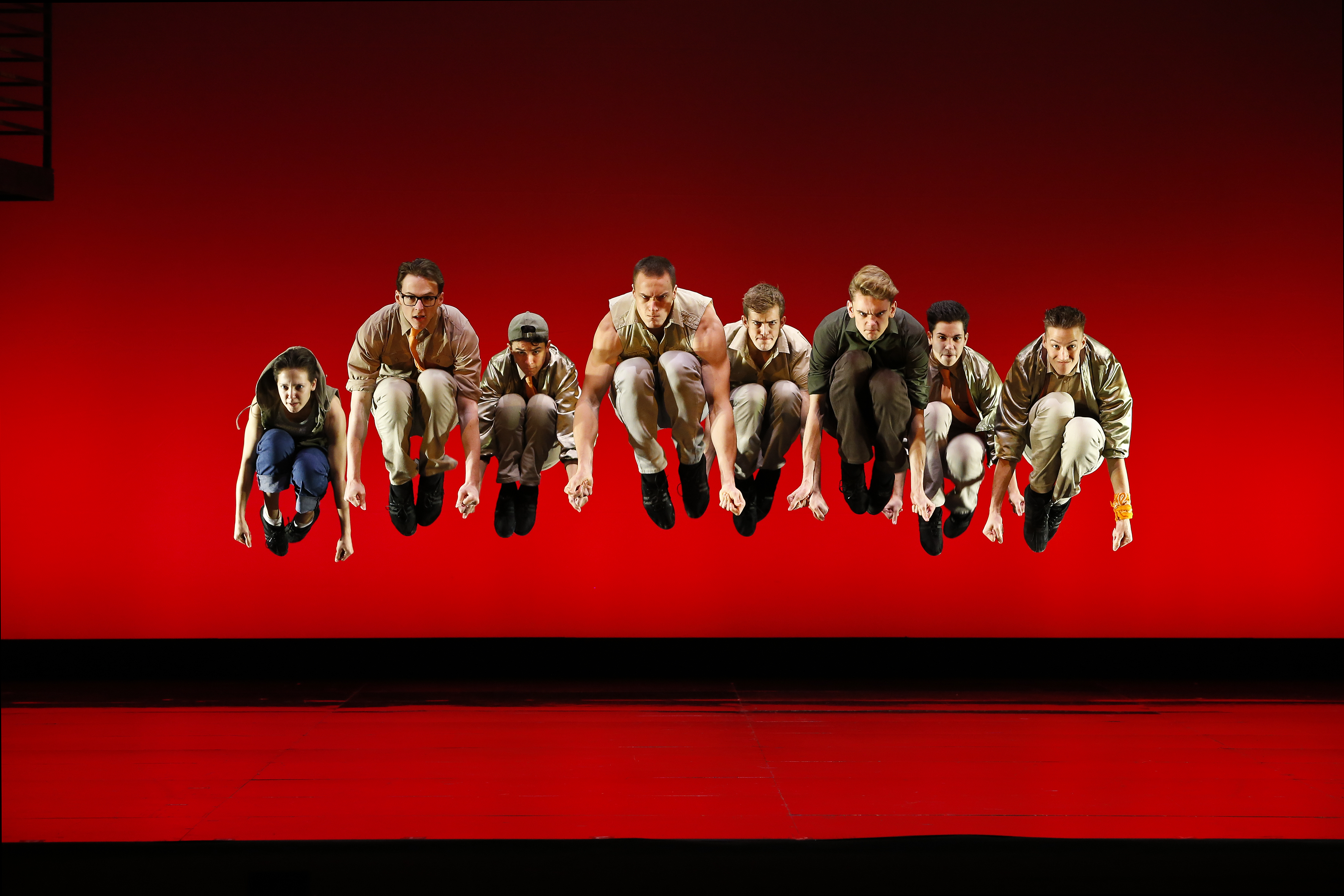 This remarkable collaboration between Leonard Bernstein, Arthur Laurents, Stephen Sondheim and Jerome Robbins produced a timeless masterpiece. Ten years in development, premiering in 1957, this collaborative giant brought young people and timely concerns centrestage when audiences were hungry for it. Get a taste of it from one of our best arts companies and some of Australia’s best young talent accompanied with live orchestration under Donald Chan. The music is thrilling partner to the dance and text and you will love hearing live accompaniment, creating a dynamism and flair with strings, percussion, brass, and woodwind.

A mid-twentieth century borrowing of themes from Shakespeare’s Romeo And Juliet romantic play about star cross’d lovers from feuding families, this coming of age youth drama is set in the rough working districts made up of  immigrants in 1950s America and focuses on teen gangs. Here, the warring Montague and Capulet families are established migrant Polish and the newly arrived Puerto Rican communities, competing for hierarchy on the same piece of turf. An All- American boy, Tony, and latina girl, Maria, fall in love and tragic circumstances outside their personal romance throws their desperate desire for union into collective tragedy. 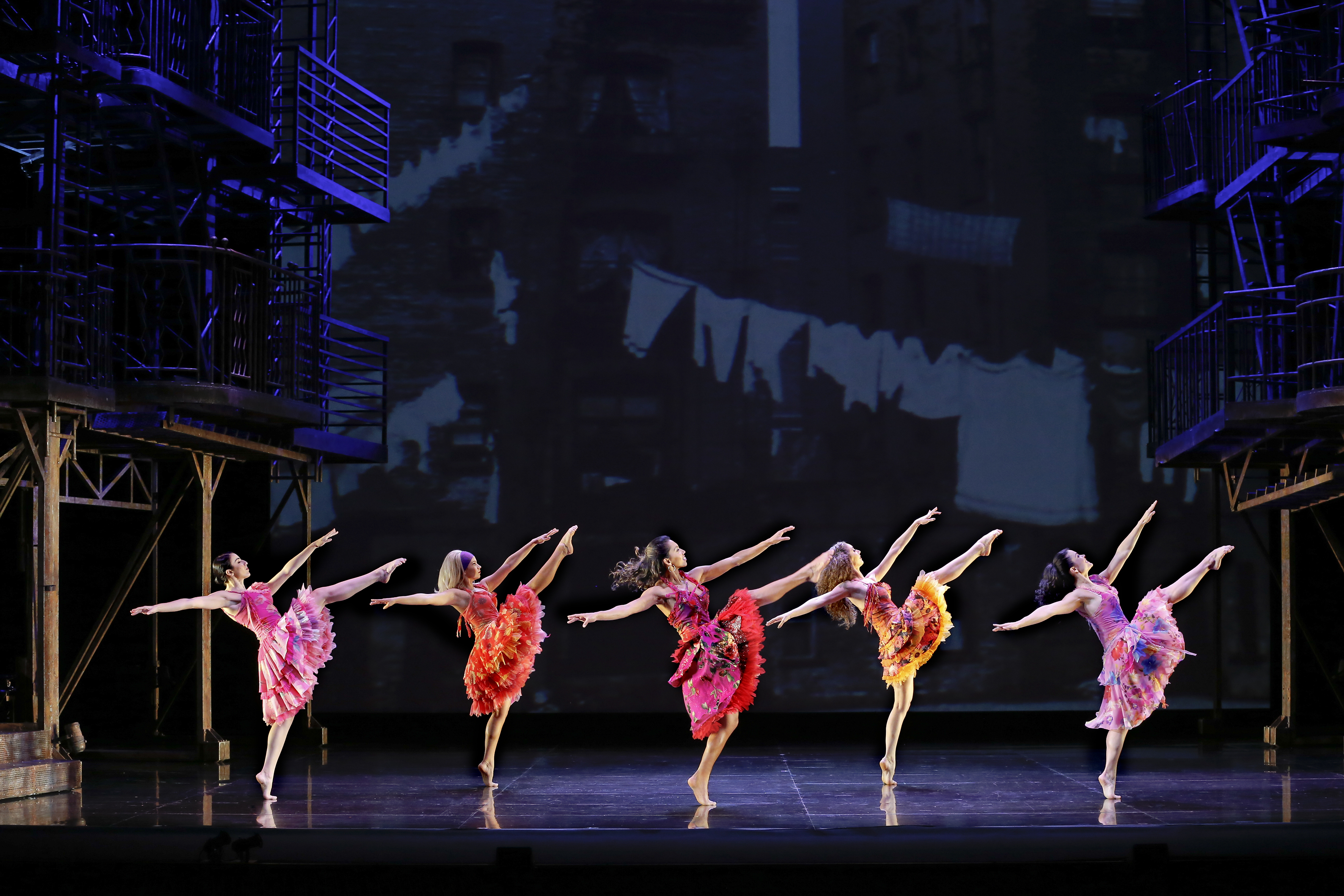 This work’s authenticity is fiercely protected and its a privilege to watch. The dance sequences and moves are pop culture classic which jump out at you, just as they were designed to, enthralling and disarming audiences with their rough chic. Real life street conflict inspired this work with Robbins visiting a high school dance in a Puerto Rican neighbourhood of New York to get inspiration for his iconic moves, with its famous two-legged leaps, flick-knife hand gestures, hunched shoulders, and jazz-influenced dynamic crowd scenes. The Director himself Robbins-trained,  you see the original moves honoured here and it’s a trip back in time into dance history. 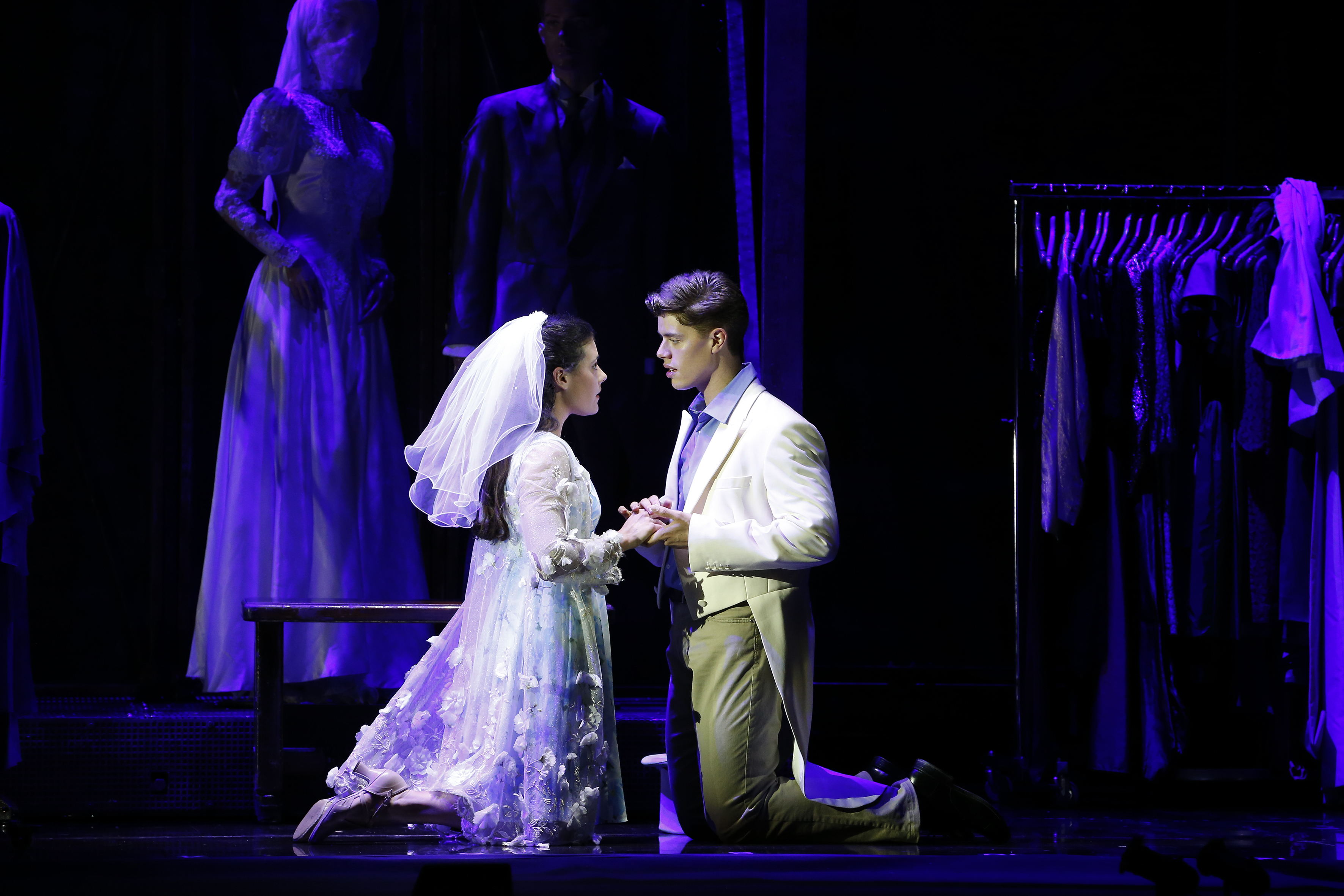 Up and Coming Sophie Salvesani as Maria with Todd Jacobsson as Tony, inside the Bridal Shop

There are some famous songs contained in this show and you’ll be hard pressed not to sing along as the girls behind me did.

Stirring anthems Something’s Coming, America, I Feel Pretty, with love song classics Maria and Tonight will see you sing the week out. This version is a chance for you to encounter these classics in the hands of skilled professionals.  Ballarat local Todd Jacobsson has great body language and youthful vigor as Tony combining beautifully with the high-pitched vocals and girlish loveliness of regional Queensland’s Sophie Salvesani. Their balcony scene vocals are moving.

From the ensemble, Chloe Zuel as Anita has mature stage smarts, brilliant dance moves, and star power and she commands the stage. Noah Mullins as Riff has lithe balletic dance technique and is one to watch. When the ensemble groups of men and women combine, this show is electric and you will thrill at the crowd scenes.

Officer Krupke in Act II, the famous boys scene which every school age theatre wannabe loves to perform, went off to great applause from the audience, with its cheeky moves and lyrics, and comedic slapstick. 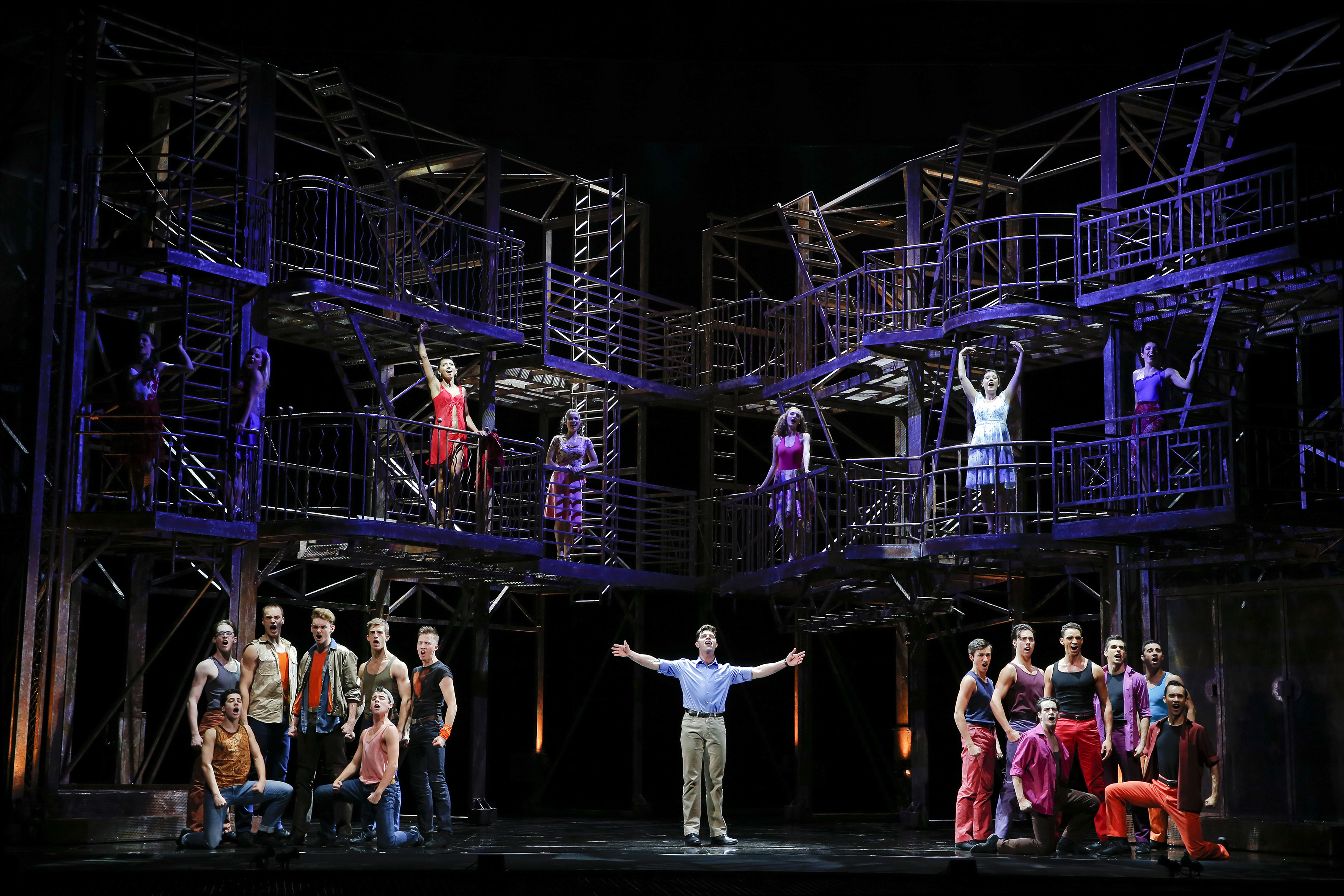 This work’s brilliantly conceived synopsis, high points and dramatic moments highlight racial and social tensions as well as the human struggle while also exploding and reinventing the form. Four giants of musical theatre created a bubbling pot of incendiary talent resulting in a night of top theatre that energises every audience member.

Seeing this musical is to witness a slice of pop culture dance and musical theatre history.

Book early so not to miss this strictly limited season and see all the moves in action. 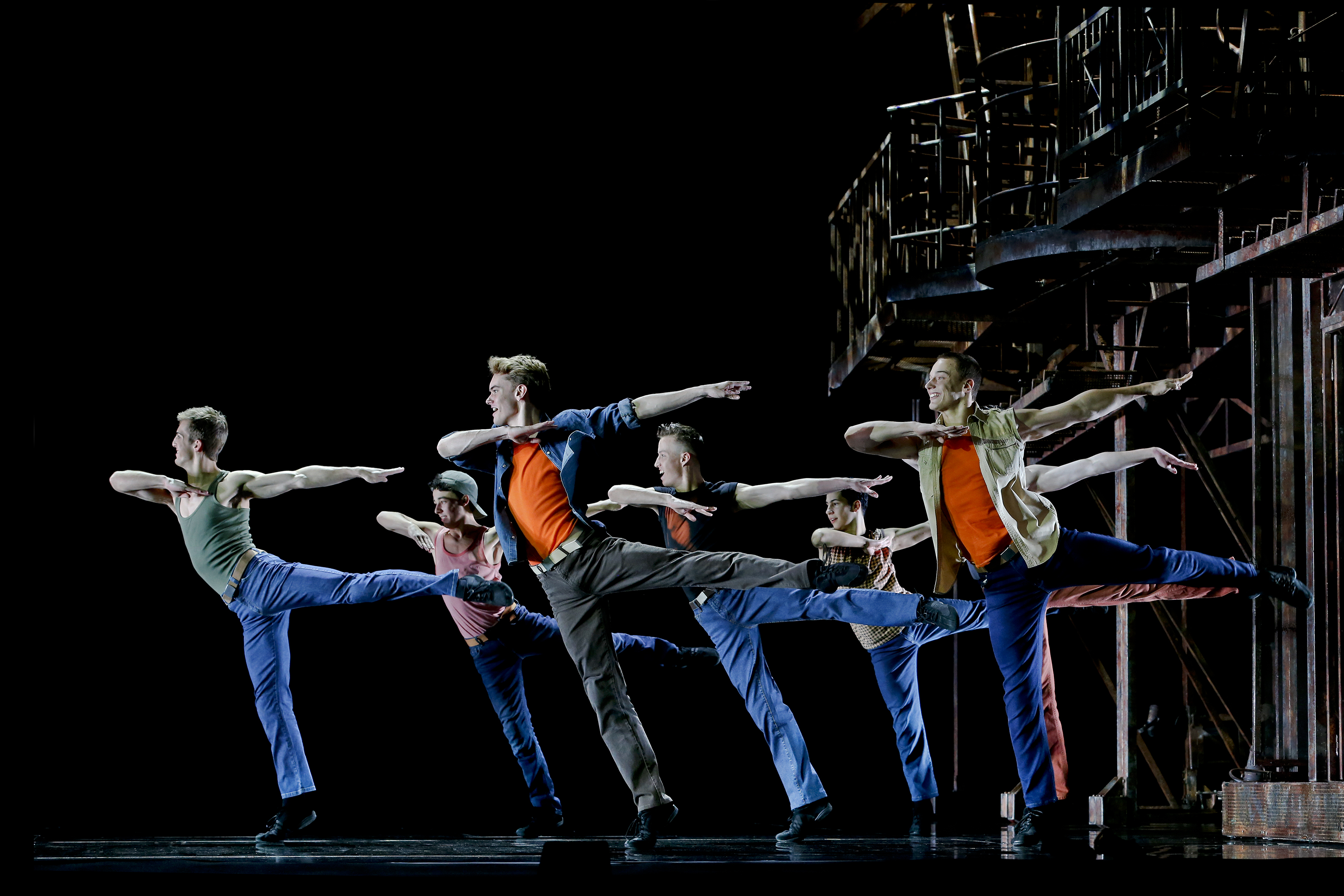 is the Theatre Specialist for The Plus Ones, Melbourne.  A performing arts and English literature graduate of VCA, UOM and Deakin,  she has a flair for bold, non-traditional performance platforms. An active contributor to The Melbourne Shakespeare Society, on the street, or in the box seat, she is always looking for quality works that push the envelope.