Will the new players cope with pre-season training whilst fasting for Ramadan?

With themes as far apart as refugee migration and footy change rooms, Damian Callinan’s The Merger surprises on a range of levels. That one man alone on stage can conjure up so many recognisable Aussie characters is what impresses, though it’s hard to look past the story, booting a goal straight into the nation’s heart.

A piece of original writing by multi-award winning actor and versatile theatre man, Callinan has crafted another piece of iconic Australian theatre. Best known to TV/film audiences for his roles on Skithouse, Before The Game, and Backyard Ashes, and guest appearances on Spicks and Specks and Melbourne Comedy Festival Gala, his cup runneth over. Having talent to spare, this prolific writer and podcaster makes theatre magic out of anything he turns his attention to and his artful expertise is our reward. In this case, its hilarious Aussie raconteurs and natural fools combined with the real life tragic tales of those fleeing war or persecution overseas. 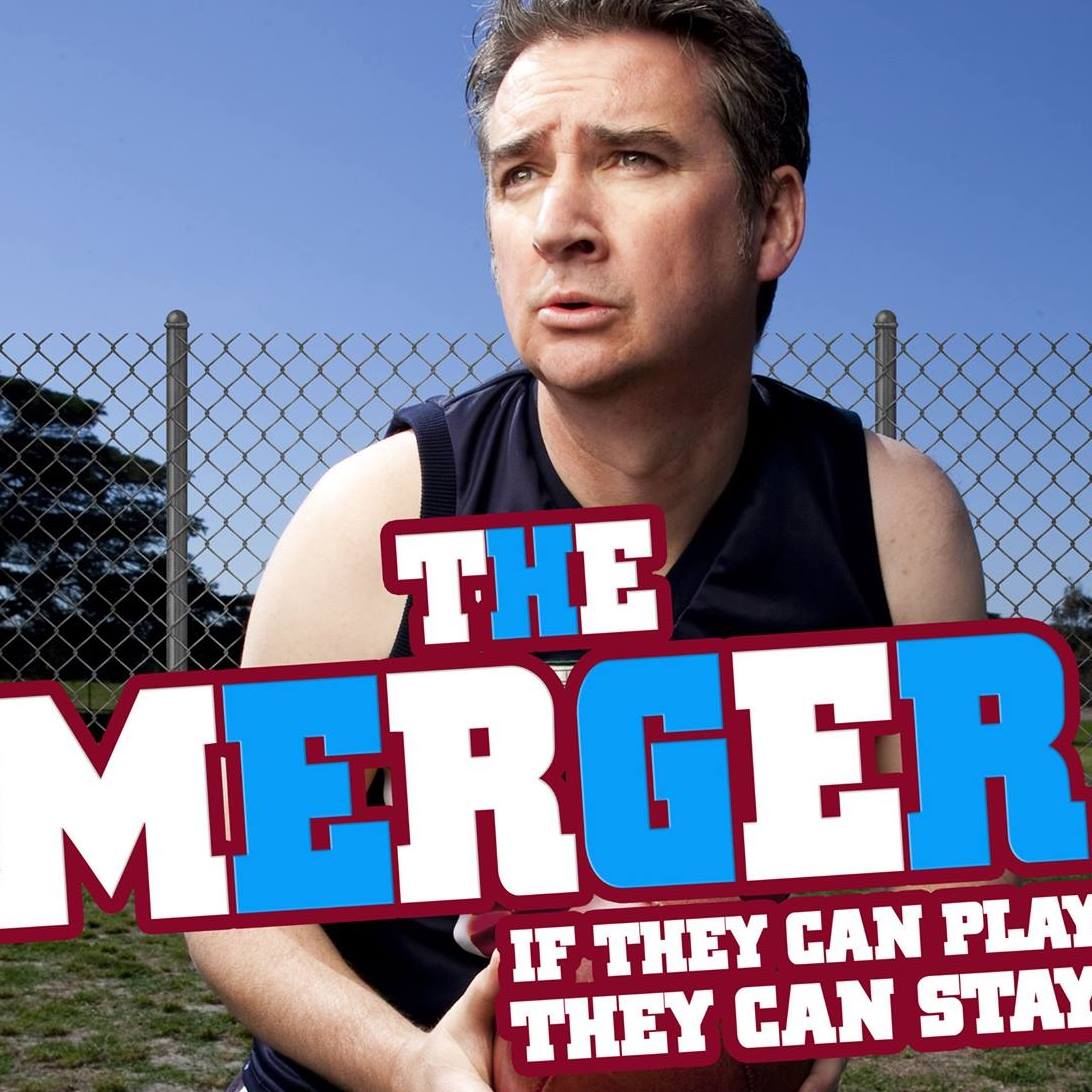 Developed in 2009 to touch on issues of racism in regional communities, this tale leaves no stone unturned, and holds a mirror up to the life those on the land live. A story touching regional downturns, community and people power, fear and prejudice, and shared struggles, this heartwarmer is a masterstroke of humour and depth. Replete with national symbolism, larrikin humour, and pathos, this script with touch you whilst tickling you to death. Its clever flair for colloquial reference and pun will see you laughing like a galah- there’s so much home culture evoked.

Award-nominated, the story concerns the flagging membership of the Bodgy Creek Roosters Football Club, which look set to die, or merge with its arch rivals, the Hudson’s Flat Cougars. Local hero Troy Carrington comes up with the idea to recruit refugees from the Asylum Seekers Refuge Centre as a way to build the team…and the story unfolds.

Masterfully confident, Callinan makes bawdy with the crowd, dropping in ironic timely mentions(Julian Burnside, Kevin Rudd, Peter Dutton). All the rituals of playing our national game are there- the chants, the group hug, the coaching invective, the hype, sausage sizzles, honking horns, and the post-match singalong. This all flourishes in a narrative which paints in the IGA supermarkets, dance schools, bad Chinese restaurants, the dying pulp mill, stolen aboriginal statuary, small town Primary schools, and meat tray raffles. 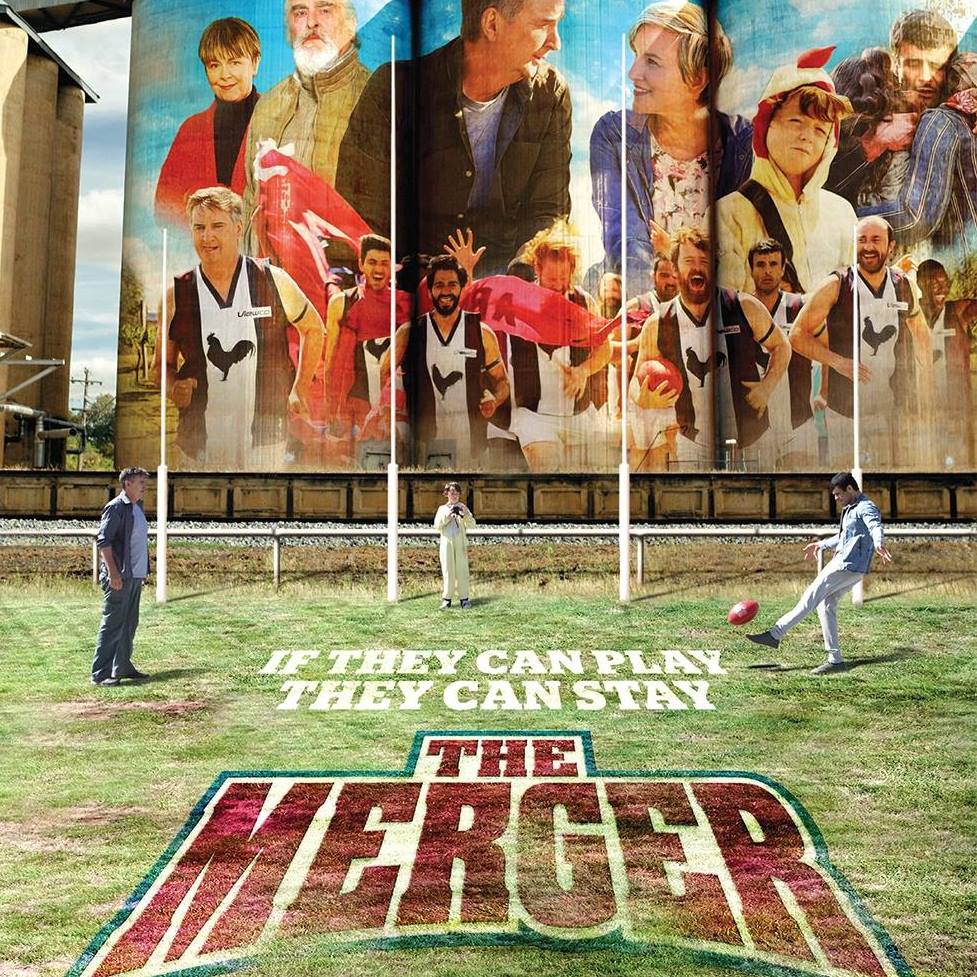 To the sound of community radio reflections and daggy regional advertising, Callinan  parades out in his footy gear, rooster high on the chest and mud on his socks. We’re pre-match in the warm up room. Standing beside The Bodgy Creek stump and a nearby eucalyptus tree bearing commemorative Premiership signs since the 1950s, he commands the crowd better than ScoMo, working us all in a cross between compere, actor, footy coach, and sociologist. Talking as if we were his team, various audience members are counselled on poor on field performance, Elizabethan umpire goading, to go hard and  take your medication, and of the rituals of pre-match sex(only tantric permitted).

Reflecting both insouciance and softness, watch for the early bum flash, a sign this piece is all Australian, being daring, cheeky, and honest. Thrown together in a forsaken part of the world, we are all migrants who come together to dream of unity and create community while at it. The Merger has acceptance and integration at its core.

Adapted into a film with a big name cast, another version of this beautiful story travels the world this year, the parable as of-the-minute as ever.

Get in the car and get down to The Chook Pen to see the action.

Read our Guide to the top shows, and all of our 2019 MICF coverage.

Disclosure: The Plus Ones were guests of Zilla And Brook.

Melbourne International Comedy Festival 2019: Gillian English- 10 Things I Hate About The Taming of The Shrew