A clash of two worlds meets in a confined space in award-winning Australian Stephen Sewell’s premiere new play, Arbus And West. This work is a piece of wonder, a mournful chronicle of patriarchy, women, sexuality, and identity in our modern age with bravura performances. It will have you spellbound as its hypnotic revelations point you in directions which surprise, everywhere but where you anticipated. If the devil is Woman you’d better hope you can handle two of the best in one room.

Melbourne Theatre Company do not disappoint, living up to their own very high standards of stellar script and casting choices, superb set and costume design, brilliant lighting and music, voice coaching, and strangely prescient themes touching on current issues. With Catholic Cardinal Pell’s conviction in the pages of the national media, with its child sexual abuse, the exposing topic of sexuality and compromise was never more electric in the air in Melbourne. 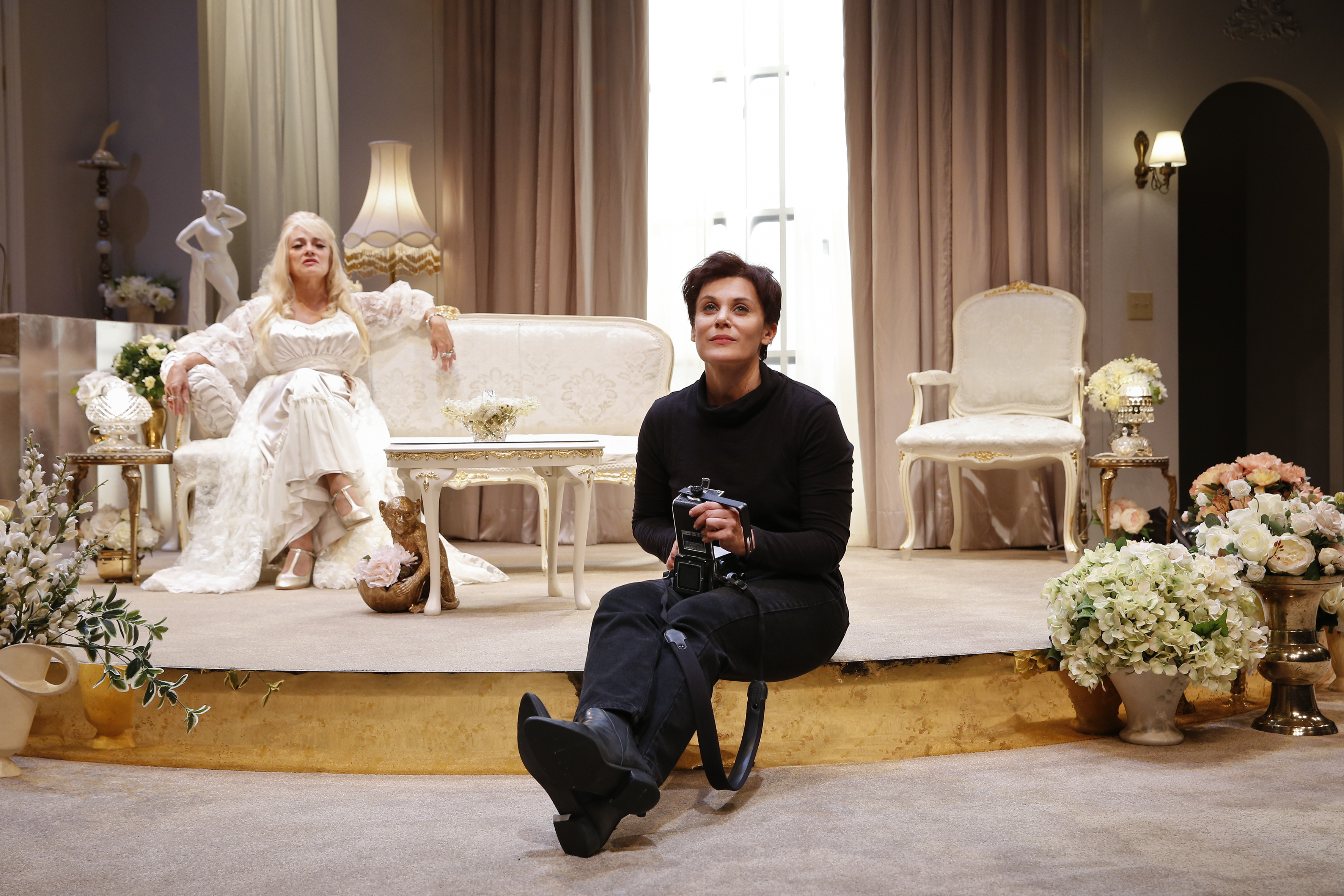 The premise for this work is one of greatness. Two of the 20th century’s most lauded artists meet to share their wares. What begins as a simple photoshoot commission for new media darling and well-connected New York Jewess, Diane Arbus, with old Hollywood dame and film royalty, Mae West, in her home apartment becomes a two-woman dark confessional and mystical exchange. The East coaster from a wealthy background ends her life too soon while her opposite lives to old age as a mark of victory from a childhood of sufferance. Their differences and cat-like circling of each other’s deepest intent is mesmerising as they question appearance and truth. The audience was enraptured and time stood still as we hung on every word and mood change.

Renee Mulder’s stunning pink and white set spells Hollywood dream for us. It’s voluptuous white and flesh pink tones with Aphrodite statue, gold monkeys, bevilled mirrors, full length curtains, platform steps, dressing room cupboards and doorways mimic stage and film sets and are home to the artificial reality of West. Into it strides no fuss androgyne Arbus, with her direct questioning and piercing desire to reveal what lies beneath the glitter. 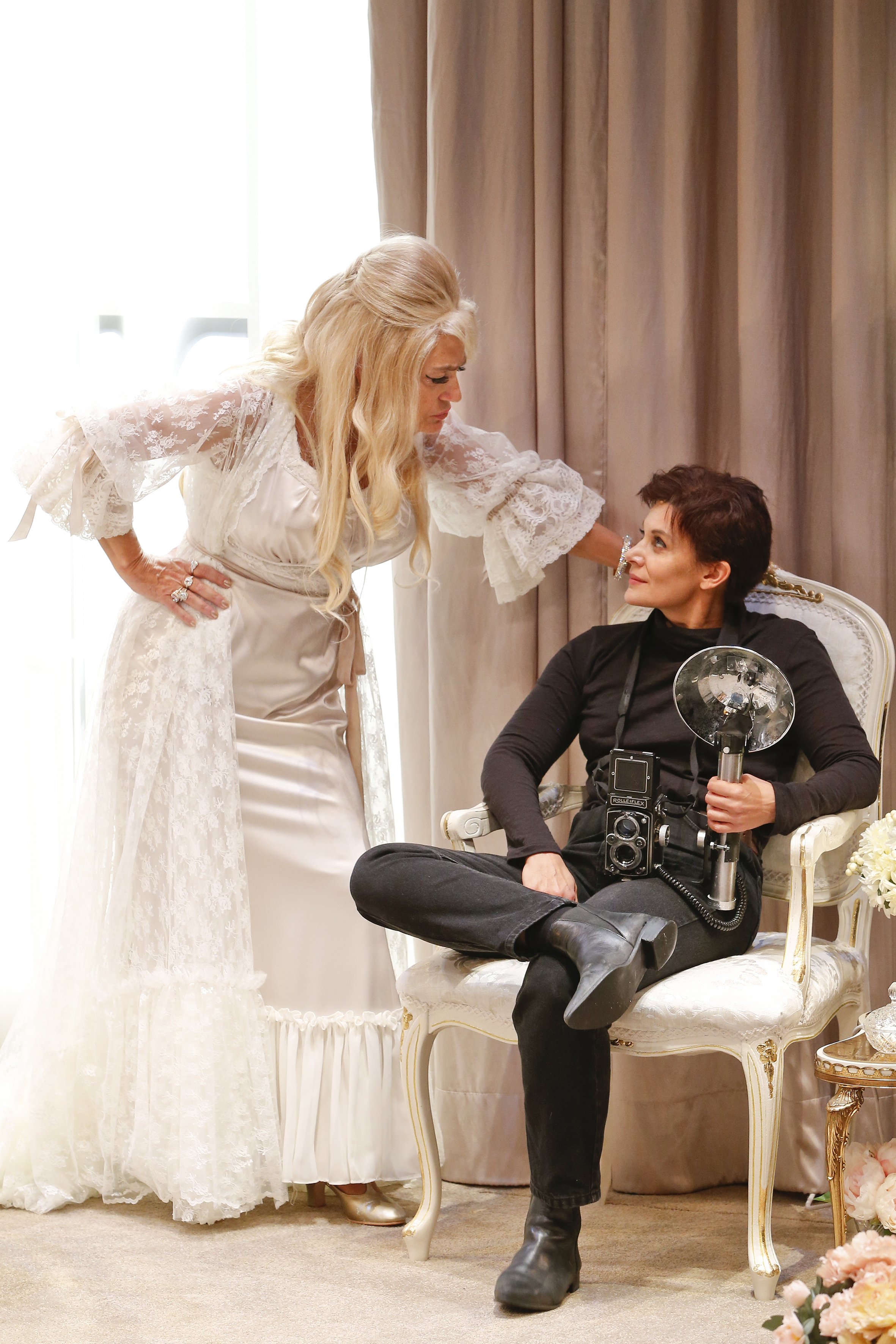 The two protagonists could not be more different, from opposite poles of the feminine. One woman from the black and white era, dressed in long gowns, ribbons and lace, with cleavage and one-liners as her doorkeeper survived a childhood of poverty in Queens. The other, of limited speech, slim with boyish cut, in the black basic of the Dylanesque beatnik stuck in a marriage of social convenience who feels stifled. West expects a male, and is also terrified of Arbus’ penetrating work with its psychologically forensic gaze.

What commences duel like ends in exultation. This play goes deep. Early it knocks off topics we’d expect of a one-to-one media interview – of the two faces of woman, public v private, and of self-promotion vs revelation. Much more is then covered including lost childhoods, rape, murder, depression, control, relationships, and talk of power. Sewell’s creation, under the sensitive, attenuated direction of Sarah Goodes, gives us ordinary women turned mythical, both carnal and primal. A play that started powder room turns caustic cathartic. Their alternate strengths serve as flashpoints for the bigger story of the cost of being a woman in the world. 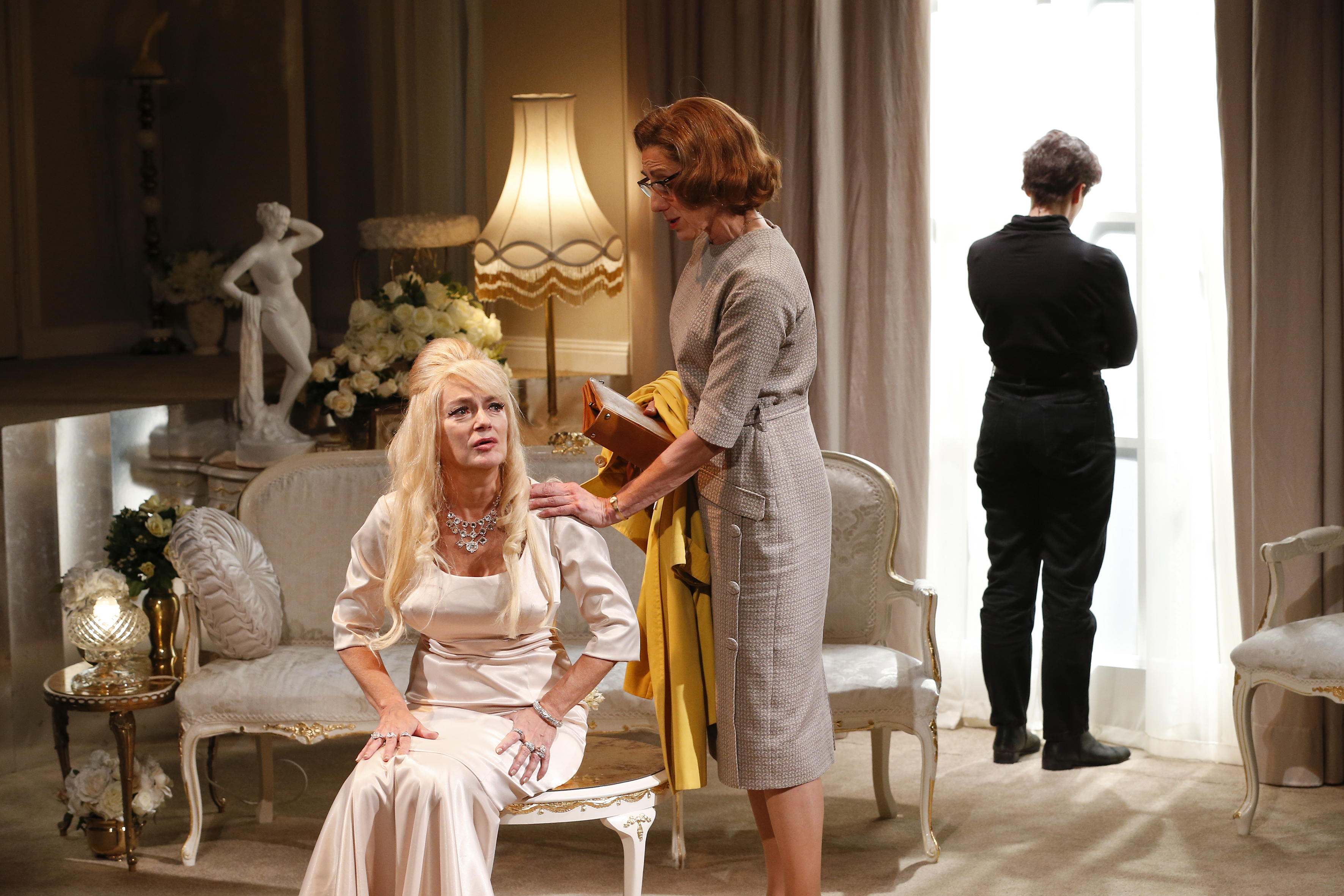 Mae West with her dresser played by Jennifer Vuletic

This is a superb piece of timeless drama. Melita Jurisic, with her lilting postures and vocal tone, offers up the performance of a career as the faded sex goddess matched with compelling interiority by the recognizable Diana Glenn, of tv and film fame, who gently reveals the repressed inner turmoil of Arbus.  Both women celebrities to the world, hidden beneath exteriors which defend a wounded vulnerability, this beautifully worked gift of a play has all the elements of Greek drama. When it comes to drama and women, no one surpasses the Greeks, and Sewell approximates the ritualistic rhythms, revelation and bedevilled chaos of their stories in his iconic composition.

You might go to this play thinking it will be a ditzy, fun pairing of celebrities who will entertain and find within it the deepest, darkest questions of womens’ lives. This rich baring of souls and psychic encounter haunts both through the show and after. The magic will grab you and take you to some unplanned places, and this work has to be experienced live to be understood.

Modern Chinese Degustations for both Vegans and Meat Eaters