In West Australian theatre company Barking Ghecko Theatre’s stage adaptation of Australian author Gabrielle Wang’s award-winning 2009 novel, A Ghost In My Suitcase, the set, lighting, props and masterly execution by the actors tells lots of this engaging coming-of age-story about a 12 year old Australian girl who returns with her mother’s ashes to China. Yet, it’s the refined bigger narrative about making peace with your past, your people, and yourself, that serves up deep meaning to audiences in this world premiere showing. This lively and very 3D presentation lifts the magic of this story from the page, with its vivid characters and settings and metaphysical otherness, and does justice to this beautiful, elegant and moving tale about the bond between a mother and daughter across countries, eras – and realms. 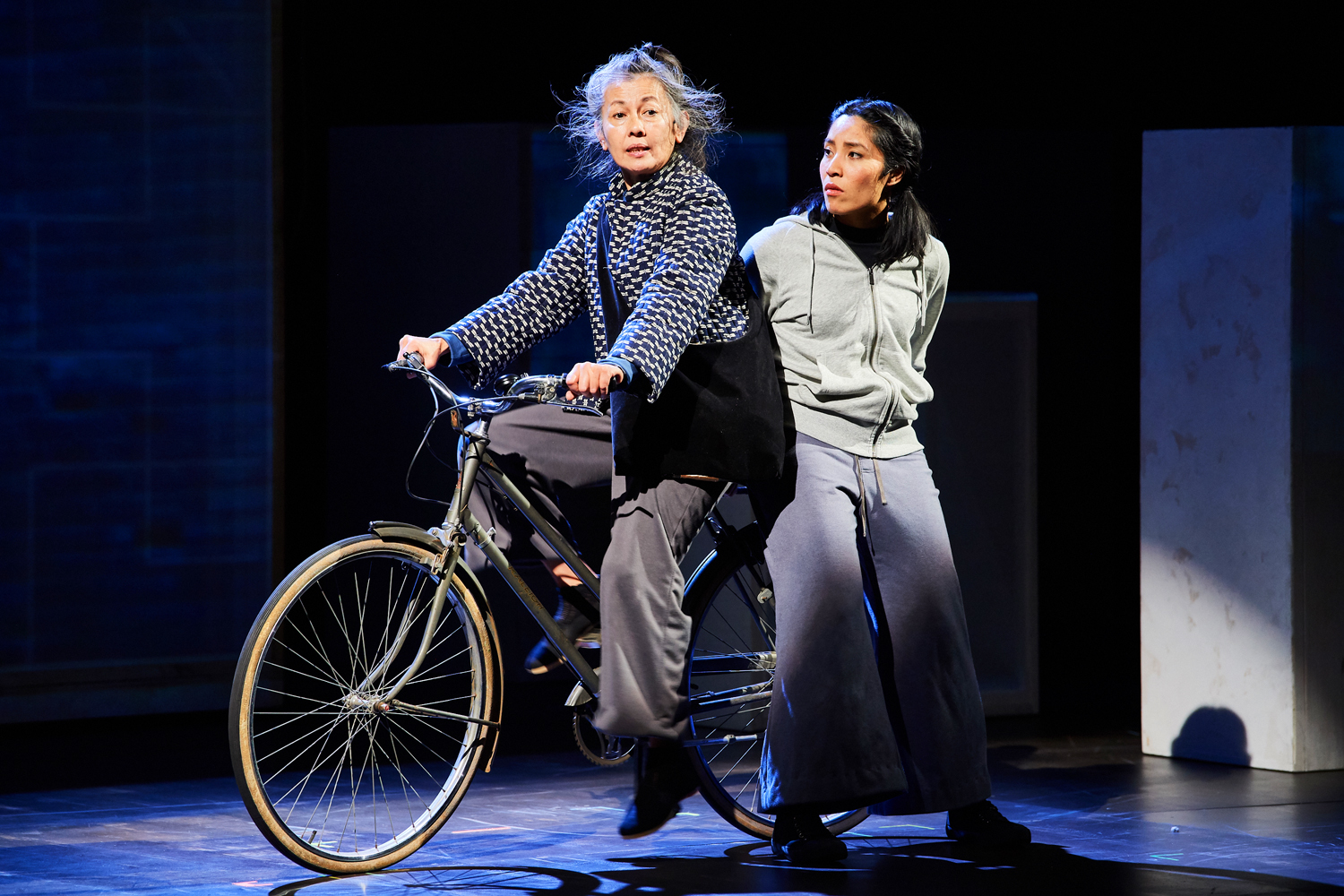 Amanda Ma as Por Por with her granddaughter Celeste, by Alice Keohavong

Protagonist Celeste is born of a Chinese mother and French father and identifies as a typical, modern Australian. Her homeward journey sees her spend quality time with her maternal grandmother, returning to the place where her ancestors originate, the Isle of Clouds. A village high in the mountains (and a long way from commercial Shanghai) is swathed in rising mists from the water on which is sits, creating a mirage of clouds and mysticism. Celeste is here introduced to the tradition she has been born into – ghost hunter. All the women in her mother’s family line are born with this psychic gift. She apprentices under her grandmother, Por Por, alongside adopted granddaughter Ting Ting, as they proceed through a series of challenges ‘speaking’ with the spirit world, cast out evil demons and hunt down past stories which cannot rest in peace. 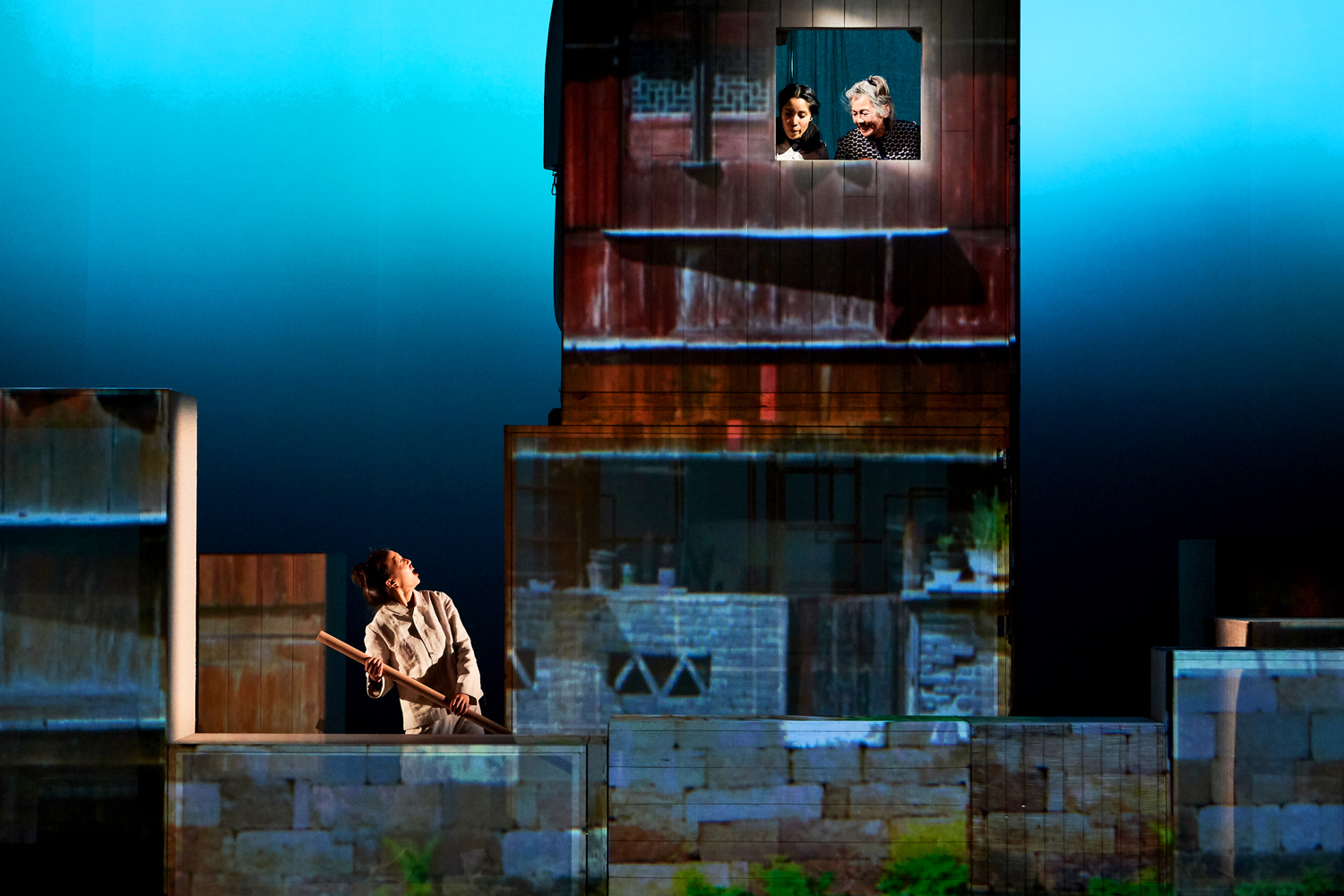 Historical dwellings on the Isle of Clouds

The story is a much loved early Secondary school novel read across the country. The images presented, of a village on water, bargeside shops and canal selling, of the songs and folklore of old China, the clash of today with ghosts from the past, women’s relationships, and the connections of the family line has captured the minds of readers since its first release. Celeste‘s inner struggle, to farewell her beloved mother, to acknowledge her inner powers, and to integrate the cultural ancestry from both sides of her background, is, however, the bigger story and what deeply touches the reader.

Playwright Vanessa Banes gifts us some very moving, clever,and profound lines in her version which follows the novel. This production bases the action around a set by designer Zoe Atkinson of variously sized boxes onto which video and artistic projections map out location- Shanghai airport, Bao Mansion, the Isle of Clouds, the canals through which sellers ply their trade. These are moved about briskly as scene changes and merge from building edifice to a dwelling’s inner structure, to secret tunnels and trapdoors, staircase and platform, allowing the locations in the story to be visually represented. The colour and tone of the set and lighting is both brightly fluorescent modern day and cool blue and grey ancient China, reflecting the two time zones in the story. 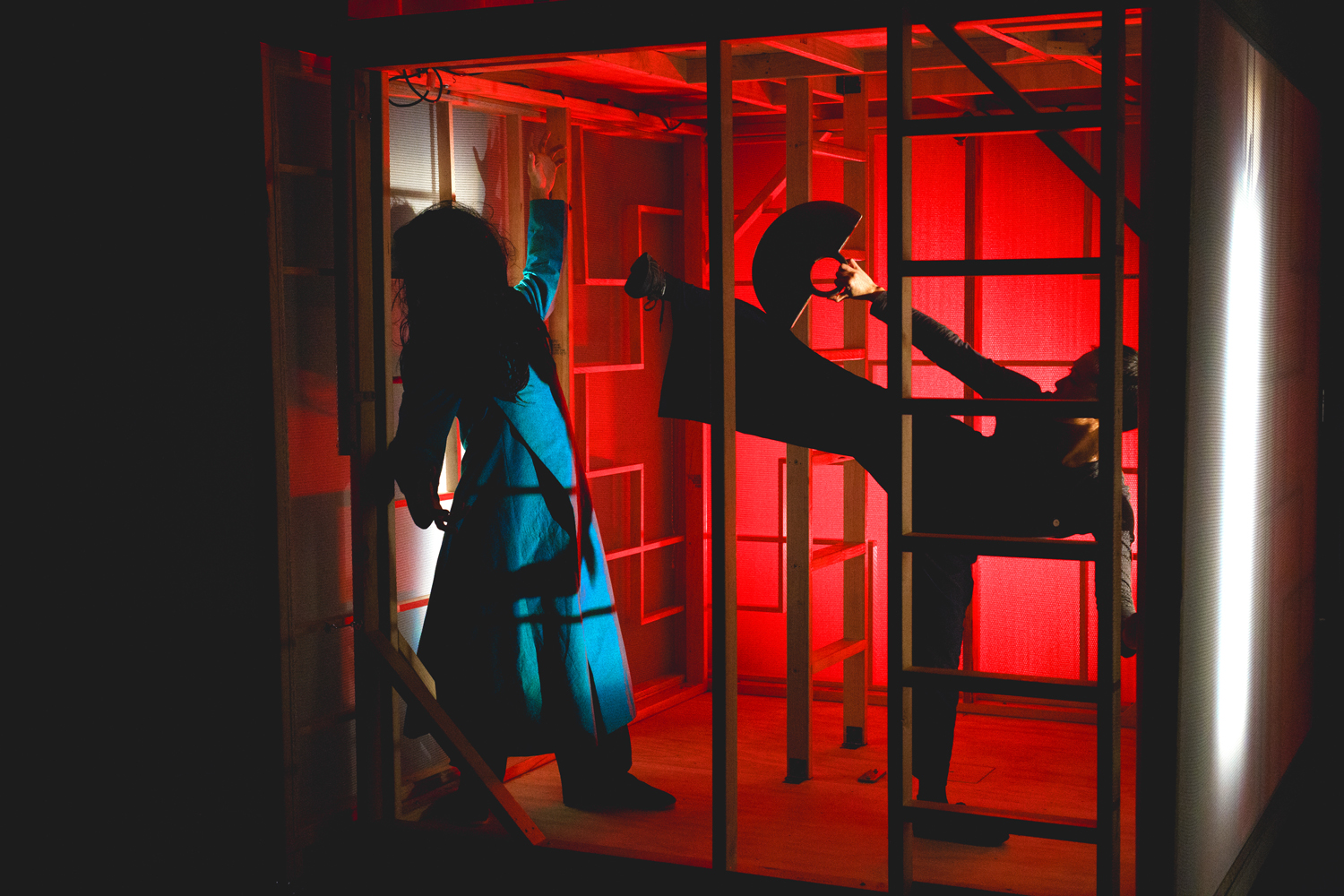 Ting Ting fights the ghost of her paternal grandfather

Co-directors Ching Ching Ho and Matt Edgerton have faithfully adhered to Carey’s brilliantly crafted story, evoking a realistic ‘China’ as well as a very 21st century young Australian in Celeste. Like the character, we have a longing to know another world, another way of experiencing life and philosophy, and this production serves this up masterfully. Rachael Dease’s sound design is loud and animated and transports us into the drama of the moments. When ghosts are released, full house lights flash to signify their exit. Some artful sheet puppetry embodies a bed-bound ghost’s release.

The lively cast relish playing all the nostalgic characters as well as a few nutty ghosts. Amanda Ma as Por Por held our attention with her melodic, wistful voice work as well as through her physical embodiment of an old Chinese grandmother, dressed in her traditional jacket. It is lovely to hear old songs sung in Chinese with their musical tonal qualities.  Andy Fraser’s fight choreography is thrilling and dance-like and the sequences when all three women fight the biggest ghost at the old family home present great gestural and sculptural design.

This tale weaves a wonderful web between dualities- cultural, familial, and spiritual. Our audience attracted adults and children, captivating all, with life lessons across a range of ages. With six performances only, secure the experience quickly.

Melbourne International Arts Festival runs from the 3rd – 21st October 2018. To be in-the-loop on what’s happening, or to find a last-minute tickets, check out their website here.

Disclosure: The Plus Ones were guests of TS Publicity and Melbourne International Arts Festival.