A play about the first female students at my old alma mater, The University Of Melbourne, and one of Australia’s first female graduates of an Australian university, Ida grabbed my attention for two reasons. As a former student who found her way twenty years ago to the Student Union’s fabled Theatre Department, I went to step inside the place my first works showed at in 1994. I also wanted to find out more about the battle earlier women fought so future female students like me could enrol without issue to study at one of the top universities in our country. There were period dresses to see, stories to hear, and one memory lane to tread.

Directed by Petra Kalive with scintillating 21st century song, sound and music by the superb pianist Ashlee Clapp, with the Ensemble, this musical is an adaptation after Anita Punton’s Princess Ida Parlour, first presented in 1994. Formed in 1888, The Princess Ida Club occupied two rooms on the upper story of the east side of the Law Quadrangle, part of the lovely, historic sandstone part of today’s campus. It enabled all women at the university to meet socially and speak with one voice on university affairs, such as their agitation to have females admitted to medicine (a long time coming). Its name was taken from a famous Gilbert And Sullivan comic opera of the age, spoofing women studying at university. 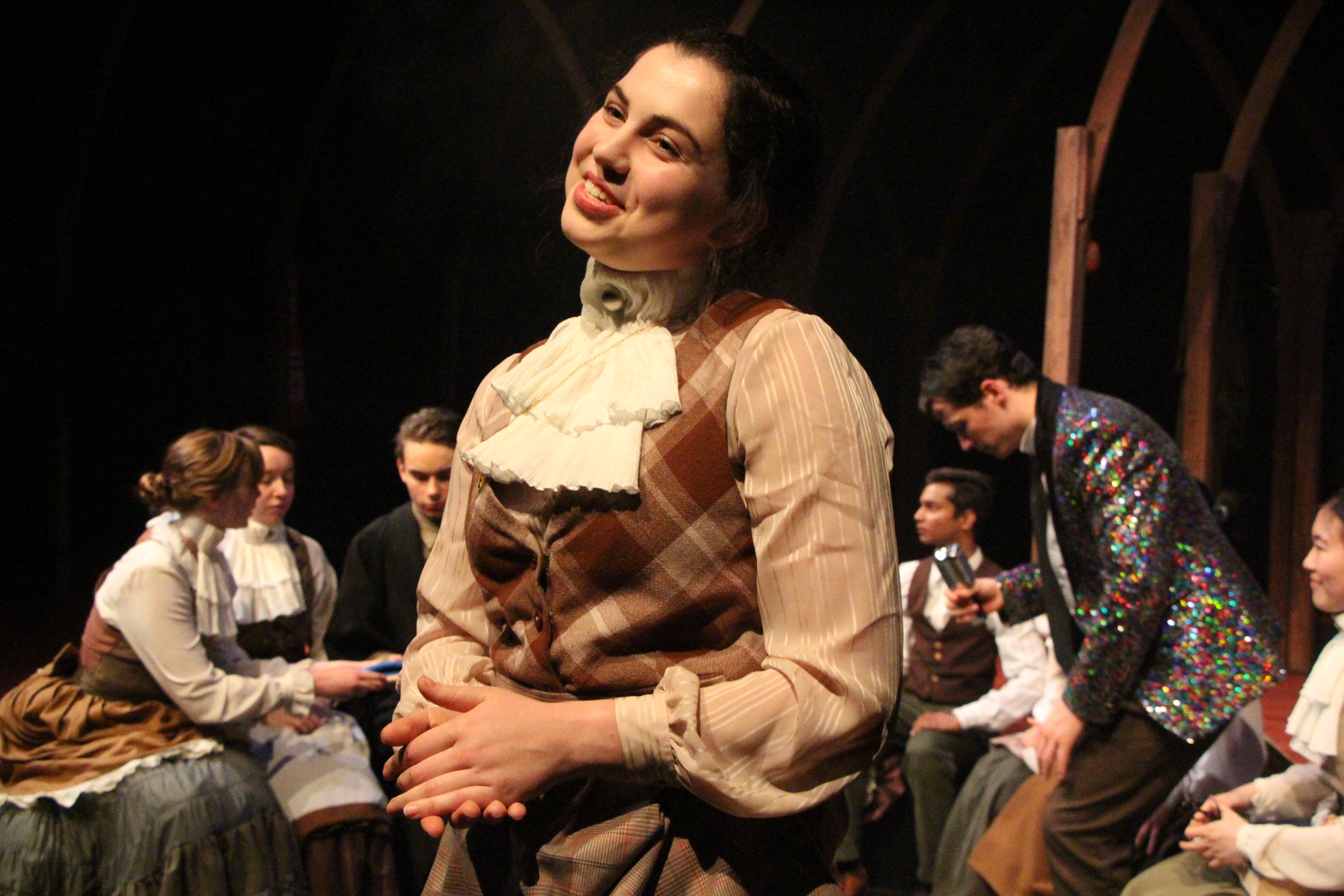 Early debates about the presence of women on campus are well known to us today. The charges of disturbing men’s concentration, bettering male results, a likely fixation with flirting and beauty, not actual study, damage to reproductive functioning, and an overall threat to the hegemony of serious academic rigour, presumed the domain of the men only, were all hotly contested and debated at the inception of women enrolling. Add to that the rising question of women’s suffrage and you have an all round hot potato of a social topic for the era.

Wonderful highlights of this story told in song and music include characters like 1880s admitted Bella Guerin, first graduate of any Australian university in 1883. Lauded philanthropist Janet Clarke (after whom one of the university’s Halls is named). Lesbian caricatures such as a feisty hockey enthusiast with an eye for intelligent ladies. Women who go on to study medicine in the more progressive USA or to work as Principal of leading schools. Throw in a few Vice-Chancellors, Provost’s, College chairs and various other interested parties(largely male), and you have a jolly pack readymade for historic storytelling. 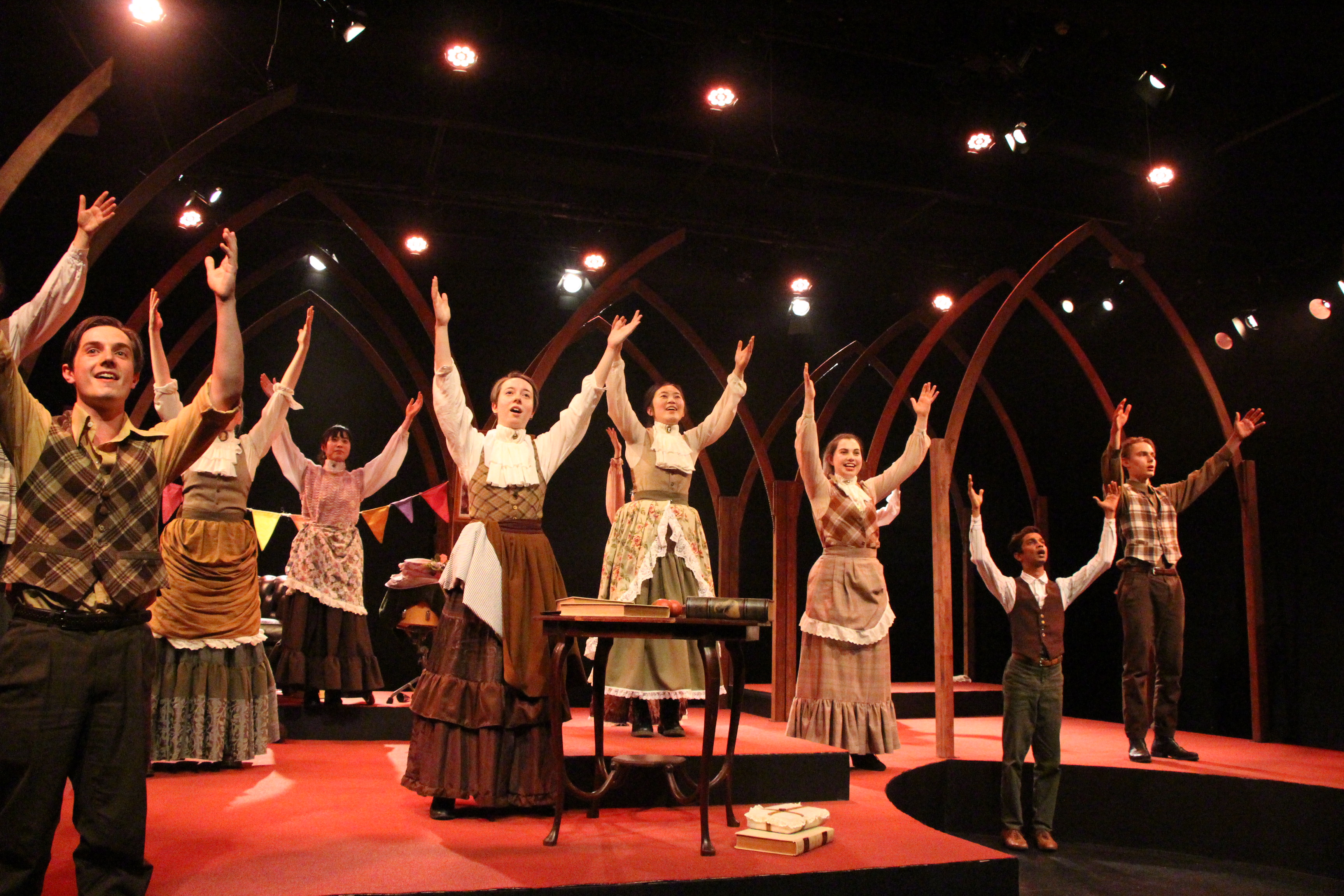 The lyrics and music, and energised delivery by the cast, take us diligently back to a time when such ideas were novel, also serving up tongue-in-cheek parodies of injustice and ignorance. J.K. Rowling even attracts mention. Gabrielle Lewis’ stunning set of timber Gothic arches spread across the entire space reference the famous sandstone quadrangles which still remain as part of the old University, here depicted open aired, without restriction, imagining the opportunity these flinty early applicants dreamed to call their own. Everyone loves a good period costume and the creations of Natalie Gillis shine in muted, middle class Victorian tones of taupe, fawn, brown, and beige, with demure stripes, heavy busts, and quiet ruffles, reflecting the bookishness of university engagement.

The overall movement design of Xanthe Beesley is fabulous, seeing the large cast of twelve animate and give life to scenes within the set. The choreography is excellent and employs gesture to tell silent stories impactfully, such as a visualisation of Bella’s graduation ceremony which brought a tear to my eye. A packed house, many alumni, were enthralled to get this potted history and told in such an elevating and fun way. The plot pokes fun at standard school boyish rituals, such as inter-College rivalry, public debates, private cigar smoking, social humiliation, and the absurdities of patriarchal prejudice. 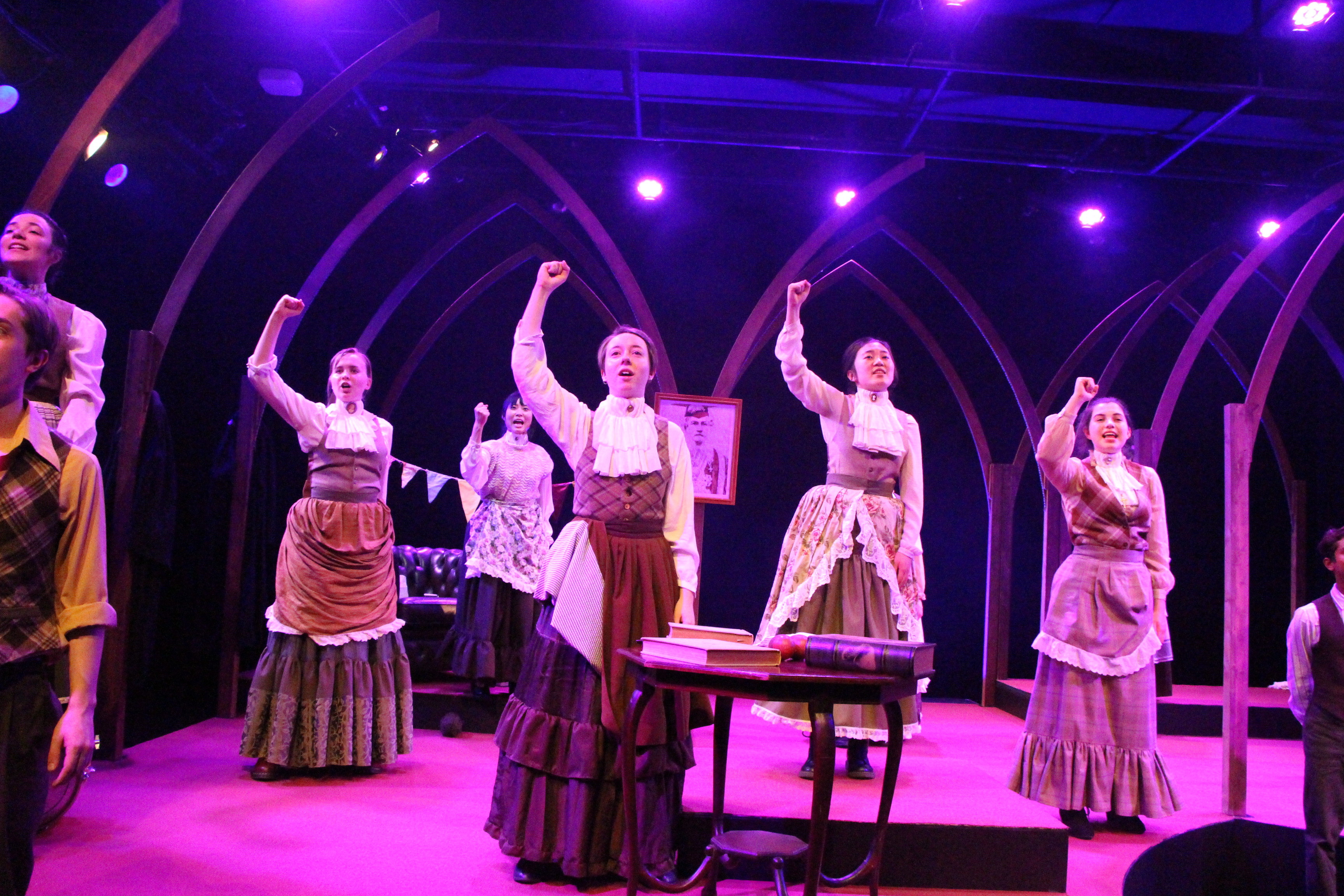 With a jaw-dropping list of successful past alumni, featuring some of Australia’s top theatrical talent, Union House Theatre runs a co- curricular program which supports students to be performers, playwrights, technicians, backstage crew, designers, directors, producers, choreographers, and more. Students can participate in a year round theatre and performance program at the University of Melbourne, offering plays, musicals, dance, comedy, masterclasses and events, across two performance venues in Union House, regardless of Faculty, or experience.

This production literally leaps out at the audience from the stage- the cast relish the setting, the topic, the songs and script, and present a coherent and strong ensemble. Being current students of the fabled Group Of Eight institution, only they can see the irony of exclusion which created so many hurdles for the Second Sex. It is so important we know this story, not long in our past, in order that we do not take for granted the rights women now enjoy in an accessible reality.With an Alumni Gala, pay what-you-feel and captioned/relaxed performance, this event catered to many viewers.

If you are a current UOM student and want to get involved in theatrical workshops, classes, or to volunteer to work on a production, check out their website here or speak with the theatre staff at level 1, Union House.

Disclosure: The Plus Ones were guests of Union House Theatre.