In a postmodern world, after two world wars, we are now caught up in the busy noise of the digital, the technical, and the experiential. Arts Festival’s need to wow and offer larger than life events. In Tom Creed and Barry McGovern’s Watt, an adaptation of a WWII novel by the great 20th century Irish writer expatriate, Samuel Beckett, we are transported to the striped back, impoverished, desperate and silent world of the itinerant male, wandering along railway platforms or sleeping in ditches, roving the backroads of country France, or in Beckett’s mind, rural Ireland. There’s more here than that, there’s humour, and despair, but it is in the way this performance speaks about humanity which compels, offering profundity.

The noise of mere entertainment dies down as we encounter a performance about the bareness of man in the struggle against eternity- and living itself. Watt says –  Life’s a joke. If you didn’t laugh, you’d die. You’ll die anyway.

As with all Beckett, the famed author of the play about a godless world, Waiting For Godot,  we are enchanted by the simple and pedestrian, which transform to become extraordinary, his plays a meditation on meaning, words, existence, and belief. Beckett’s leading characters are always versions of the Clown or Fool, a depressed meditation on man and his small activities, concerns and existential terrors whilst living, aka waiting for death. Existence appears interminable and time is counted like slow drops of water from an old, broken tap. No one arrives to intervene, to offer solace, or to provide meaning. 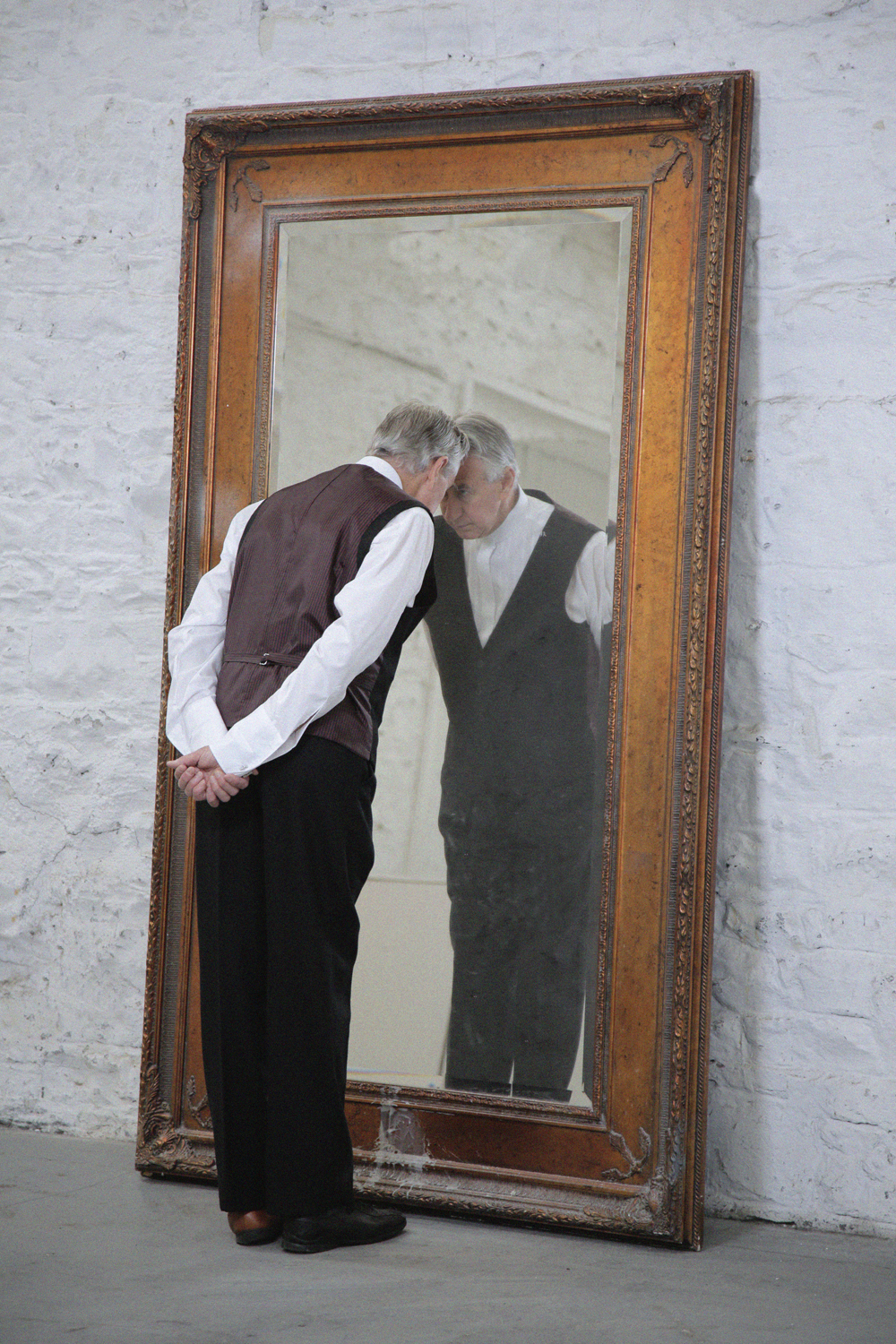 This work is adapted from a novel and the Director and Actor take what they wish to convey the often humorous aspects of this novel where not much happens. A manservant waits to meet a Master who never presents. He boards and disembarks from trains, arriving at rooming houses, observing other anonymous tenants, engaging with few, and changing locations, like a long term, homeless nomad.  A disheveled and dejected voyager of no fixed address, he appears in scraps of detail, as with his scraps of living. The novel was written whilst Becket and his partner lived in France and worked as members of the French Resistance during the Second World War and speaks of people displaced and nameless.

It takes greatness to present the bare, and McGovern, himself a well regarded screen actor, fills the stage with this quixotic creation of a man. His voice is superb, an auditory elixir that coaxes and cajoles the audience, mesmerising in its rhythm and timing, pitch and tone, combining like the waves of the ocean rushing into the shore of Beckett’s marvellous poetry, pebbles along the shore of insight. At times, McGovern moves speedily, like a skater picking up speed as he moves across ice,brining pace and grace, artfully crafting shapes through Beckett’s tongue-twisting phrases and pieces of writing.

Director Creed gives us many light moments which are cheeky funny and conversationally ironic. The laughs come both from the language as well as the characters and there are many beautiful vignettes recounted. Comments such as slips and trips of the tongue as well as alliterative monologues gift moments of levity and shock its speaker as much as its audience. Sinead McKenna’s set is beautifully bare and industrial and holds only one hatstand and one chair. The back wall of the theatre is exposed with it’s decaying paintwork, steel remnants, and corrugated surfaces with a gloomy and sickly grey-green lighting across the space.

The audience was packed with Beckett fans, lovers of the literary, and acting devotees. Huddled bodies, lovers of writing and the art of pure theatre to hear stories about being alive, we could be of any age -the ideas are timeless. Go along to taste the work of the one of the best stage writers ever to have lived, presented by a man honed in the craft and cut of Beckett’s cloth.

Check out the entire program for the October 3-21 Melbourne International Arts Festival.

Disclosure: The Plus Ones were invited guests of TS Publicity/Melbourne International Arts Festival.