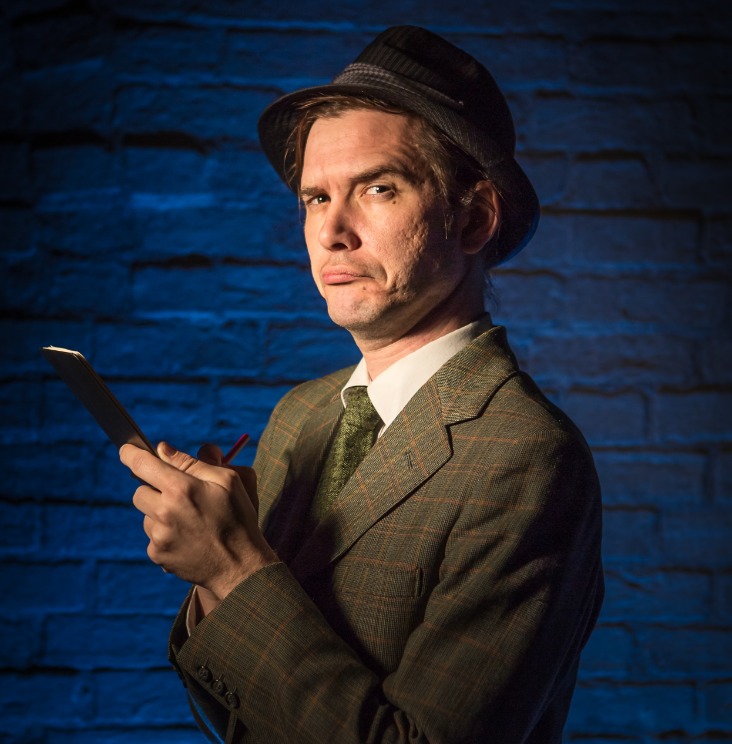 Murder Village. The name is ominous, yet it is the perfect tongue-in-cheek setting for a genius hybrid between a murder mystery and a professional long form improvised format. Creator David Massingham, starring as a seemingly incompetent Detective Gullet, teams up with Amberly Cull as the elderly and morbid sleuth Ms. Marmalade, to bring about a unique experience currently drawing full crowds at the festival thus far.

By taking a survey of the names of four chosen inhabitants of the town, the audience gets to set in place who meets their demise each night, and who is responsible. Thus begins some long-form improvised interactions as the performers set into place relationships, possible motivators, and red herrings, all in a bid to help Ms. Marmalade ascertain, (as the only cast member with no knowledge of the audience ballot), what has happened, and who is to blame.

While the mystery of the events is fun to piece together as an audience member, it is the characters and the strength of the improvised encounters that really makes the experience shine. Of the town’s dwindling population, the four suspects chosen for the opening night included the head of the social committee, a drunken doctor, a happy-go-lucky butcher, and a jam enthusiast, (played respectively by Sophie Kneebone, Lliam Amor, Jason Geary, and Louise Fitzhardinge). With such a strong line-up of improvisational talent on the night, and throughout the season, the connections are masterfully built upon with proficient listening and acceptance, concrete character reactions, and a sense of mischief when required – one that does not overwhelm the reality of the caricatures portrayed.

Massingham’s solid grip on the procedural nature of the format keeps the pace and connections flowing to a beat, without ever being as heavy-handed as some longer form direction can border on. For a world made up with only costumes, mime, and character know-how, there is a definite sense of immersion that integrates well into achieving satisfaction within the made-up narrative. Combine this with a sense of fun that plays out with a unique magic that is only capable when a performer is given scope to surprise themselves, then you have an improvised and refreshing improvised experience that certainly hits all the marks.

Murder Village runs during the Melbourne Fringe Festival from the 14th to the 21st of September, (no show Monday), at 6:30pm, at The Fringe Hub: Arts House – Studio 1.

Disclosure: The Plus Ones were invited guests of Murder Village.

‘Montreal’ by Paul Richards at the Melbourne Fringe Festival