In Stratford, on the river Avon, three hours east into Gippsland, an annual cultural offering of all things Shakespearean  casts a magic spell in Shakespeare On The River Festival. This regional event has created an enduring arts legacy for the town that showcases community and professional theatre as well as the broader arts scene and is a brilliantly organised delight that wraps you in the palm of its hand. Since 1991 the Festival has grown to include over 20 different events performed across two and a half weeks.

A combination of local theatre companies and primary schools, and guest professionals concentrate on the Shakespearean theme and literary texts, taking their audiences on a trip both into the world of theatre and back to the English renaissance. It was like stepping back in time but also into a mythical Shakespearean terrain-where the everyday is flipped into the theatrical space of all that is Will: the stage, the man, the characters, the stories, the lessons, and the lines! Imagination and dreaming filtered through the town just like the Avon river’s waters rimmed its edges. 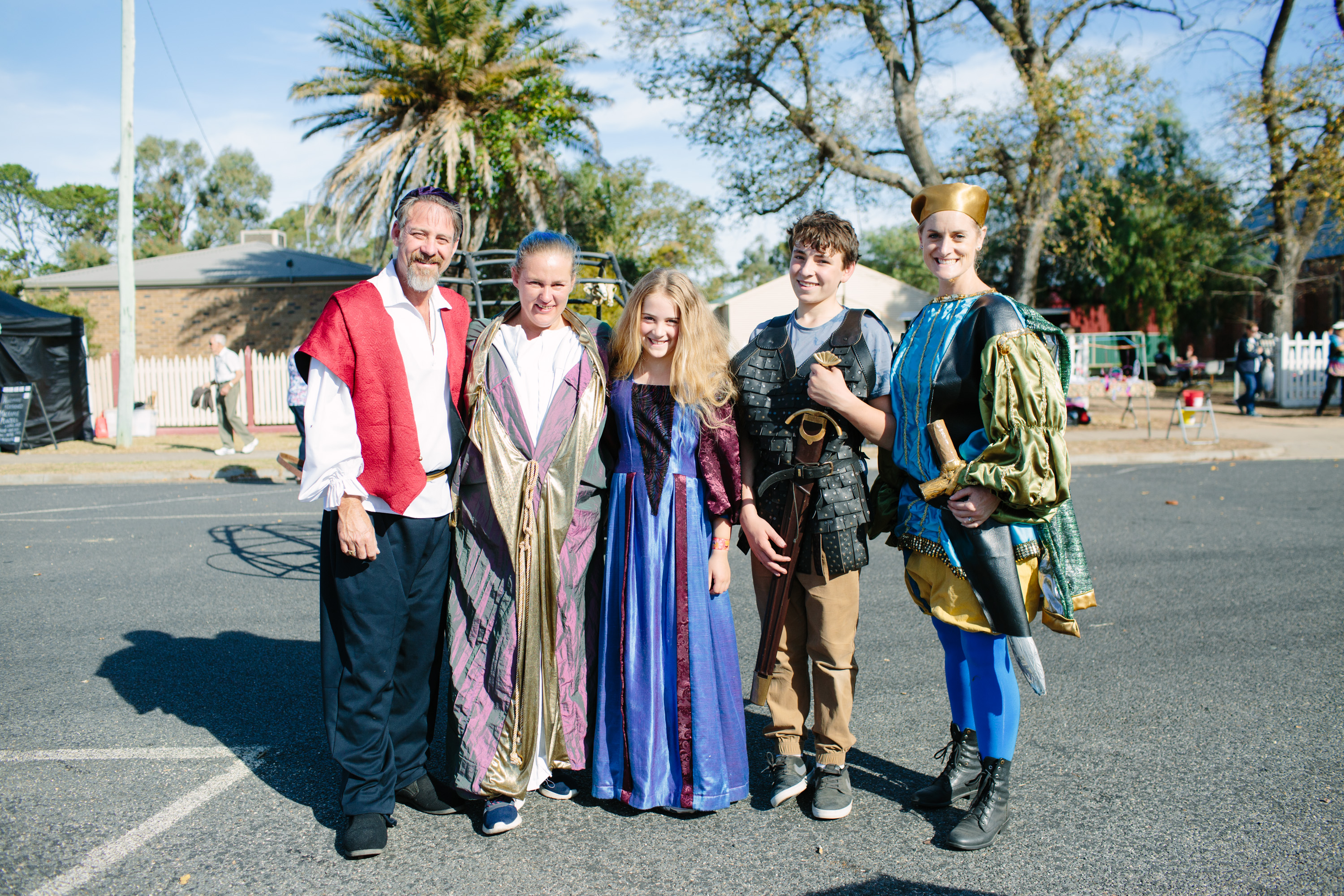 Shakespeare was a country man. Though he lived and worked most of his professional life in the urban chaos of London, as well as the rarefied atmosphere of court, he refers time and time again to the small town he grew up in, his home county of Warwickshire, and to the rural mythologies of Olde Englande. Something of this all encompassing magical feel envelopes you in Victoria’s Stratford.

The 23 April, the assigned birth date of the Bard, is set aside for an all ages medieval Birthday Party in the Park, followed up later with events such as The Bard’s Banquet: Under The Sea, a night of dress up and entertainment over food and wine in their beautifully restored historic Mechanics Hall. A vocal nosh and evensong ecumenical service at a local church offer opportunities to sing medieval. 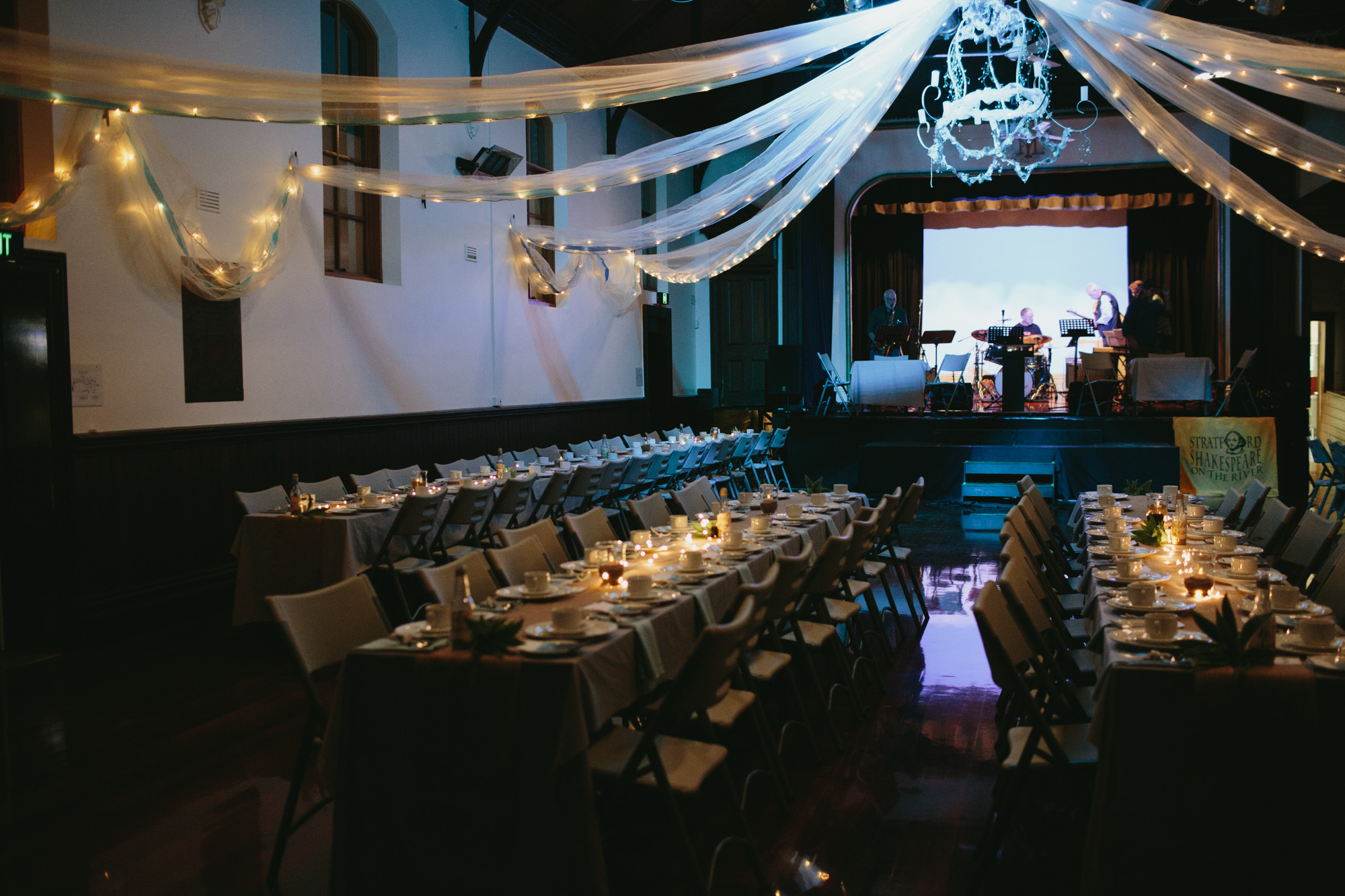 Under The Sea, The Bard’s Banquet

This small town is big enough to wander through and has delightful murals revealing its prioritisation of the arts. This highlight of the year’s calendar in this regional setting is a time where the entire community unites, with people from across a range of disciplines working cooperatively to make this event hum. Stratford hosts a permanent The Stratford Courthouse Theatre, under the committed direction of Gavin and Anna Roberts, which hosts touring shows as well as their own acting classes for young children, performing arts internships, and the legendary Groundwork Youth Theatre, who performed The Comedy of Errors. A writing competition is also part of the Festival, Sheila Malady Short Story Competition.

The Community Players 2018 work was an energetic traditional presentation of The Tempest, one of the Bard’s last plays, with artistic costume design by arts costumier Claire Flack. Her vivid designs heightened our understanding of the characters and content, with lashes of colour and period styling making them works of art themselves. Imaginative detail such as Prospero’s gold magic wand, the three-person  ivy headdresses of The Ariels, and Caliban’s vivid peasant island attire deepened our experience. Some directorial twists brought the play into a contemporary space…with cheeky Shakespearean clowning from Trinculo and Stephano playing teen pranksters. You had to watch yourself beside them!

A Tempest-inspired art exhibition at the warm and welcoming art gallery and Segue Cafe, a home for artisanal crafting, next door enhanced the Festival, as did a cute Wits’ End bar. Melbourne companies, Soothplayers and 24 Carrot Productions, toured their Completely Improvised Shakespeare, and Shakespeare In Therapy, the afterlife therapy group for characters traumatised by their playwright, a very 20th century adaptation, to audience bemusement and delight. In a circle of plastic chairs in an community centre, we got to see and feel his tragic greats as living breathing personas with psychological demons! Sparks fly when Ophelia gives lip, Desdemona and Othello split for PTSD/DV treatment, Katerina refinds her voice, and Romeo plays the group himbo. 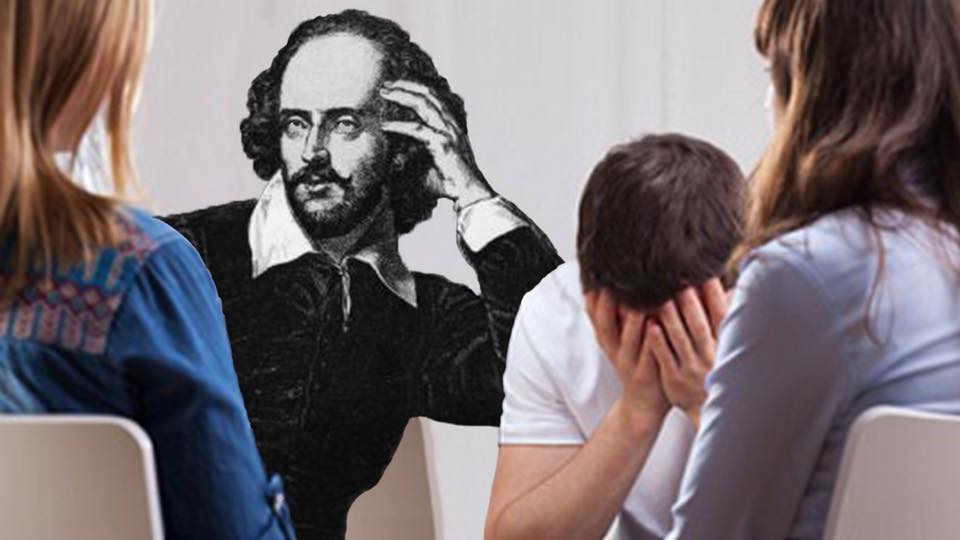 A unique highlight of this Festival each year is the Stratford Primary Schools Grade 6 Production of Romeo and Juliet, this year combining state and Catholic schools, with the timber-roofed local Mechanic’s Hall as the Capulet’s mansion. The Hall evokes memories of Stratford, England’s, Grammar School, the start of Will’s education in language and formal literature, and local trades halls where his townspeople met, including his father who became Mayor. Though separated my thousands of miles of ocean, this Festival brings many reminders of what keeps us all intimately connected as human beings, from the source Stratford, to further exemplars.

Claire Flack’s beautiful costumes were vibrantly authentic, aiding the children’s insight into their characters’ social class and story, with entrancing masks by Liz Magnusen, and set design involving candle light, drapery, procession, and frieze, fully enticing the children into a medieval and performative mindset. A longstanding drama teacher of young people in the region, Rachael Nicholls’ impassioned direction embraced her student’s capacity to play the Bard, a community expectation, and this group did not disappoint. 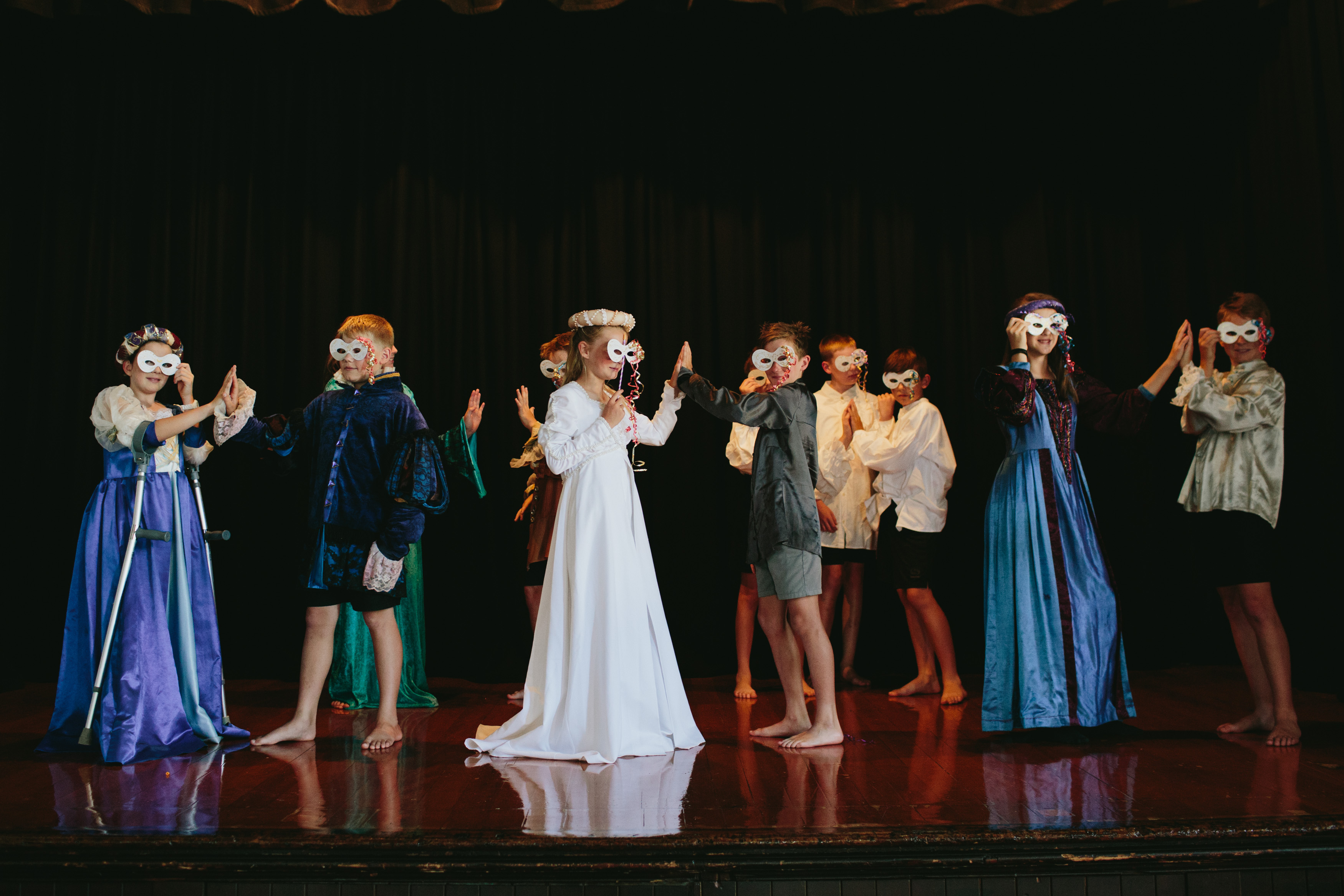 Like the boy players of London’s early 1600s, these 35 little eyases (small hawks, as Rosencrantz tells Hamlet) uncovers the magic of community storytelling just as did the traveling players of Shakespeare’s own childhood with their Mystery cycles, mummers, street revelry and performance, such as Morris dancing. A range of experienced and newcomer children trod the boards as true professionals. The cast diction and delivery was the equal of any adult company across the land, at times, superior.  Confident Meaghan Webster comically hosted as the Bard. Though Romeo had to learn 90 lines, the confident Hamish Macgregor bounded about as if born to tread the boards of the very Globe, and had an equal capable to his skill in Juliet, by honey-tongued Trista Leighton. The work of these children gives lie to the myth that only skilled thespians can speak Shakespeare, and their clarion voices rendered an innocent charm to a serious and ancient parable about enmity. 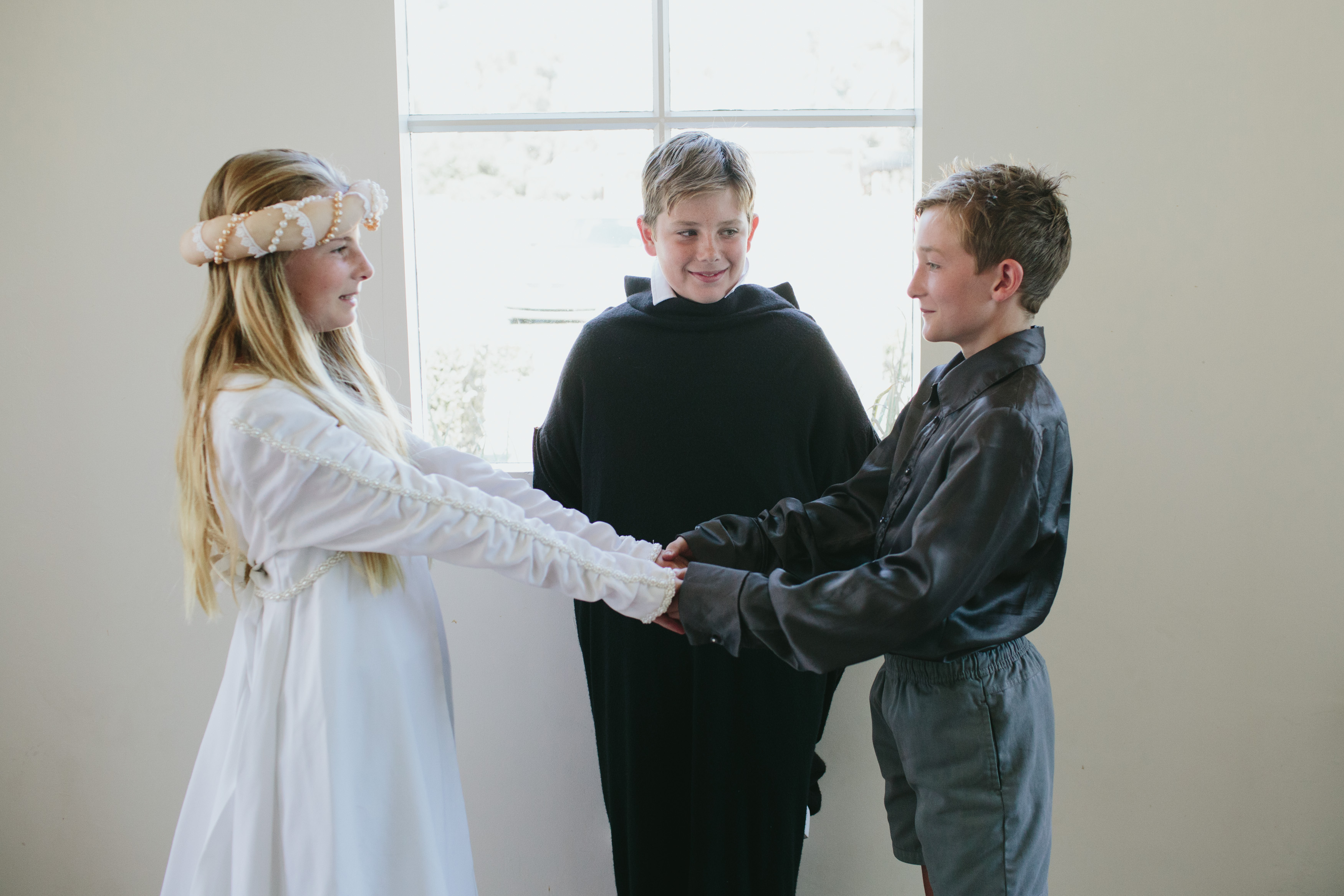 Trista Leighton as Juliet, Hamish Macgregor as Romeo, with The Friar

The closing event occurred on a sunlit Sunday, the Medieval Faire Day & Makers Market, including maypole dancing, roving costumed street performers, local stalls and demonstrations, busking, and stage performances. Food vans and a live music stage made this a vibrant event running across many places inside the town and gave good smells, fun times, and great moments for engagement. The original Methodist Chapel, now a town history museum, opened to show it’s memorabilia, original farming equipment, and local lacemakers worked their intricate labour, recounting the history of cottage work, payment and the effects of later industralisation on small time production.

The magic of all this is that, like the Shaxpere’s of 1589, or any town filled with families today, community holds people together. Art, storytelling, music, and play unite people across all ages and social classes, just as they did in the medieval times. To share their humanity and experience fully what it means to be part of a ‘village’. Stratford, here,  is an exemplar of the first order and offers a cup full to overflowing down the decades through their marvelous jewel of a regional arts festival, the toast of many towns who’d wish to do it so well. 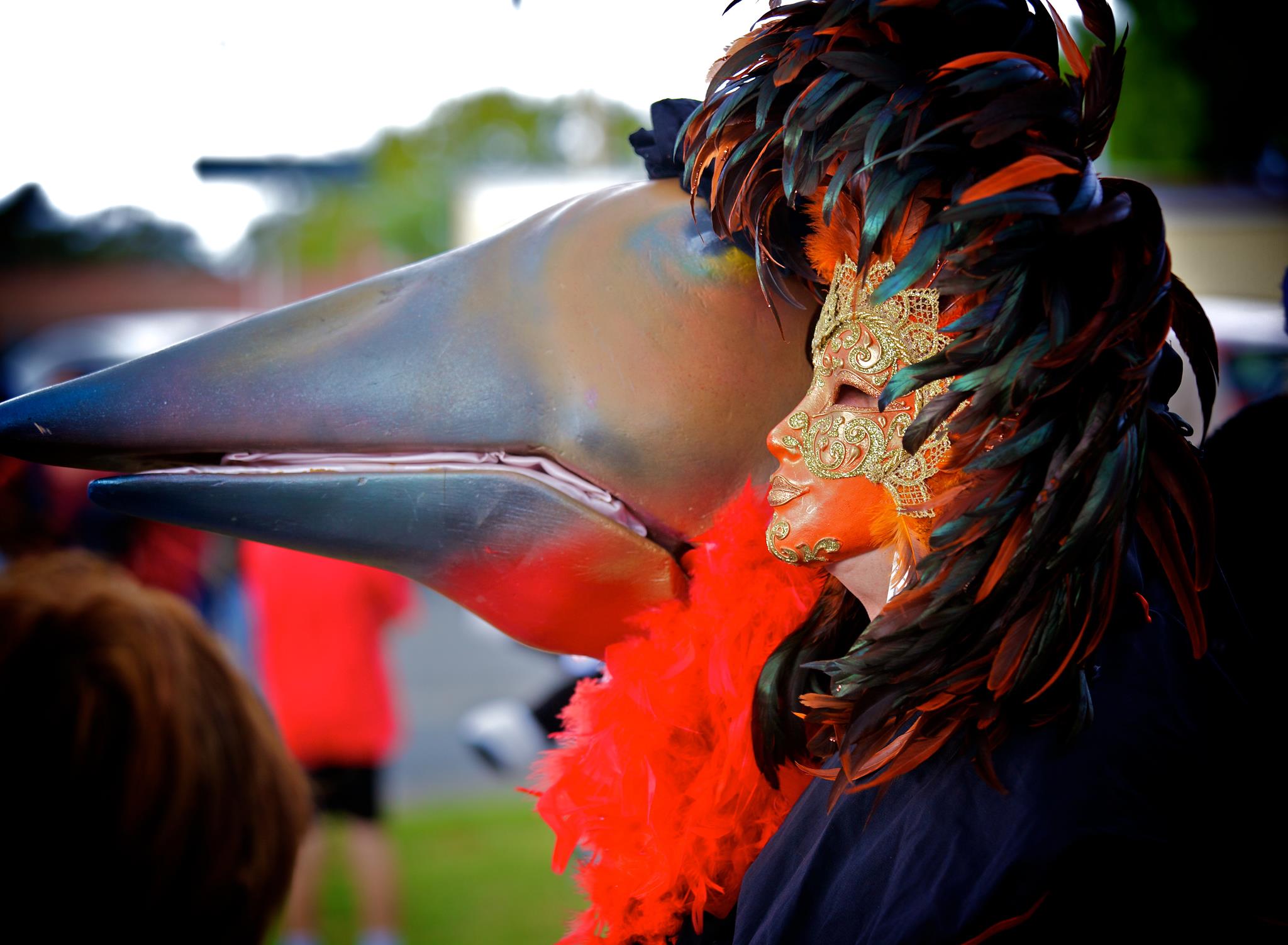 On a late night walk home, I stumbled across the window of indepth3Dprinters, which displayed 3D plastic versions of Yorick’s skull, Bill’s head, and a mini Globe Theatre. Needless to say, one Globe made it in my backpack to Melbourne.

Sarah Wallace is a dance-trained Theatre Specialist with a flair for the bold, and non-traditional performance platforms. On the street, or in the box seat, she looks for quality , works that push the envelope.

Disclosure: The Plus Ones were guests of The Stratford Shakespeare Festival Committee.

The Three Deaths of Ebony Black at The Butterfly Club