Combining a little bit of history, a healthy dose of experimentation, and lots of tasty beer, Clay Time at The Craft event proved a cracking start to my 2017 Good Beer Week experience.

The event saw Collingwood’s Craft & Co. — a multi-faceted venue that brews its own beer, distills its own spirits, makes its own cheese and charcuterie, and even has an off-site farm and vineyard — craft Australia’s first-ever amphora beer. The brew was aged in a huge clay vessel, as was favoured in eras past.

But before we got to taste the history-making drop, there were plenty of other Craft & Co. creations to experience, beginning with a riff on the Sbagliato cocktail. Here, it was crafted with Campari, prosecco, and a distilled version of the venue’s own red IPA beer.

Then kicked off the feasting, with Craft & Co. showing off serious flair for all things house-made. We sampled a crisp pilsner and a U.S.-style pale ale, both fresh from the microbrewery downstairs, while grazing our way through platters of the venue’s own charcuterie creations. Then, sitting alongside fat chicken weisswurst and braised leeks, crispy roast potatoes, and chicken schnitzels crumbed cleverly in spent brewery grain, it was time for the main event. 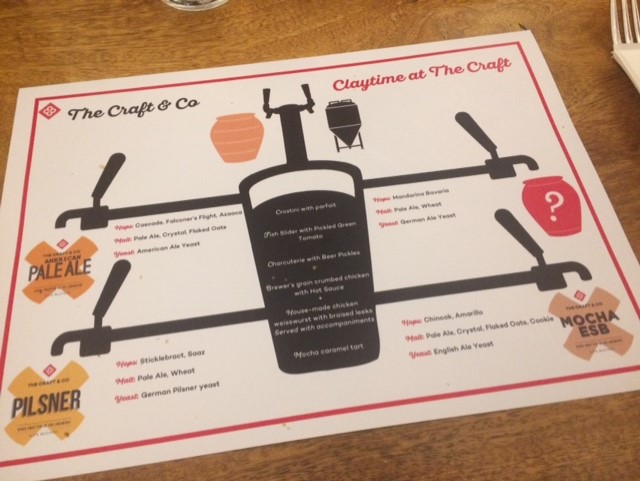 As the brewer talked us through his foray into this old-school style of brewing, we were given samples of two identical beers and asked to guess which had been aged in amphora, and which had finished its brewing process in the usual stainless steel. As most agreed, the amphora brew came out on top, winning the big points for its complexity.

Of course, since it wouldn’t be a proper beer feast without some clever dessert and beer pairing, the evening finished off on a sweet note – a dreamy mocha caramel tart, paired with a rich, mocha ESB, and another of Craft & Co.’s house-distilled brews.

Anyone wanting to try the amphora beer themselves will find it gracing the taps at GABS Festival, held at Carlton’s Royal Exhibition Building this weekend.

Disclosure: The Plus Ones were invited guests of Soda Communications.
Image credit: Good Beer Week, The Plus Ones.