Voted to be the most popular opera of all time, Puccini’s Madama Butterfly has hit the Opera House in a style and on a scale as never before. Director Graeme Murphy’s contemporary take on the timeless classic marries stunning vocals with magical choreography and ingenious film to showcase Opera Australia’s talented artists.

Set in the early 1900s, Pinkerton, a U.S. Navy Lieutenant has come to Japan and finds himself enchanted with a local girl, Cio-Cio-San, whom he nicknames Butterfly. An opportunistic marriage broker offers the carefree captain a bargain on a house-servant-bride package and so Pinkerton and Butterfly marry. However, even on the wedding day Pinkerton admits to his friend that he plans to one day take a “true” American bride. Butterfly, on the other hand, is blissfully unaware, and in the purity of her devotion to her American groom she willingly suffers the rejection of her family and even abandons her traditional faith, throwing away the idols of her ancestors’ spirits and turning to the American God. Soon after marrying, Pinkerton leaves with his ship to the States and is gone for much longer than Butterfly anticipates. Her friends try to tell her that she has been deserted and that she should consider marrying again, but she refuses to listen and remains fiercely loyal. Even when she reaches the point of poverty, she feels no temptation to marry one of her many rich suitors, but clings onto the hope of a reunion with her husband. When Pinkerton’s ship eventually does return, however, he does not come alone and finds Butterfly also has news to share. 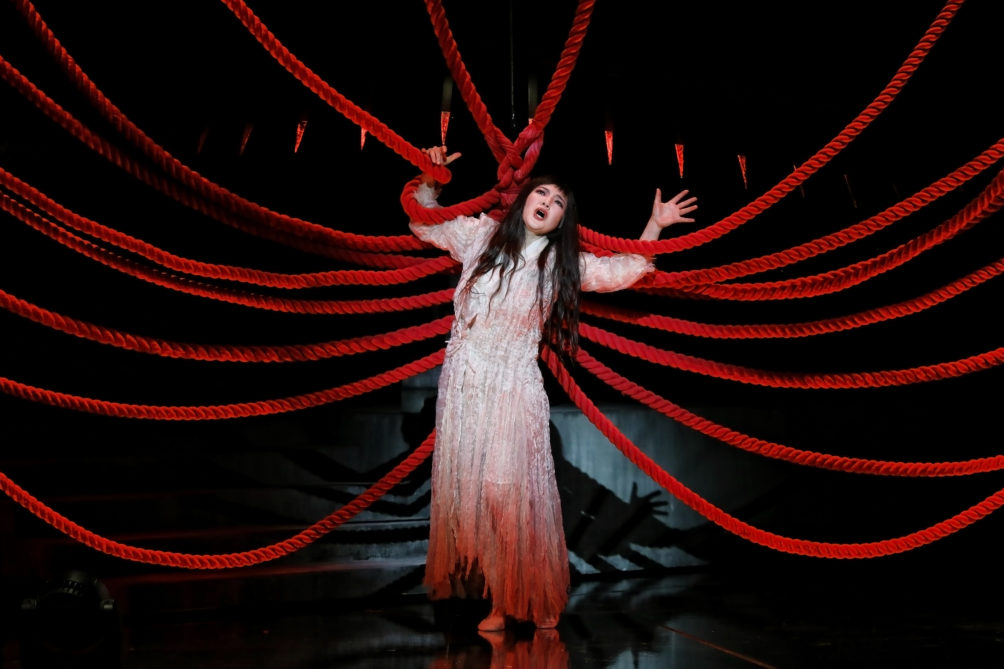 Madama Butterfly features some of the best known arias in the opera world. ‘Un bel dì vedremo’ is the aria that every soprano dreams of singing, which Butterfly sings as she awaits her husband’s return, full of hopes and illusions. There are also some delightful duets, such as the delicious musical foreplay between Butterfly and Pinkerton on their wedding night, and the mournfully felicitous, bitter-sweet little number Butterfly and her friend-servant Suzuki sing as they scatter petals around to welcome home the much missed Pinkerton. The score – full of big, sweeping melodies, as was Puccini’s want – is a real Japanese-American fusion, the oriental sounding pentatonic scale and the Japanese bells and tam-tams in the orchestra, interwoven with the unmissable strains of ‘The Star Spangled Banner’.

This new production is impressive and moving, although not as exquisitely beautiful as Moffatt Oxenbould’s production which Opera Australia farewelled in 2015. The physical set is much simpler than Oxenbould’s exotic and evocative mystery world of wood/water/silk/fire, consisting mainly of just a central raised glass platform. There is no onstage lake and no starry firmament. The costumes also are not as gorgeous and are slightly confused timewise – on the one hand there are traditional kimonos and large paper fans, and on the other, black leather skirt suits and patent Louboutins. There are even a couple of characters who look like they’ve stepped off the set of Mad Max or The Hunger Games. I suppose though that this is to bridge the gap between the traditional and the modern, because the real master stroke of this production is the brilliant use of video. 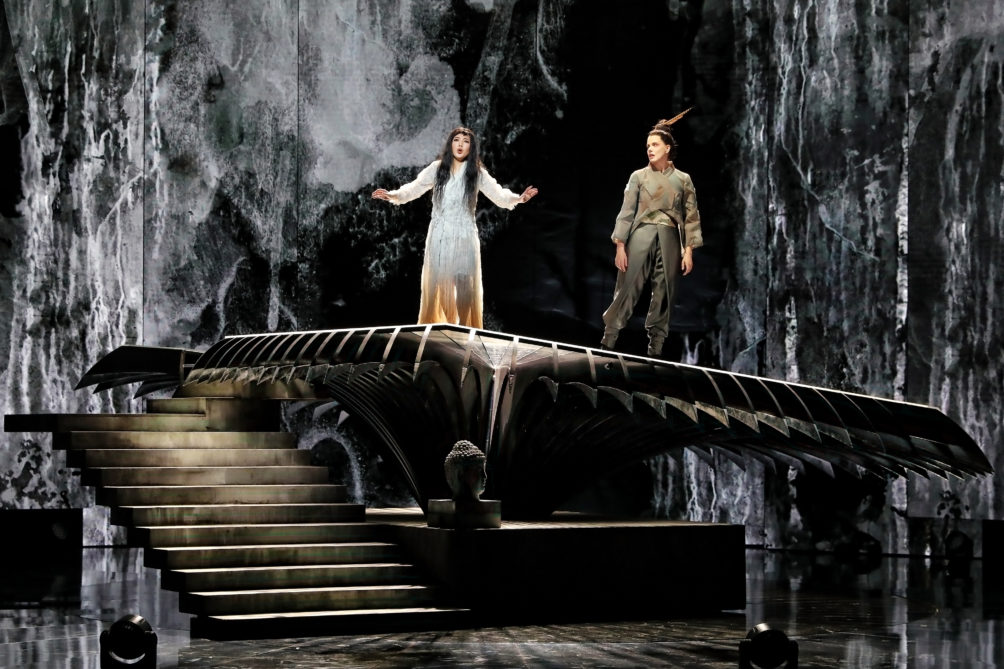 The soaring, cinema-sized HD LED screens which took our breath away in Aida last year are superbly utilised again in this contemporary production. Damien Cooper’s projected video visuals are without doubt works of modern art, and the ingenious way in which they interact with the on-stage action makes them part of the physical set. Favourite moments include when filmed servants pass actual drinks to onstage servants and when bright pink spray paint shoots onto the screens from a can in the performers’ hands, creating larger than life wall art. Beyond having a knock-out-punch impact, the videography can also be breathtakingly beautiful, sensitive and moving, as in the first physical encounter of Butterfly and Pinkerton on their wedding night, which is touchingly and tastefully portrayed by filmed dancers.

The stellar cast really does Puccini’s work justice. Celebrated South Korean soprano Karah Son, who made her Australian debut as Butterfly at the Capitol Theatre in 2015 in Oxenbould’s production, returns along with her maid-servant Suzuki from the same production, Sian Sharp. Both Son’s singing and acting are finely executed and moving. Her vocals are clean and even, reminiscent of a flute. Andeka Gorrotxategi takes on the most hated role in all of opera, that of Pinkerton, and earns his boos from the audience with a secure tenor and a swaggering yankee presence. Sharp is notable as Suzuki, bringing some pleasing harmonies to her memorable duet with Butterfly. The lithe little ballerina Teagan Lowe pads around as effortlessly as a kitten and flits around as free as a butterfly, visually capturing Cio Cio San’s elegance and beauty, as Son does vocally. All the rest of the cast, as well as The Opera Australia Chorus and Opera Australia Orchestra, perform to their usual high standard. 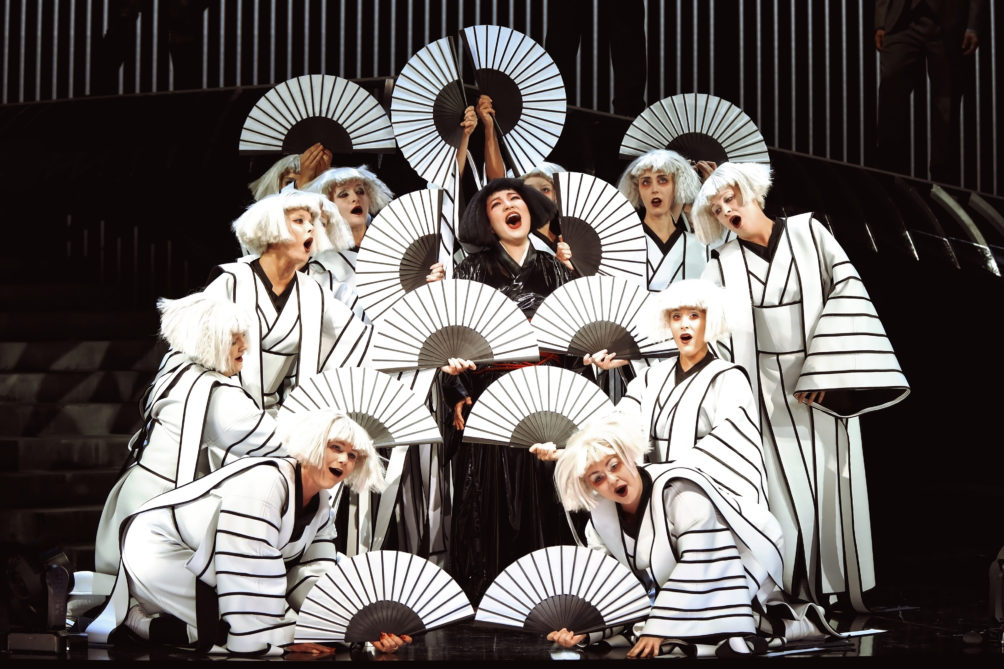 Madama Butterfly truly is an unforgettable experience for opera first-timers and aficionados alike, and this production with its digital wonder is not one to be missed. Especially if you didn’t catch Aida, you won’t want to miss this chance to see Opera Australia’s biggest investment in a long stretch and what is shaping up to be the way of the future for opera.

Disclaimer: The Plus Ones were invited guests of Opera Australia.
Image credit: Prudence Upton.

Sydney Homeless Connect – Wrap the Homeless in Warmth this Winter

How to Transform Your Living Room this Summer