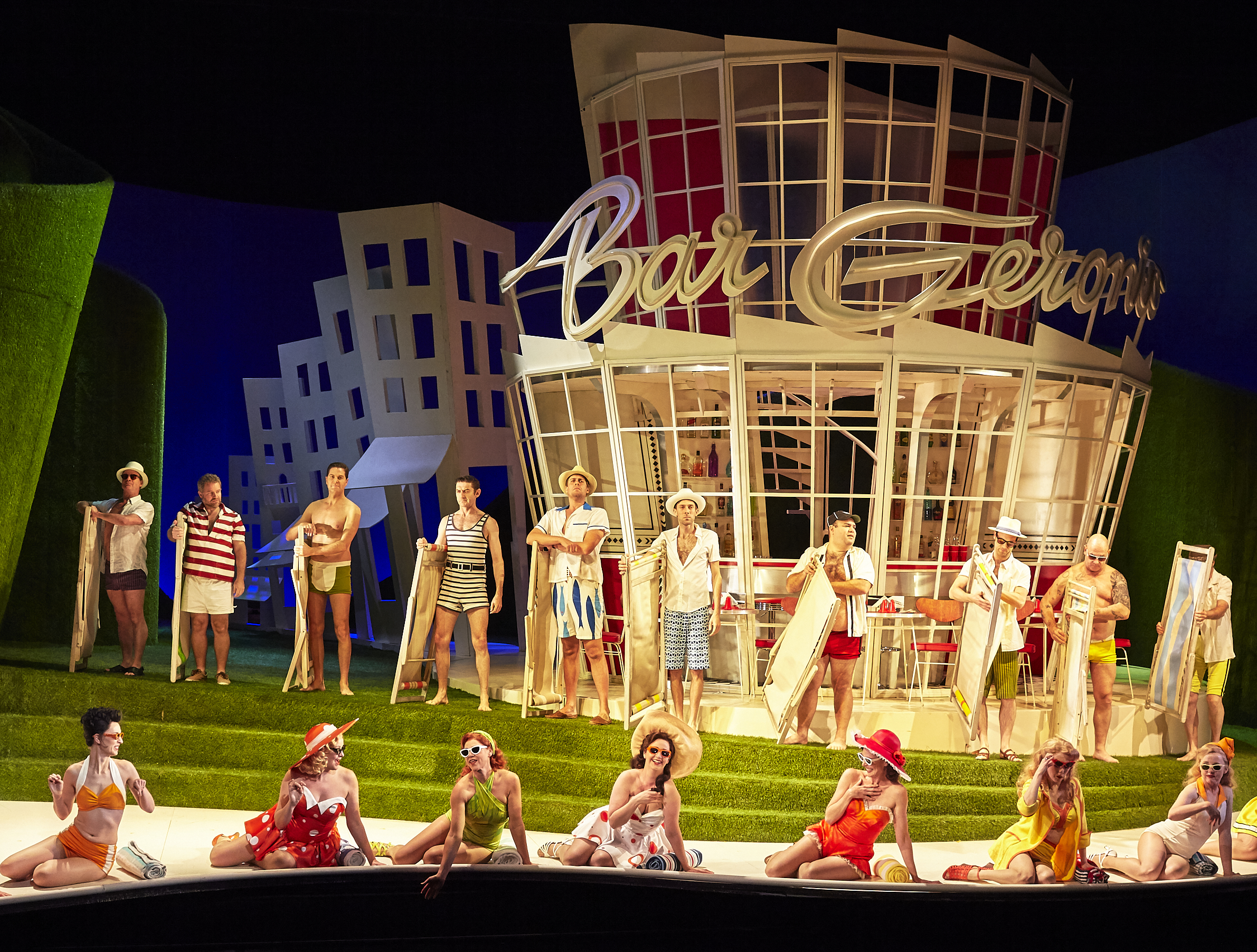 The Turk in Italy is not one of Rossini’s best known or best received operas, but this risqué OA production is sure to entertain most. (Just don’t take your kids or your prudish mother-in-law.)

Director Simon Philips premiered this playful retro adaptation in 2014 and returns this year with the same cartoonish set design and candied costumes, as well as much of the original cast.

The plot is by no means serious drama and does not stand up to critical examination. But it is laugh-out-loud funny. This is opera buffa, after all. It is meant to be ridiculous, and is by its’ very nature full of gender and race stereotypes, with not one fully formed, complex character.

Luckless “nong” of a husband Geronio is twisted around the little finger of younger “nympho minx” wife Fiorilla. Her fresh-off-the-boat foreign lover, Selim, shafts his devoted girlfriend, Zaida, in a pit to buy Fiorilla off Geronio. All the while, the bartender-cum-poet, Prosdocimo, uses the two couples’ relationship chaos as inspiration for a play he is writing.

Helpmann award winning baritone Warwick Fyfe is adorably, laughably pitiable, bumbling around in his fatsuit as Geronio. The pace, power and clear articulation of his patter singing is impressive, especially in the middle of active battle. Bass-baritone Paolo Bordogna is an appropriate choice as the swarthy, oily Selim. Both lead males are genuinely hilarious. Baritone Samuel Dundas as the poet Prosdocimo sings with aplomb. Mezzo-soprano Anna Dowsley is a bit shy compared to some of the other performers, although this does suit her character of the underappreciated Zaida. Her vocals are refined and pristine.

Rising Australian soprano Stacey Alleaume, who dazzled audiences in The Merry Widow earlier this year, is the only one of the central performers new to her role as Fiorilla. Her vocals are clean and powerful, with creative coloratura, secure even in the sections most difficult to perform. She seems to relish the chance to be the incorrigible coquette and is quite the actress, leaving every woman in the audience saying, “I’ll have what she’s having.”

The chorus sings wonderfully throughout and plays an important role in the comedy. The opening scene is particularly well directed. The chorus members, both male and female, parade in their 1950s swimsuits and set themselves up to tan by the beach. Remember that these are singers, not dancers, so the diversity in physiques itself is comical.

If the first glimpse of designer Gabriela Tylesova’s gelato-coloured, Happy Days-style set does not turn the notion of stuffy, high-brow opera on its’ head, certainly the first few lines of Simon Phillips’ decidedly modern Aussie translation of the libretto in the surtitles will. The obscene innuendo of the vernacular matches the overtly sexual carry-on in the choreography. The whole thing comes off as a tad Austin Powers, and if you are expecting class rather than crass, a sophisticated night appreciating high art, you may be disappointed.

However, when you consider that Rossini’s operas were the pop music of the day back in the early 1800s, we really must measure them against the standards of today’s music videos, which basically follow the recipe of “add sex and stir”. This opera, wholly centred on open extramarital affairs, was originally criticised and censured for “challenging healthy moral precepts.” I would venture to say that to this day, in Philips’ updated production, it continues to raise an eyebrow, at the least.

Having said all that, Rossini’s score is melodic, reminiscent of Mozart, and most definitely serious, sophisticated art. It is precisely the contrast between what we hear and what we see that makes this production funny. This may be the only time you will see Elvis Presly and Marilyn Monroe singing opera. It’s certainly the first time I’ve heard opera coming out of a jukebox. 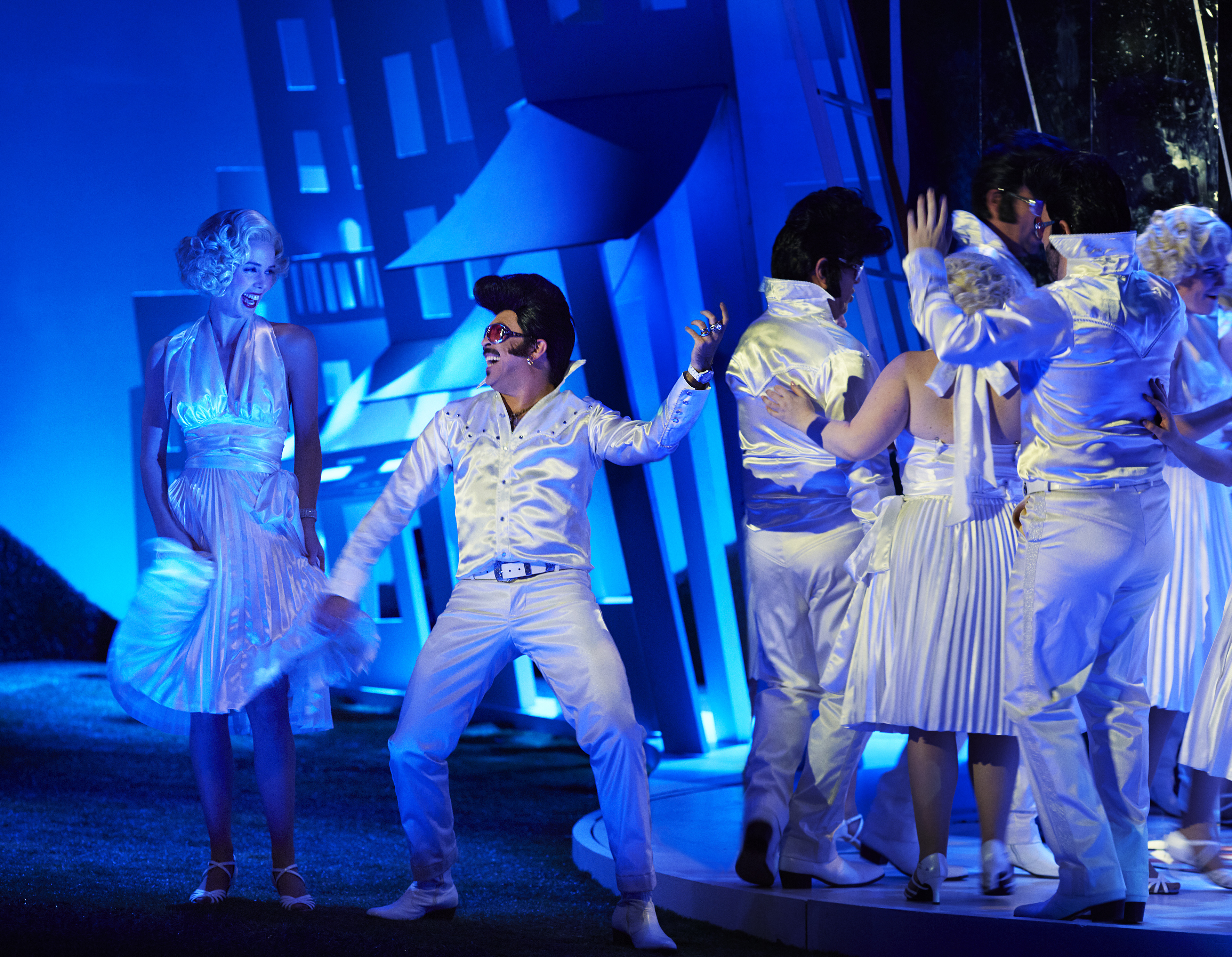 Rossini’s The Turk in Italy is playing at the Joan Sutherland Theatre, Sydney Opera House, until 1st September.