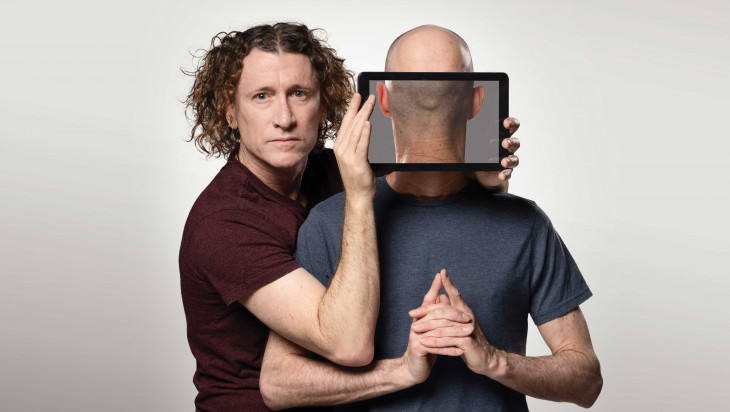 The Umbilical Brothers have been an unstoppable force in physical comedy since becoming an Australian household name in the 90’s. With their regular appearances on Good News Week and Rove, they delighted the imaginations of viewers across the nation through a unique blend of mime, vocal FX, slapstick and puppetry.

In The Distraction, The Umbilical Brothers break from their less-is-more approach, and bring together a chaotic mix of stage and screen….and lots of babies….BIG BABIES. AAaahhh!

With our lives morphing further into the screens of digital devices, the duo take us on a tongue-in-cheek exploration of the modern human experience. This is achieved through holding up a digital mirror to themselves, and in turn the audience.

The world they construct is built through two opposite green screens, which feed into a giant screen centre stage, and a camera that points candidly at the audience. In this world, seemingly-simple props, like a plastic baby doll, become Godzilla-like monsters, hellbent on destroying humanity. The genius is you never quite know where to look, and as the journey ventures further into the gloriously ridiculous, heads turn faster than trackside at the GP.

While the show flirts with the darker-sides of our addictions to the screen, it is ultimately an extremely funny hour-of-power, evident of the decades of experience behind these two masters of comedy.

The Distraction is showing at The Forum nightly until Sunday 17 April.

You can often spot Brenton in the wild at Revolver. Sometimes he ventures as far as the theatre for cultural nourishment before disappearing back into the dark.

Wheelchair access can be arranged upon arrival but venue staff will need to assist (eg. placing ramps)

Disclosure: The Plus Ones were invited guests of MAD PR