After a string of postponed parties due to the pandemic, Melbourne’s favorite celebration of house music hit back in a big way with Reminisce Carnivàle, held last weekend at Melbourne Showgrounds.

The Reminisce concept had backyard beginnings in Frankston some 10 years ago. A small get together amongst close friends with an idea to choose their favourite house tracks. The concept progressed to a club, and then into some of Melbourne’s best venues, before its current form as the nations biggest countdown of the top 50 house tunes, as voted by you! 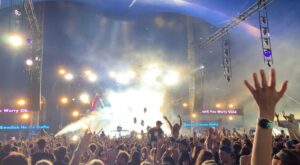 The countdown is brought to life by none other than the main man himself, John Course, affectionately known to us as Coursey. The atmosphere is electric, and it erupts as we get down to single digits. Both my plus one and I sang along to every word, with our hands fist-bumping the air for the majority of Coursey’s set.

When you have been on dancefloors for over two decades, you get to appreciate the fine details put into a party – this crew got it bang on.  Hosted in the biggest circus tent ever seen at Flemington, everything from the sound to the staging was designed to blow your mind. Not a minute went by that the stage wasn’t filled with acrobats, aerial hoop artists, dancers and creatures of all kinds who also crept out amongst the crowd.

A little word of advice from this seasoned party professional, if you can afford it, always fork out the extra $$ for VIP passes. The private area was an oasis of lounge chairs, greenery, a private bar and an abundance of toilets – all this alongside a sweeping platform with the best views of the stage. Props to industry legends Angie Young from Xposed Media and Hardware Group for the exclusive VIP tickets.

If you like what you have heard, you are in luck, because Reminisce will be back on Saturday 19 March at Sidney Myer Music Bowl, celebrating 10 Years of Reminisce. Armand Van Helden is set to headline the event. Over Reminisce’s 10 years, Armand’s tracks have featured a huge 21 times during the favourite Top 50 countdown. Armand’s most loved tracks include: ‘You Don’t Know Me,’ ‘I Want Your Soul,’ ‘My, My, My,’ ‘Bonkers’ and of course Duck Sauce favourites: ‘Barbra Streisand’ & ‘aNYway.’ 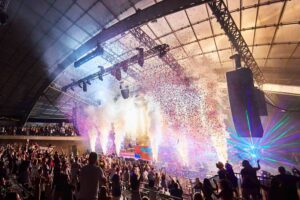 To celebrate the launch, Reminisce are giving away a chance to win The Ultimate Reminisce VIP Weekend to those who register for Early Access to tickets. There are also 5 x Stalls tickets to be given away as second tier prizes. 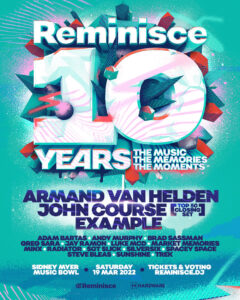 is The Plus Ones resident party animal, you can find him regularly climbing the cage at Revs.

Disclosure: The Plus Ones were invited guests of Xposed Media

Treat yourself with Damselfly

A Spirited Night at the Australian Distilled Spirits Awards