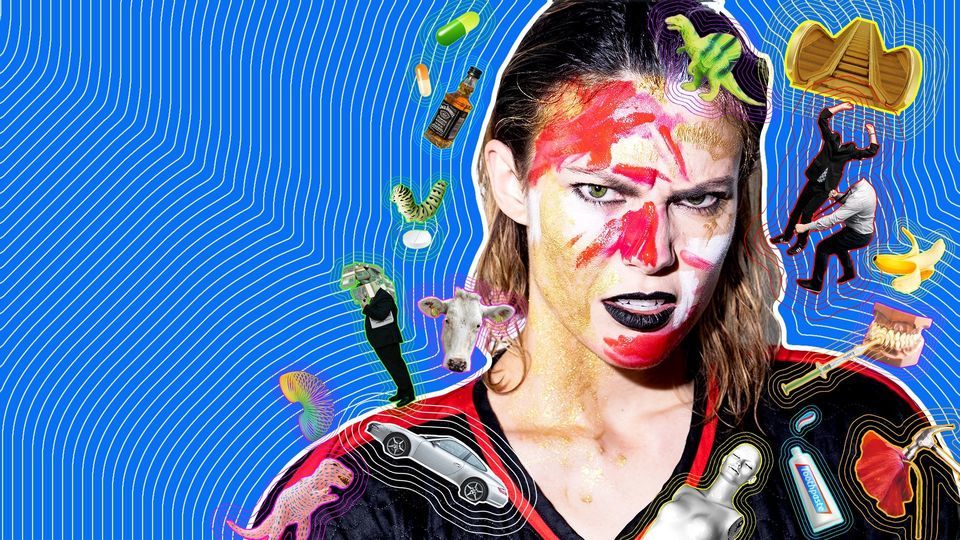 “We’re probably really really happy right now”, the new play by Ellen Grimshaw and directed by Sarah Vickery, premiered at Theatre Works this week, in the theatre’s newly redesigned COVID safe glasshouse. With the rectangular stage surrounded by clear Perspex style booths, it was truly a pandemic theatre experience, one that I’m sure theatre historians will talk about in the years to come, something along the lines of “this was how some conducted theatre during the 2020/2021/2022 pandemic” – “oh, how fascinating”.

“Wanna laugh-cry at the absurdity of the world we live in?” the blurb reads. “This play defies categorisation, rips apart the madness of a culture soaked in ludicrous toxicities ranging from Tall Poppy Syndrome to misogyny, and violence to destructive power dynamics.”

Welcome to Ellen’s world. This quirky, almost absurd series of vignettes had me feeling like I wasn’t quite sure where I was, or what I was witnessing. Had I just wondered into some futuristic, hyper-confused, hyper-self-obsessed realm where people wore jumpsuits made out of puffed doona covers? The weirdness of it all had me intrigued.

Down below from where we sat, a chequered carpeted floor, a piano in the corner, and up above the booths, small screens, one for open captions and the other for the output of a video camera which was wheeled around on a tall tripod and used intermittently throughout the show. I felt as if I was in someone’s living room, a fly on the wall observing this ludicrous diatribe. But then maybe this wasn’t the future at all. Maybe this was just a mirror held up to today’s society. And believe me, it’s not pretty.

Although the show seemed to lack a narrative arc, it still made me laugh and then it would swiftly pull at my heart and almost made me cry. How sad the world has truly become. As a mother, I was almost horrified. How did society get to this point? Why are women so obsessed with having a boyfriend? Our society has bred a generation of youngies obsessed with attention, obsessed to fill the gaping whole within them, and nothing seems to be enough, nothing is ever enough. Maybe the absence of a narrative arc was purposeful, maybe the show was purposefully set up like this, to have the audience feel like they are aimlessly floating and that there is no clear resolution to this problem. Perhaps the only solution is empathy, at least that’s what I felt, for every time the “tall poppy” character spoke, she was shut down, abused, bashed, with the other characters applauding themselves on a job well done. How mean we have all become!

Considering the way the theatre was set up, directing this show would have been challenging, but director Sarah Vickery took on that challenge, and she pulled it off. The costumes were interesting, the music emotive with sounds placed appropriately. The project was backed by some reputable bodies including The Besen Foundation and City of Melbourne. Featuring a diverse cast and high quality acting, this show explores the hot topics of workplace discrimination, misogyny, abusive relationships, and our obsession to finding happiness. It may appeal more to a younger demographic, and it was very much told through the lens of white feminism, adding to Australia’s vast collection of white-bred theatre. But as a gen x from a migrant background did I still enjoy this show? I did.

Koraly Dimitraidis is a Cypriot-Australian writer and performer and the author of Love and F—k Poems and Just Give Me The Pills which together form the basis of her theatre show “I say the wrong things all the time”. Her opinion articles/essays have been published widely including international publications in The Washington Post. Koraly was awarded an Associate Artist residency at Theatre Works in 2020 but she does not have any affiliations with any of the cast or crew members of this show.

Disclosure: The Plus Ones were invited guests of Ellen Grimshaw.
Photos: Supplied.

Level up your gifting game with the Good Day People

Cocktails and Caviar at Poodle Upstairs